Here are some experiments with focusing the laser "beam"...

Note that these experiments were run with a very low current--almost the bare minimum necessary to light the laser. For these experiments, I decided to use the laser-diode from a DVD drive that does *not* burn discs... I have more of these drives laying around to scrap if I fry the laser while handling it so much... I'd be sad to fry another burner-diode (or my eyes).

This is the (bare) laser-diode removed from a DVD drive...

The diode's output is NOT parallel as one expects a "laser beam" to be... In fact, it's quite a bit like an LED's output... what is that, probably a 60degree "viewing angle"?

The diode's output is NOT radially-symmetrical! There's a very distinct "long-axis" and "short axis" making it oblong.

Again the output is *not* parallel. Note as I move the paper downward there is a very distinct "focal point" (roughly) where the disc should ride... (As I move it down further, closer to the lens, it becomes defocussed again). This is intentional in the design, as it allows for scratches on the disc's surface to be out of focus, and therefore not interfere with the reading of the disc at the focal-point. (More info here: physics of cd pe930103.pdf)

So we have some things to think about... If we're planning to use the laser to etch material (such as black plastic), or even if we just want to make a laser-pointer toy for the cat, we obviously need some sort of optics, (remember that first picture?). And there are some optics already installed in our system... maybe we can make use of what's there; plausibly with a little modification...

First thought: If we're etching something, it makes sense to use the focal-point in the original drive's optics... This'll be somewhat difficult, it means we've got to have *really precise* leveling/distancing with the material-to-be-cut, (just look how slightly I move that paper for it to be in--and then way out--of focus!).

With this drive, I was able to remove the focusing lens (the one that moves), with a little difficulty... 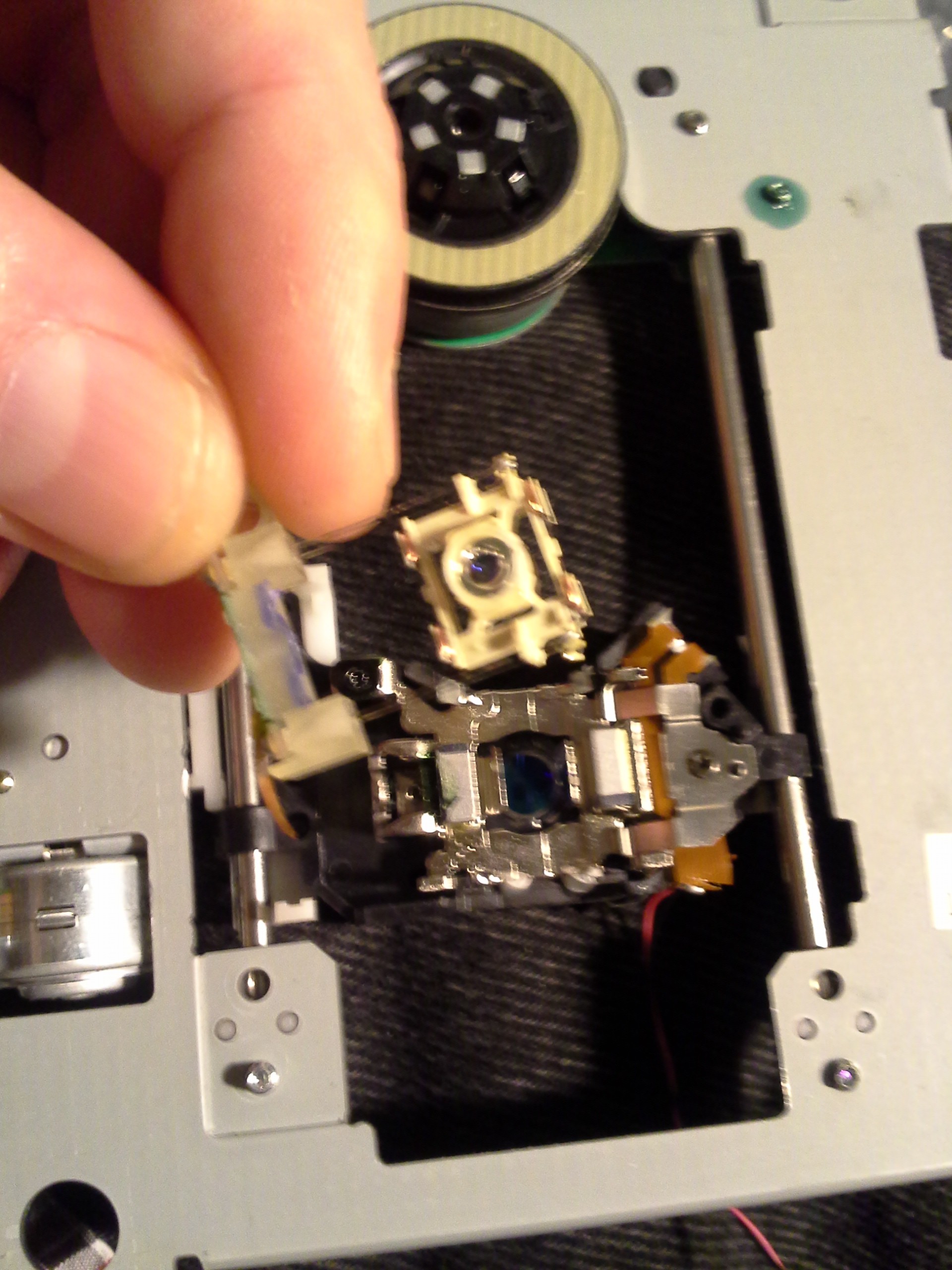 and low-and-behold directly under it appears to be the collimating lens. Nice. (I've taken apart some mechanisms which don't even seem to use a collimating lens, but maybe it's just buried way deep in all that plastic and hard to find...?) The collimating lens is responsible for turning the wide-angle "beam" coming from the laser into a parallel "beam" like we all expect from a laser. Note that's COLLIMATING not CULMINATING (though the latter seems to make enough sense to me that I had it in mind for years...). It's turning the somewhat

Great! This is pretty durn beam-like, I tormented the cat with it for a good half-hour, and it easily goes across the room. Its diameter appears to be about half an inch, however... If you're planning to etch with this, you'll be sorely disappointed. A) All that etching/cutting power's spread out over such a huge area it likely won't heat up anything noticeably. B) it's just too low-res to do much useful with besides torment the cat or point out things on a whiteboard. ;)

Now, I don't recall where the lens in the next picture came from... I think it was an old magnifying glass. I just set it right atop the laser mechanism. Since the beam coming out of the mechanism is now collimated, it doesn't matter where we place the lens in that beam... it doesn't have to be a certain distance away from the collimating lens.

(Hey, I think there's something here about the ideal focal-point of the lens... Isn't the focal point where a point-source of light should be located in order for the rays exiting the lens to be parallel? That's hard to accomplish with real-world light sources, but here we have pretty much the ideal real-world case, in reverse. The light's entering in parallel "rays" and we can find the focal-distance based on where those rays cross at a single point...)

So, personally, I think this'd make for an easier laser-etcher than trying to run the mechanism (with the original focusing lens) *right above* the material.

A) (again) it seems like it would be difficult to keep the laser travel *perfectly* parallel with the material to be cut/etched... The focus of that lens varies dramatically with only 1mm of displacement... whereas with this lens the focus varies only slightly over several millimeters of travel.

B) Having the (original) lens so close to the material being cut/etched would probably result in its "fogging up" from the smoke released by the material... And, since the laser mechanism would most-likely be facing downward toward the material, all that smoke is going to collect there... It'd be hard to put a fan there, since it'd only have 1mm or so of space to blow in...

C) I think it's pretty durn nice to be able to *see* the material being etched/cut while it's doing-so... as well as for focusing... The DVD mechanisms would block quite a bit of the visibility.

On the other hand, it'd be pretty nice to not have to use custom optics... so, we'll see.

Another consideration, maybe, is using two lenses after the collimator. One would shrink that beam down to a point (like the magnifying glass did, earlier), then the other would recollimate that point into another, very narrow, column-shaped "beam." Plausible. Then there wouldn't be much need for focusing or leveling the bed. I've heard they don't do this with regular laser-cutters because having *so much* power in a tiny beam actually ignites the air in the beam... I doubt these tiny lasers could do that, but there may be other reasons why such a narrow beam isn't the de-facto in cases like these.

Here's a link to someone's setup using the bare diode and the focusing lens: http://www.instructables.com/id/Homemade-laser-module/?ALLSTEPS

It's a pretty good setup, certainly more precise than my by-hand experiments!

I'm not sure how he managed to get a "beam" out of it, I certainly wasn't able to in my experiments. My theory is that, as I said earlier, I have taken apart some drives that don't seem to have a collimating lens... So, then, maybe the focusing-lens on these drives takes that into account...?

(Thanks @frankstripod for a bunch of ideas in here!)

Finally got my laser goggles... I'm gonna keep an eye on that log and all its laser stuff glory (everything is sooo green now :D )

Hah! Right on :) If you come up with anything you want to share, certainly please do! Join the crew!

@davedarko  Where did you get your goggles from?

http://pages.ebay.com/link/?nav=item.view&id=371160880669&alt=web I just read the Somewat cryptic text - seems to be not so much suited for bigger lasers? My converted chinese isn't that good ;)