DC Motor Revisited + Another one [laser] bites the dust [beam-focussing]

Mighta crammed too much into this one... Click that Read-More link! 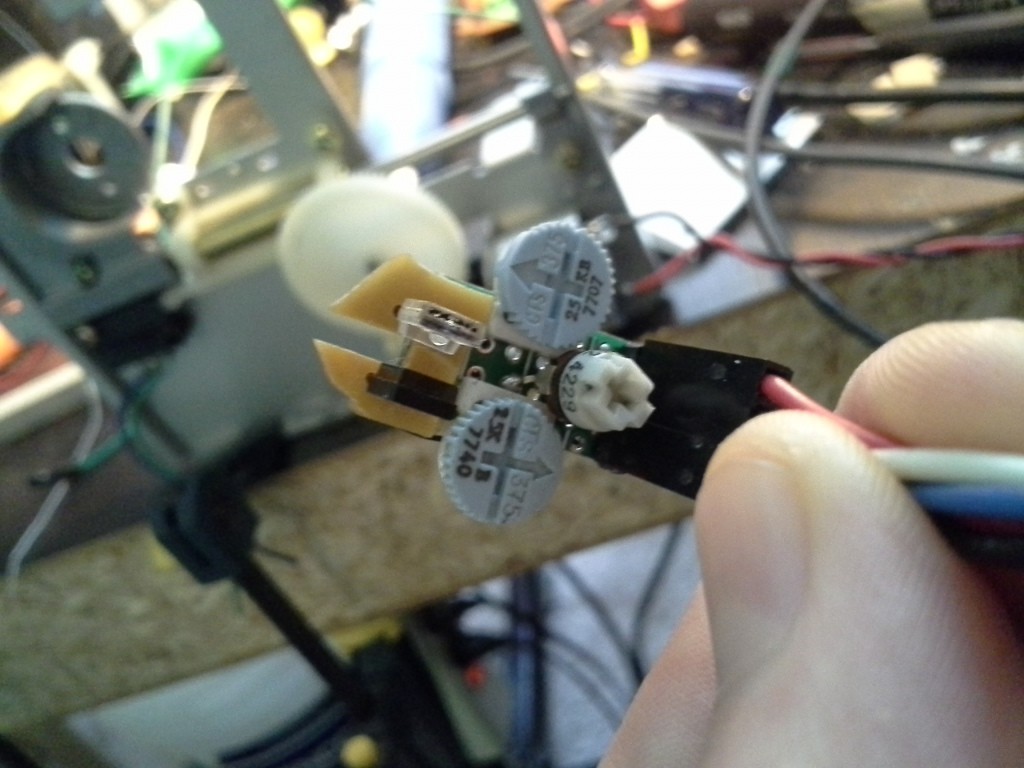 One of my drive-mechanisms is quite large and sturdy... If I recall correctly, it came from an old stereo-component CD player, and is built like a tank. I think it will make for a good axis, despite having a DC motor instead of a stepper. 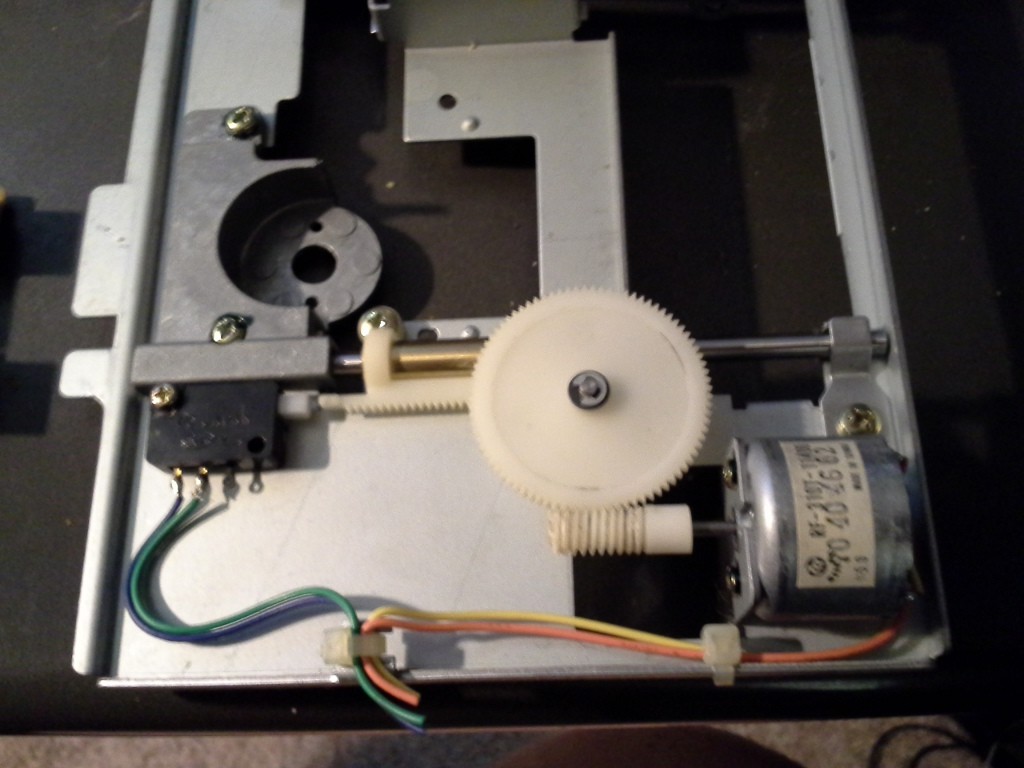 And look at all that space between the shaft and worm-gear... Perfect for attaching an encoder.

I've stripped an encoder wheel, opto-electronics, and frame from an old ball-mouse. 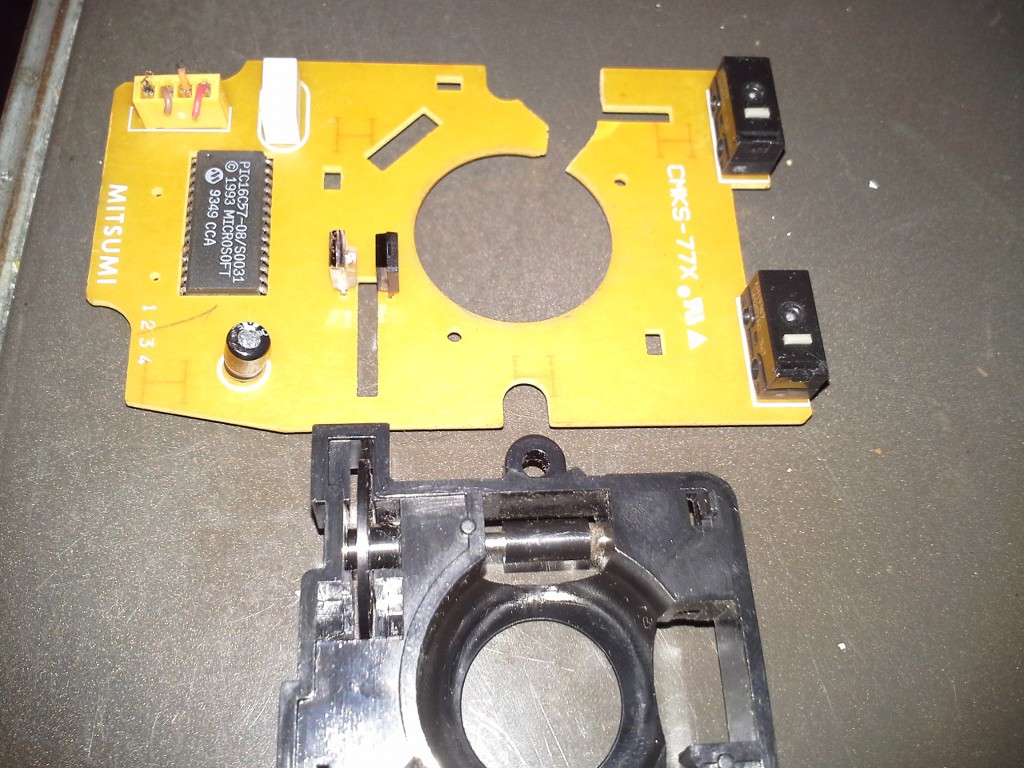 And, with a little work, was able to attach it to the carriage mechanism... 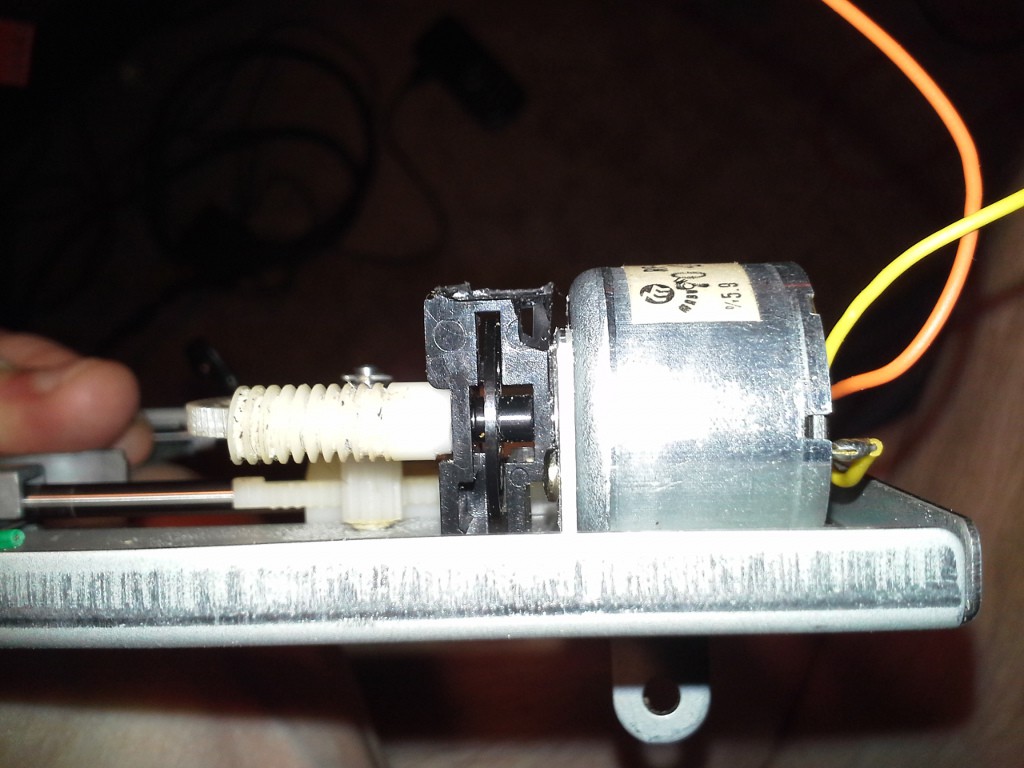 (Hey, if you've got to do a little bit of lathing to the worm-gear, consider the fact it's already attached to a lathe of sorts! 12V on that motor and a file!) 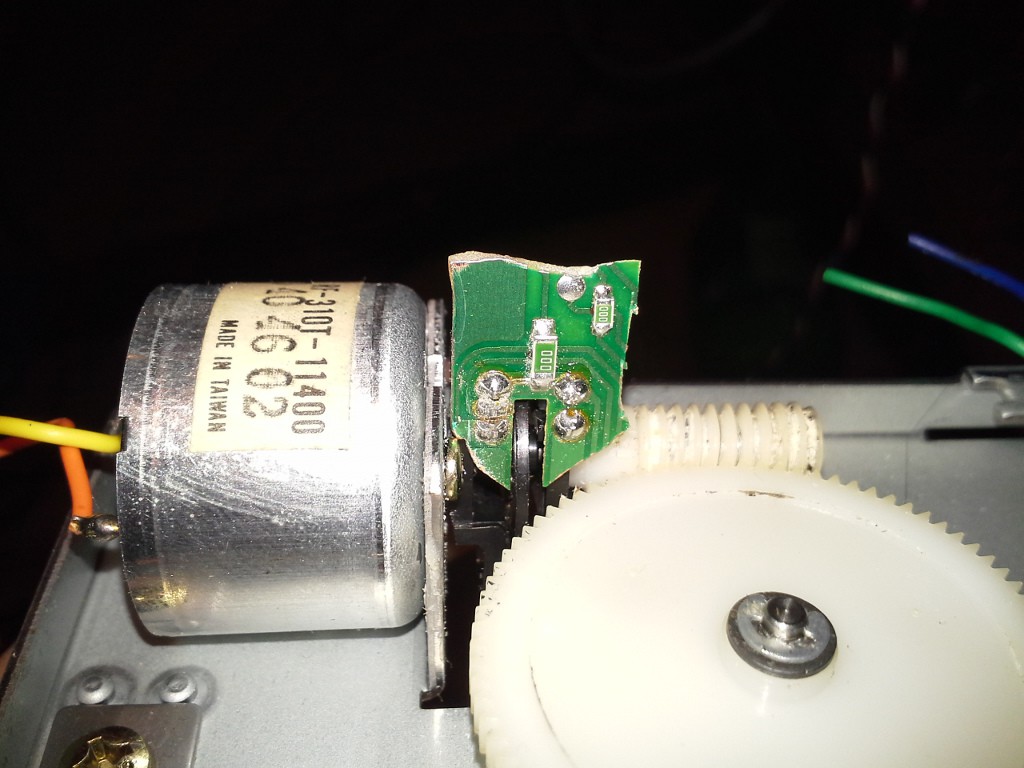 I used a portion of the original PCB for structural support, and soldered my own circuit to that... 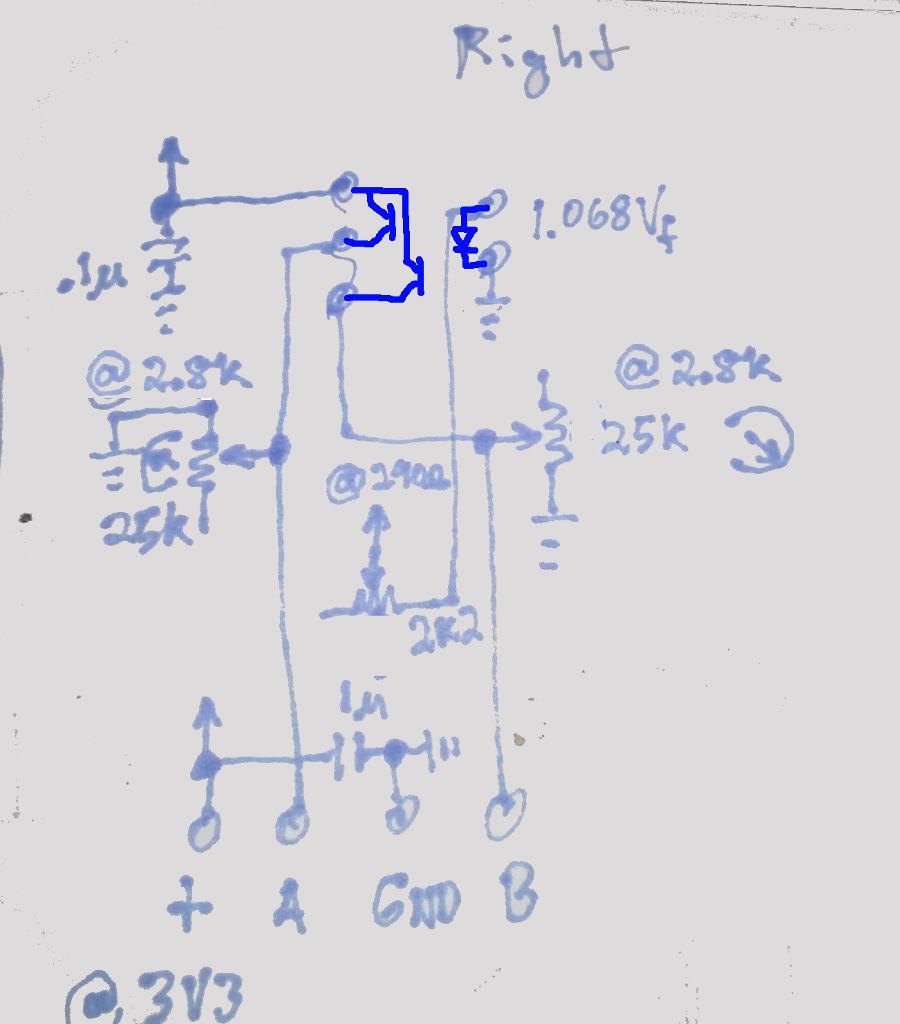 This is for a 3.3V system, the original circuit in the mouse was tuned for 5V and had the two axes' LEDs in series. Also, even at 5V, the original circuit didn't work well with high-speed rotation, the signal swing diminished dramatically. These values were found by adjusting the pots while 'scoping, with the motor running at full-power. 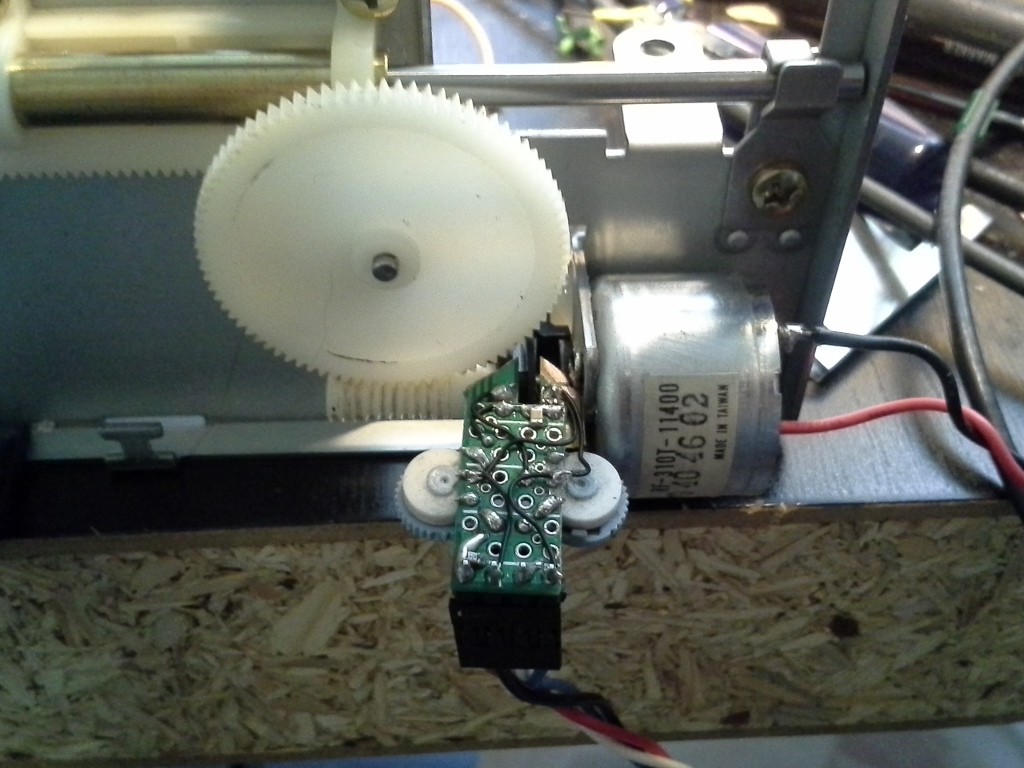 It seems we can get pretty high accuracy out of this motor... Unlike the cheaper "hobby"/"toy" motors experimented with earlier, this has much "softer" poles. So, running it at a very slow speed, we see that there's very slight "snapping" action. And, geared-down as much as this is, that snapping is completely negligible. Now, the other factors have more effect; e.g. backlash... I haven't measured, but it looks like about .5-1mm of backlash. I think this can be easily overcome by attaching a spring to the mechanism. Of course, the force will vary the longer the spring is stretched, but that's already compensated-for via the encoder and feedback-loop. Alternatively, maybe I'll use this for a Z-axis, where weight will be the key-factor in keeping it positioned... This thing's sturdy enough, it could probably hold a dremmel.

In this video, the speed is set very slow, but I explained it poorly, it's neither trying to maintain speed, nor... what'd I say, change in position over time (which is speed)... It's set to move a certain number of encoder-ticks in a certain amount of time. If external-loading causes it to slow-down, it will make up for the lost "ticks" as soon as it can. Thus, overall, it will travel the expected distance, as long as the loading isn't more than the power-supply voltage allows. This is important, (not speed) in most CNC-type things... ( #commonCode (not exclusively for AVRs) has motion-control code which is designed for positioning along multiple axes, if one axis is more heavily-loaded, it will slow the others such that the overall motion travels along the desired path, regardless of varying loads).

I don't particularly like the idea of having to focus the laser onto the surface being cut... What'm I supposed to do, eyeball it? Hah!

So, I thought I'd see what kind of beam I could get by using the pick-up/focusing lens in reverse... The original beam (coming from the sled, with its focusing-lens removed) is a collimated beam, but it's nearly half an inch in diameter... not too useful. The focusing lens has a focal-point of something like 1-2mm (roughly the distance to the disc's surface), so I did some rough sketches that suggest a pretty narrow beam could be formed by inserting a lens (magnifying glass) with a much longer focal-length, and matching the two lenses' focal-points. 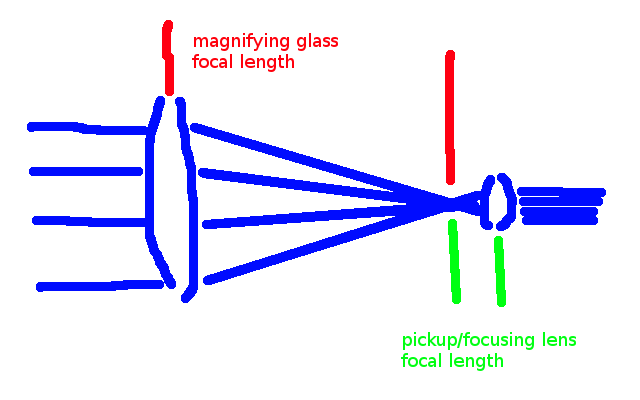 So, it seems to me, the ratio of the magnifying glass's focal length to the focal-length of the pickup/focusing lens determines the ratio of the input beam diameter to the output beam diameter... Since the pickup-lens has such a tiny focal-length, it should result in a tiny output beam. Further, since the magnifying glass has such a long focal-length, it means the rays output by it have a pretty shallow angle and won't have much chance to diverge between the focal-point and the pickup-lens. It also seems to me the entirety of the beam will enter and exit... none of it will be lost around the edges of either lens. (Note that in the DVD drive, quite a bit of the wide beam just reflects off, or even completely bypasses, the pickup-lens's focusing mechanism... seems there's a lot of lost light in the original mechanism: between the wide angle of the laser-diode and the distance from the collimating lens, the light that misses the focusing-lens, and it's also polarized, doesn't that block a tremendous amount, as well? Might have to remove that polarizer...)

Anyways, experimenting, still, with a regular DVD (not DVD-Burner) diode:

Powered-up, almost got it aligned, then the diode burnt out. My diode grave-yard is getting quite large. On the plus-side a "burnt-out" laser-diode still glows (quite dimly, and requiring tremendously greater power), so I was able to continue with the experiment.

The result? The dot is definitely larger than it is at the focal-point (duh), but it's still quite small. Maybe it'll work. OTOH, now that I think about it, if the focal-length of the pickup-lens is, say, 2mm, then that means the equivalent (or better) "beam" diameter could be achieved over a 4mm distance (2mm from either side of the magnifying glass's focal point) without the pickup-lens... That sort of manual-focus is surely achievable by-hand, even if the surface is wonky. So, that's something to consider. (Also, does the difference in travel-distance from the waves at the outer-diameter vs those in the center traveling through the system affect the output beam's coherence?)

Also, thoughts on the bipolar-stepper motor microstepping strength-improvement question... I think I get it, but I'll save it for another log-entry.