An open-source minimalist 68020 based single board computer

So, after going through a ridiculous amount of documentation, I had to resort to a handful of schematics for 8-bit port cards which show that D0-D7 on the interface, whether UART or SCSI or network, are connected to D8-D15 on the VME bus. The schematics that I have seen would indeed work with the diagram provided on my prior log entry. At least I have a path forward now.

The next design phase is relatively straight forward. I have two 6U prototyping boards which will be used for wirewrapped versions of my main CPU board as well as a simple FT245 UART interface card. The UART is just to verify that I can get the VME signals all working as expected. Once the UART is verified to work, it will be moved to the main CPU board and the prototyping board will be cleared up for development of newer interface cards.

That said, here are a few shots of the 10-slot VME backplane that I am using. This backplane is passively terminated with 330/470 ohm resistor pairs on each end of each non-daisy-chained line. Between both connectors, there are a total of 96 lines which are terminated. The serial resistance between 5V and GND at each end of each line is 330+470 = 800 ohms. 96 lines * 2 terminations (one at each end) yields 192 parallel resistances of 800 ohms each. Doing that math, that's an effective resistance of 4.167 ohms between +5V and GND. Gonna need over 1 AMP just to drive the backplane. :)

When I first obtained the backplane, I was shocked by just how heavy the thing was. As I looked it over, I started to notice even more interesting traits. The resistor packs are all socketed. I guess this is to be expected as I would have done the same. Aside from the resistor pack sockets and the 2 dozen capacitors, nothing else is soldered. The screw terminals, the jumper headers, the giant 96pin VME bus connects... each are press-fit into through-plated holes. The first photo shows this upon examination. I guess the parts can be pulled and replaced should the need arise. I'm quite happy with this board, especially seeing as I obtained it for $10. 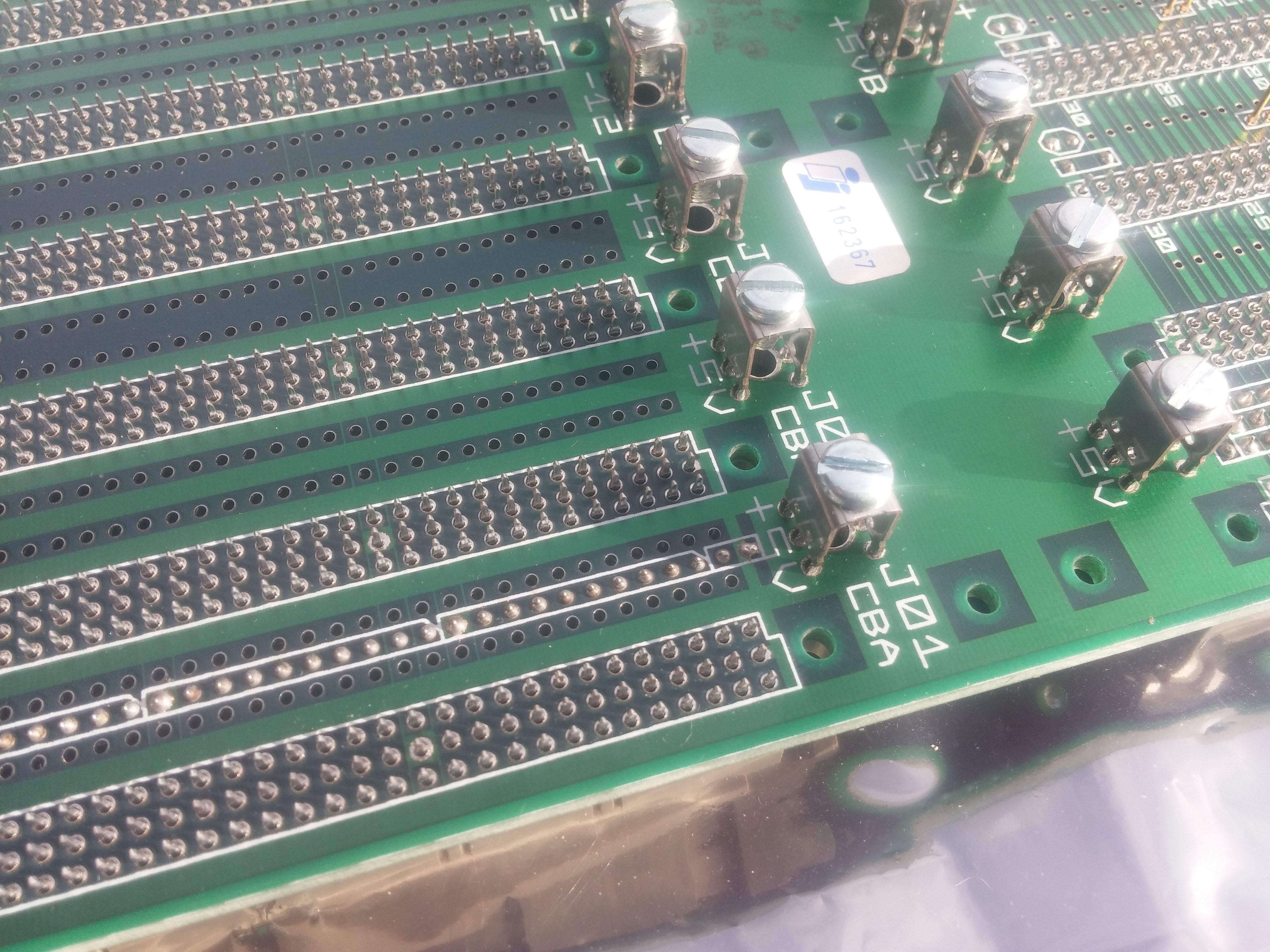 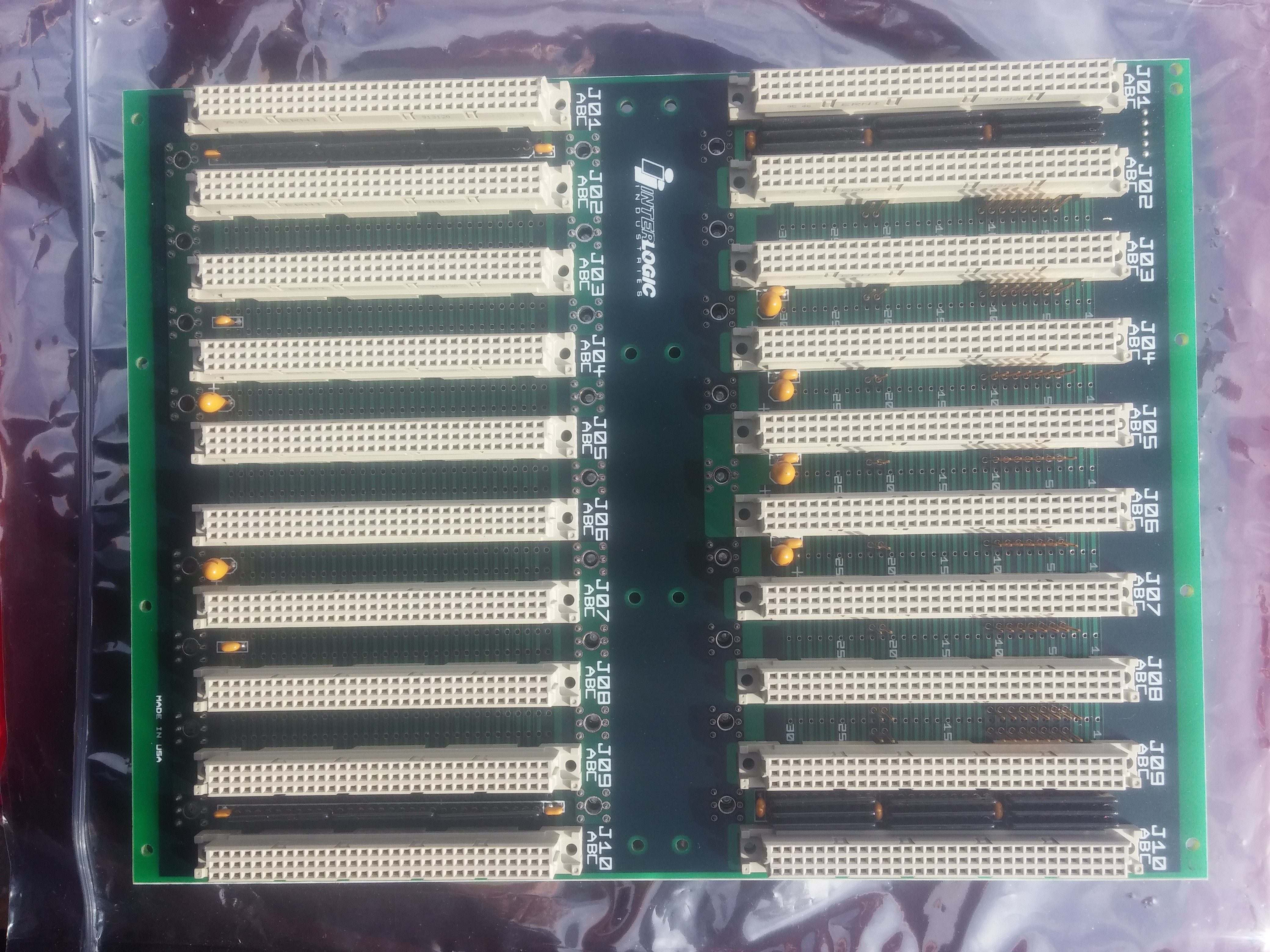 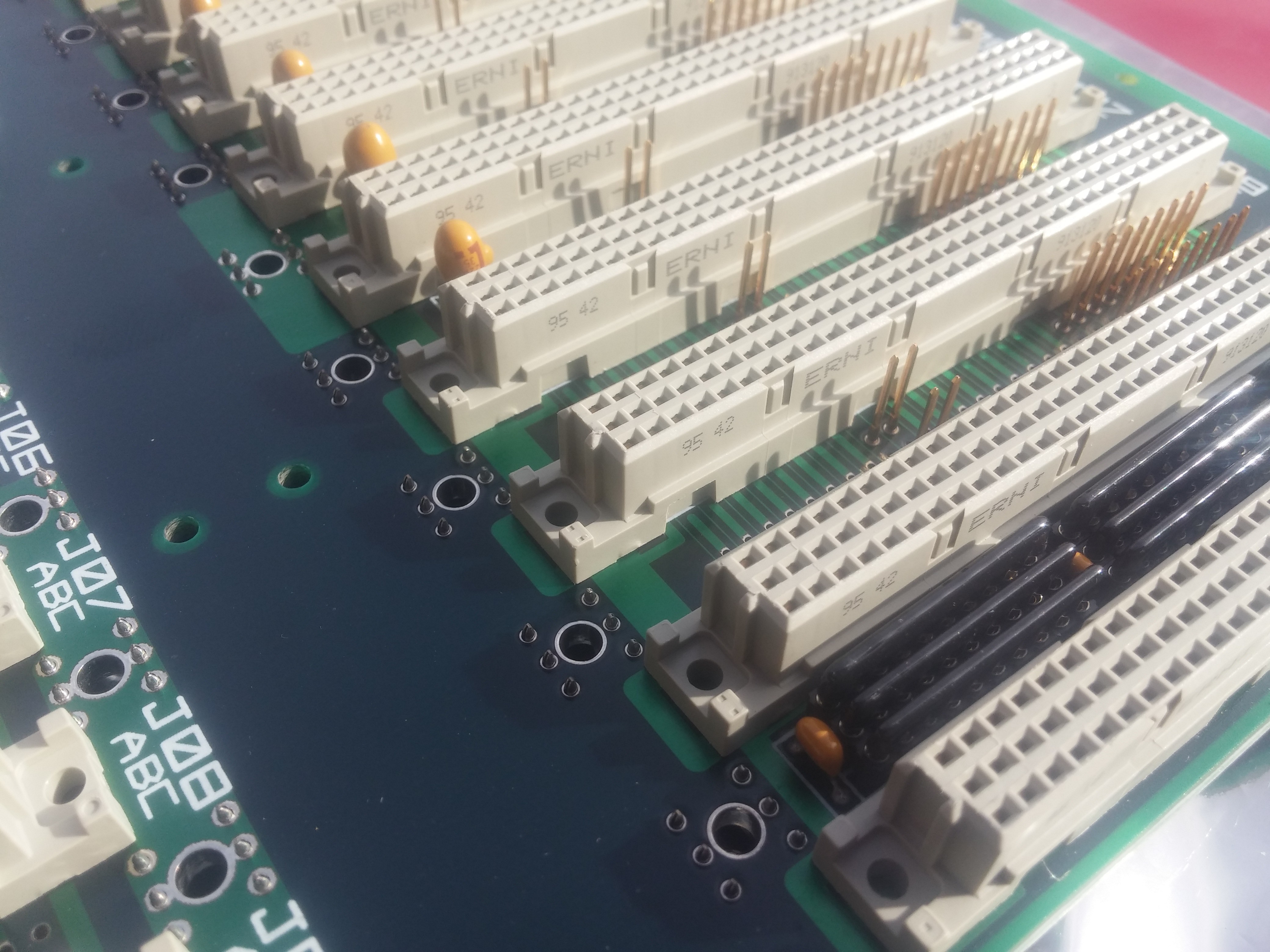 Time to bust out the books...

If I'm not mistaken, this could help you with termination : That looks like a useful part for input protection.
http://www.sigcon.com/Pubs/news/2_19.htm

>This means the diode termination will dampen the first incoming signal edge (if that edge is full-sized), but after that, whatever signal happens to reflect back to the source and return to the endpoint is never again large enough to activate the clamp. Residual reflections are essentially unterminated. On a diode-terminated line, the first reflection is attenuated, but the residual reflections do not decay exponentially over time (except to the extent that they are slowly absorbed by the driver).

>I am skeptical about the use of diode terminations for fast digital signals, *especially* so if the diodes share common power or ground connection within their package.

Typically VME terminations are on the blackplane, so you might not have a chance to change the termination scheme.  If you want to cut power, you can look into active termination.

I still learn everyday with you, guys :-)

Correct.  The VME backplane that I have uses passive termination at each end of the bus with socketed 470 ohm/330 ohm resistor packs.  I could easily roll my own board to plug in to the sockets, but it is probably too much of a hassle.  I really don't mind if the backplane is going to gobble up 6-7 watts of power with passive termination.

Initially, no.  Eventually I have use for 4 slots, plus the CPU.

If I ever manage to get a flavor of linux up and running, I'll be happy. I understand that I have a mountain of work ahead of me, but I'm in it for the learning.

that's a LOT of slots ! are you considering populating them all ? :-)