I have a few projects going on that require reverse engineering the command stream between different chips. For example, in my eeColor Color3 project, there is no programming documentation of the I2C registers of the Silicon Image SiI9233.

So one way or the other, I need to probe the I2C bus of this chip.

The good news is that the chip has a TQFP144 package which means that the pins are out in the open. The not so great news is that TQFP pins are spaced 0.5mm away from each other.

My initial plan was to buy some very small probes that can connect to those pins. The second plan was to solder wires on the pins.

In the end, the second plan worked out great and was completed long before I could try out the first plan, but since the wheels of the first plan had already been put in motion (I had ordered the probes), I might as well share my experience with those little probes.

If you want to go the high end route, you go to Pomona Electronics or ProbeMaster.com where you’ll find a number of options.

A good example are these SMD grippers. I’ve used them at work. They are spec’ed to grip pins that are 0.5mm away from each other. They also cost $39 per gripper. Ouch.

Having used similar of these grippers as well, they are clearly of lower quality than the first ones. If you absolutely need these kind of probes (and your employer is willing to pay for them), just spend the money.

But for a hobbyist, they are too expensive.

Much cheaper, $5 each, are these Pomona grabbers on Adafruit. They seem to be an excellent choice for SOIC packages, but are probably too big for my 0.5mm spaced TQFP144 pins.

So let’s get over to AliExpress and see what’s available.

You’d expect there to be plenty of alternatives, and you’d be wrong. I may have been using the wrong keywords to find the right product, but the smallest grippers are for SOIC-type packages (which have a pitch of around 1.2mm.)

Until I stumbled on the Micro Chip R/W Clip. Surprisingly, they are marketed as a tool that allows you to reprogram a car remote control key IC. Including shipping, they go for about $15. $1.5 per probe, not bad.

3 weeks after ordering, the following box arrived at my door: 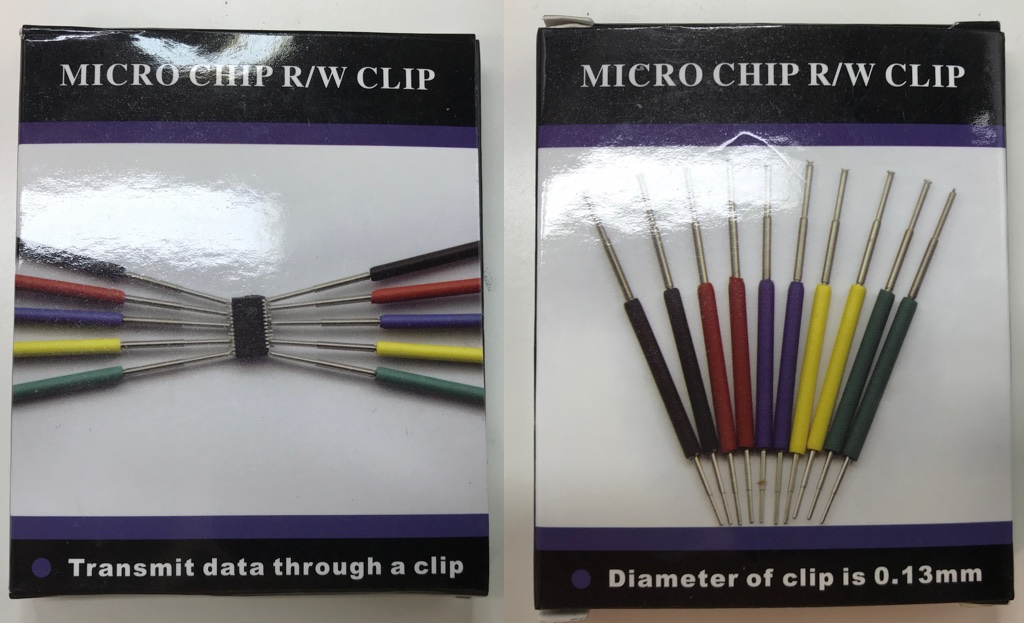 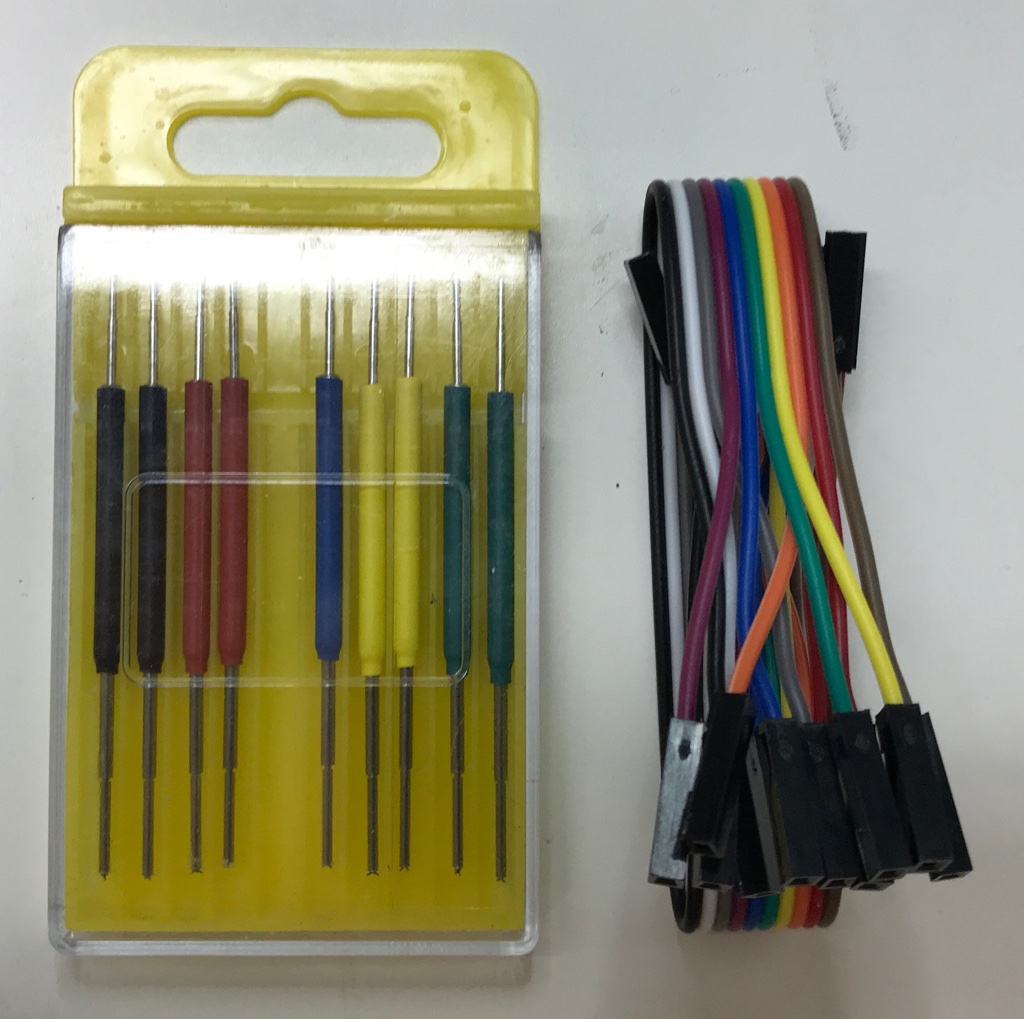 The grip of the probe is surrounded by a long and a short side. The long side is the one where the clamps will come out. The short side can be pressed in to push the clamp out. The metal of the probe has a transparent plastic layer around it:

Unlike the high end grabbers, there is no easy way to push on the short end of the probe: it’s too sharp to press with your bare finger. Instead, you need to plug in the black connector and then press on the connector. However, even if you do that, the black connector will come loose from the wire that’s inside it. So you actually have to push on the connector and the colored wire at the same time.

It’s not super practical, but it works, as long as you have your two hands available: one to hold the probe, the other to push.

So how do they work in practice?

Here’s a small example where I connect a probe to various pins of an SDRAM:

The 54 pin TSOP has the pins spaced 0.8mm from each other. It’s clear that probing a single pin is pretty easy.

Probing 2 adjecent pins is a bit harder but it’s definitely possible as well: 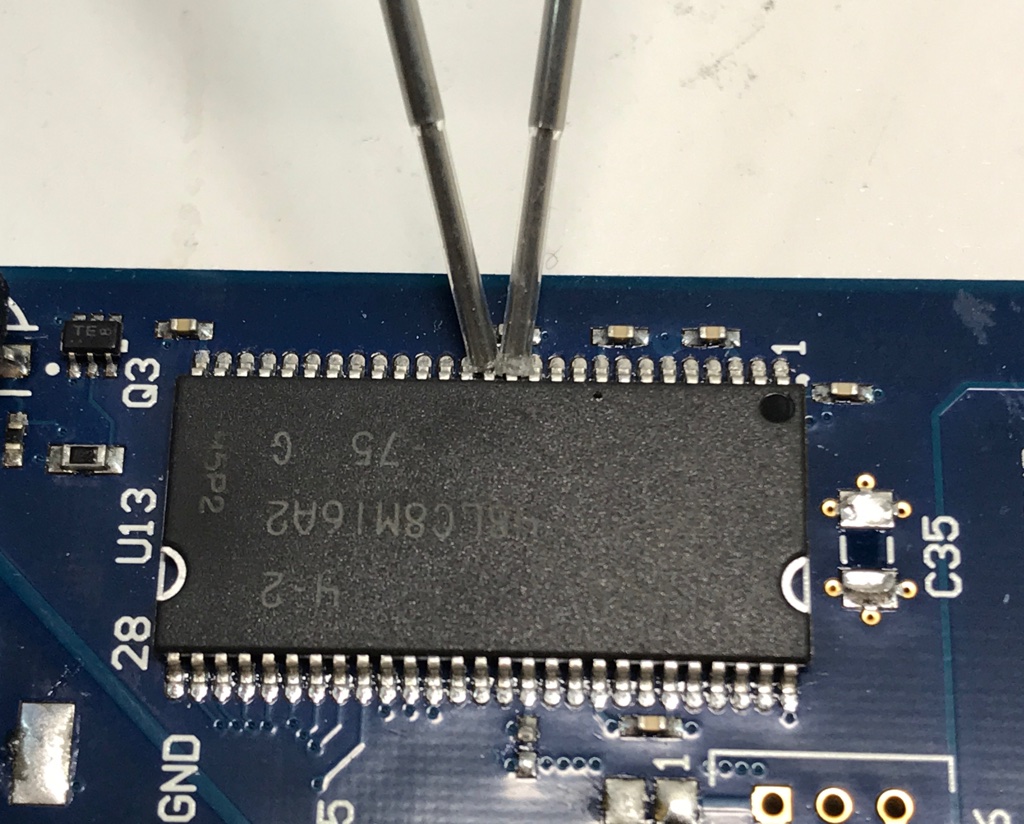 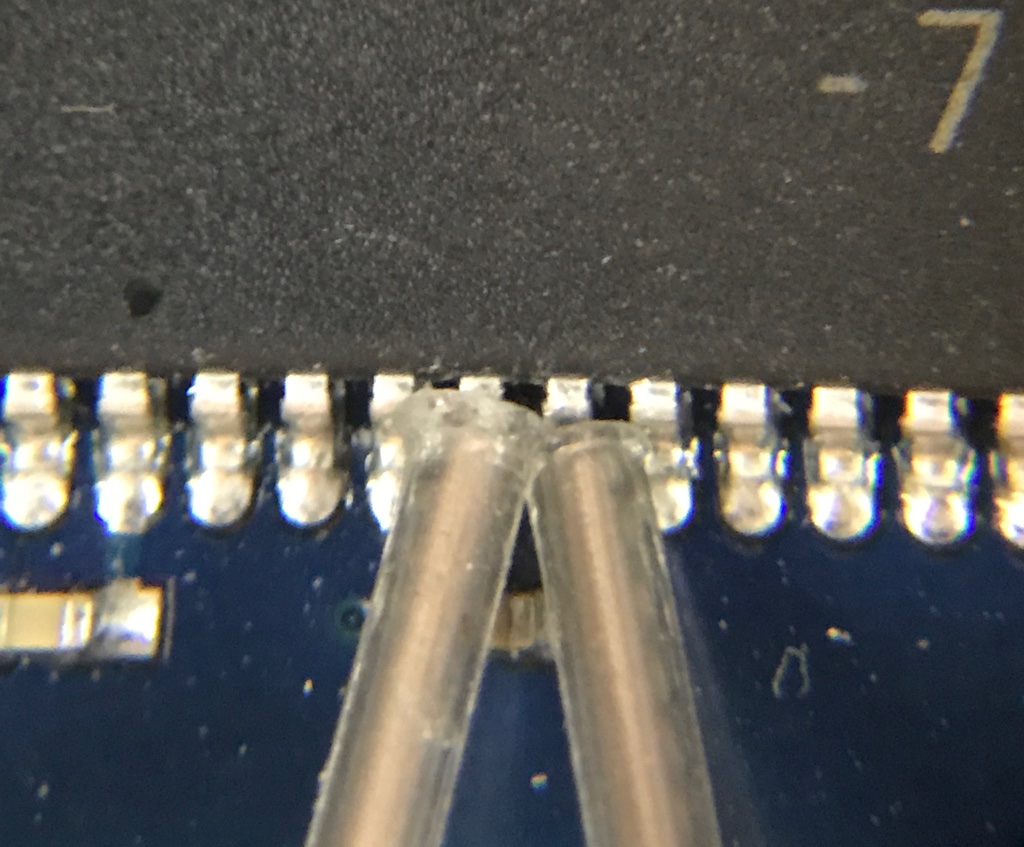 But that’s about the limit: the probes themselves as just too wide reach 3 closely spaced pins.

Finally the case that started it all: probing an I2C bus on a TQFP 144 package.

It takes a little bit of effort, but probing a single pin is very doable: 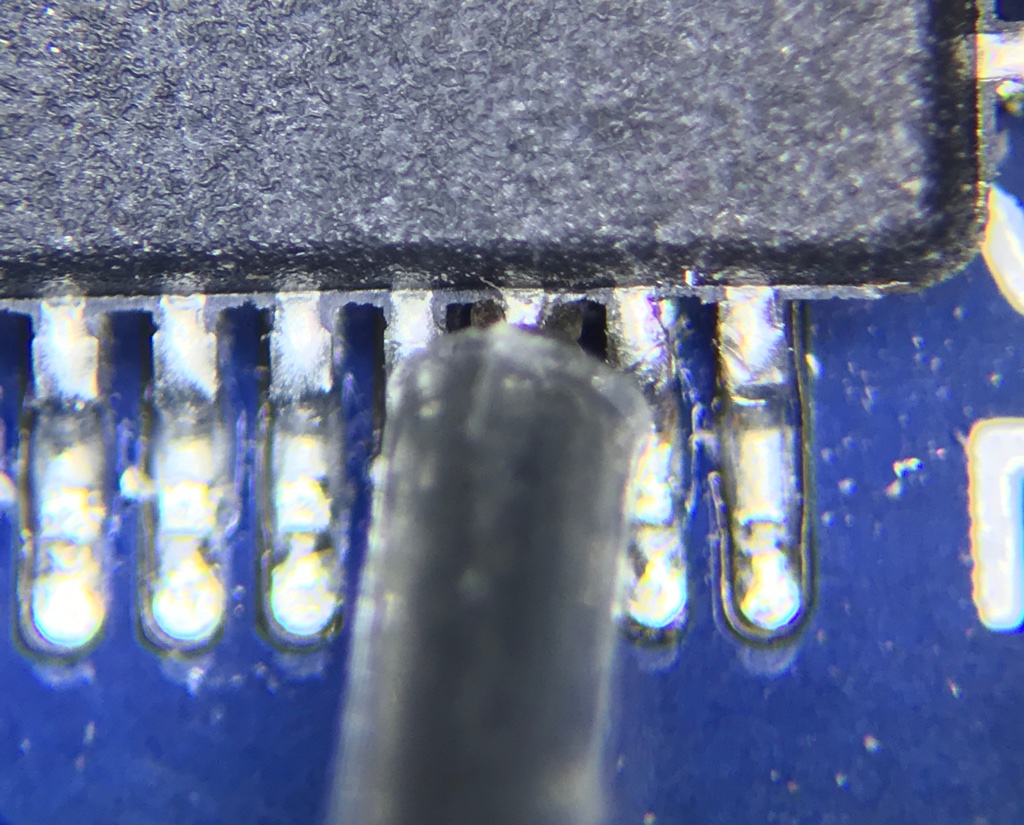 But that’s where it ends. If we zoom in a little bit more, we see the grabbers of the probes marked by the orange rectangles: 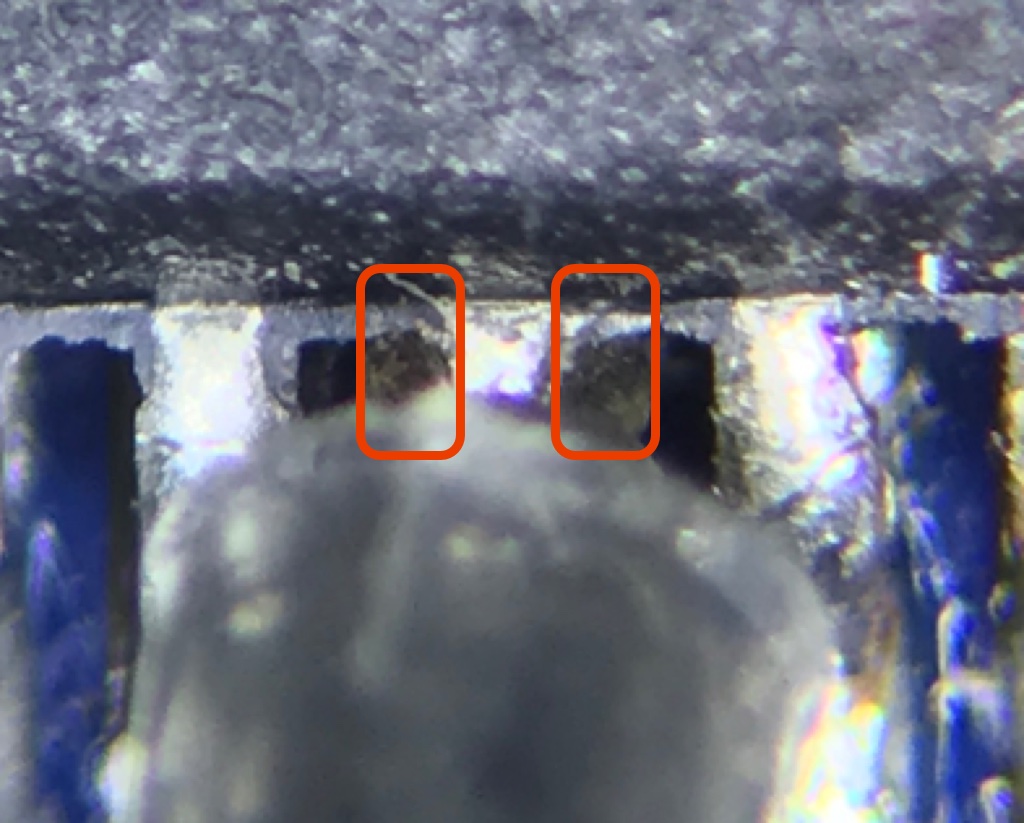 It isn’t encouraging: the gap between the grabber and the next pin seems to be narrower than the width of the grabber itself.

After a lot of trial and error, I was able to squeeze a second grabber next to the first one, but I was never able to do so with the two making contact. And since the I2C pins were right next to each other, there was no way to probe them at the same time with these grabbers.

The probes are cheap and they are small enough to grab isolated pins on a TQFP144 package or pairs, adjacent pairs of a TSOP. You’re out of luck if you need to probe adjacent pairs on the TQFP144, which made them useless in my case.

If you have the tools (solder iron, microscope, very thin wires), soldering probe wires is much more effective solution, with the additional benefit that the measurement setup is far less fragile.

That said, I’m happy to have these probes in my toolbox. They’ll be useful one day.

(A backup version of this log can be found here.)

In the lab: Bausch and Lomb StereoZoom 4 with Phone Adapter