A quadcopter flight controller based on the Arduino nano

Instead of buying all the mechanical parts to make a quadcopter I was given a frame with the motors, props etc. (however if this works ill use much nicer hardware and make a new one) but no flight controller or remote. For the flight controller I used an MPU6050 accelerometer + gyro and and nRF24L01+ radio all hooked up to an Arduino Nano which would do all the magic. For the transmitter another nRF24L01+ radio a joystick and for the throttle a pot again all centred around the Arduino Nano.

The basics of a quadcopter are really easy. A simple way to think about it is this: A quadcopter works by getting two inputs, one from the user and one from itself. The user tells the quadcopter where it wants it to be (move forward/backwards etc) the quadcopter then figures out where it is and changes the speed of the motors in order to achieve this. The following logs explain this in a bit more depth.

The two radios are very simple to use with the nRF library (link the library) however it took me about 3 weeks to get them to work because I fried all four of them and then couldn’t figure out why they weren’t working. The Arduino reads the analog values from the joystick maps them to a range of -20˚ à 20˚ and sends them to the quadcopter, same as the pot (but with a different range). At first I got everything working on breadboard and then I made a PCB for them.

The receiver simply reads an array sent by the transmitter where each element of the array represents a different parameter eg.data[1] = throttle, data[2] = roll and so on. 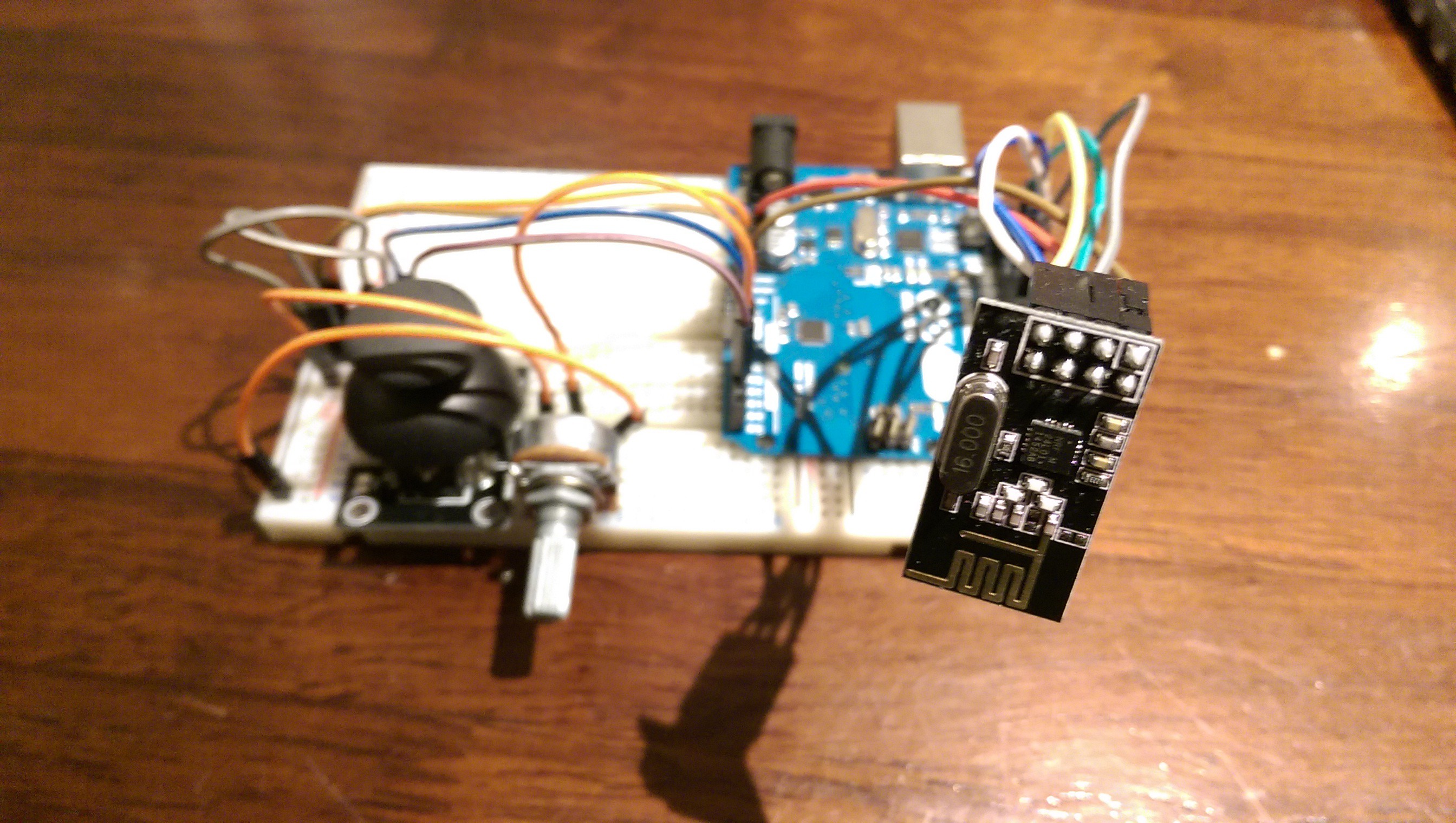 The MPU6050 is a simple 3axis IMU and it works really well. Its got both an accelerometer and a gyroscope and 3 ADC so it can capture all three axes at the same time. There is also a lot of information on how to use them, as well as many well documented libraries, so it seemed like a good choice. In order to get an accurate reading form the IMU both accel + gyro data need to be used. There are two ways of combining them:

I decided to go with the complementary filter because it’s much easier to implement and it works surprisingly well! I also advise that you calibrate the IMU from time to time and add offsets.

The complementary filter I used is the following:

However once everything works I’ll swap it for a Kalman filter (mainly so I can learn how to implement it for other projects).

Then to get the roll and pitch I used these equations:

** this equation doesn’t take gimbal lock into account but the quadcopter will never go more than 20 ˚ so it doesn’t matter.

Just to make everything look neater, I made a small PCB for the flight controller. I’ve used headers for everything so I can easily change anything that breaks, or needs updating. I made a mistake when judging how much space the IMU would need and completely forgot it has 8 pins since I’m only using 4, but ill fix all that and add a switch when I print version2. 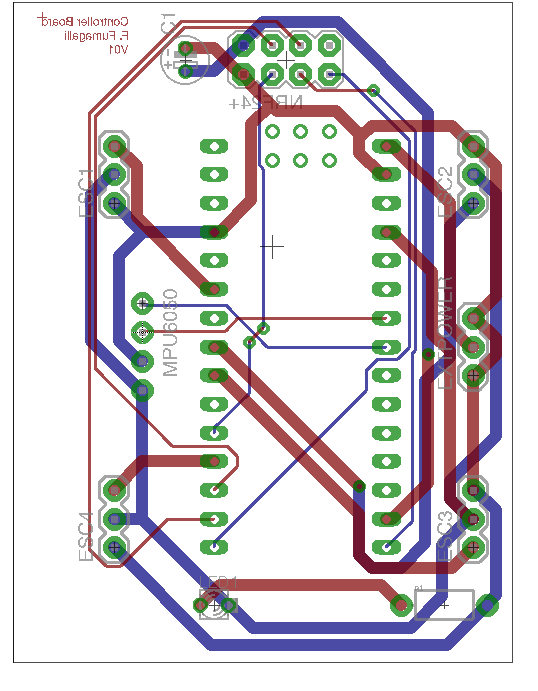 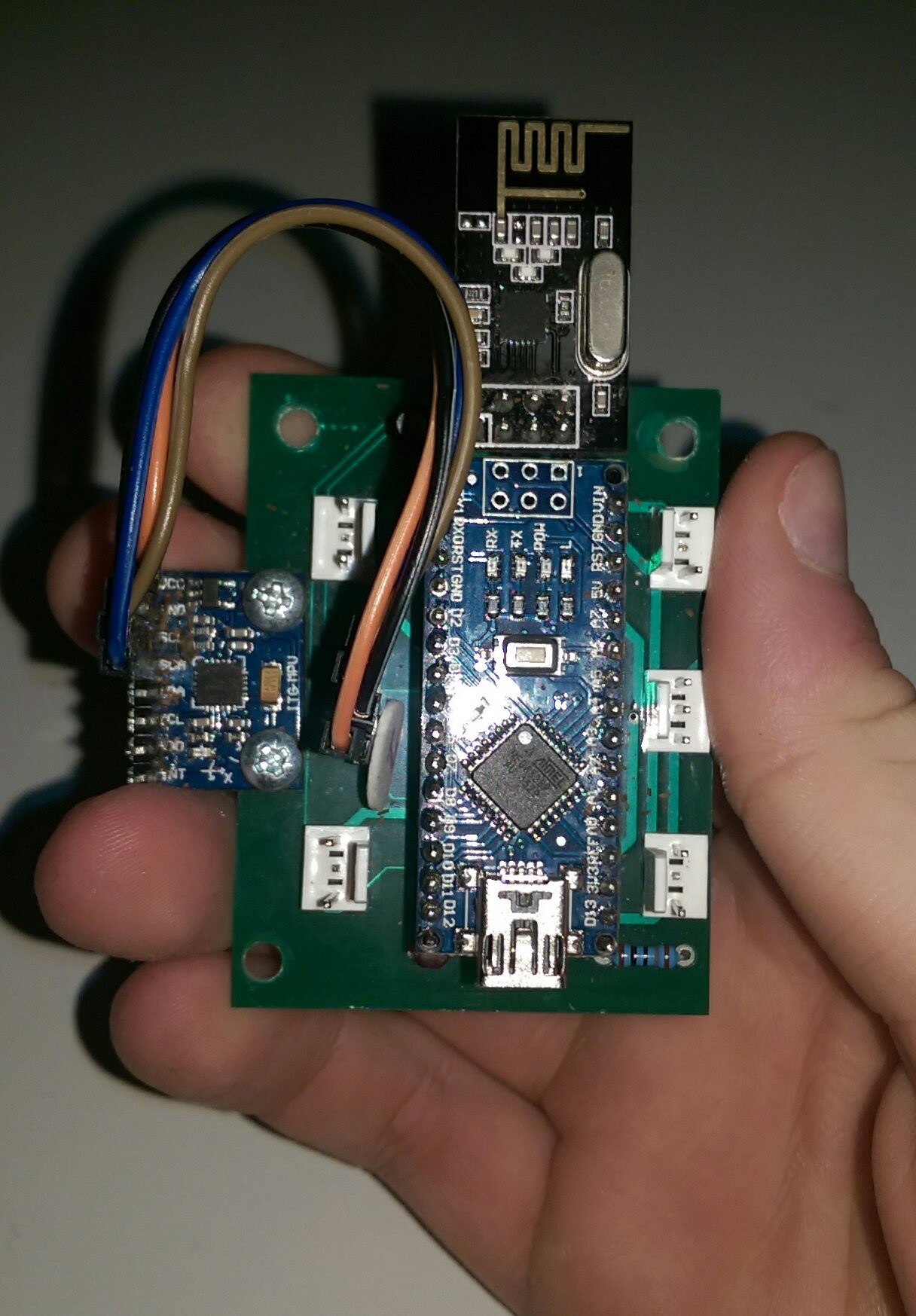 I also made a PCB for the controller, and it turned out to be terrible because its tiny. I'll definitely remake this into a proper controller which I can actually hold with two hands but I haven't done it yet since I don't really need it for now. 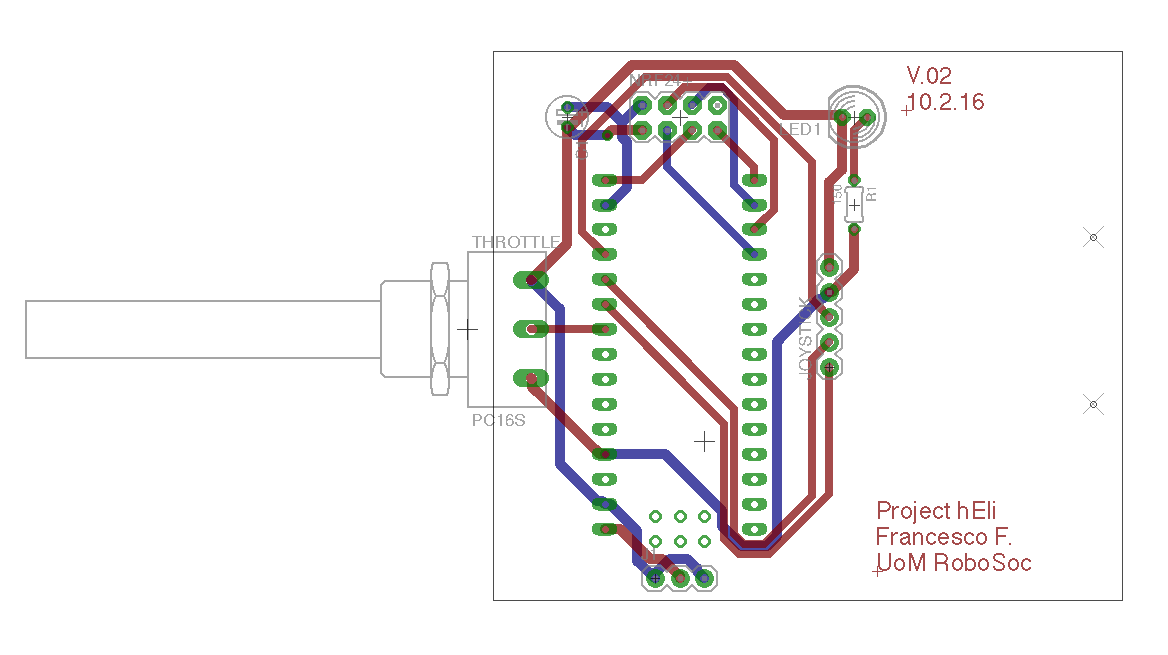 PID, which stands for Proportional Integral Derivative is the standard control system used to control quadcopters. Basically, PID takes two inputs one from the user aka the setpoint – where I want the quad to be (from the radio – in degrees) and and compares it with the angle its actually at (from the IMU, again in degrees) it then calculates an error and outputs a value which it thinks will bring the error to 0 i.e setpoint=imu data. This is an over simplification but there’s loads on information on google. I used the PID_v1 library, but I'm writing my own version for my second year project so I'll be using that one when I've finished it.

Two PIDs are used one for roll and one for pitch (and probably one for yaw but I don't have that yet). Once the PID gets the data and outputs a value the microcontroller will use these equations to correct the quadcopter.

They’re something along the line of*:

*depending on how the motors are labelled.