Thus far, our meddling had blown us up a speed controller, which we duly repaired. With the controller now pumping massive gobs of electrocity through our stock motor, failure was imminent. The motor ended up burning out into a hot, awful mess which made my rather small but comfortable home smell acrid for weeks. I'm not even kidding. Weeks. 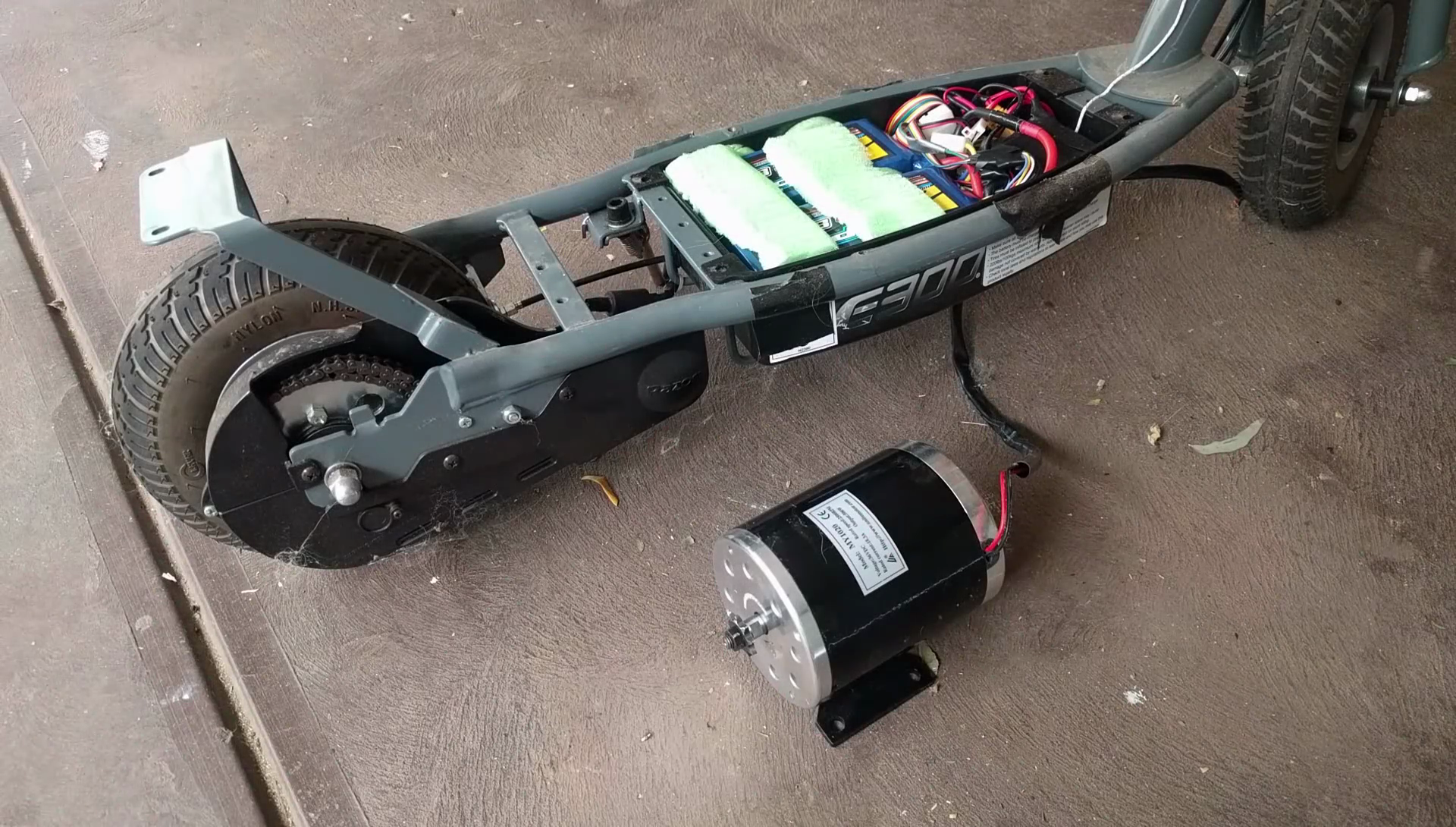 The 36V badboy I enlisted for the build from eBay.

We needed to upgrade. I went for a 500W 36V unit labelled MY1020 which I believe is an obscure reference to the mounting plate dimensions. If you know more on that, let me know. There were issues from the get go - it simply didn't fit. 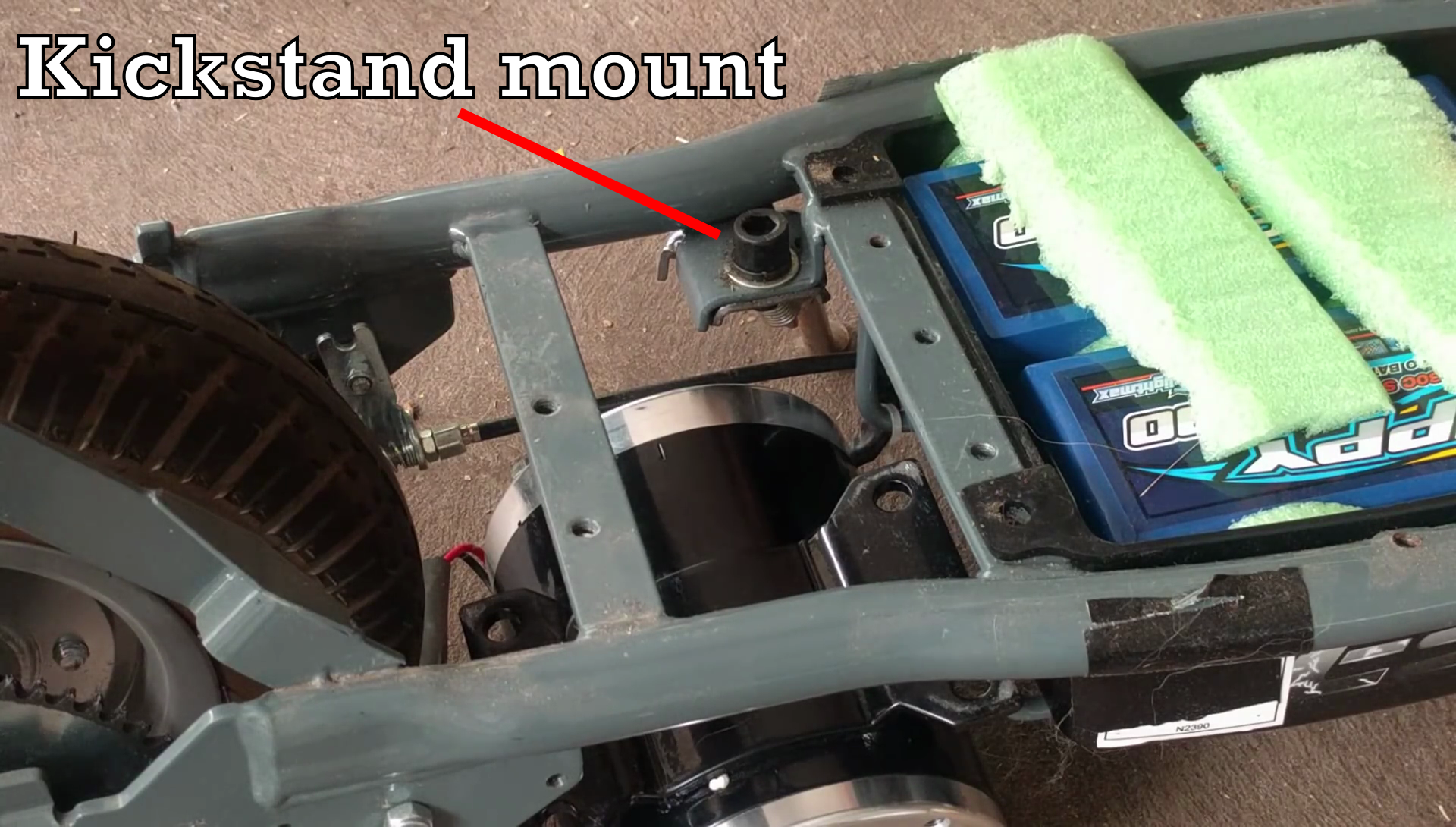 First to go was the kickstand - the mount was in the way of where FAT PRECIOUS MOTOR needed to be. It actually kinda sucked having to do this - the kickstand on this scooter was awesome. Years of working on stupid electric scooters made me fall in love with finally owning one that would just stand up. That said, I was tired of setting off with it down and then nearly stacking it when it impacted the ground at speed... 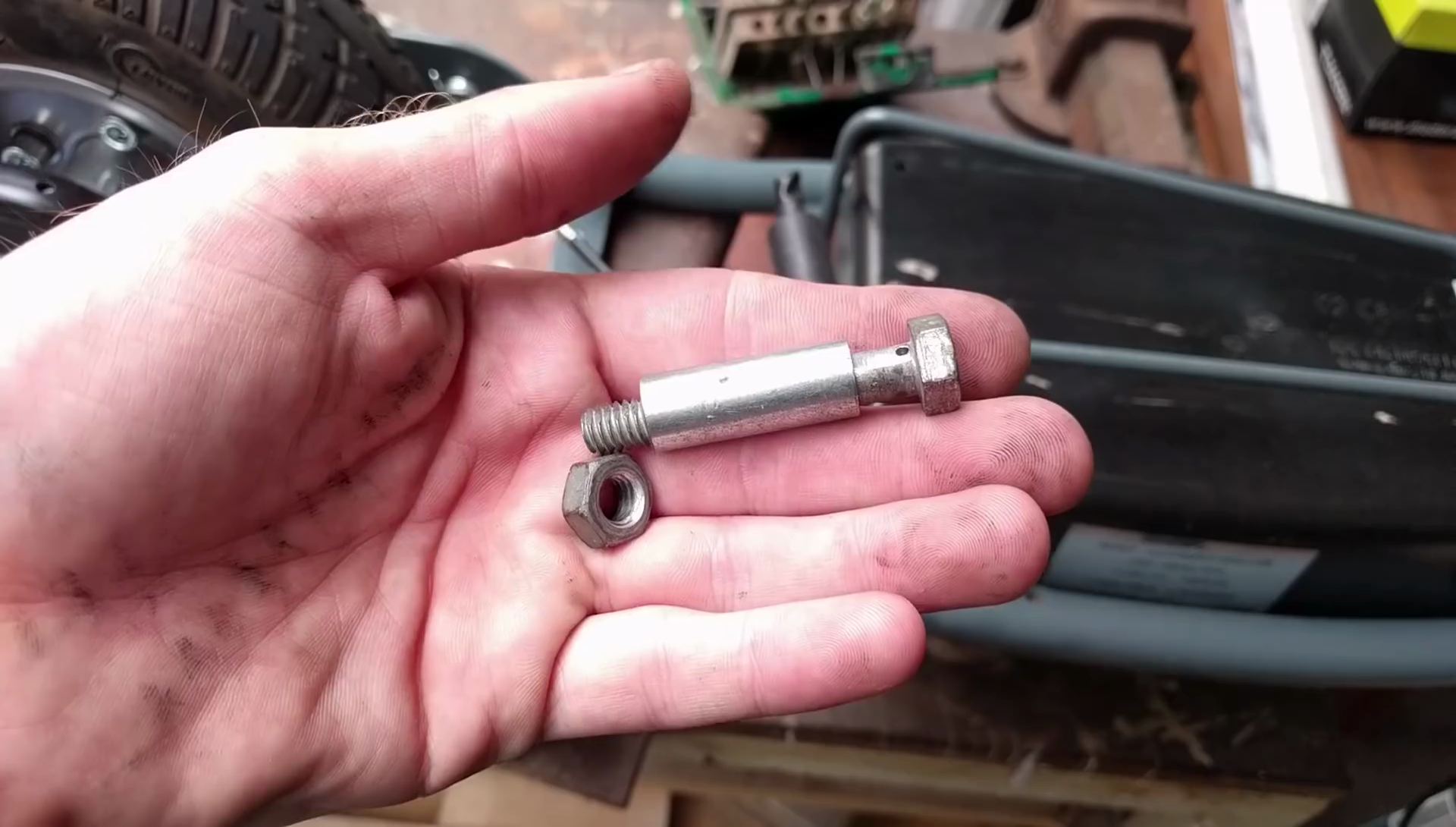 Next up was the brakes. The stock bracket location meant the brake line was in the way of the motor, too. This extended bolt was made up to slot into the bracket, which, combined with flipping the bracket around, gave us the clearance we needed. Incidentally, we'd needed to shorten the sliding tube a little. The cordless-drill-come-lathe was the way to do it. 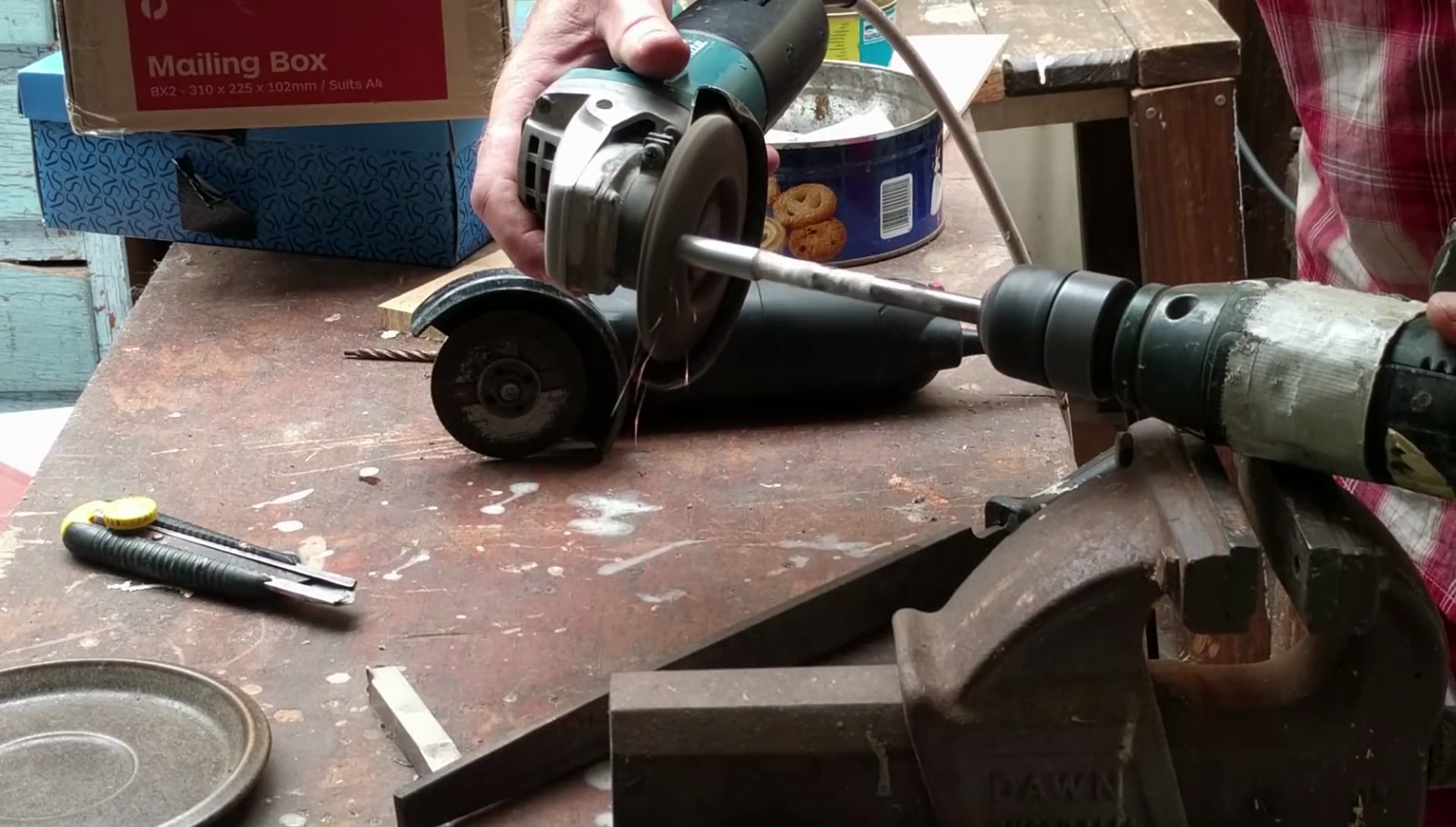 Simply chuck the workpiece into the drill and spin away. Then have at it with whatever the most relevant tool seems to be. We used a flap disc on an angle grinder. You can do all sorts of dangerous imprecise machining this way! 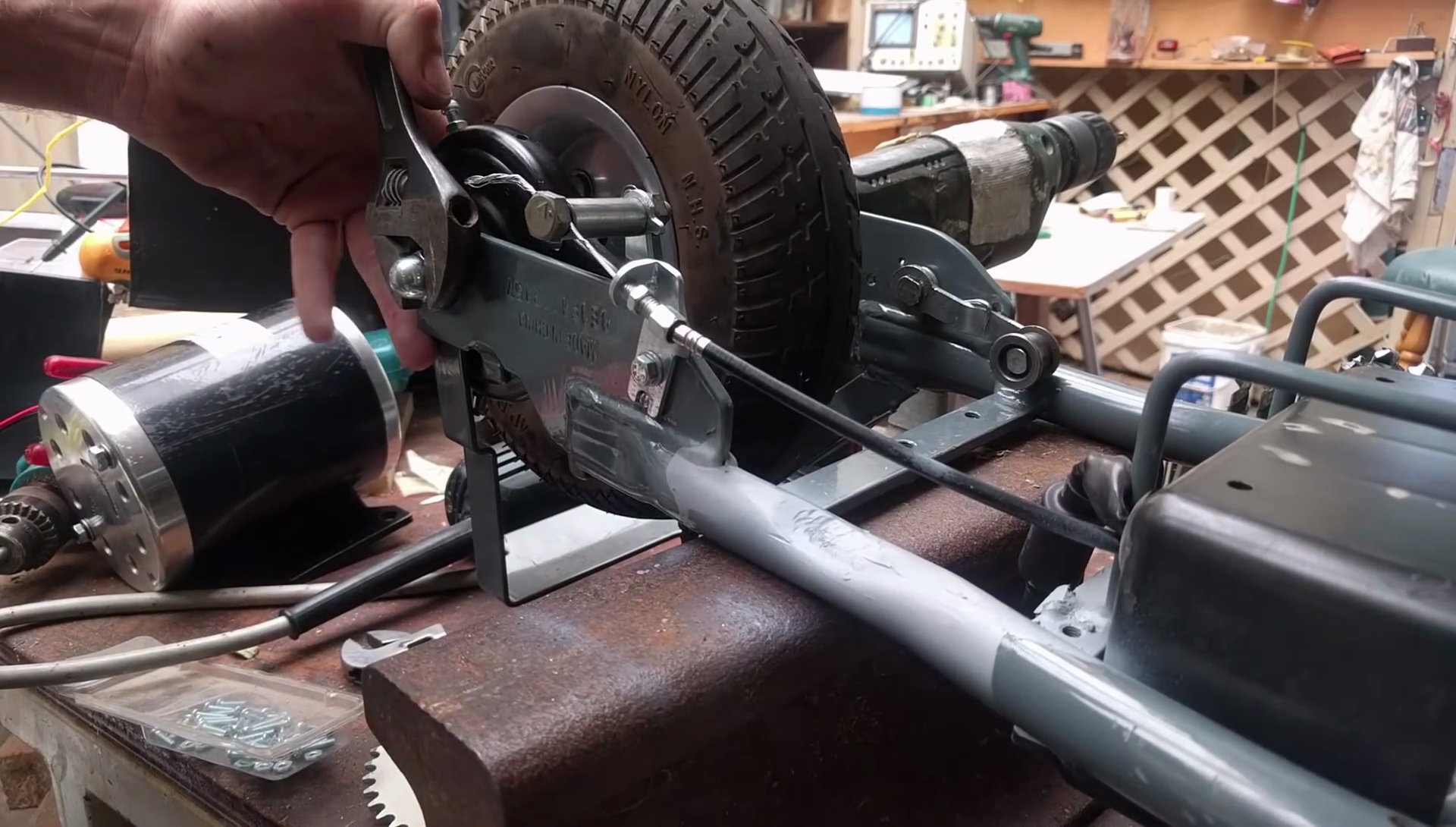 The assembled brake assembly. This reroutes the brake cable nicely.

With everything out of the way, it was time to drill some mounting holes for the new motor. Straightforward enough on one side, but on the other, we had to fab up a special bracket to clamp the motor onto the mounting rail, as the rail itself wasn't wide enough to meet up with the motor's mounting faces. An unconventional solution but it should do the trick until I can weld something up later. 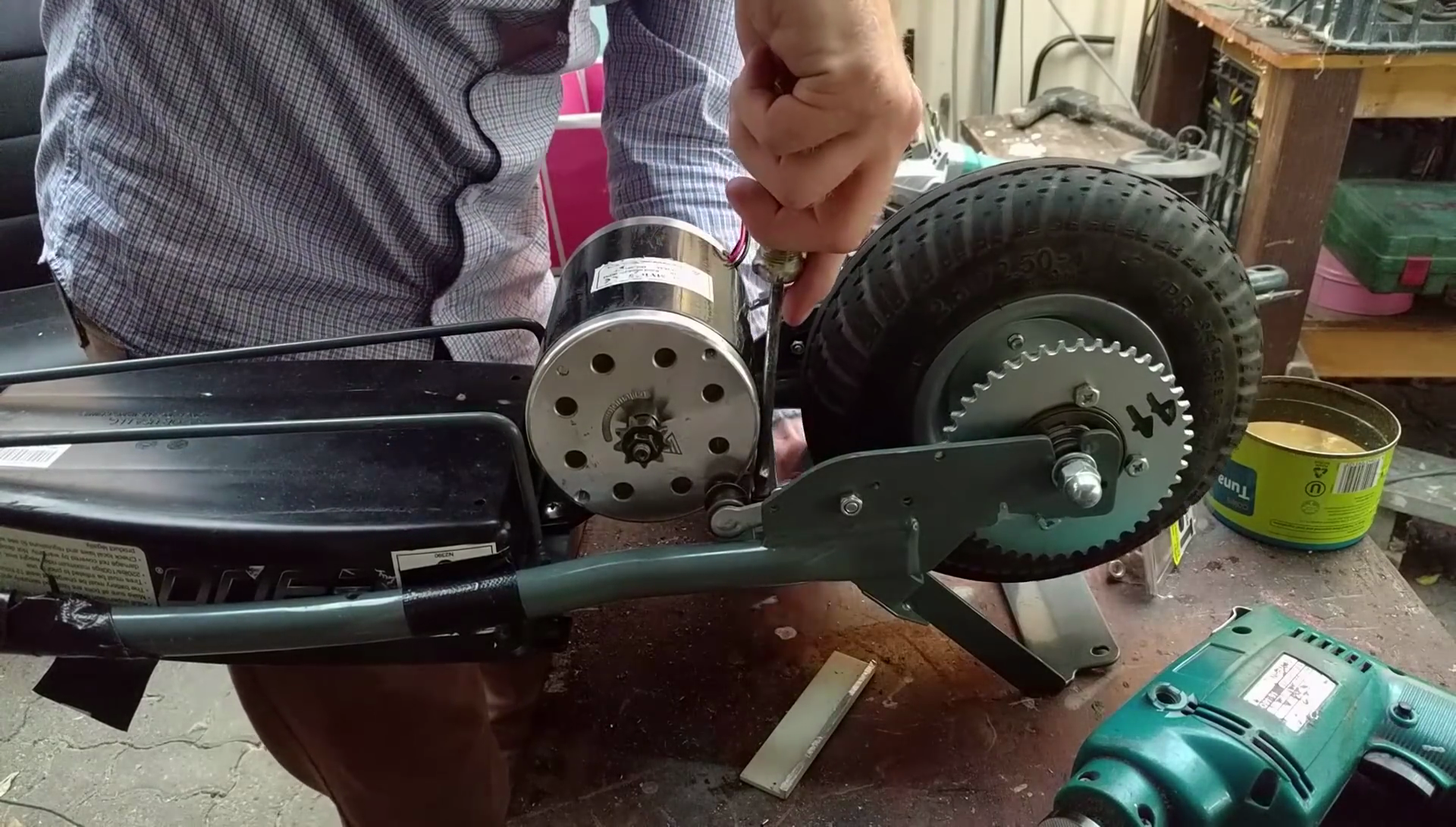 Bolting up the motor to the frame. Clamping bracket not easily visible. Note the 44-tooth T8F sprocket fitted to the rear wheel.

With the motor in, it was then a matter of fitting the new T8F sprocket to the rear wheel. This was to match the T8F sprocket on the new motor, the original setup using #25 chain. Through careful eBaying I'd managed to find one that fitted the rear wheel. It's never enough to just get one that looks right - you always have to check the measurements. Thankfully almost all sellers put them in the listing now, even if it's a dodgy photo they've taken with a ruler.

The original gearing was 11T on the motor, with a 55T rear sprocket. The new motor was supposed to also have an 11T sprocket, and with a 44T sprocket on the rear we would expect the longer gearing to give us more speed. But I'd ignored something that should have been blatantly obvious. That, and the motor actually shipped with a 9T sprocket. This sort of thing is par for the course on eBay.

Calculating the ratios is disappointing:

That's hardly any change at all! Oh well.

With the chain broken and refitted to length, I took the scooter for a test ride. After just 50 meters the chain came off! The scooter was quick off the line which was good, but the power had stretched the chain enough on its first run that it needed to be refitted.

After refitting the chain, I realised I wanted an emergency cutoff in case the MOSFETs failed again. I decided to press a 100A megafuse & fuse holder into service. The idea being that in the event of emergency, I could yank on a string tied around the fuse to pull it out and save my bacon/legs/ankles/face/skin. 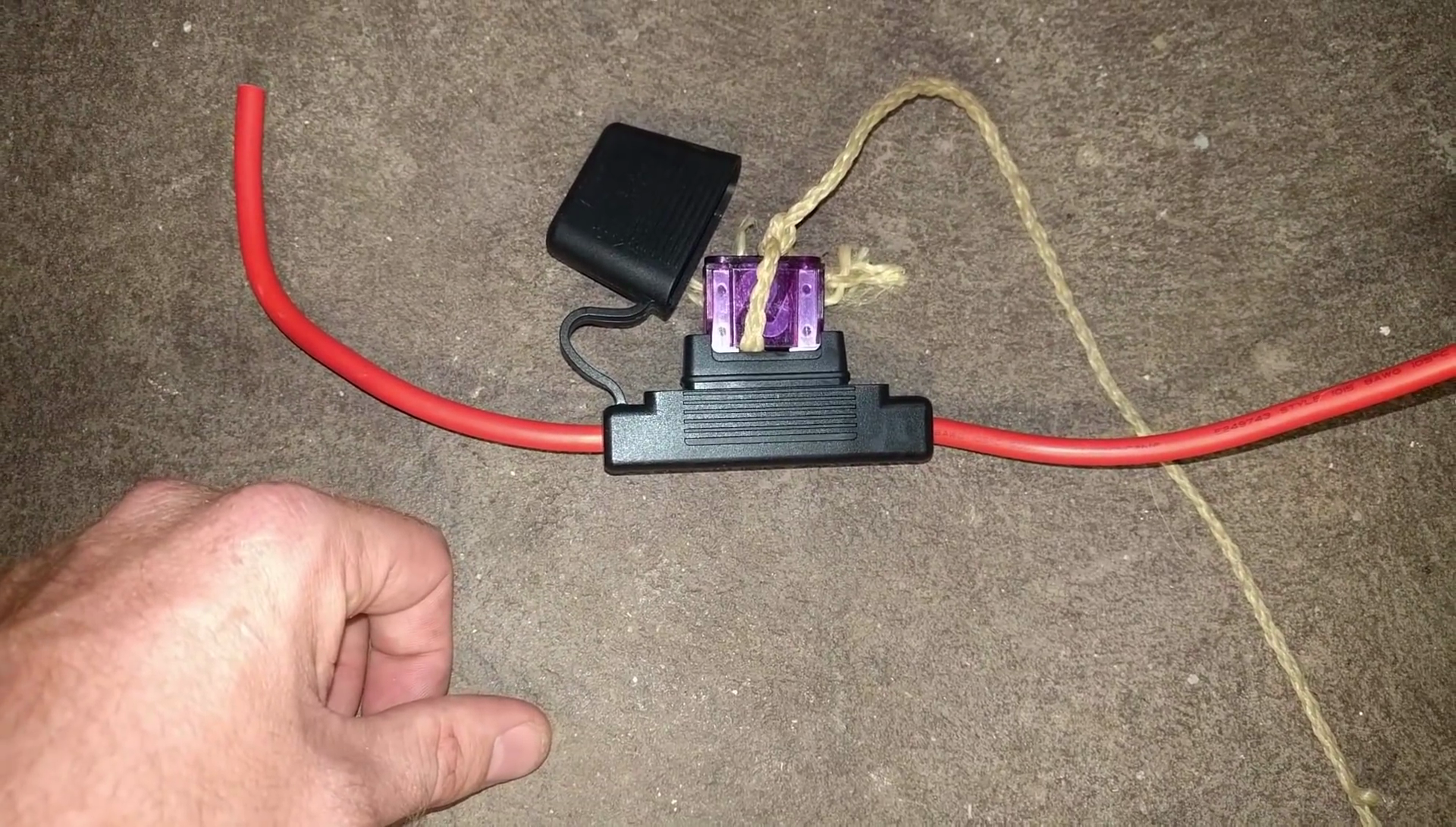 Is this a good idea? Well, no. Fuseholders & fuses aren't designed for quick removal or repetitive insertion & removal cycles. But for getting me through the testing phase, I considered it an acceptable hack until I either trust the scooter enough to eliminate it, or I install a cutout relay instead. Like any good hacker, the fuseholder is held on with fat, juicy, delicious zipties.

With everything in place, I retested the scooter. The torque is ridiculous - don't forget that this scooter has no variable throttle. It's all or nothing. Acceleration off the line is enough to throw you clear off the scooter. This is awesome - it shows we have gobs of power. However, there was a problem - our top speed was LESS THAN BEFORE?!? HOW?!?!

It all comes down to gearing and RPM.

The stock motor had a rated speed of around 2750 RPM... at 24V. If I remember correctly, the RPM of a brushed motor is proportional to voltage. Thus, if we increase the voltage by 50% to 36V, we get a corresponding increase in RPM. Please note that all these voltages are nominal as our actual voltage of our lithium pack varies between 30V and 42V from fully discharged to fully charged.

At 36 V, our stock motor which has been overvolted is spinning at 4125 rpm. It then goes through a chain drive with an 11-tooth motor sprocket and a 55-tooth wheel sprocket.

So our rear wheel is turning at the same speed as the wheel sprocket to which it is attached - 825 rpm. The rear tyre on an E300 is usually a 3.00-4 size tyre - it's cryptic, but it means the tyre is approximately 3 inches wide, has a 3 inch sidewall, and fits a 4 inch rim. This means the tyre diameter is around 10 inches - or 254 mm. It's a simple formula to get the circumference of the tyre.

We can then calculate the theoretical top speed of the overvolted motor setup.

Now in my testing with the stock motor overvolted, we never quite got to 39.5 km/h. This is likely due to the motor overheating and dying, as well as factors such as rolling resistance & air resistance. But it's a good guide for a possible top speed to shoot for.

So our rear wheel is spinning at 511 rpm.

This is a VERY interesting value - using a GPS speedometer app on my phone, I got a top speed of exactly 25 km/h on the new setup. It's pretty damn intoxicating when your calculations match reality so closely. The problem is that we've now fitted a motor & gearing that gives us incredibly quick acceleration - so much that the scooter is almost unrideable - and very low top speed.

Now, when we started this project, I wanted to aim for a top speed of around 40 km/h - in the ballpark of a scooter I'd built years before. I could overvolt this motor but I'd likely melt it again. Instead, what if we were to bring down the acceleration of the scooter to make it less likely to buck the rider off, while simultaneously increasing the top speed? What sort of gear ratio would we choose to hit 40km/h?

Well, first things first, we don't want to change the rear gear. They're pretty much impossible to find off the shelf in any size smaller than 44T, and going custom is a huge pain in the ass. Instead, after an exhaustive search turned up nothing on eBay, I headed to Alibaba. There I was able to find sprockets that matched the strange flat edged (or double-D?) mounting my motor shaft was machined with.

Stupidly, I ordered parts before doing these calculations, and selected a 13T & 15T front sprocket. Let's run the numbers.

That looks good! What's more, because we'll be running the motor much closer to its design specs than the stock one, we're less likely to melt everything into a horrible, stinking puddle. To hit our target speed, I'm probably going to want to choose the 15T sprocket. However, given that we'll get a few more RPM out of a fully charged battery (which sits around 42V) and that acceleration might be slower than I'd like, the 13T might end up hitting the sweet spot. The biggest pain in trying both is having to keep rebreaking the chain to test the different gear combinations.

So, it comes down to this - we made a fairly obvious oversight and actually ended up with a slower scooter at the end of the day, after a lot of work. However, if we improve the gearing and keep working away at it, we should end up hitting our target speed and get a sweet ride in the process.

Until next time,
TK out.

Gearing - The Key to Speed