Coffee time at CERN! Every week we get at least one caption explaining that the strange piece of equipment included in that week's image is a coffee maker. I thought it would only be right to include this shot of CERN's real coffee nook, and a scientist about to enjoy a fresh cup of liquid "get 'er done". I have to thank CERN's photographer for grabbing this slice of life shot!

It's worth taking the time to check out the high res JPEG direct from CERN, as you can really zoom in on the post cards and photographs in the background. One even says "Tout va tres bien" - which Google translates to "Everything is going very well". Some jokes never get old! 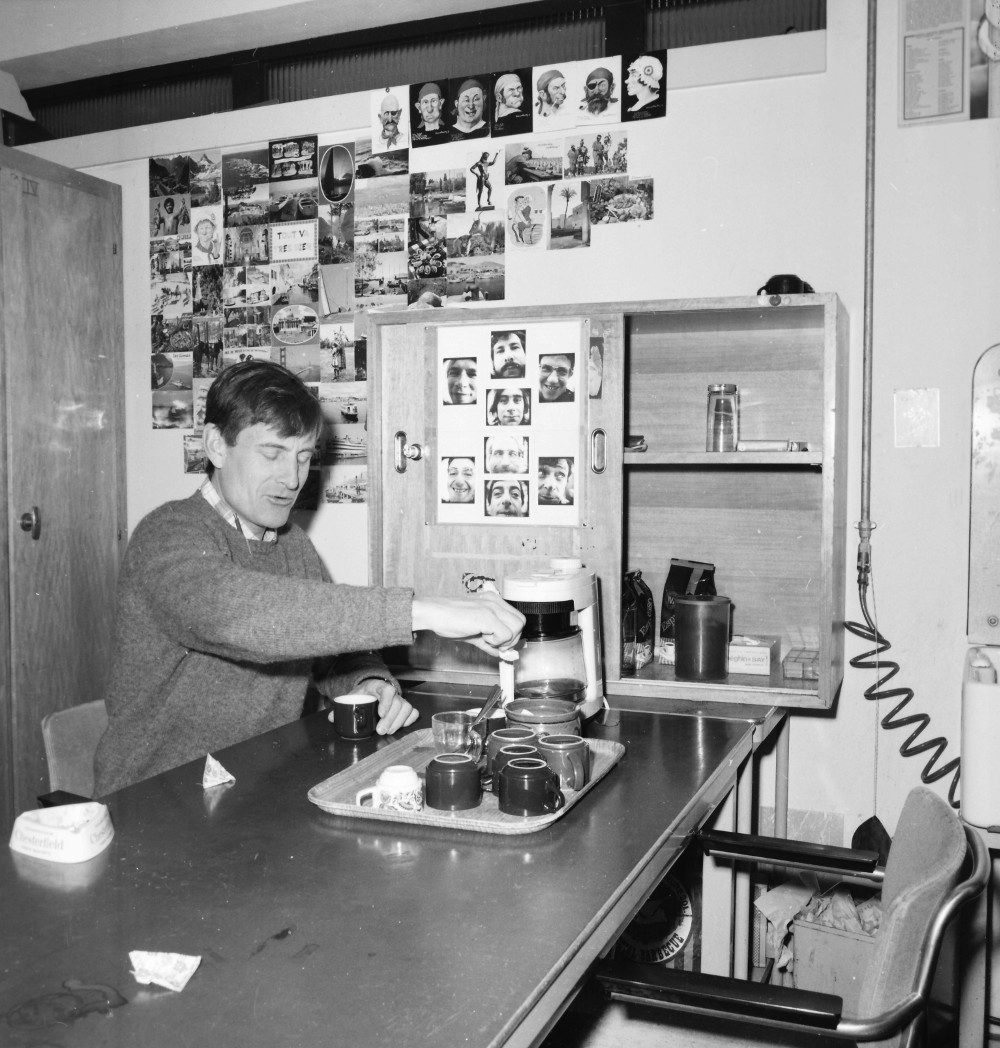 Until his morning cup-0-joe kicks in, Kevin thinks he is still driving to work.  (aren't you glad you weren't in his car pool?)

Damn,  I thought you said this stuff would wake me up!!!

CERN April fools day,1969 - Our new intern, Greg, holds onto the "antimatter containment pod" and "concentrates on something peaceful" for nearly two hours to "avoid worldwide destruction until it could be shut down" ; until he finally realizes it was only the coffeemaker.

Here Bob shows off one of his more popular tricks, pouring sugar out of his seemingly empty hand.  says Bob, "All I need to do is concentrate, and the sugar comes".

In this early telepresence experiment, Fred has successfully connected to eight coworkers on the screen to his left.  Congratulations were short-lived, however, when he froze up trying to figure out how to hand out coffee to the meeting's participants.

"Hey guys, I stretched out with my feelings and totally found the coffee pot handle!" Sadly, Gregor's first steps on the road to becoming a Jedi Knight went unnoticed at a busy CERN.

Dark matter at the bottom of CERN's black coffee always brought strange lucid dreaming at the wee hours of the night...

It's a cup of joe and fistbumps after a long day at the invisible man division.

Holy crap, Jameson! What did you put in that coffee? I'm smelling rectangles!

Researcher demonstrates the recipe for the Higgs boson ju-ju:
"Eye of newt, wool of bat,
wart of toad, whisker of Schrödinger's cat,
don't care if we create a strangelet that destroys the world,
put a death Adder's fork in that..."

Even though the other scientists had rejected John's idea to control the accelerator with a six speed manual transmission,  he would often close his eyes and imagine shifting through the gears of a machine with a few trillion electron volts under the hood.

David (left) with coffee maker (center). David's next of kin later learned that the contents of the coffee pot were not coffee, but instead reagents for cleaning the superconducting beam splitter heads. The employee who misplaced the reagent's original container has been reprimanded.

Neil demonstrates the infamous "gallium spook in a hot drink" trick.  A favorite at all the best CERN parties.

"No room in the Fantastic Voyage submarine for a 9th crewmember? Well, have fun exploring the underbelly of my coffee cup!"

Higgs, the CERN invisible-rabbit-technician, says something particularly arch about a young intern, and gets pounds from Gregor.

Duuude, I can see the gravity waves with my eyes closed, what did you put in my coffee?