This is not your Father's POV display! Scientists at CERN have came up with some amazing science advancements. They've also needed ways to display the data they collect. This image may depict some incredible new way to display data collected on from a high power physics experiment - or it could be a scientist's project for the CERN science fair. We may never know.

The album is titled CHAMBRE A ETINCELLES DANS EXPO TECHNOL, which roughly translates to "Sparks in the technology expo room". The lines traveling between the three horizontal display devices definitely appear to be aligned. Are they sparks of electricity? You tell us! 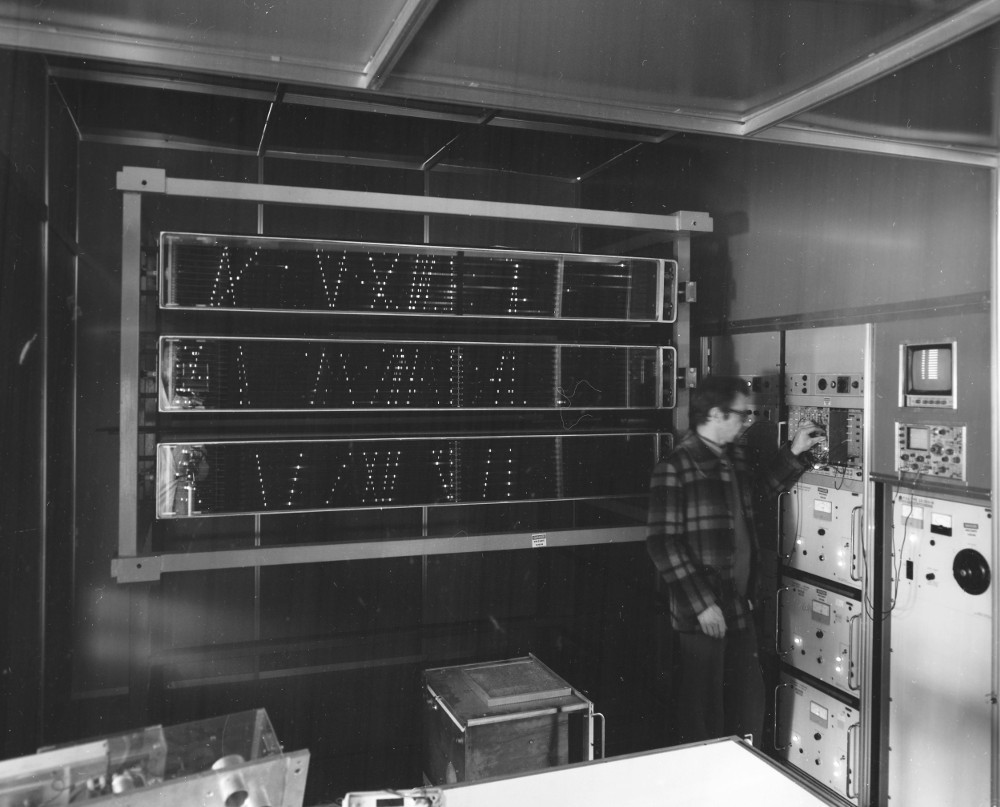 Last week's prize was a Logic Pirate. This week we're giving away a Bus Pirate from The Hackaday Store.

Ever since the funding cut back, we couldn't afford those guys with grinders or arc welding in the background to pretend they are busy constructing stuff . Guess we'll have to settle for simulating them on the display here to impress the tour.

BTW They do that a lot for some SiFi TV show background sets.

CERN's particle accelerator driven calendar was the most accurate in the world, but only for a couple of months every few years.

It said "Would you like to play a game?" and I said yes.  Are those missile launch tracks?

"I guess Jim was right, even with 10,000 band equalization, One Direction music still sounds like crap."

NO! NO! NO! I did NOT take out a second mortgage on my home to invent some silly electronic road sign for motorists.

This is ONLY meant to display things like "ZOMBIES AHEAD" or "WARNING: RHINO ON THE LOOSE" or "POOP", you know, those sort of things.

Hanz Linkletter's attempt to make science "fun" sing-along videos featuring the 'follow the bouncing tachyon' proved promising, until the unforeseen Lasing phenomenon. The lab  was a complete loss, but he had inadvertently created inroads into the modern pulse laser technologies.

The game of Pong was invented after a young Atari programmer saw this panel of mostly burnt out light bulbs.

Yeah, I know it sucks. Sorry.

"It took Mortimer five days to realize he'd been using the accelerator to reheat his lunch."

"This particle is named for the late Ugg Timmons, recorded in this image of an operating digital cloud chamber, taken during it's discovery."

Haven't captioned one of these before, so I stuck it on the wrong page.

I think we got a few broken bulbs in that 200 feet of xmas lights somewhere.  Good luck finding it.

What is it with those Counter-Strike newbies.  Why is everyone firing tracer rounds? This really kills an enormous aspect of stealth.  I'll just hide in this corner here and let them kill themselves.

We did it the world's first wall mounted light bright!

After years of research and development Bob puts the finishing touches of his new 3 line display
soon to be infamously known as the first person to ever write:

Oh this, I am quite proud of this.  This machine blinks random lights, and while it dosen't tell me anything, it makes the lab seem much more scientific.