Anyone who's worked on a major project, be it professional, personal, or for a contest like The Hackaday Prize, knows about marathon sessions. Those times when you put in your all and just push the project ahead until you drop. This scientist has definitely given his all and then some! He's catching a few winks right under the blackboard where he presumably has been working. This image has no caption, though it's attached to an album entitled Linac control room. None of the pictures seem to show much of a control room though. It seems that back in 1966, CERN's photographer was a bit more interested in sleeping scientists than the science itself!

So what do you think is happening in this image? Can you make anything interesting out from the diagrams on the blackboard? Give it a shot! 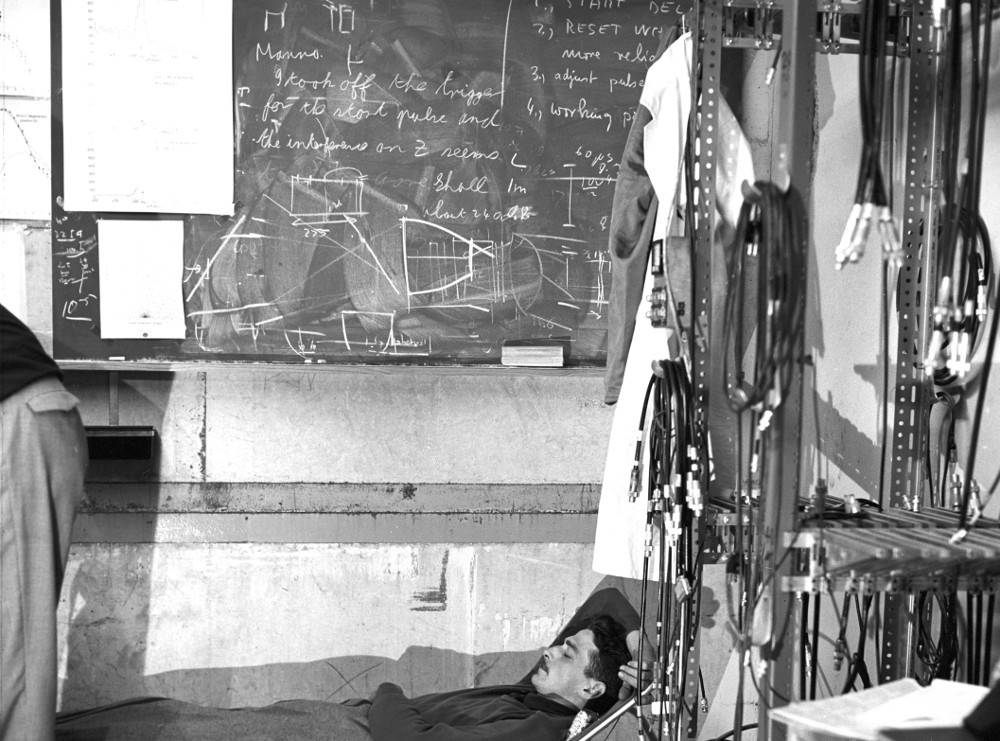 This week's prize is a Stickvice from The Hackaday Store.

Of William Carlos Williams's CERN oeuvre, his "This is just to say I have taken off the trigger for the start pulse" poem (shown here), is perhaps the best loved in particle physics slam poetry circles.

After bitten by the Schrödinger's cat, Doc Brown acquired the most useful power of a cat - being able to sleep anywhere, any time.

"And after all that work, we found out the answer to life is still 42."

after finally figuring out the dimensions for the new 3d printer, Frank decided to take a quick nap, because he heard that naps increase productivity

"Hey Hey! Take me a photo, just as if I were sleeping"

The chalk dust falling on him as he slept made him dream of a winter snow with subatomic particles dancing between the snow flakes.

Johnny! Get me a new minion. You will find them in the store room behind the spare cables.

After takeing one look at this problem, Phil decided to sleep on it.

Tragically, the adage "If looks could kill" was proven mathematically and then tested practically by CERN scientists.

Fritz wake up, the boss says he's not buying our lucid equating scheme.

Claus conceded that to take off the trigger was the first sign of madness and decided to take a rest.

Just moments from discovering a cure for his narcolepsy, Bill was once again its victim

One of CERNs side projects was gas filtering pants.  This Poly/Cotton blend did not pass the knockout test.

They said Bills gas could knock out a horse, but the closest thing they could find to test the theory was Horace.

The end of another busy day at CERN summer camp.

The higher-ups began to get suspicious of Dr. Carter’s extensive research into lucid dreaming.