When I first signed up for this account I was like "oh yeah! I'm a pretty cool part-number!" And then I realized the part-number I thought I was was actually the 40106. ( @davedarko, I distinctly recall your calling me out on this one ;)

Interestingly, the only thing the page says about it is:

Which, of course, is all clear-as-day just by looking at the picture.

Actually, it's danged-cool, 'cause yahknow, *every* gate can be made of combinations of NANDs. Awesome! Put enough effort into it, and you could build an entire computer outta no other IC's than those with my user-number on 'em. Perty Snazzy.

And Open-Drain, no less, up to 136mA at 10V, or could handle a load as high as 20V... meaning yahknow, you can use my part-number to do things like directly drive relays or incandescent bulbs...

*as well as* do *all* logical-computations... Using no other semiconductors than those with my user-number, you could build not only an entire computer, but also interface it with the real-world, not even needing to add transistors inbetween your 40107-based CPU and your relays or lightbulbs... Slick!

TODO: Read more in this interesting-looking page, http://homepages.nildram.co.uk/~wylie/ICs/monolith.htm which states (regarding 3-digit date-codes):

However, there are cases where the decade is 1970, such as the RCA 4000 series CMOS chips

So, judging by the image, above, this guy was most-likely (or, maybe, allegedly?) manufactured in the first week of 1970.

Also interestingly, that same page (and its link) states that RCA, itself, introduced CMOS via the CD4000-series:

The arrival of the RCA CD4000 series of CMOS chips, originally known as COS/MOS, is particularly well-covered by Wikipedia. This was the last major IC technology to be developed, and is still used for all ultra-scale circuits such as microprocessors.

ooooh, let's continue down this ridonculous fractal-branch (or, apparently as most normal-people would refer to such things, this "rabbit hole") because, frankly, I've gone down far too many rabbit-holes that wound-up being downright horrendous, it's time for a good laugh, even if it's at my own expense for wasting so much time following this fractal-branch.

Was planning to order ten, just for the sake of having some stock... but now that I see this thing is apparently non-existant, maybe I should order a few more, in order to have some fryables while trying to determine what this thing *really* is...

So, that linked wikipedia article says:

So I don't quite grasp why they date-coded their chips with a year-marking starting with 1970, but that's another branch of this fractal I haven't quite the energy to look into.

Anyways, here's this chip, 14-pins, marked CD40107BF, which is a standard-ish marking for a 4000-series chip from RCA... And, maybe, bought by Harris, which was apparently later bought by TI... (which is the only datasheet I can find) 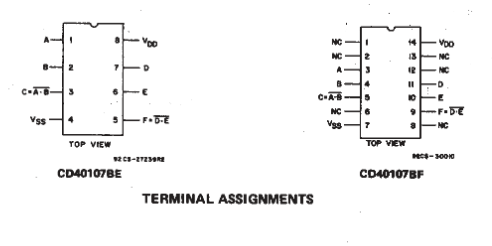 Somehow it all makes some amount of sense...

They *coulda* thrown 4 2-input NANDs in a 14-pin package... but they apparently opted not to. It's rare to see a chip with so many NC's. Maybe it has to do with power-dissipation. So... it'd take a heck-of-a-lot of these guys to build that CPU... And, don't forget all the pull-up resistors. It'd be SLOW. But doable. And it'd take nearly twice the space, using these 14pin DIPs, rather'n the 8-pin DIPs... And, realistically, would it be any smaller than the equivalent discrete-transistor-CPU? 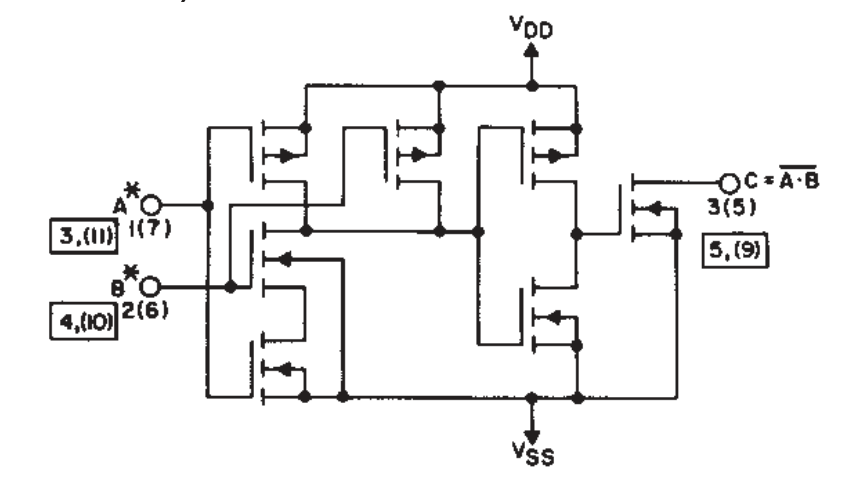 And, yahknow... maybe that--this entire fractal-branch/rabbit-hole--is all somewhat relevant to my being, my essence... I didn't CHOOSE esot.eric. My name's Eric. The esot part "chose me" long long ago. I just finally chose to accept it. Or maybe acknowledge it. Embracing it...? Well, that may be a ways off.

Maybe I should get a gofundme or something to build a 40107-based computer.

So, maybe ordering 100 of these, at this point, doesn't make much sense, at this time, but $5 for 10 of 'em, just to shove'em into the wall, might be reasonable.

Repurposing IDE-Cables (even for video!)

> Maybe I should get a gofundme or something to build a 40107-based computer.

Just go for it. Since it's open-drain, you can implement wired-or ! Hence less gates than #NEDONAND homebrew computer

Been following NEDONAND, that's quite the accomplishment.

This'd be fewer gates, yeah, but nearly twice as many chips, and a shitton (a shit-ton!) of resistors ;)

What a glorious sight !

Or maybe... isn't there a way to have a high-side driver mosfet connected just like a pull-up resistor...? I vaguely recall something about connecting the gate to the drain, can't recall the benefit, maybe slightly faster, overcoming output-capacitance quicker than a resistor, or something. Can't seem to search-fu it, I'll have to dig out my ol' textbook.