I've made some progress, but also have a growing list of issues. I'm a little closer to getting the install script working, but during testing, I got a malloc assertion:

I'm sure this means something to someone, but it's not meaning a lot to me. Using valgrind and a bit of trial and error, I think I've managed to track it down to the magnetic model library. It's only happening when I have satellite lock, as I'm not correcting for magnetic declination until I know the location, so it doesn't always appear when I'm testing indoors. I've decided to temporarily disable the correction until I can solve the issue, preferably when I'm somewhere outside for a while.

To take a break from banging my head against mallocs error messages, I've been trying the astrometry.net solver. Most of the packages are available through apt-get, the only one that isn't is cfitsio. This one needs to be compiler from source, then the astrometry solver needs to know where it is during compilation. Once installed, I downloaded the index files, saved them to a usb stick and configured the solver to use them from there. The first run wasn't successful. After a bit of digging, I found that the packages it uses on wheezy aren't a high enough revision. A fresh start with Jessie and every thing started working. There's quite a lot of index files, so I need to figure out which ones to use when. The fewer index files used the quicker the solving process. I tested it with one the demo images and the process took 2 and half minutes. This included producing a list of stars in the image and their position. I only need to know the centre co-ordinates, which are included in the console output. I need to experiment with the parameters to try to speed it up and try it on an image captured through the telescope. I've not managed to capture anything with the telescope, the night sky hasn't been clear when I've been available. I also need to do some work with the alignment of the camera to be able to use it with the solver.

I've designed a motor bracket to attach to the right ascension axis of the telescope mount and laser cut this out of 6mm ply. Naturally I've made some modifications to make it fit and updated the design to match. In order to connect the shafts I designed and printed a coupling. The first iteration had one grub screw for each shaft, but I wasn't able to align the two shafts. I tried again with four screws. After a lot of adjustment, I'm able to move the telescope, but still have a slight wobble. It's good enough to get me going while I wait for a proper coupling to come from China. 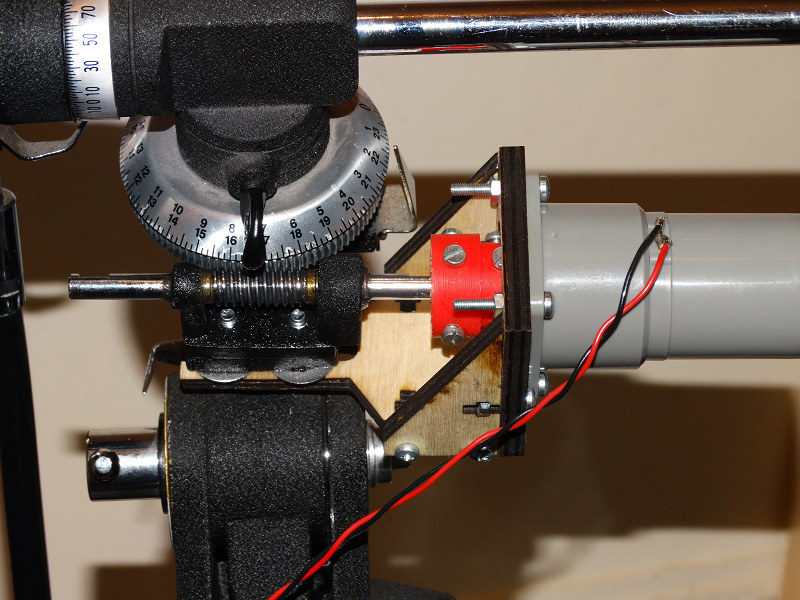