I attempted this in 2015 and failed hard, coming back I know what I did wrong and how to fix it. MAKE A STACK!

I spent alot of hours doing everything the wrong way in 2015, but with my newly discovered method of plasma functionalization of carbon and subsequent decoration with nitrogen, I have a better way.

My research into batteries and ultracapactiors allowed me to stumble upon proton conducting membranes that are much easier to construct and will be much more durable.

I have also did alot of research into the morphology of current fuel cells and realize my whole plan was a joke. In order to get the energy density and power density a stack must be made that can run at pressure.

The good news is that with new morphologies and chemistries I can make these symmetric electrodes simplifying construction.

The challenge is to build a fuel cell from absolute scratch that contains zero platinum in my garage... haha I know right! If I get a 1000 dollars for this project I will definitely be spending it on a bottle of hydrogen and a regulator.

Atmospheric plasma functionalization of carbon yields nitrogen doped structures, these compounds catalyze both electrolysis reactions and oxygen oxidation in hydrogen fuel cells. Pristine nitrogen doped graphene is also fairly hydrophobic which should keep water from saturating the cathode side of the fuel cell.

The biggest issue is making a thin membrane that can be handled and assembled in a stack, as far as the gas flow patterns I will probably be trying to print them in PLA, then mold them and use high temperature epoxy for the positive.

I printed everything in PLA before and it just deformed when I tried to heat the cell to temp, not to mention the HCL/aluminum hydrogen generation was dumb as it created HCL fumes that destroyed any catalyst on the anode side.

This time I will be generating hydrogen and oxygen using electrolysis with the same nitrogen doped carbons, this will give me cleaner fuels and be a precursor to the space planes fuel generation mechanism.

The stack will have much less dead space and will be pressurized to 30psi, how I will pressurize the hydrogen I do not know yet, but I must exercise extreme caution obviously.

An air compressor will be used to pressurize the oxygen containing atmosphere, and that side of the system will be open to vent evolved water.

It's a fairly complicated task, but I believe I have failed enough I can finally accomplish the goal. 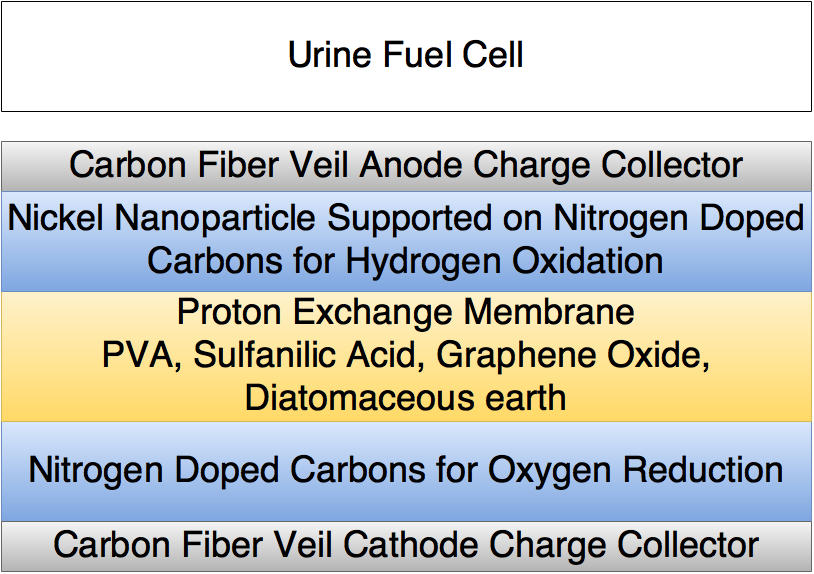 I do not know if you can get 30psi but one option may be using a hydrostatic column into your electroylyzer's electrolyte feed?

The 2016 Hackaday Prize
HAL 9000: I am putting myself to the fullest possible use, which is all I think that any conscious entity can ever hope to do.
Project Owner Contributor