The LEDs for the fluorometer and backscatter sensor recently arrived and I measured their spectral output to make sure they were as advertised. I ordered the chlorophyll fluorometer LED and backscatter LEDs through Mouser so I was pretty confident that the specs were accurate. In my original design had had only included one NIR LED for backscatter measurement but I decided to add a second at a different wavelength because it might be able to provide information about particle size distribution. The CDOM LED, which has a peak at about 370nm, I got from eBay and was less confident about its spectral output.

I made the measurements using a small spectrometer with the LED pointing at a diffuse white panel and measured the reflected light. 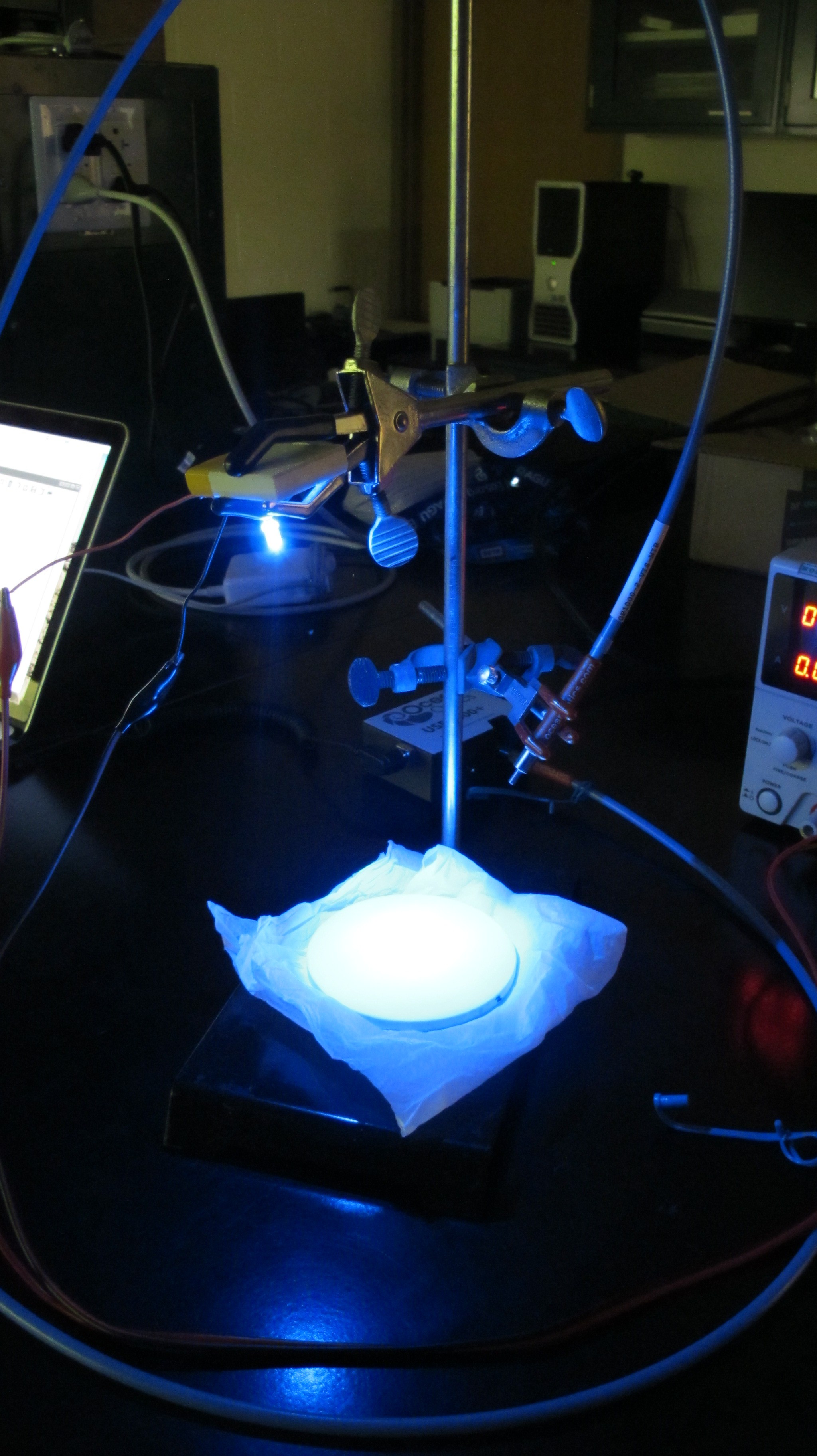 The figure below shows the normalized outputs for each of the LEDs. 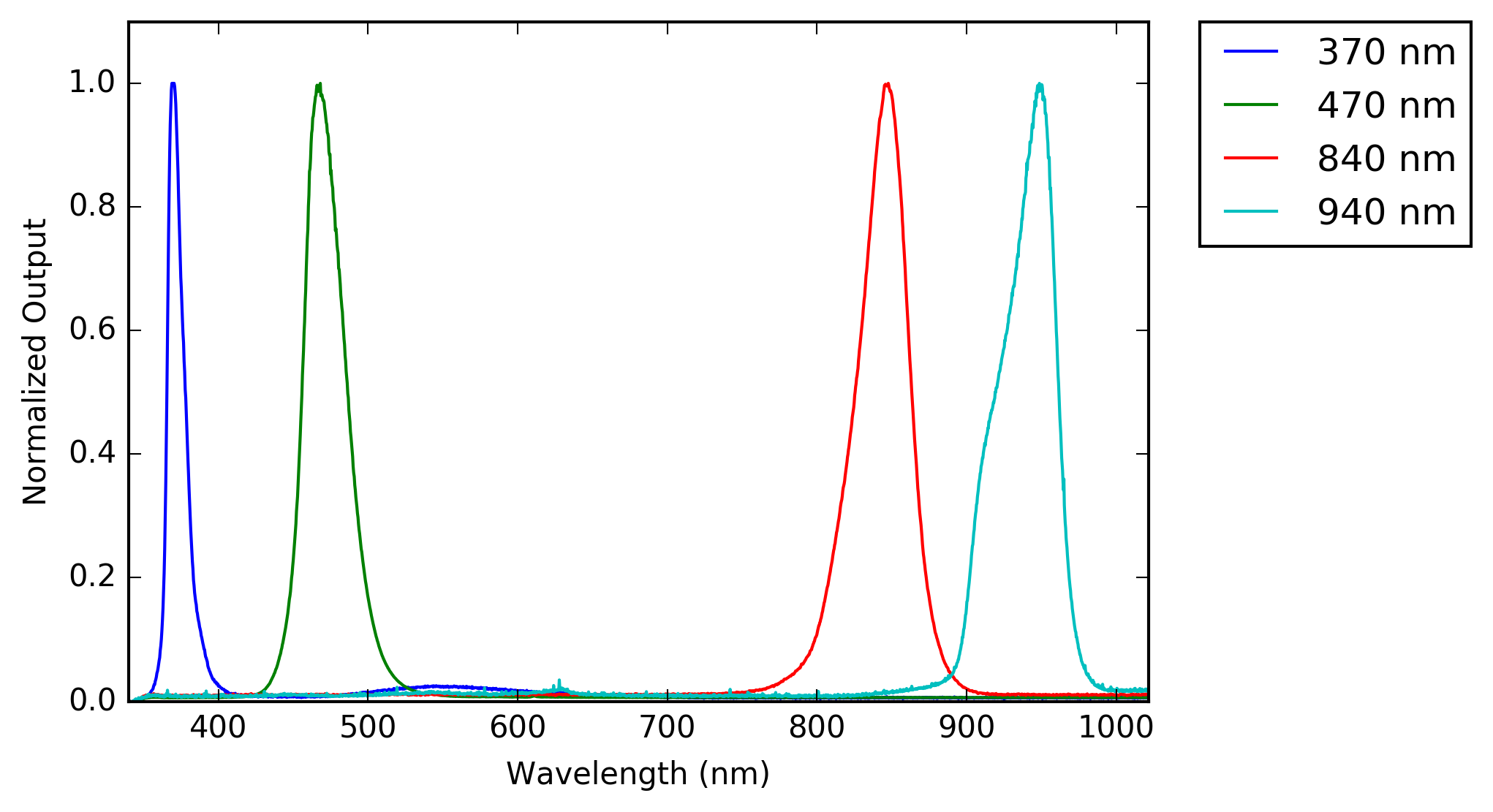 You can see that for the most part the spectral emittances of the LEDs are accurate. However, there is some emitted light in the visible spectrum by the UV LED. I have a suspicion that output in the range ~500-600nm is caused by fluoresence induced by the UV signal. Knowing this is important because this is close to the wavelength band were CDOM fluoresces, 460nm, and may result in over estimation of CDOM concentration. To account for this I plan on placing a filter in front of the UV LED to block visible light emmision.

After testing the LEDs I decided to collect some water from a local lake and see if I could induce chlorophyll or CDOM fluorescence and measure backscattered light. 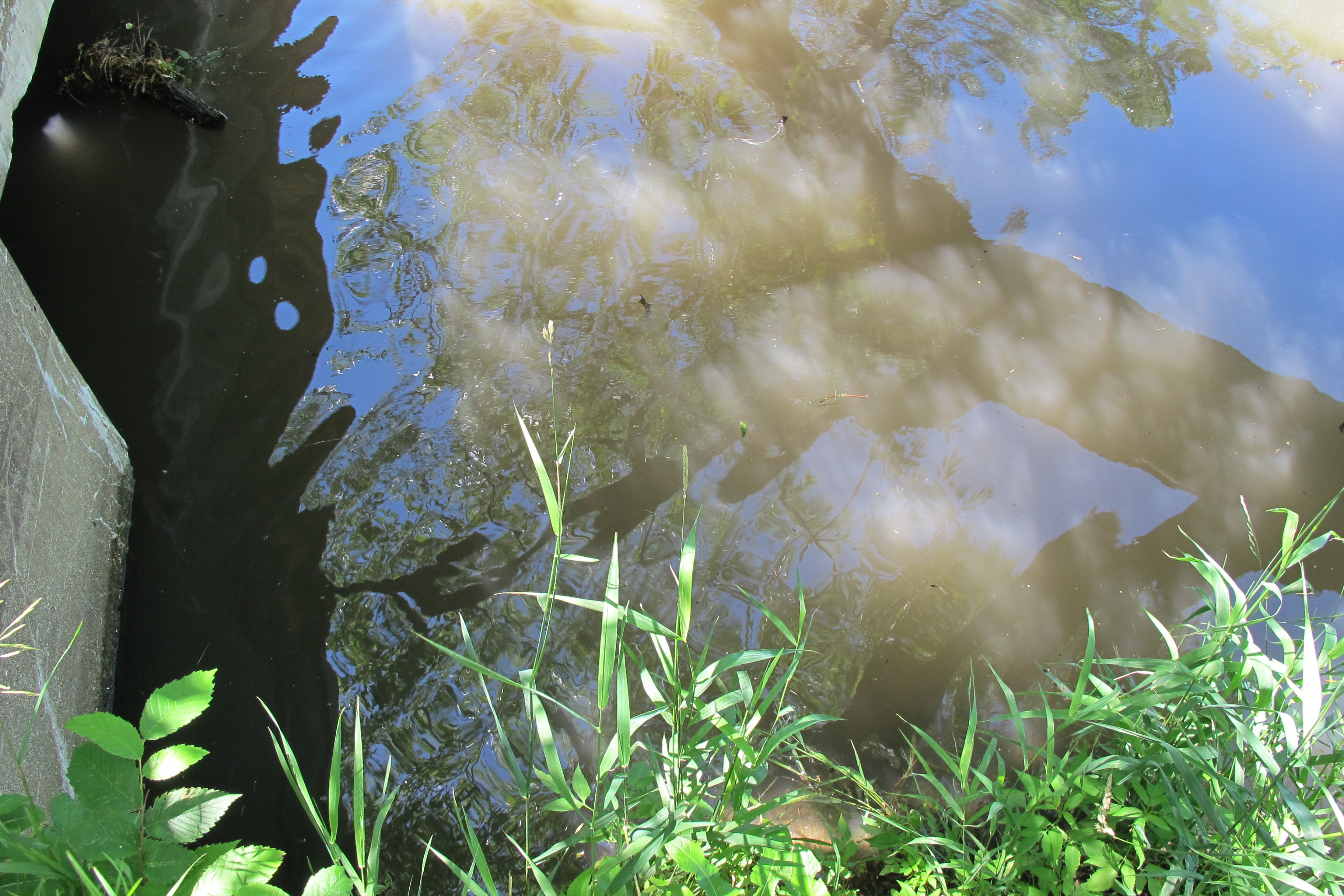 We recently had a large thunderstorm and there is a lot of suspended sediment in the water.

I placed the water in small vials and illuminated them from below with an LED and pointed a fiber optic cable connected to a spectrometer at the side of the vial. In the profiler the light will be measured with a photodiode, but for testing purposes using a spectrometer is valuable because it provides information about the spectral response of the emitted light. 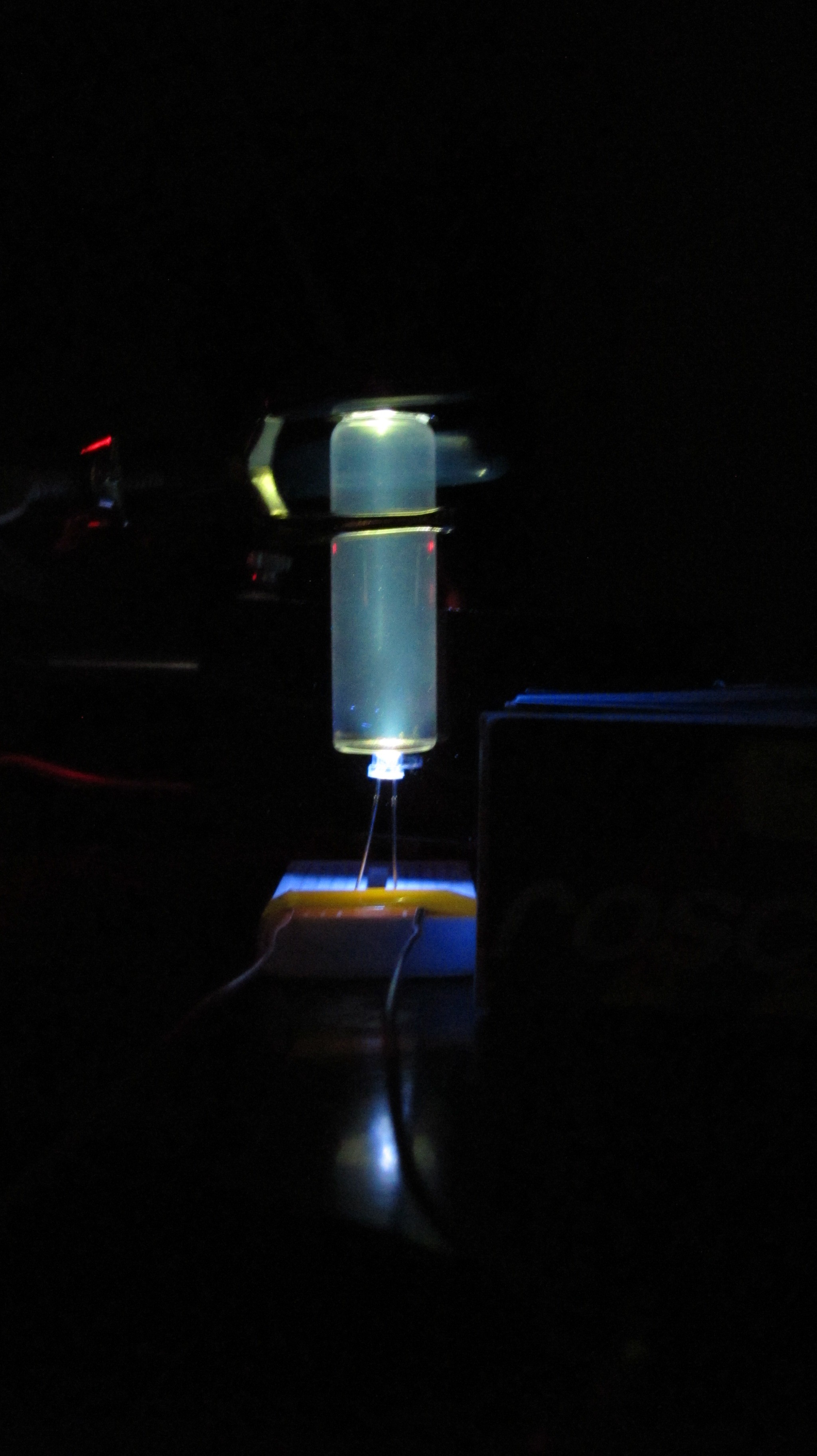 As a comparison I also filled a vial with distilled water and recorded spectra while illuminated with the LEDS to get baseline measurements. The figure below shows the results from the infrared LED measurements. 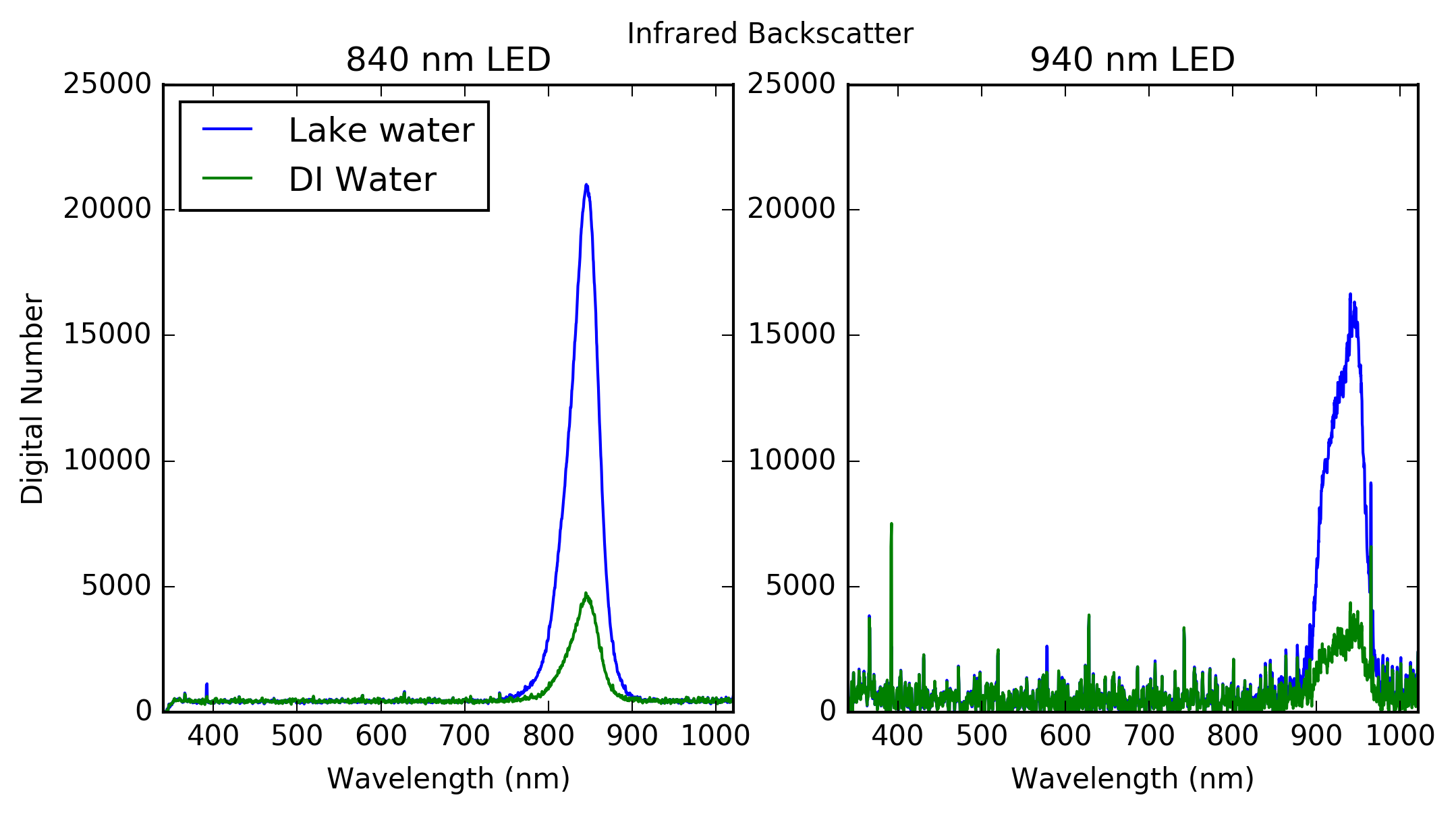 As expected the magnitude of radiation measured by the spectrometer is much greater in the lake water compared to the baseline DI water due to scattering of light by the suspended sediment. One thing to note is that the power output of the 940nm LED is lower than the 840nm LED causing a lower SNR, which is evident in the graph.

The results from the UV and blue fluorescence LEDs showed similar trends indicating that light measured by the spectrometer was just light scattered by the suspended sediments and not light fluoresced at a longer wavelengths from chlorophyll or CDOM. What this means is that water I collected likely contained very little to no chlorophyll and/or CDOM. Next week I plan on either extracting chlorophyll and CDOM or finding water bodies with higher levels of both to test the abilities of the LEDs to induce fluorescence.