I was discussing with a friend a pet door that would only let out certain animals. We had a few basic ideas (RFID, magnets, etc), but a big issue with a dumb sensor is the wrong animal sneaking out when the door opens.

Maybe a camera would work? Sounds like a good use case for machine learning. This project distinguishes between three pets.

This is my first attempt applying machine learning to a real problem beyond coursework and MNIST/CIFAR- if you stumble on this and can recommend better ways to do things, please reach out!

I hooked a webcam to a Raspberry Pi and mounted it with a view of the backdoor. Every minute it take a picture and uploads it to Amazon S3. 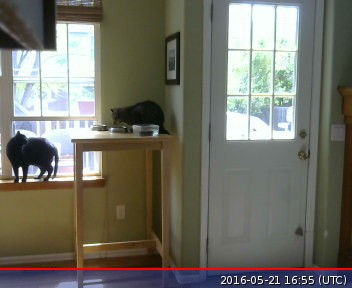 I wrote some tools to quickly classify training images by hand and output a CSV.

The software is written with Tensorflow (with TFLearn), and Scikit.

It seemed like I could run into a problem of a network that just always predicts an empty image. Since the scene is usually empty, predicting that the scene is empty would actually be a pretty low cost network. To mitigate this, I decided to break the problem into three parts:

This uses logistic regression on the average brightness of the image. 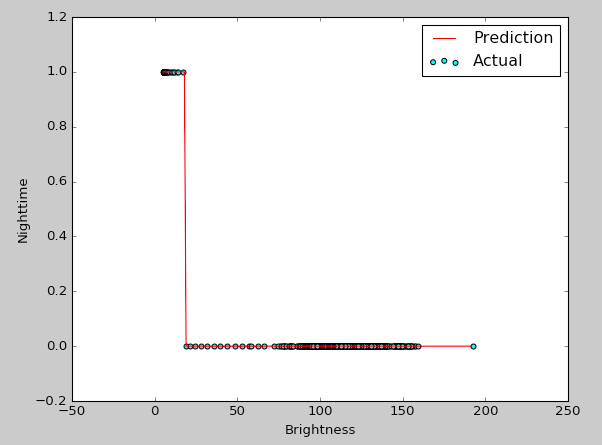 Logistic regression handled this with ease.
Determining if Anything is Happening

The next step identifies if anyone is present in the image, or if it’s just an empty scene.

After a few attempts, I ultimately realized that this is a fixed position camera on a pretty limited scene. The scene can change a lot between night and day, but animals will always be in the same place- table, windowsill, floor. They won’t just be floating midair. Given this, a fully-connected neural network worked fine. It doesn’t need to know what a cat looks like- just that a pixel may correspond to activity.

To handle issues of lighting and shadows changing throughout the day, I created an average image, which is the average of all daytime images. I subtracted this image from all training images, like zeroing a scale before weighing something. It’s not perfect, but it brings out a little more contrast in the photos. Notice the cat on the table becomes more visible when the average (center) is subtracted.

This is pretty awesome, good job ! In which school are you studying ? I would like to start image recognition via deep learning, have any tutorial/book/video/MOOC to recommend ?


A raspberry is powerfull enough for all the processing or you did it via computer ?

Thanks! Out of school for a while, just trying to keep my skills fresh.

It's more theory, exercises in Octave/Matlab, but made Tensorflow a lot more accessible.

Just commenting to say I love your cats' names.

The 2018 Hackaday Prize
This project uses artificial intelligence (deep learning) to detect when rooms in the house are messy or clean (via cameras & TensorFlow).
Project Owner Contributor

Play Doom on a giant screen using your body as the controller.
Project Owner Contributor