Little Flash is a 3d printed robot powered by ultracapacitors. To prevent getting stuck, she uses a bump switch and random path adjustments. The purpose of the project is to "get the word out" that electrical devices can be charged very rapidly for thousands of use cycles.

Making a couple of changes to the design allows me to reduce the part cost by forty percent.  Here's Little Flash (left) and Little Flash 2 (right).

Daren Schwenke suggested a modification to the servo motors that allows me to remove the Arduino motor shield (a costly component). I do lose current detection, but that seems to be insignificant in the scheme of things. Changing the dc to dc converter to a "non metered basic unit" reduces costs further.

This year's competition is about moving toward a market solution for a given device--I thought I would at least try to move toward lower costs while maintaining functionality for Little Flash.

Currently, she runs for over 25 minutes on a single charge and the charge is supplied using a constant current supply (10 amps for 40 seconds).

I expect to use three 3000 farad capacitors (in series) to quickly charge Little Flash--this could result in Big Flash; something we'll see in a few days.

1/4" soft (or rigid if you like) copper pipe makes pretty good 200A+ buss-bar at a fraction of the cost of real ones.  Squish the ends in a vise or with a hammer, drill through, and then you have termination points as well.

Lighter weight could be had by using refrigeration tubing, although it's usually the same price, and for the transfer duration that would probably be fine.  On the other end of the spectrum, Type L water pipe can handle 800-1000A.

I used supercapacitors (0.1F @ 5V) about 30 years ago to maintein the data in the CMOS rams to replace the batteries and they worked fine. In your case I still find them very expensive for an energy value of only one Wh, I have to spend a lot and I have large dimensions and weights, especially when compared with Lipo batteries.

The Maxwell 350F supercaps have a very low internal resistance (2.2 mohm) and you should use short wires with a very large section for maximum energy transfer.

Did you consider using a delrin caster ball as opposed to a printed one? It seems like the printed one would cause unnecessary friction.

Also, are you running at 9 V on the bot? I'm wondering how long I could run a Raspberry off of the supercaps, as long as I have it bump into a charging station every so often.

You are correct--the printed ball creates friction and (worse to me) is often noisy. Of course, the printed ball can be fabricated at any size or any color--so I appreciate the shallow value of "how it looks."

In this specific configuration, my dc-dc converter is set for an output of 7.7 volts.  The robot (Arduino, shield, motors, converter) draws roughly 250 mA. Starting at a charge of 8 volts and draining to 3.5 volts gives me 25 minutes of run time. So, my steady output energy equals 250 mA at 7.7 volts for 25 minutes. If I start at 8.1 volts and discharge to 2.8 volts (questionable bottom limit of dc converter), I would get a little more time. This dc converter includes a power hungry voltmeter (which is blue and looks cool--I'm somewhat into aesthetics), so that could be turned off for more usable output energy. I haven't compared converters, so you might find something more efficient.

For the current size a ping-pong ball might work well too,

Good thought--that would be smooth, light and readily available.

I recently built a Jetson Nano bot from a tutorial from NVIDIA and they use a 1" delrin caster ball like this one: https://www.exp-tech.de/zubehoer/sonstige/6715/pololu-ball-caster-with-1-plastic-ball-and-ball-bearings
It's smooth and has very low rolling resistance (inherent to the material). I think Sparkfun or Adafruit sell it in the US, and you can also find it on eBay. I found it works very well, even with a 3D-printed caster housing.

I see, I think for those power stats, I'd have to find bigger supercaps, as a Jetson/Raspberry board would draw around 1 A, and the motor driver would also draw at least 0.5 A. In any case, I find your build pretty cool, and I would love to find a way to power mine with supercaps and then recharge every so often with a 10-second bump into a charging station.

interesting project, I'd like to know the energy [Wh] actually supplied by the super capacitors, measuring current and voltage.

In this specific configuration, my dc-dc converter is set for an output of 7.7 volts.  The robot (Arduino, shield, motors, converter) draws roughly 250 mA. Starting at a charge of 8 volts and draining to 3.5 volts gives me 25 minutes of run time. So, my steady output energy equals 250 mA at 7.7 volts for 25 minutes. If I start at 8.1 volts and discharge to 2.8 volts (questionable bottom limit of dc converter), I would get a little more time.

Here's some information I put together in the past that you might find interesting.

Ultracapacitor or Battery?
06/14/2016 at 17:26 • If you are a hacker, interested in doing things differently, here's some basic information regarding ultracapacitors. 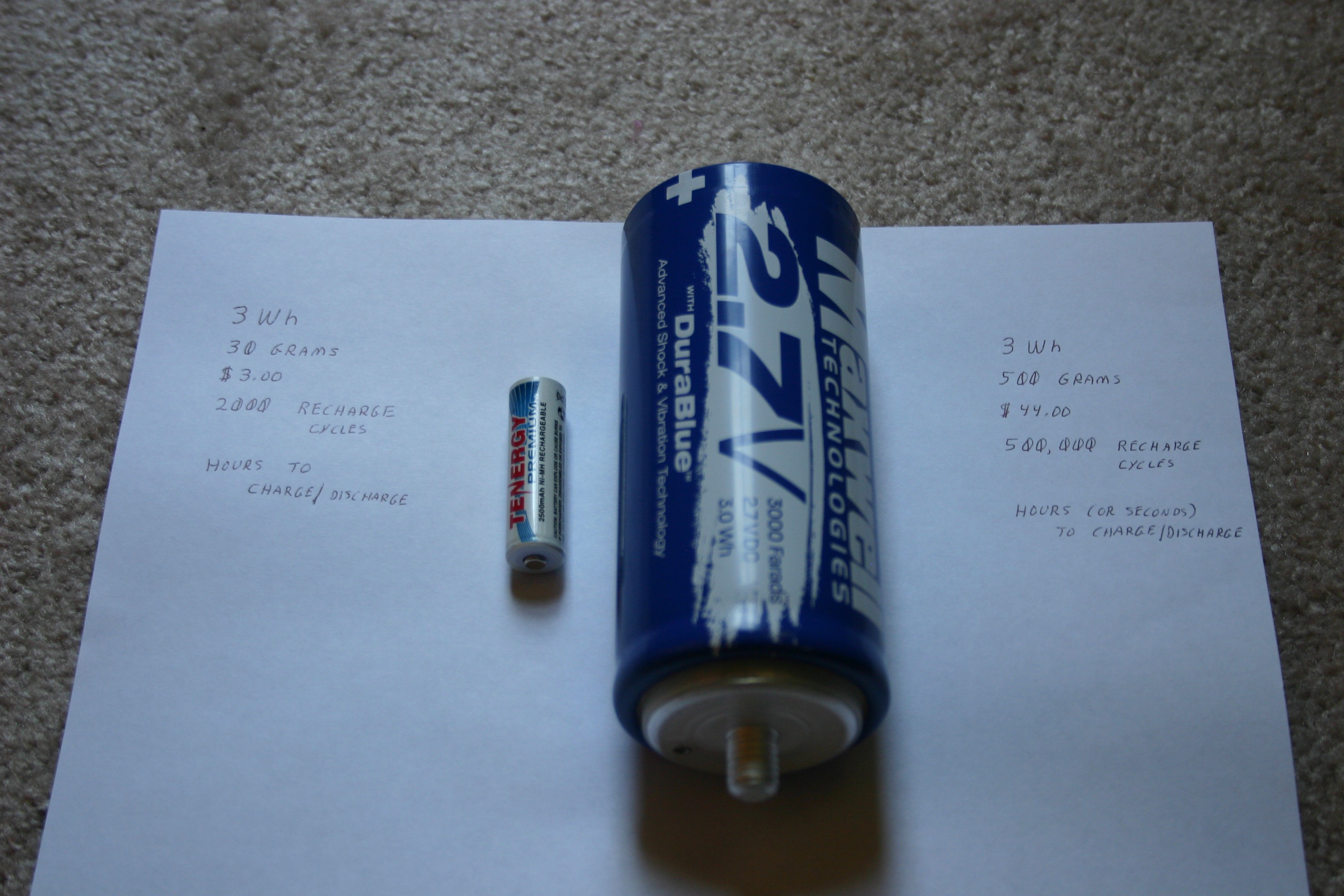 For a fast "rule of thumb" comparison, 1000 farads at 2.7 volts amounts to about one watt hour of energy storage. This means the 3000 farad capacitor above stores about the same energy as the NiMh AA cell pictured above. Using a La Crosse BC-700 charger, I charged the AA cell above (rated at 2500 mAh) at 500 mA--discharged at 250 mA--and recorded a capacity of 2330 mAh. The capacity and number of charge/discharge cycles of batteries depends on battery chemistry and charge/discharge rates.
I took five 350 farad capacitors (in series) and charged them to 12.72 volts. After 24 hours (no load attached), the voltage had declined to 12.57 volts. After 48 hours, the reading was 12.50 volts. Capacitors will lose noticeable charge in a matter of days.
A 30 gram battery (NiMh) is comparable to a 500 gram capacitor. Clearly, batteries are the winners in this category. 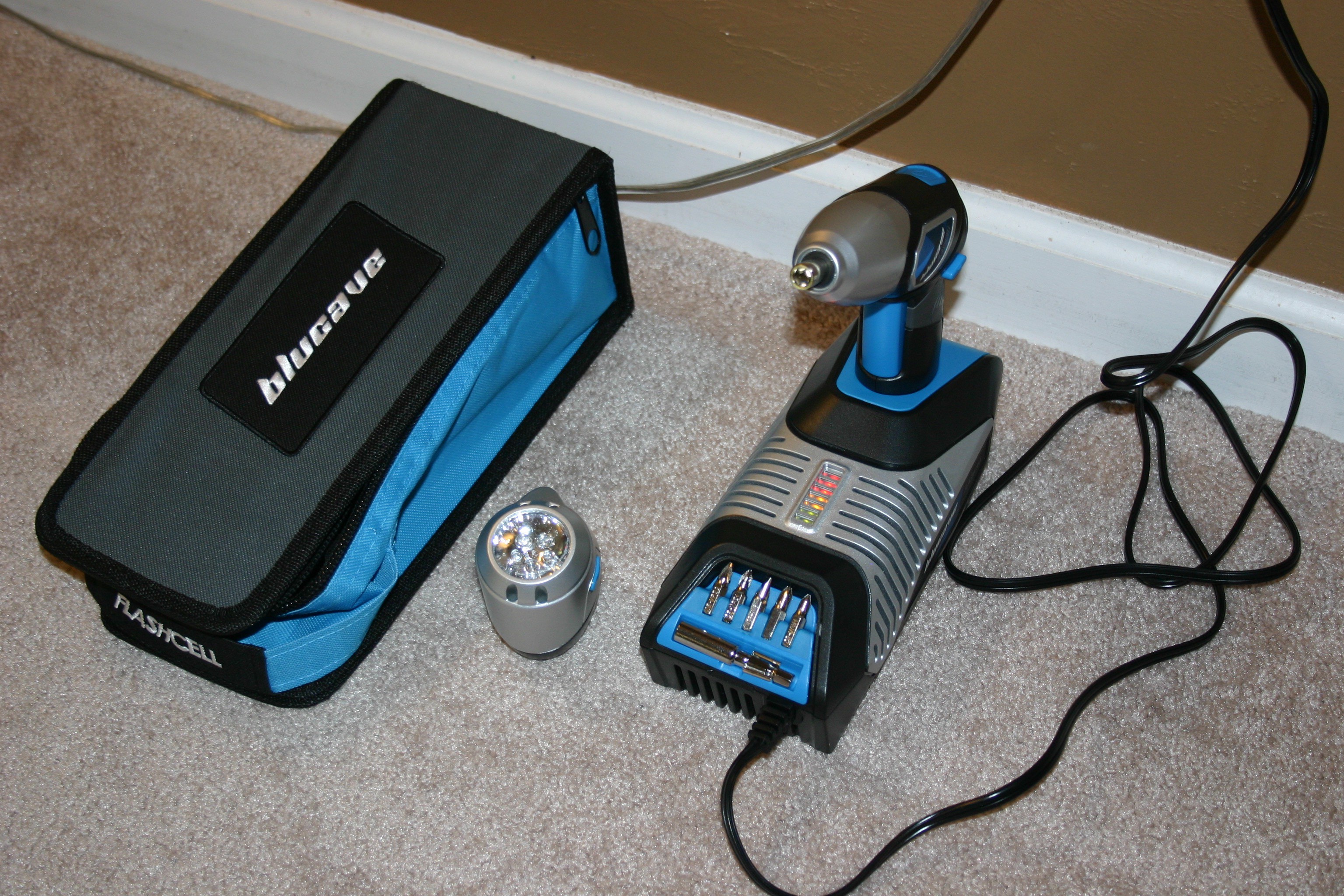 Yes--this screwdriver/flashlight charges in 60 seconds and is currently available on Amazon.com for about $21.00. This appears to be a product that was launched for $60. and didn't make it, so don't expect it to be around forever. Coleman made a capacitor powered screwdriver a few years ago (I owned one), but I can't speak to it's long term functionality as I tore it apart for all the good pieces it contained.

Unlike batteries, the voltage steadily declines on a capacitor; meaning that more circuitry is required to keep the output usable.

Ultracapacitor sales do not target hackers or consumers--they are intended for rail systems, trains, utility vehicles; that sort of device. Look at the "bolt" connectors in the top picture. The M12-1.75 bolt is about one half inch in diameter. We're not talking about 300 mA discharge and 10 amp charge rates. These things are designed to move serious amps in a hurry.
That being said, if (like Mato) your goal is to charge quickly and get back into service (hand tools, flash photography, robots, toy vehicles) capacitors deserve a look.

This is really cool. I've been looking for a reason to build something with supercaps and this is it!

R.Hasika - a precise and compact robot base (rpi)

Fling the thing with a catapult, find it, bring it back, repeat.
Project Owner Contributor