A breakout breadboard that make sense to me, and makes it easier to work with the rPi in an experimental development environment

This is my fourth or fifth iteration of this basic circuit.

When I started doing rPi bare metal program I used FTL232 serial-to-usb modules to connect the rPi serial port to the PC in order to download programs,  monitor serial output, and do some basic input to my programs.

In time I decided to use a Teensy 3.2 instead of the less expensive FTL232 board, especially since with the Chinese clone FTL232 boards I have, and in conjunction with the stupid behavior of Microsoft Windows with regards to polling and resetting comm ports, I eventually decided to (a) use a Teensy, with it's multiplicity of hardware serial ports, to hook up to the Pi and (b) write my own terminal program / rPi programmer for uploading programs.

The circuit can be easily put on a small, separate, breadboard, you don't have to use the breakout setup I have here.  But the other thing I got really, really, really sick and tired of, especially with additional hats on the Pi with cheap pins, are/were the dupont female connectors and always having to fuss with and sort out the rPi pins every time I wanted to simply change a hat.  The connectors continually fail to make good contacts, and it's a pain to try to connect devices, and disconnect them, and then reconnect them, to the male pins of the rPi connector.

So, at this stage of the game I have created a board that stays hooked up to the rPi, provides me with some basic functionality, and allows me to change hats and/or play around with different circuits without worrying so much about bad connections, or the time it takes to rewire a circuit.

Teensy GPIO 0 and 1 (RX1 and TX1) are connected to the rPi UART pins 4 and 5 (TXD and RXD) respectively.
The Pi RUN pin is connected to a PNP transistor that is controlled by Teensy GPIO 2.   When Teensy GPIO2 goes high, the Pi RUN pin is grounded, and the Pi is rebooted.    There is also a reset button wired in parallel with the transistor so you can just press the button to reboot the rPi.   The state of the rPi run pin is sensed by Teensy GPIO3, which is then reflected back out GPIO12 to a green LED.

I use the PI GPIO25 connected to TeensyGPIO4 to sense a "ready" state for the Pi.   This is simjply a single line of code in my generic Circle kernel.cpp programs, in the Run() method usually, indicating that everything is setup and the program is running correctly.   The state of the "ready sense" pin is reflected back out Teensy GPIO11 to the blue LED.

Besides that, there just an on off switch for the rPi power.   Some of this is obviously to taste, or based on your circuits, but the micro usb connector on my Pi is wearing out and I also wanted a way to provide VCC without changing wires every time I change a hat, so that is integrated into the circuit as well. 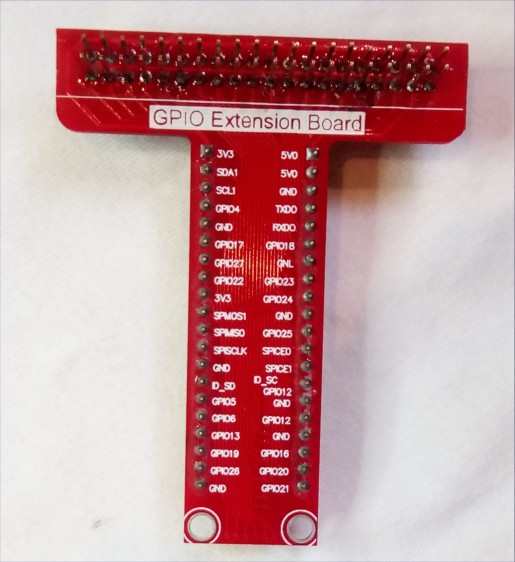 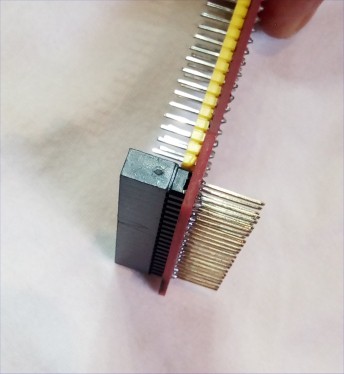 Anyways, that was the charm ... getting the breakout board turned around so that it could plug into an rPi, and a hat could plug into it.   That keeps the signal lengths relatively short to the hat, while still providing good connections to the breadboard for experimentation, etc.

As I said, this circuit can also be made separate from the breakout, on a small regular breadboard.

I really like these breadboards from http://5eboard.com ... I don't use them for every project, but when I want to make something slightly more persistent, and/or more compact, these breadboards allow you to create tighter, better organized circuits than you can with the regular breadboards.   One thing I really like is that you can change the orientation of the pins, as I do with the leds and buttons in this circuit.  I also like that you can "block off" areas with "indentation" so that you can tell where to plug a chip in, and I have even had cases where I could interleave the breadboard pieces correctly to allow me to place certain ICs right next to each other, or the MCU, by leaving some spaces open and indenting/outdenting certain pins.

They're a little pricey, but you can get 5 of em for about $20 on ebay, and that's enough to make two or three circuits like this one.

I am including an Ino script and some library files for the program I run on the Teensy.   It mostly just sits there and sends characters from the rPi to the host and vice-versa.    It has to watch for ctrl-B from the host and know it's not part of a serial upload, to reboot the Pi.   It slso monitors the state of the Pi and reflects them to the leds.

The Teensy sketch and support files are included in the Files section of this project.  Also, please see the _prh/bootloader folder in my Circle fork for the bootloader and Perl Windows program that works in conjunction with it, at https://bitbucket.org/phorton1/src-circle/src/master/

Above, the breakout board, an rPi 3b+, and the Teensy 3.2 workihg together with the AudioInjector Octo sound card.