A touchscreen control panel for Grbl controllers with MPG handwheel and hardware inputs.

This project is a Grbl-compatible CNC control panel with a 10" resistive touchscreen, hardware led cycle start, feed hold, and cycle stop buttons, custom macro buttons, spindle on and spindle off rotary switches, analog jog joystick, jog control knobs, feed override and spindle override knobs, an emergency stop, an MPG handwheel, and custom sender software. It is based on the Raspberry Pi and ATmega328P.

Consumer CNC machines and open source firmwares have come a long way in a short amount of time but still lack some features that I wanted after obtaining my first CNC.  Although MPG handwheels are common on machines running Mach or LinuxCNC, they were mostly missing from USB based CNC machines.  They are also typically driven by laptop machines instead of single purpose industrial devices.  I began this project in order to use a MPG with Grbl but it quickly grew into a full fledged CNC control panel.

The hardware consists of a 10" resistive touchscreen, hardware led cycle start, feed hold, and cycle stop buttons, custom macro buttons, spindle on and spindle off, analog jog joystick, jog control knobs, feed override and spindle override knobs, an emergency stop, and of course a MPG handwheel.  The hardware inputs all feed into an ATmega328P microcontroller.  The digital inputs are passed through 3 daisy chained 8-bit shift registers. The ATmega328P sends the state of all the buttons, touchscreen, knobs, etc to the Raspberry Pi at regular intervals over the Pi's hardware serial pins.  The entire board sits on top if the Pi as a Hat.

After selecting components, the PCB design was laid out in KiCAD and a couple of weeks later the PCBs arrived with an aluminum SMT stencil.  The stencil made it was easy to solder all the surface mount components in a toaster oven based reflow oven. 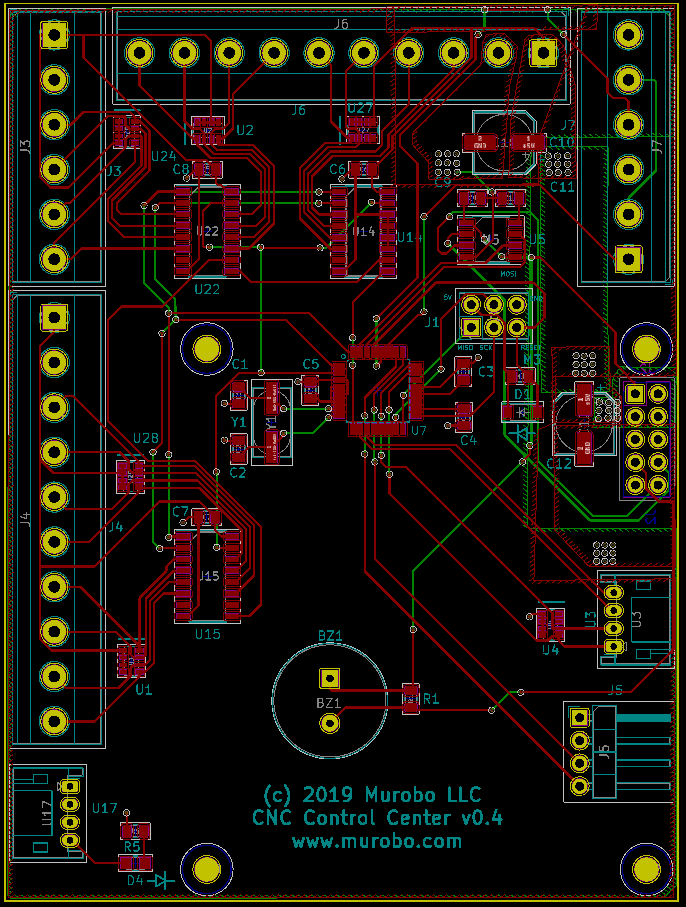 The enclosure was cut from a single 12"x24" 1/4" ABS sheet on the CNC.  The CAM work for it was performed using the FreeCAD Path workbench.  Having both CAD and CAM in the same application allowed for design parameter changes to also automatically update the tool paths.  The Path workbench supports most common machining operations as well as adaptive clearing and dressups. 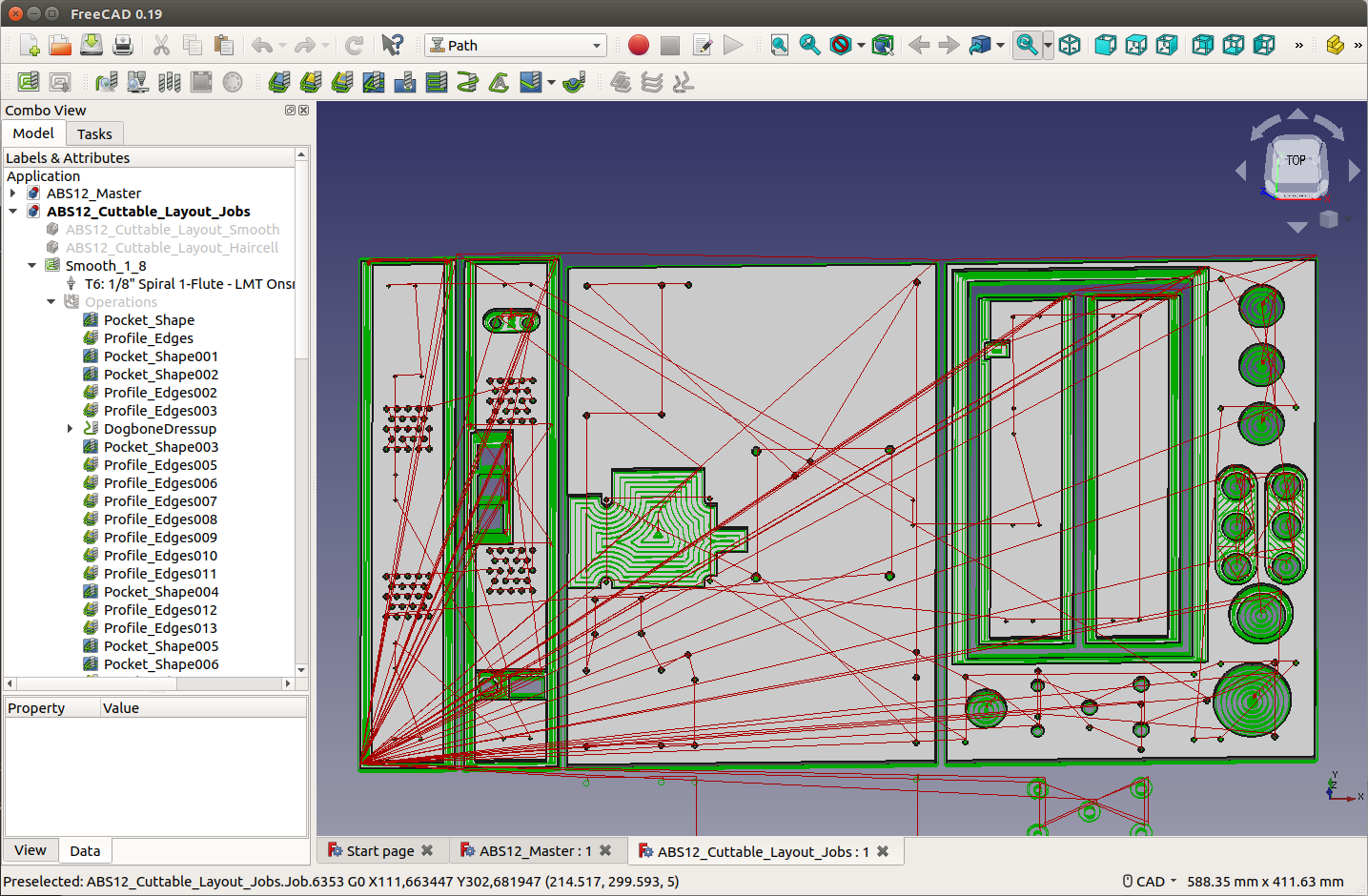 The software is written in C++ with a heavily utilization of Qt.  The software reads the touchscreen events from the microcontroller and submits them to the Linux kernel by creating a uinput device with libevdev.  This allows the resistive touchscreen to be seen as a normal input device to the application.

The application has page navigation buttons on the left and an status widget on the right that is available on all pages.  It features a DRO and buttons for the features most commonly used.

The Visual window shows a 3D preview of the tool paths.  Feeds are in green and rapids are red.  The cursor shows the current machine position. 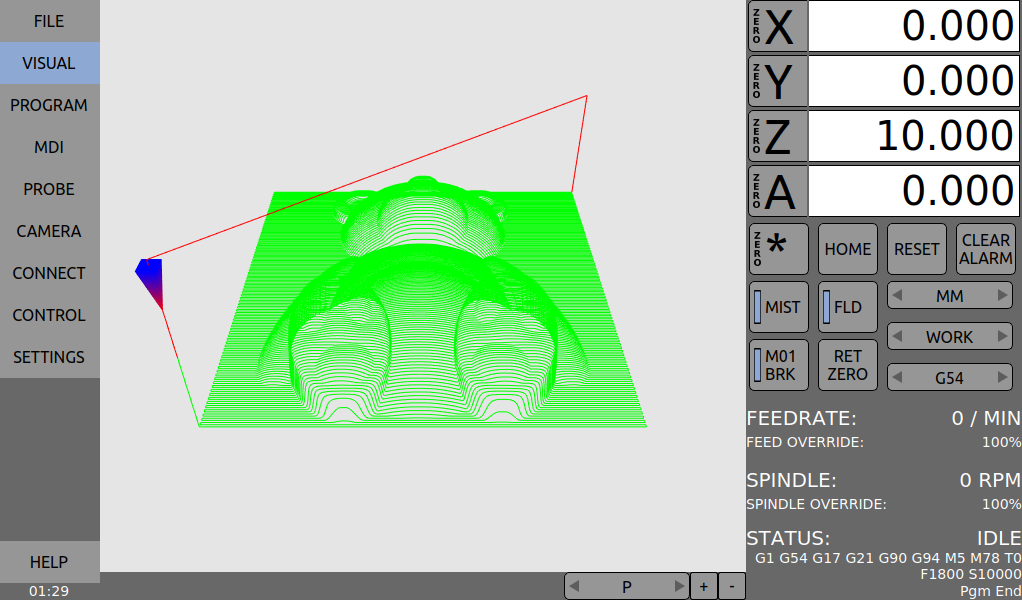 While running, visual feedback is given on the current feedrate and spindle RPM as blue bar that shows the current value with respect to the max. 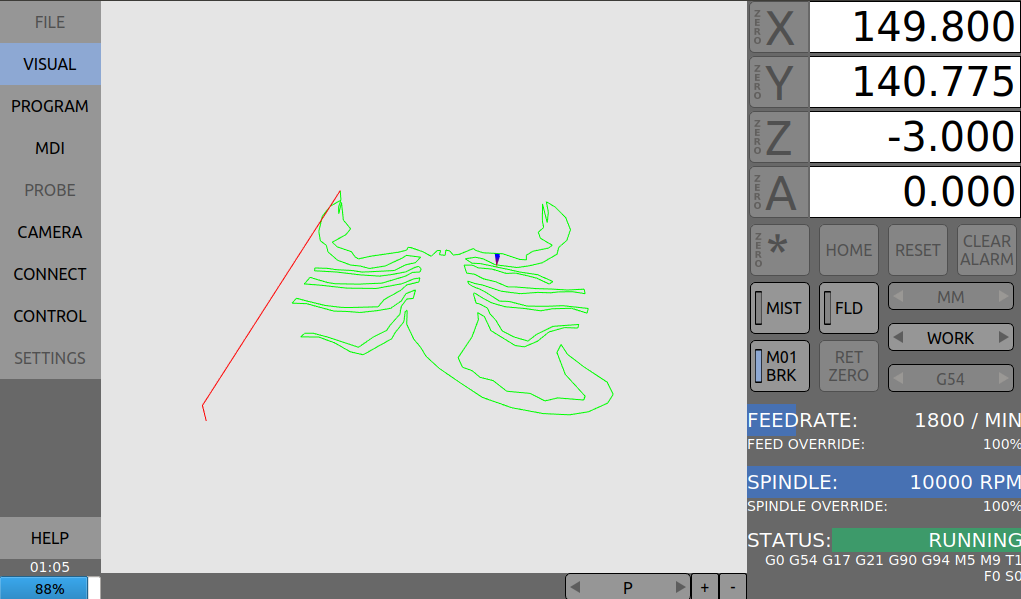 The MDI window allows for manual commands and viewing the information going to and from the machine.

The program window shows the G-Code loaded into the program. 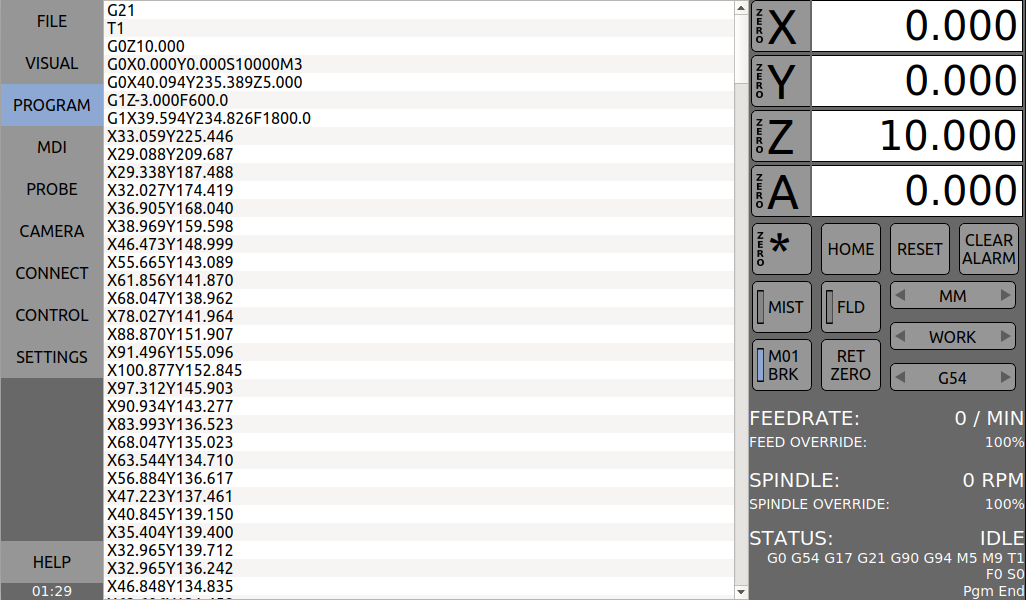 Modern platforms such as iOS and Android, that were originally designed around a touchscreen, integrate the onscreen keyboard so well that it's mostly taken for granted. Since classic platforms such as Windows and Linux/X were designed long before touchscreens were common, their integration of onscreen keyboards is often non-intuitive by comparison. On these platforms, the keyboard usually has to be manually brought up by clicking a button in the toolbar before typing can begin.  Since the platforms were not designed with onscreen keyboards in mind, most applications are not written to send the special signals to notify the system that the keyboard...

Awesome job! I would love to be able to build one of these controls for the Shariff DMC2 desktop mill I have on order.

This is exactly what I'm looking for. I have having to use a keyboard and mouse, because they get in the way/disconnected/full of dust.

Out of curiosity where did you get the dial for the movement? (the 0-100 dial for incremental movement)

Its seems a very good project for CNC machines on . The controls and options are awesome . I'm very interested in this project and I hope you will share documents on hardware and software.

Well Done!!  Open Source RaspberryPi and/or Arduino controlled CNC units are needed... the person that comes up with a CNC Metal Cutting Plasma Cutting Controller will be the Hero as that type of CNC unit will also run DIY waterjet units using the parts from high-pressure sprayers to cut thin aluminum, wood, foam, food, PCB board, Glass, stone, and many other items WaterJets are good at cutting.

Hi Uriah, this looks amazing!  Nice work :)  I think the encoder is a great input device.

My friend is building a 1.2m x 1.2m CNC mill.  I think this would be a great control solution for it.  Would you be willing to share the Gerbers / KiCAD files and software at some point?

Do you have future plans for this project?  Any chance we might see a complete solution or kit on Tindie or similar platform down the road?

Hi Robert, that's definitely an option if there is enough interest.

Would you mind sharing that owesome software? I was looking for something similar for my 13 inch display connected with rpi4 for my cnc mill.

Hi Ravi.  I'm not sure how or if I'll make the software available, but it will be some time before I do.  Thanks.

Hi Uriah. No issues. I suggest you to use grbl_esp32 by bdring which is grbl port for esp32 dev board. By that way you will get grbl on a 32 bit controller which is much faster than arduino uno. You will get almost 120kHz step frequency and esp32 is as cheap as arduino uno!

This is some impressive work. In my planning for my home machine Ive always leaned towards cnc.js running on the Pi but your software seems much more efficient with system resources.