Programmable Paddle for MSX computers using one of the cheapest Arduino boards availabe, the Digispark. Can operate either as a Vaus Arkanoid paddle or a MSX Standard paddle. It can also operate in automatic, detecting the proper operating mode according to the signals sensed on MSX joystick port.
Same firmware can be compiled for UNO and Nano boards.

This project was designed to be a minimalist, easy to replicate, cheap Paddle controller for MSX computers.

It provides two operating modes: Vaus Arkanoid Paddle and Standard MSX paddle. The operating mode is programmable and is persistent, which means that the default behavior is the last mode programmed.

The Arkanoid mode is a tore down version of #SMSX paddle ported to the Digispark .

The communication with the MSX computer follows the protocol used in Taito Arkanoid paddle (Vaus) device.

Each data bit is sampled then a brief low going clock pulse is generated by the MSX on pin 6 to shif out the next bit (data changes on risign edge). After the 9th bit is read another short going pulse is generated this time on pin 8. The rising edge of such pulse starts an ADC conversion. After the conversion is complete the most significant bit gets ready at pin 1 and the remaining bits are stored in a variable to be shifted later by pulses coming from pin 6. Button is sampled right after the conversion and pin 2 is updated accordingly.

Code is implemented using a couple of interrupts, one on pin 6 (clock shift) and another at pin 8 (start new sample). Main loop  does nothing else than put CPU to sleep. 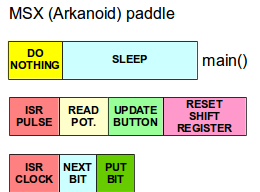 The value is read from MSX as a 9 bit value and the center value of such range is close to 256.

Timing for Potentiometer at maximum: 3058us

The selection of operating mode is done by analyzing the behavior of the Clock (pin 6) and Pulse (pin 8).

When executing Arkanoid game the MSX sends clock pulses on pin 6 during normal readings and issue a pulse on pin 8 to start a new conversion (potentiometer sampling). On the other While reading Standard Paddles the MSX only issues pulses on pin 8.

The detection routine counts both Clock and Pulse pin changes until it has detected  10 pin changes on Puse pin.

The DigitalRead( ) function is rather slow to detect all the changes and as a result the 10 pin changes detected on pin 8 will will not be equivalent to 5 full sampling cycles. For the same reason the counting of the Clock pin state changes will be far below the expected (16 changes per sampling).

Notice that the Arkanoid game uses an heuristic to select to detect the type of joystick connected. When the game runs for the first time the title screen asks for pressing Fire Button. If the game detects the DOWN directional pressed (pin 2) then it assumes that there is a Vaus controller connected, and only then starts to issue Pulse and Clock signals.

Thanks for the information. I want to know about 1password APK by https://apksharp.com/1password-apk/and how to use it. Thank you

One paddle to turn them all
Project Owner Contributor