Parties end up in the kitchen, so why not give the kitchen lamp a party mode?

A lamp to go above my kitchen island that has a normal kitchen mode, plus a party mode. The normal mode is a nice, dimmable medium-white light (3700K) with separately-controllable LEDs facing both downwards and up to bounce off the ceiling. Party mode uses ~500 individually-addressable RGB LEDs controlled over the network by TouchDesigner. This allows me to program complex music-reactive animation patterns and have them light up the entire room.

In order to remain classy, the entire lamp is shrouded in a finished walnut housing, with diffusers on both sides. All the control electronics are hidden away in a 3D printed box attached to the ceiling. The cables hanging also transmit the power/data from the control box.

All the design for this project has been done in OpenSCAD. This allows the design to be fully parametric and adjustable. 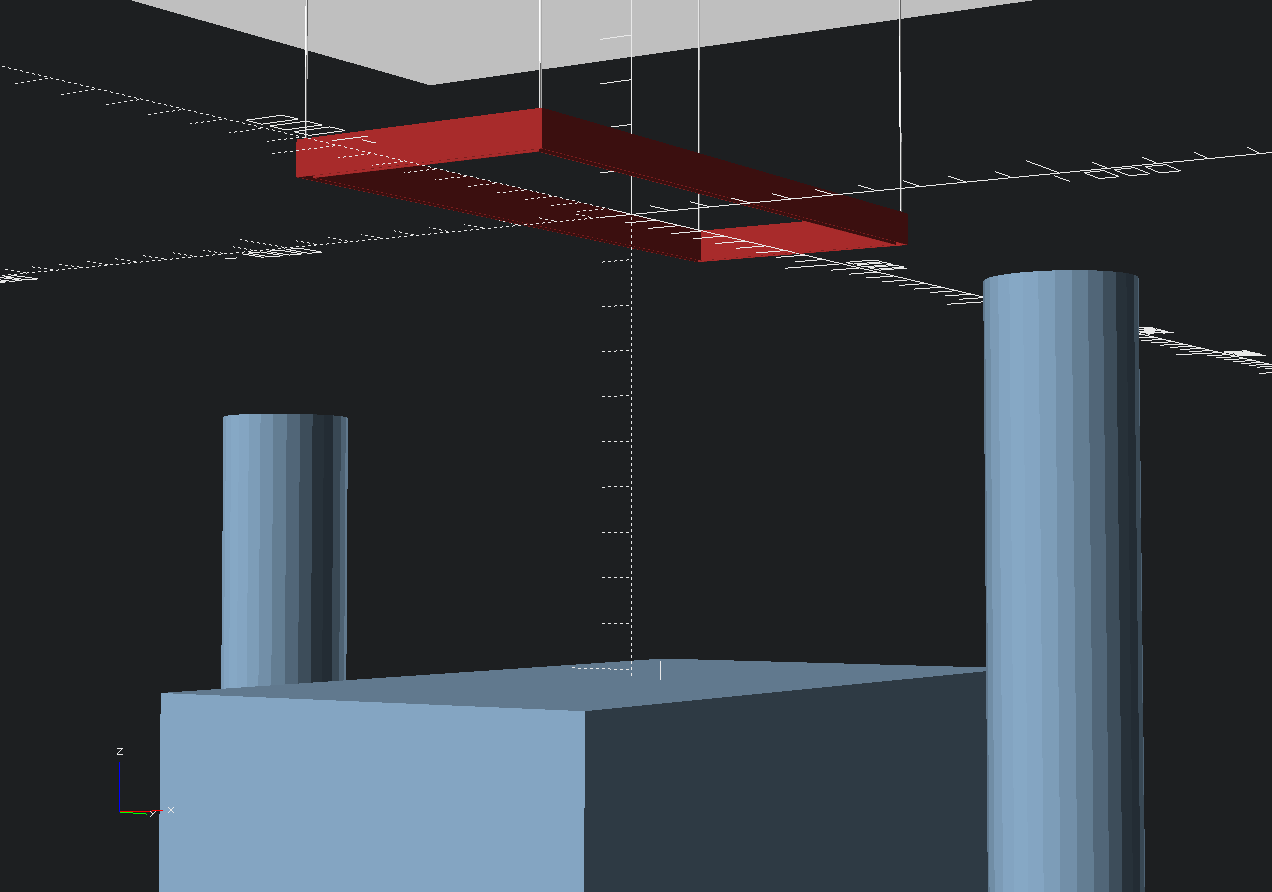 For elegance and blending into the environment, this lamp should be as slim as possible and use materials that are already found in this space. The finished walnut housing matches other wooden details already in our kitchen. Having dimmable lamps facing downward as well as upward allows for a ton of flexibility. Party mode should be invisible until it's activated, but when it's active it's on. It should tie into the other programmable LEDs being installed throughout the house.

I used WS2815 RGB LEDs both in part because the 12V power rails let me run a longer run without power injection, as well as their 2kHz PWM frequency. It's not the best on the market (that would be the SK9822 at 8kHz or APA102 at 19kHz), but at least it's not 450Hz. The DMX white LED driver I got happens to clock in at 8kHz, which was a delightful discovery.

For LED control, I'm using the Falcon F16V3 RGB LED controller. This will be used for a number of other LED art installations I'm working on around my house in addition to the kitchen lamp. This will give me a slick 30-60FPS of LED animation possibility, controllable easily through Python or TouchDesigner.

I wanted the lamp to have a classic classy look, match our dining room table which sports a dark reddish stain, and be relatively slim. I also specifically wanted the light to form a ring, as from photography I am familiar with the magical power of ring lights.

I measured the kitchen island, subtracted an amount that made logical sense, then mocked up a cardboard version to see what it would look like. With some minor tweaks, I was able to come up with some rough dimensions.

I've learned from working with LED strips for other projects that it's really useful to have your housing match the natural stride of your LED strips. That is, for the 60 LEDs/meter strips that I'm using, having the dimensions of the things the LEDs will be adhered to snap be laid out in 16.667mm (1/60/m) increments. I made sure that the white LEDs and the RGB LEDs had matching strides, though the white LEDs have their cut points in larger groups of 3. This then locked in the final dimensions of the lamp.

I knew I wanted to have the core of the lamp be rigid, possibly heat-dissipating, and easy to work with. I've been working with 80/20 extruded aluminum for another project and decided to order some of that. This made it super easy to adhere the wooden side panels to, gave the LEDs something to put some of their heat into as well as something to stick to. It's also dimensionally-precise and can be easily drilled with hand tools.

LEDs used for lighting a space work best when the...

indeed there its seeming to be an extremely special thought basically its a cutting edge days tech thought that you shared here truly great I am likewise dealing with the comparative sort of thoughts here you can see https://zlinekitchen.com/

Every home would love to have this. Great project you are working on. I would love to recommend this to my friends at www.handymanchico.com/ and https://www.pasoroblesexcavating.com/. Thank you.

What an impressive type of work you done here I fully support your idea here and would love to use it here on portable blender website you can see here.

yes there its looking like a very unique idea simply its a modern days tech idea that you shared here really impressive I am also working on the similar kind of ideas here you can see https://ultimateknifekit.com/

I like this LED design for kitchen. How can we connect it with custom board? I'm working on the impressions kitchen project, you can see here

I'm not sure I understand what you mean. Do you have an existing custom board (PCB) that you want to use?

Very slick! Nice to see you outlining the higher frequency options of LEDs. I'm also bothered by flickery LEDs - I'll definitely look into those other devices for a similar upcoming project.

I learned recently that the WS2811s have been quietly updated to no longer have the horrible 450Hz PWM! So here's hoping that everyone's LED art ends up looking great. In general, I recommend double-checking any LEDs you buy. I've gotten ones that claim to be one part, but are in fact another with a different PWM frequency.

A mix of fiberoptic cable, copper, LEDs, and a discarded 'small spotlight that looks like a rock' from a planter in our backyard.
Project Owner Contributor