CAD for a generalized linear slide

A project log for Minamil: a minimal CNC mill. And friends. 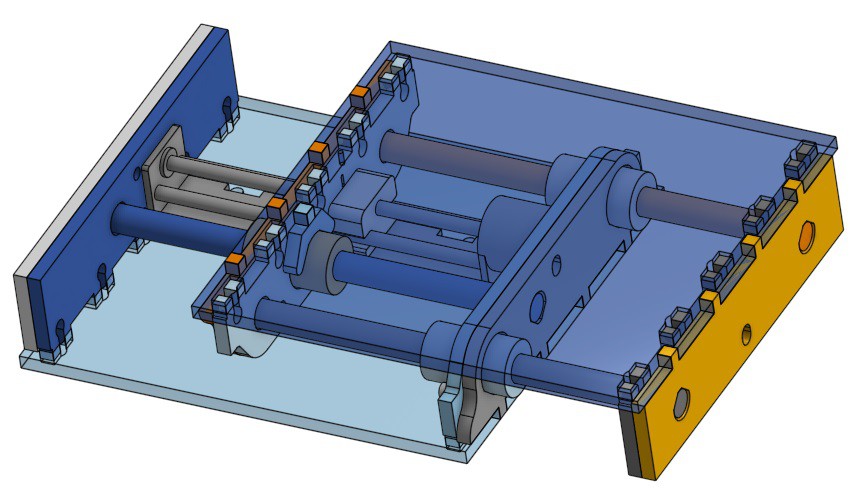 See the README tab, which refers back to a couple of log entries here for:

Please don't expect to have it working two minutes off the laser cutter. Assembly is not really trivial and still really under-documented. Working on it. Things that make it less trivial include: no template for the backlash-adjuster-locking spring yet (but a bit of tape will work) and the inconvenience that you can't build two halves and stick them together because the halves capture each other. That and ordering parts.

The mill is three of those, so a complete for-publication model shouldn’t be far behind. Modulo Christmas. And other stuff. So not promising super-soon. But working on it...

But I've come up with a simple solution -- "simple" apart from re-refactoring the CAD again which I should stop thinking about for now. The current design starts with the working parts in the middle of the "sandwich", then adds "bread" of variable thickness to each side. If the top-to-bottom thickness of the "sandwich" holds constant, then the space in between decreases with thicker material and increases with thinner material, and the height of the perpendicular end plates may increase/must decrease accordingly. So endplate area can vary inversely with material thickness; and minimum feature size -- in the plane of the material -- can vary with area available; and minimum feature cross sectional area can stay closer to constant across a range of material thickness. As a beneficial side effect, the constant exterior dimension would simplify making anything into which one of these units should fit.

I checked the first try at handwheel slides with a dial indicator and got some astonishing (to me) results. More about that "soon" -- if warranted after I get a build from this model and an indicator together.