Vectron VGA Plus v2 generates a 640x480@60Hz VGA signal and has an interface that works with retro computers or Arduino.

Vectron VGA Plus v2 generates a 640x480@60Hz VGA signal and has an interface that works with retro computers or microcontrollers. 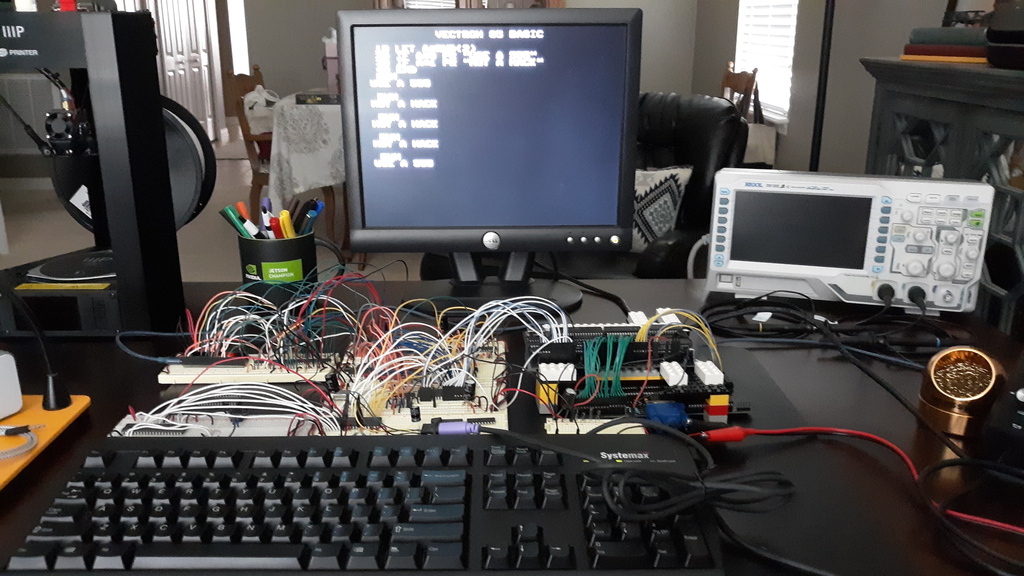 Vectron VGA Plus v2 is an improvement on the earlier design.

The key to the simplified design of the Vectron VGA Plus boards is to use more RAM and less logic. So, for example, instead of having counters and flip flops, etc. to time each horizontal sync, that logic is embedded in the data in memory. Memory addresses are sequentially incremented by an osciallator, and the contents of each memory address specify what signals to output (R/G/B/H sync/V sync). Each of these memory addresses correspond with a specific pixel location (both visible and invisible) on the display. When the end of a frame is reached, the address counters are reset, and the process starts all over to draw the next frame.

This second version offers a number of enhancements over the original:

To display graphics with the device, it first needs to be initialized with a blank screen (i.e. setting all the appropriate H syncs and V syncs), then pixels are written by setting the address pins to correspond with a pixel on screen, and the data pins to the RGB value, then issuing a simple latching signal. The details are made clear in the Arduino sketch that can be used to test the board out. The tester will produce the following display output: 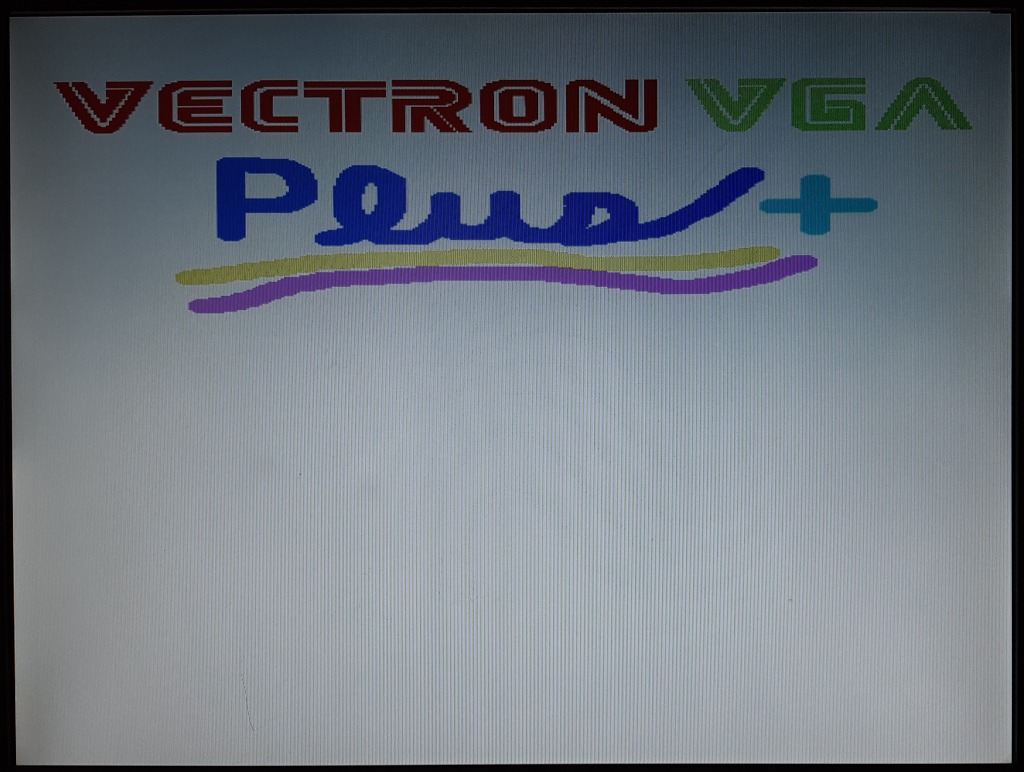 In the examples to follow, I have hooked Vectron VGA Plus v2 up to Vectron VGA Plus Text Mode, which I use to simplify drawing characters to the screen. The Text Mode module is in turn controlled by a breadboard prototype of the Vectron 65 Plus 6502 CPU-based computer (a PCB of this prototype will be created in the near future). 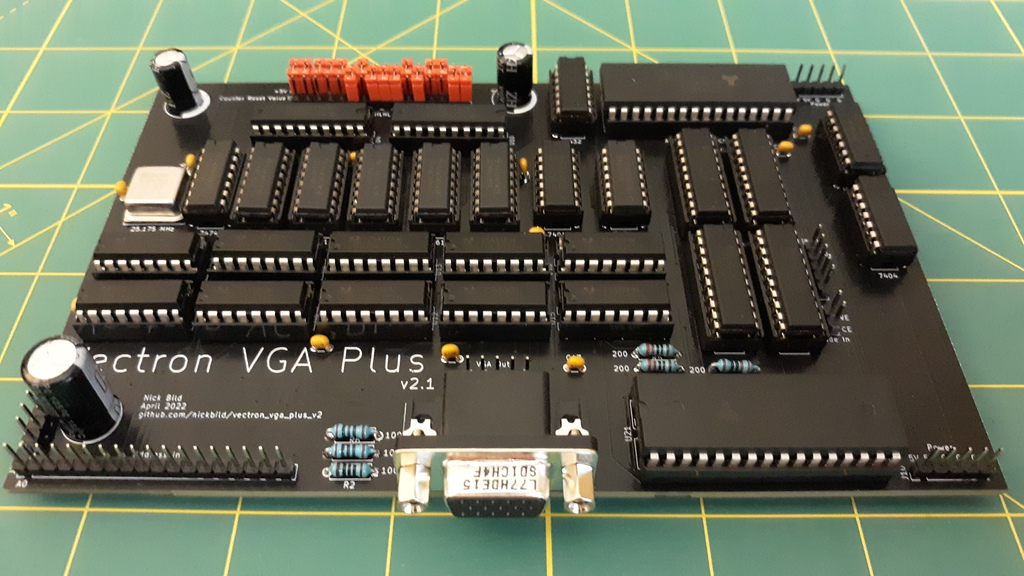 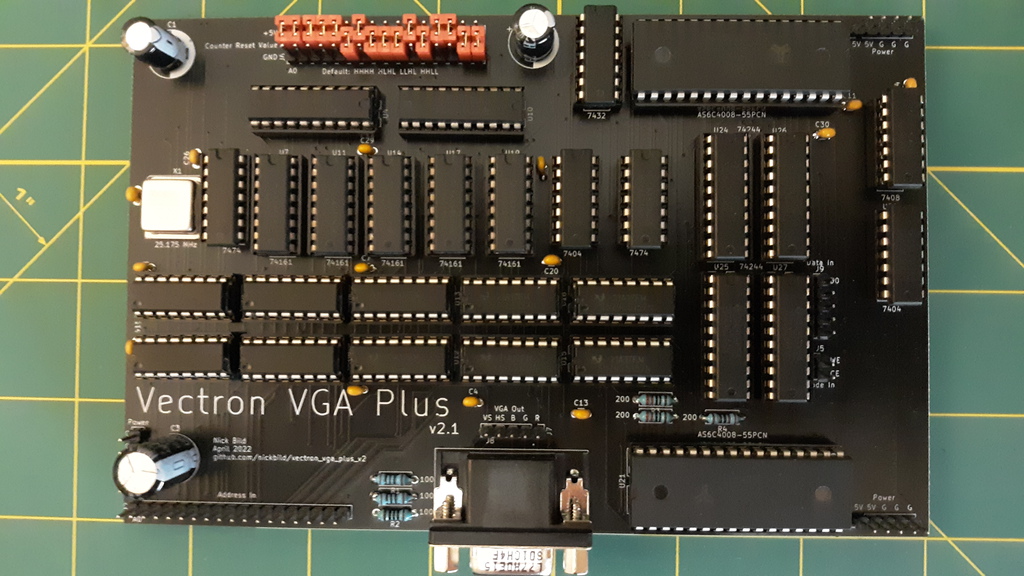 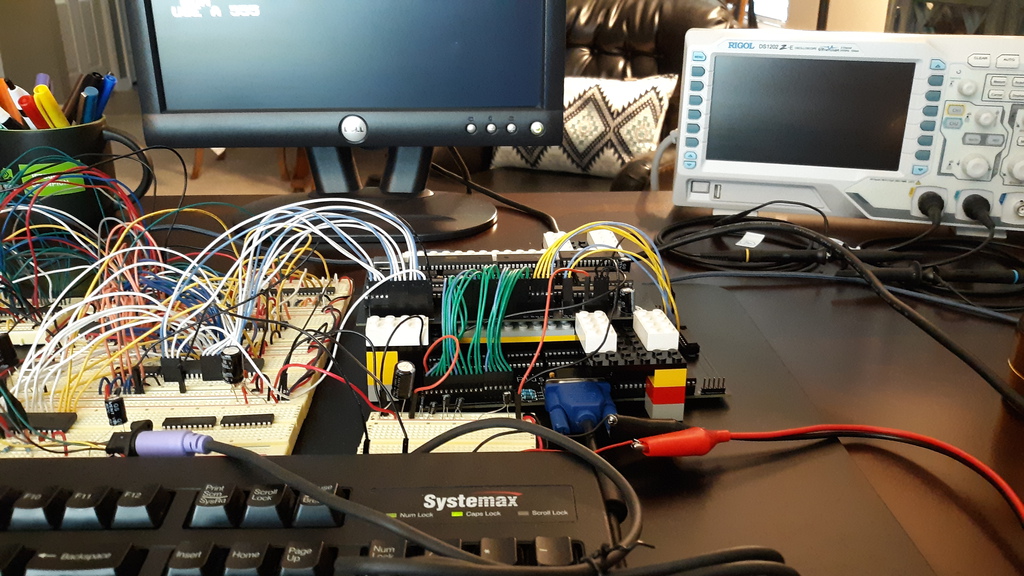 Save time with a Hackaday comments generator, requiring only four lines of BASIC: 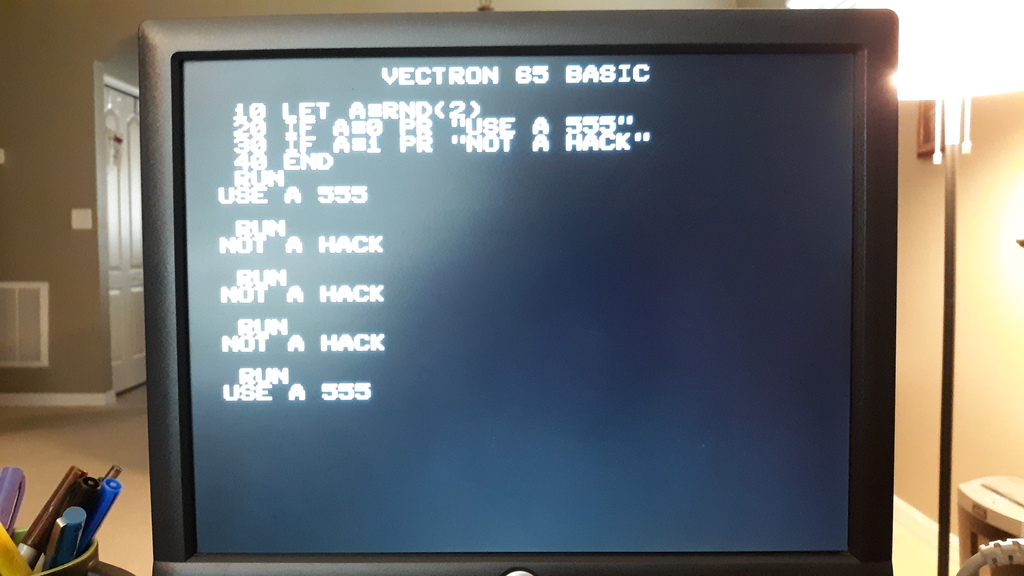 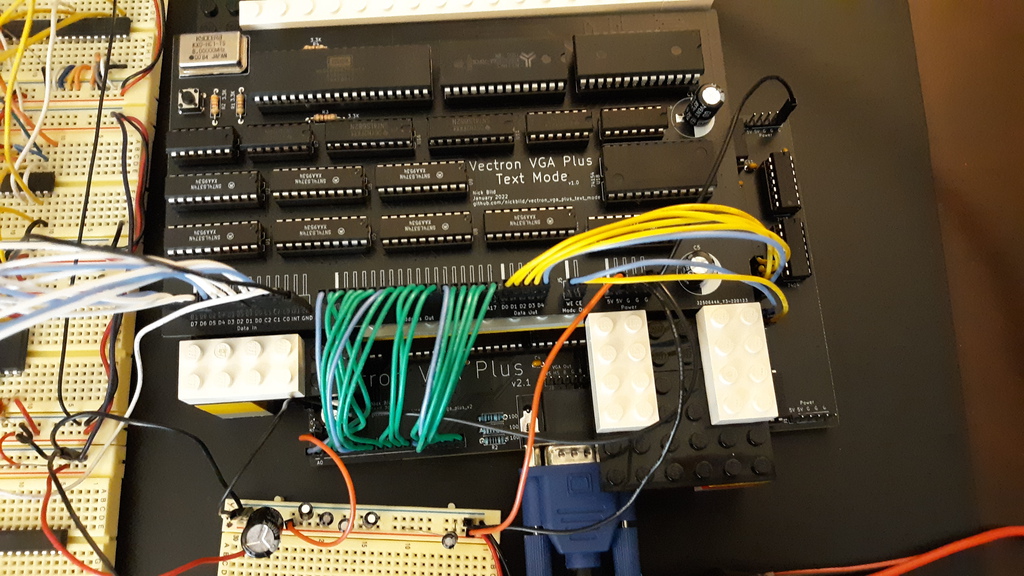 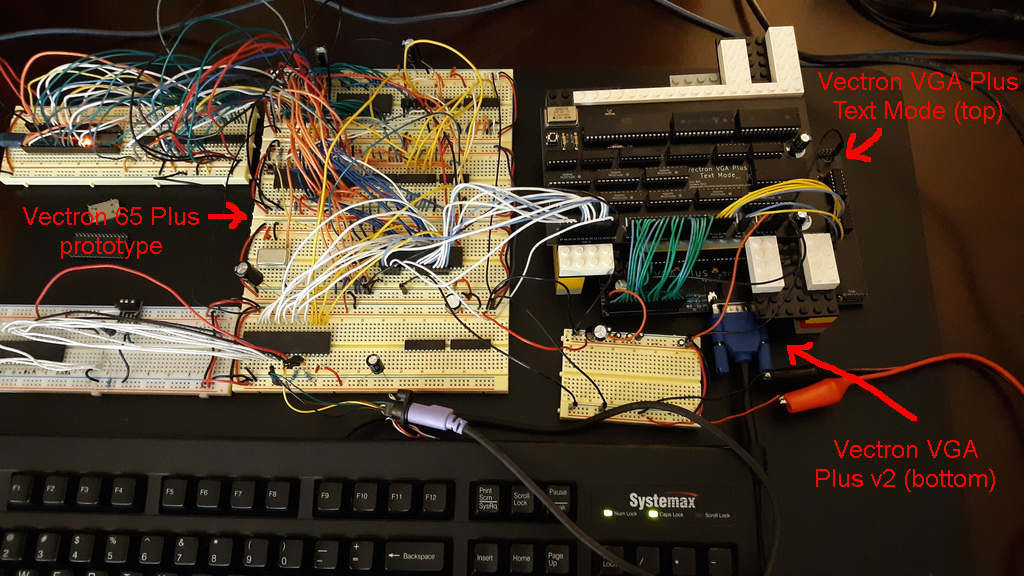 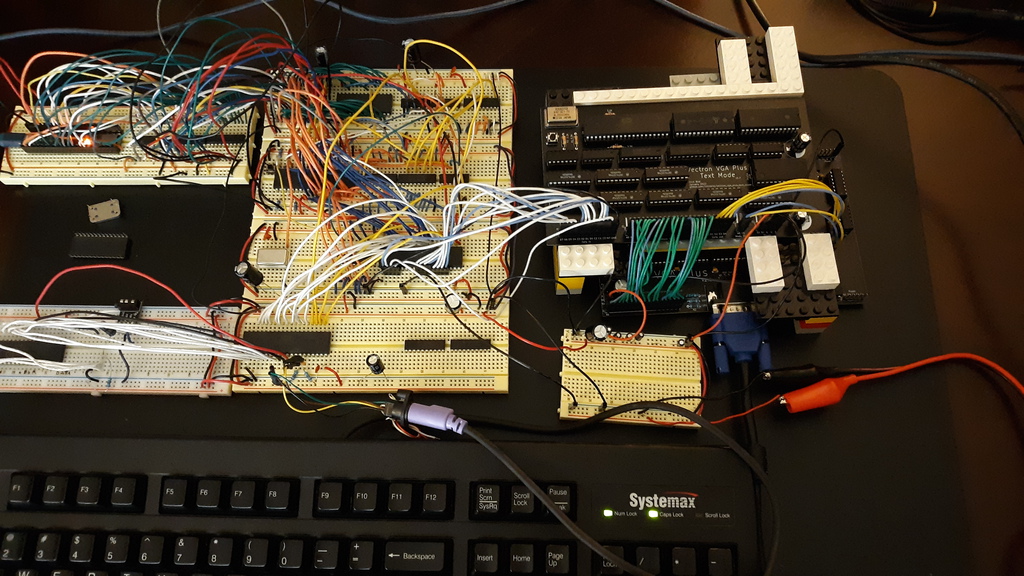 >>  main thing is to figure out best way to read/write the memory from CPU (for setpixel(), readpixel()) when the memory output is busy all the time generating both the video control signals and the pixels.

Definitely, that's why I went with 2 RAM chips and an instantaneous chip-flipping scheme that doesn't interrupt the output.  Interested to see other solutions to this problem.

Hi! I like the new and interesting concept here, image generation is always fun (I played with some similar projects too). However I don't quite get one part - is the sync / counter reset signals generation done with a separate RAM, or is it in the same RAM where the pixel data is? I was thinking of a scheme where upper nibble of video-RAM encoded 1 of 16 possible signals to generate hsync, vsync, h-counter / v-counter resets and increments, and lower 4 bits encode one of 16 colors (maybe two 74x154 for retro-coolness :-)) Given that 640*480 VGA is actually 800 pixel clocks horizontal and 525 line frames vertical, a 512k RAM could suffice. Some of those upper nibble 16 combinations could also indicate the times when CPU can access the video RAM to not interfere with image generation.

Thanks!  The H sync and V sync are just tied to bits on the data bus (i.e. output from RAM), as are the RGB values.  All output signals are encoded in RAM.  The frame reset value is done with comparators.

Cool idea you've got.  I'd like to see it working!

Oh, now I understand it better - maybe it will be one of the upcoming projects, main thing is to figure out best way to read/write the memory from CPU (for setpixel(), readpixel()) when the memory output is busy all the time generating both the video control signals and the pixels. A comparator (that triggers when CPU generated VRAM address == counter address) and latch to read / write to VRAM could be used but such interface would be veeeery slow.

Vectron VGA Plus is a VGA graphics adapter that can interface with retro computers or microcontrollers.
Project Owner Contributor

Vectron VGA generates a 640x480@60Hz 3-bit color VGA signal and is designed to interface with the Vectron 64 6502-CPU based computer.
Project Owner Contributor