For Conway's Game of Life on ATtiny84 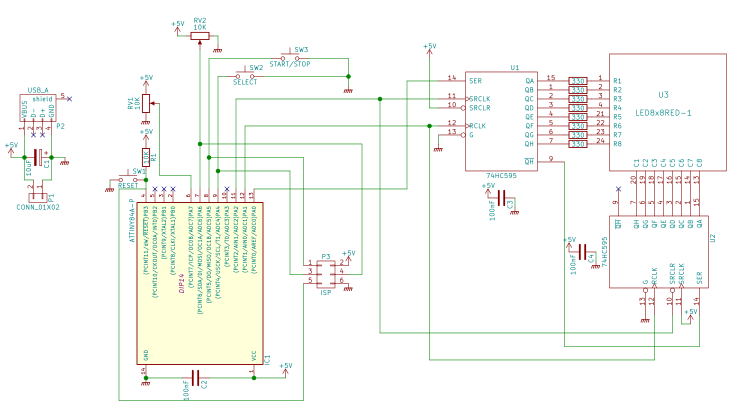 My first prototype was originally developed on an Arduino UNO (it uses an ATmega328P, compatible with ATtiny, with just more pins, more bytes and more features on chip). The advantages are first that it is easy to upload programs to an Arduino with just a USB cable, then we can use ATmega328 UART (connected to USB) to send traces to a console, which is useful for debugging the program. 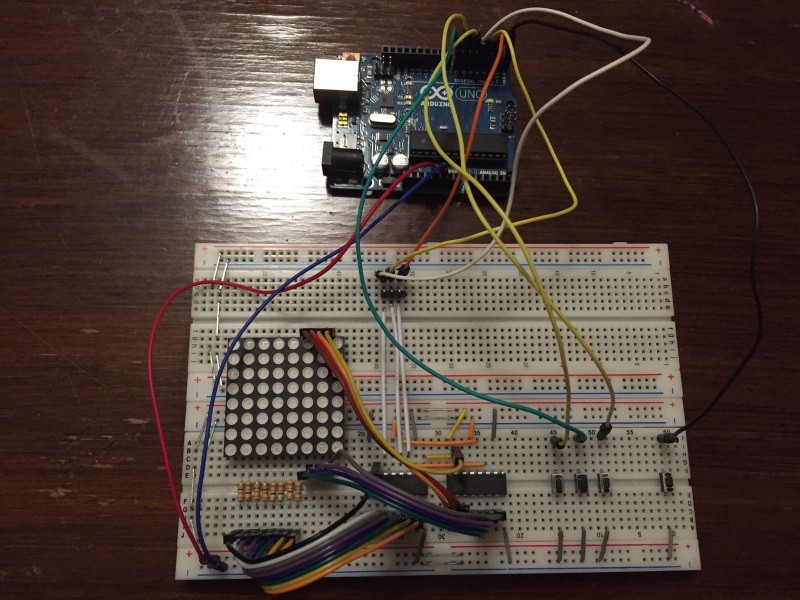 The initial prototype above does not include potentiometers yet, and only relies on buttons to select a cell in the matrix.

For the first tests on ATtiny84A, I have used a simple test board I have made in the past, that just contains the ATtiny84 with pin headers to all its pins: 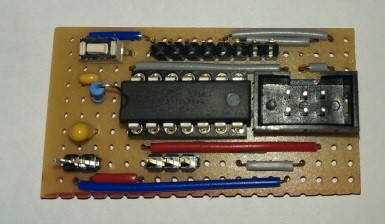 I then reused the same breadboarded circuit as before.

For the final circuit, I used two 50x90mm stripboards, stacked together, the above board containing all "UI" stuff (LED matrix, buttons, potentiometers), the under board having all electronics (MCU, IC, resistors, caps, ISP header). Both boards are stacked with pin headers, just like Arduino shields. I designed those with LochMaster.

Original LochMaster design files are available on GitHub. (these can be displayed with a free viewer). Here are drawings of the stripboards:

And here are the actual stripboards ready (without IC and LED matrix): 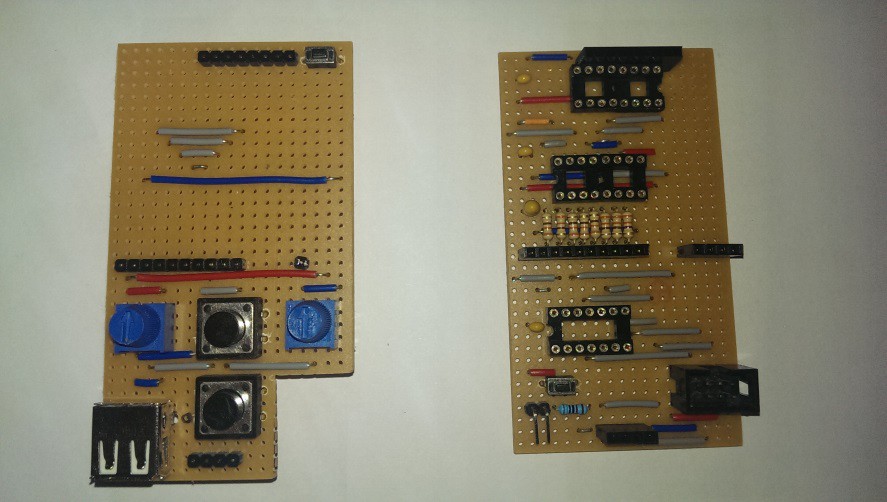 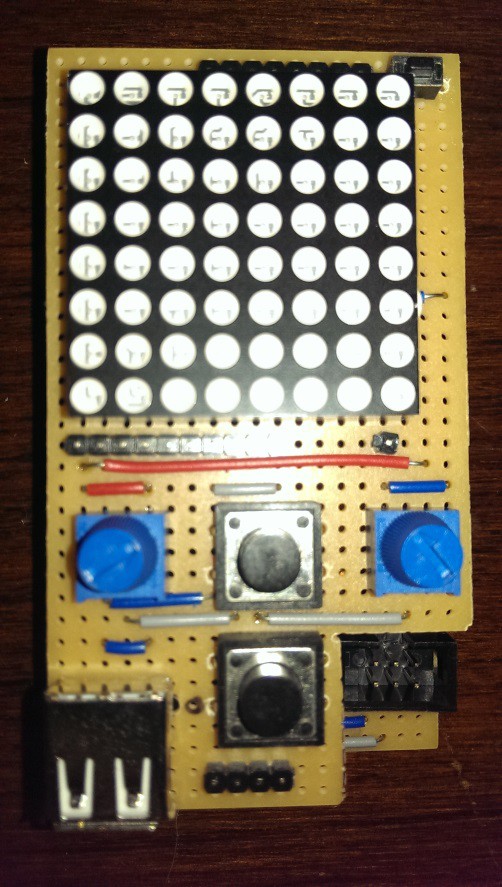 For some parts (digital IO, analog input), I decided to use some elements of my FastArduino library, which is actually a generic AVR library that I started writing in 2016, with a focus on code speed and size optimization.

I use the official ATmel AVR 8-bit Toolchain 3.5.3 - Linux 64-bit which is not the real latest toolchain (latest as of December 2016 was 3.5.4), but I guess building should work the same on latest 3.5.4 toolchain, but it may have different code size (better or worse).

Since I am currently satisfied with 3.5.3 toolchain, I do not foresee updating it within the next few months.

The program is divided into the following source files (excluding code from the FastArduino library itself):

Since the program does not use AVR Timers (see below for an explanation why), classes with methods that depend on timing, e.g. MatrixMultiplexer.refresh(), Button.state(), use an internal counter with an upper limit which is calculated based on a hard-coded delay (1ms) used by the loop of each step of the game. That makes those classes hardly reusable in a real design, where one would prefer using a hardware timer; that's the reason why they are part of the Conway example, rather than being part of the FastArduino library itself.

Since the program is fully "templatized", this means it can easily be reused to handle other sizes of LED matrices. I successfully checked it on a 16x16 LED matrix (with 4 shift registers then).

However, note that code size increases when compiled for larger matrices than 8x8:

The following video demonstrates my prototype with a 16x16 LED matrix, showing the famous "Lightweight Spaceship" pattern moving forward through the LED matrix:

How to build the program (Linux)

First off, ensure your Linux box contains the ATmel AVR 8 bit toolchain (I use 3.5.3, latest is 3.5.4) and your $PATH points to its bin directory.

The following commands show how to build the Conway 8x8 program:

The following commands will upload the generated program to your ATtiny84, connected to your box through an ArduinoISP (that is a USB-ISP programmer that is very useful for AVR programming). You may as well use other programmers for this task, but then you'll probably have to update Makefile-FastArduino.mk file (part of FastArduino library) to accomodate your programmer:

The first command sets the fuses of the MCU and is mandatory the first time you upload the program; you won't have to repeat this command on later uploads if you change the program.

Note that these "make targets" (fuses and flash) simply delegate all the work to the well-known avrdude binary, which must first be properly installed on your Linux box.

For more information on my personal build setup, you can refer to this document.

Making all the program for this game to fit within 1KB of flash has been a big challenge.

Here is a summary of the general guideline I used to squeeze code size in this project:

IMPORTANT: note that these guidelines are not always possible in all projects; for instance, it is difficult to avoid ISR when you need to perform serial communication (UART, SPI, I2C), when you need a Timer...

My build includes generation of 2 evidences that the program, built for the circuit with an 8x8 matrix, is under 1KB of code:

For an ATtiny84A (8KB available for code, 512 bytes for data), here is the output of avr-size:

The dump file includes at its beginning the list of sections with their respective sizes: