Full-featured clone of a famous “Simon” game for training your visual and acoustic memory. Electronic kit simple enough for beginners.

This project page is about an electronic set developed for ÚDiF alias Amazing Theatre of Physics.
The aim of this project is to create a simple but still playable toy which can be used to learn basic skills in electronics.

The heart of the game is ATtiny13. It is low power AVR 8-bit microcontroller with 1 kB flash memory, 64 bytes EEPROM and 64 bytes SRAM.

It has six I/O pins, from which one acts as a reset and is used to start a new game, four are connected to LEDs and buttons and the last one leads to the magnetodynamic buzzer. The device is powered from CR2032 lithium cell. 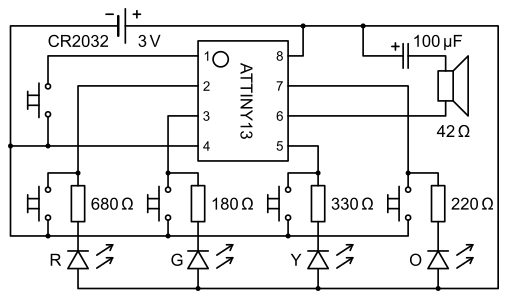 As mentioned, the device contains four LEDs of different colors (red, orange, yellow and green) connected with four button switches. (Blue or 525 nm green LEDs can't be used because they have too high forward voltage and wouldn't work well with partially discharged battery.) 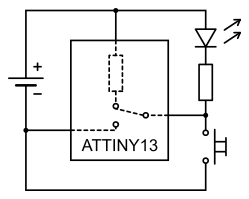 After pressing each of those buttons, the LED lights up and information about the button state can be read by a microcontroller. The pins of a microcontroller are bi-directional, so they can be changed from input to output in any time and can control LEDs instead of the buttons (see simplified diagram).

To avoid to making short-circuit on output pins, changing between input and output can be done only in low state (disabled internal pull-up resistor). Because each LED has different efficiency, resistors of different values must be connected in series with them.

The high-impedance (42 ohm) buzzer is connected in series with a capacitor (to eliminate DC voltage) to the output of internal 8-bit timer/counter. Like in an original game, each color is producing a particular tone when it is pressed or activated by the microcontroller and the frequencies are in an exact ratio 3:4:5:6 (50% duty cycle). 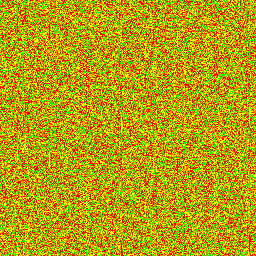 Sufficient pseudo-random sequences are generated by a linear congruential generator defined by the recurrence relation:

Eight bit pairs of 16-bit number x[i] are XORed together to produce a number 0 to 3. Quality of this generator can be checked displaying the whole 65536 elements long sequence (it is good enough for this purpose).

The value of random seed x[0] is generated from combination of non-connected input of A/D converter and jitter between watchdog timer and calibrated RC oscillator. So the probability of repeating the same sequence is very low.

The watchdog timer is used also for buttons debouncing and for auto power-off after a minute of inactivity. In power-down mode (also after the game is over) the consumption is approximately 0.15 microamps.

Best score is saved to the EEPROM (including the seed), so it is possible to re-play the best game (even after removing the battery).

The concept of this electronic set is to make it easy to build without any special tools or skills. The single-sided printed circuit board is optimized to be easily drawn by hand with a permanent marker and etched in a solution of ferric chloride (tested at summer camps and hobby groups for children).

The game can run in five modes:

Thaks you by this fantastic project!!!, We use your code as base to solder and hacking skills. Take a view: https://github.com/0dr4d3k/simon_attiny13

First, we simplify your code to less than 700 bytes and then we add some addons as player vs player mode and a happy Easer Egg as Jazz Machine genereator.

Thanks again by your work.

First of all I want to thank you! We built some of these as a school project and it was a success!

We've made schematic and layout with Multisim and Ultiboard and etched some boards.

I've got a question: why is lvl inverted when written in the EEPROM?

Data in EEPROM are stored inverted because the default values are 0xFF and I wanted these values to be interpreted as zeroes on the first use.

help i have this error

What kind of buzzer is used in this project? I usually see piezo buzzers driven by MCUs but I feel like it's not the case here... maybe an electromagnetic one? Is so what's the rationale behind that choice?

The main reason is the price. The 42 ohm electromagnetic buzzer can be found for $0.80 for 10 pcs on AliExpress.

Got it. It also sounds much better than the piezo! I'm trying different buzzer-capacitor combos. The one I've got (15 ohms) seems to work now with a 22uF cap (100uF doesn't) but I also got a weird behaviour a few times where the LED sequence would speed up with the buzzer connected. Definitely harder to drive.

I'm trying to learn more on how to drive a magnetic buzzer/sounder. Most datasheets recommend using a flyback diode and driving the buzzer with a transistor. Where did you get the idea of using a series capacitor?

Does anyone here know that the pcb layout is backwards? Need a mirror image in order to make it work on the bottom layer as in the picture.

yes I figured it out, Just can't compile the code for attiny13.

"Sketch too big; see http://www.arduino.cc/en/Guide/Troubleshooting#size for tips on reducing it.

Error compiling for board ATtiny13."

How can i fixed please

ATtiny85 uses different register names. Some changes in the source code would be necessary, according to the datasheet.

Erwin, I got the same error, to fix it, You have to make the following change:

Hello, I was about to try this myself. After opening .ino file in Arduino IDE,  I get this error: https://pastebin.com/uuhF2UWE
Just clicked Compile to check for errors, didn't set board or anything yet. Could you help me? :)

Hi. You have to add MicroCore to the Board Manager and use ATtiny13 (B.O.D.: "Disabled", Clock: "1.2 MHz", GCC Flags: "-Os"). This won't work on Arduino Nano since it doesn't use Arduino universal libraries (they are too large and ineffective for tiny microcontrollers like ATtiny13).

I flashed the Microcore bootloader (1.0.4 from https://github.com/MCUdude/MicroCore) on an ATtiny13-20PU and I can blink a LED using an Arduino board as a programmer and the Arduino IDE. I've tried compiling Simon_attiny13.ino with the settings above:

The GCC Flags option is not there anymore on Microcore 1.0.4 but inspecting

I can see the -Os flag is set:

Still the compiler fails complaining about the sketch being too big:

The size of compiled binary depends on version of avr-gcc. I am not sure which version have I used to squeeze it into 1 kB, it was probably some kind of Arduino 1.6 for Ubuntu and MicroCore available those days. If you want to compile it by yourself, you can try LFSR version, it should be a little bit smaller. No bootloader is needed. Or you can just download the compiled binary (hex file) and burn it using avrdude.

If anybody wants to build their own Simon game, Makers in Little Lisbon are organising a soldering workshop: http://mill.pt/agenda/aprende-a-soldar-3/.

Nice. I made a really similar one using a 12F675 (or 12F629, don't remember) and PICBASIC, but I suppose the random generator was less sophisticated, and had no hi-score memory.

Also, after first build, I found that larger LEDs (say 8-10 mm) could be easily placed over the push buttons (just bend the leads in the right way) so that they have a double function and lead to a polite finishing using just 4 holes on the case cover (ok, my version had no power button, just push one and the device woke up and start, after a long inactivity it went to sleep).

Great project, and the timing couldn't be better... I'm building a similar device as a Christmas present and am just starting firmware dev. Thanks for sharing!

Awesome project! You have used a lot of clever tricks and designed a wonderful UI as well as a beautiful single sided board!