This project consist on the implementation of a multicolor lamp, which swings all the colors at 24 bit depth and adjust the white saturation, through the user buttons or from serial commands.

The original code was for the Lino project which uses somehow 8kB+ of code, but was the only nice project that I had in my mind that could be submitted for the challenge.

So, instead to learn how to code in assembly and reduce the overall code as one should be, I'd preferred to use the method that will be the less valuable in a contest like the 1kB Challenge and the most difficult to implement: move all the excess on FPGA using an iCE40 Lattice stick. What an evil genius.

Moreover, some code is even more butchered by using analog debouncing circuits for the user input.

For the actual memory status, see the [FW] log. For how is designed everything, see the links and the other logs.

This projects is an hardware adaptation of a firmware based RGBW lamp. With few (a lot of) modifications it has became an huge FPGA based project.

How is made this lamp

This lamp uses an Arduino Duemilanove board, which controls 4 power LEDs, for the red, green, blue and white shades. It can be made on true 8 bit colors, but due to FPGA and memory constraints, it runs on 512 pure colors (3 effective bits per color) and on overall 4096 colors if white shades are used too. The board handle the user buttons of the eventual data stream from a PC in order to control the lamp.

The FPGA runs all the calculations that were made originally on the Atmega (which was able to represent 16.7M colors), so that the overall code is actually now less than 1024 kB. In the FPGA I tried to not implement any explicit LUT/RAM/EEPROM or any other type of memory, just raw logic.

I decided to go forward with this implementation because it is not yet meaningless, but educational (at least for myself) since the challenge is related to the code size, but not the overall (here ridiculously increased) cost. In this way I have found a way to use my new Lattice FPGA.

All the debounce is made as much possible in hardware to avoid any code. 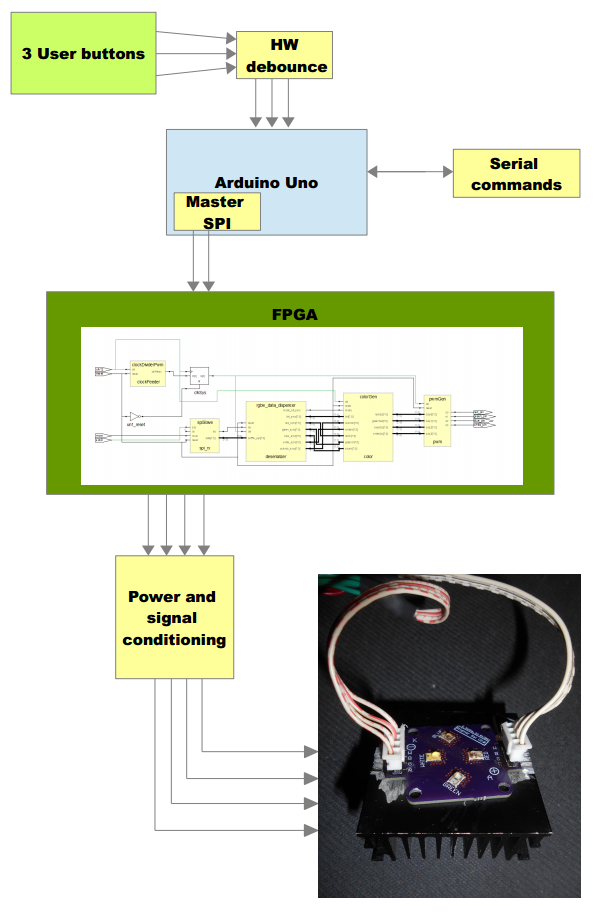 Inside the blocks are present the following modules, better described in the HW project log:

Buttons and the SPI protocol

The input is made by 3 buttons: mode, up and down. With mode, you can sweep from the white saturation, color selection, intensity. With the up and down buttons, according to the mode selected, the perfect color can be chosen, starting from the color, then adjusting its white component and finally the intensity.


The atmega handle the color selector signal, the white saturation and the uses the SPI protocol to communicate with the FPGA. This is based on a Lattice iCE40, which implements the following designs, better described in the logs:

When the user uses the buttons, the data is immediately updated and fed through the SPI. The Atmega sends the following serial data:

When a command is received from the serial interface of the Arduino, the Atmega instruct, using the SPI previously described, the FPGA to switch to the full slave mode and then represent directly the red, green, blue and white received from serial.

The protocol allow to handle and filter away any spurious character, reaching a good dependability on the communication. This is already used in my previous project.

Quoting what I have already written in my previous project, it consist in an array of 18 bytes sent from a master PC or device (over serial/USB) made by the following sequence, from the first to the last byte sent, MSB to LSB:

Where each byte is represented from LSB to MSB, the data is sent using UART (8 bits, 1 Start + 1 Stop bits, no parity).

Here below is listed the meaning of each byte:

The 2015 Hackaday Prize
CANcrusher is an Open Source CANbus development system for hackers and developers interested in a low-cost alternative to the $$$$ systems.
Project Owner Contributor