About 8 years ago I began a quest to build a machine that understood the world not as I did, but understood my world on its own terms. Despite using AI in the name, it was never an attempt at Artificial Intelligence. 5 years later I'd designed and built a semi-quadruped robot with 'hands' that it could walk on, handle things like cloth, paper, pencils, small blocks etc, as well as use to point and gesture. Dubbed AIME, it was intended to be a companion for my daughter whose communication issues meant that it had to depend on situational awareness and make decisions.

It has been three years since an infinitely wise authority intervened, institutionalising my daughter and throwing me to the wolves. My work destroyed, indebted and branded insane, it took me a year to recover physically, regain my status as carer and advocate and another 2 years to make a new home and life.

These are parts of AIME's operating system that I am beginning to shoe-horn into a Raspberry Pi or more probably a few Zero's networked together inside a smaller and less sophisticated quadruped. AIME was 3.2GHz dual-core intel powered and a lot more complex so it's a lot of work, and I have many interests that I've never managed to reconcile in one place. Robotics probably comes closest, but I think it would take a lottery win to get me that secret laboratory I've dreamed of for decades. 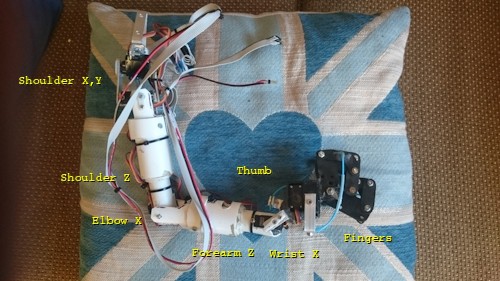 AIME had two Arduinos, one to control each arm (8 servos) and leg (3 servos) and head (2 servos, one Arduino for X, the other for Y), and a pair of cameras. 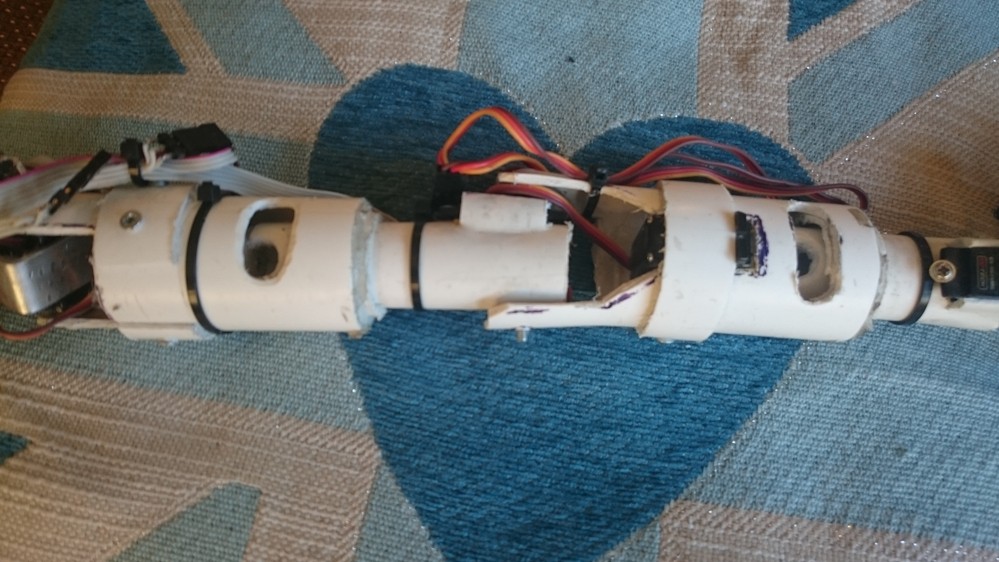 The Quad has 13 servos total, three in each leg and one to tilt the camera up and down. It doesnt have hands either. 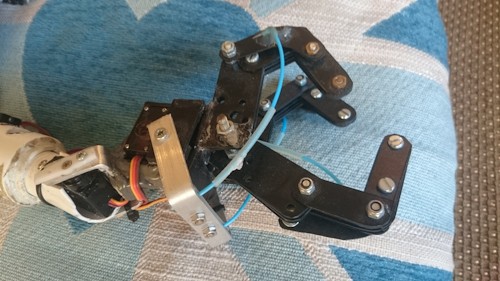 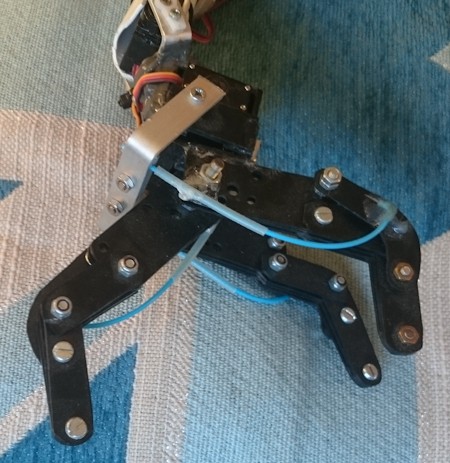 If I wanted to take over the world with my robots, I'd have done it by now.Thats my daughter Bea in the background quietly doing her jigsaw puzzle...

This is the Quad. Its got a frozen servo I'll have to swap out when I have time and it needs a board with a couple of ULN2804a (6v) drivers and some Darlingtons. Ive just unboxed it to post for now but it is nearly ready to go and has been for a few years.

Thats an ATMega1284PPU. I'm using the extra pins to multiplex the batteries, which is the reason for the wide power bus. There's 13 servos and most of the weight is on four of them. They run on 6v, powered by 15 1.2v NIMH batteries so I decided to implement bank management, and feed the hungry servos off the best cells using a slow average. The Pi and Mega have their own separate bank to power the brain that will still outlast the main cells.

The main power bank is charged with a 19v supply in parallel using a resistive ladder. It takes a while but it gets there in the end.

One of the first things my mill is going to do, is cut protoboard for these horrible SMD components. My idea is an axonometric grid of round pads joined together by a grid of traces I can cut and drop a component over, or isolate a line of them for a track. When I have the funds, I think I'll get OSHPark to make me some pretty ones for this. Here's the 13th servo, it tilts the camera up and down. 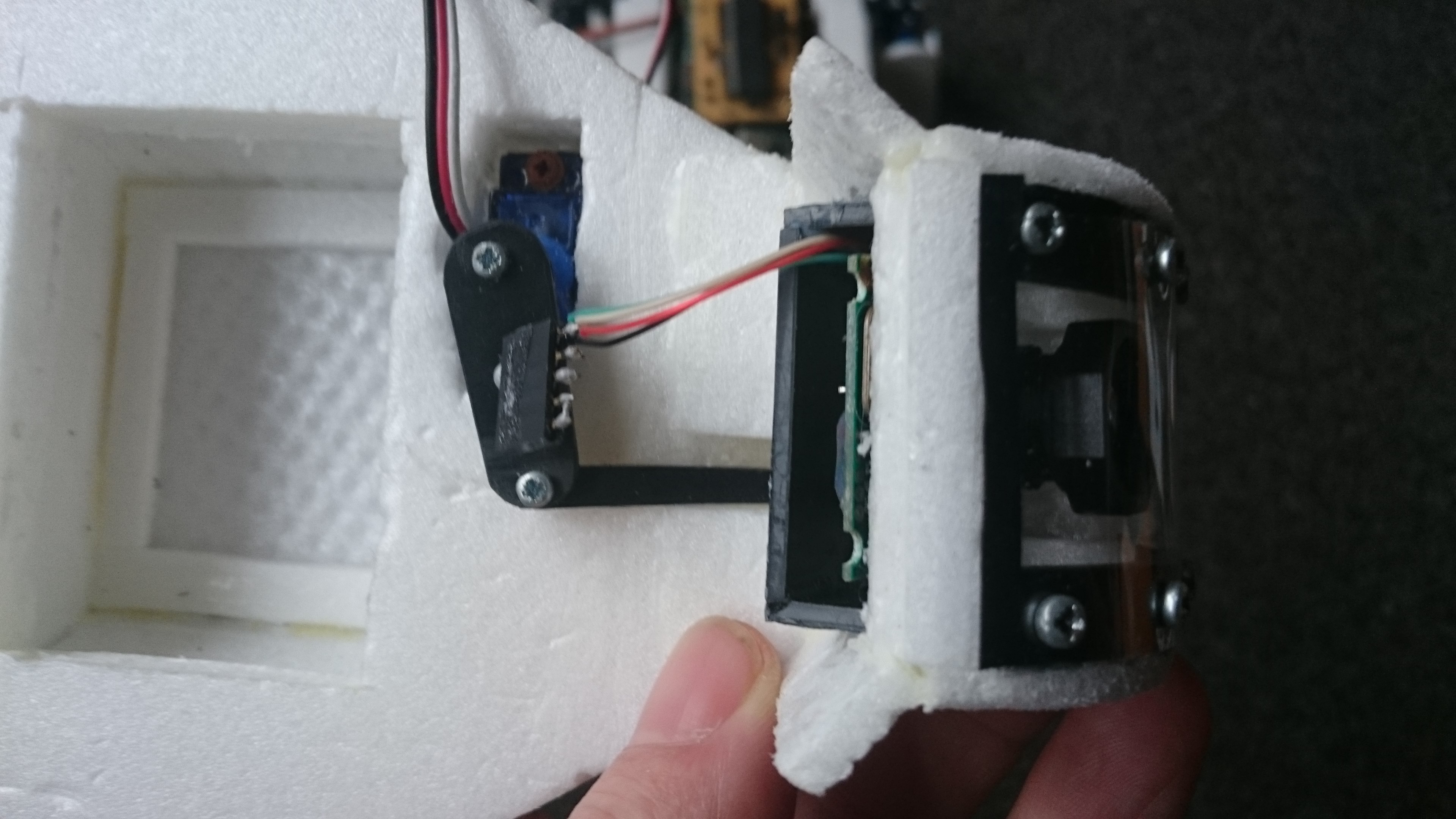 The entire thing is built out of pizza rounds, each layer cut to shape with a scalpel and glued together, then finished with sandpaper. When someone manages to build a 3D printer that can print this stuff, let me know. WOOT...

The chassis is polycarbonate sheet bonded with accelerated superglue. I cut it with a scalpel and protractor to score the shapes I need for each part, then snap them up and glue them together. Its fast, accurate, clean, and leaves very little waste. The entire robot came out of a single piece a bit bigger than an A4 card. It costs a few quid/bucks a sheet, and is very strong for it's weight. 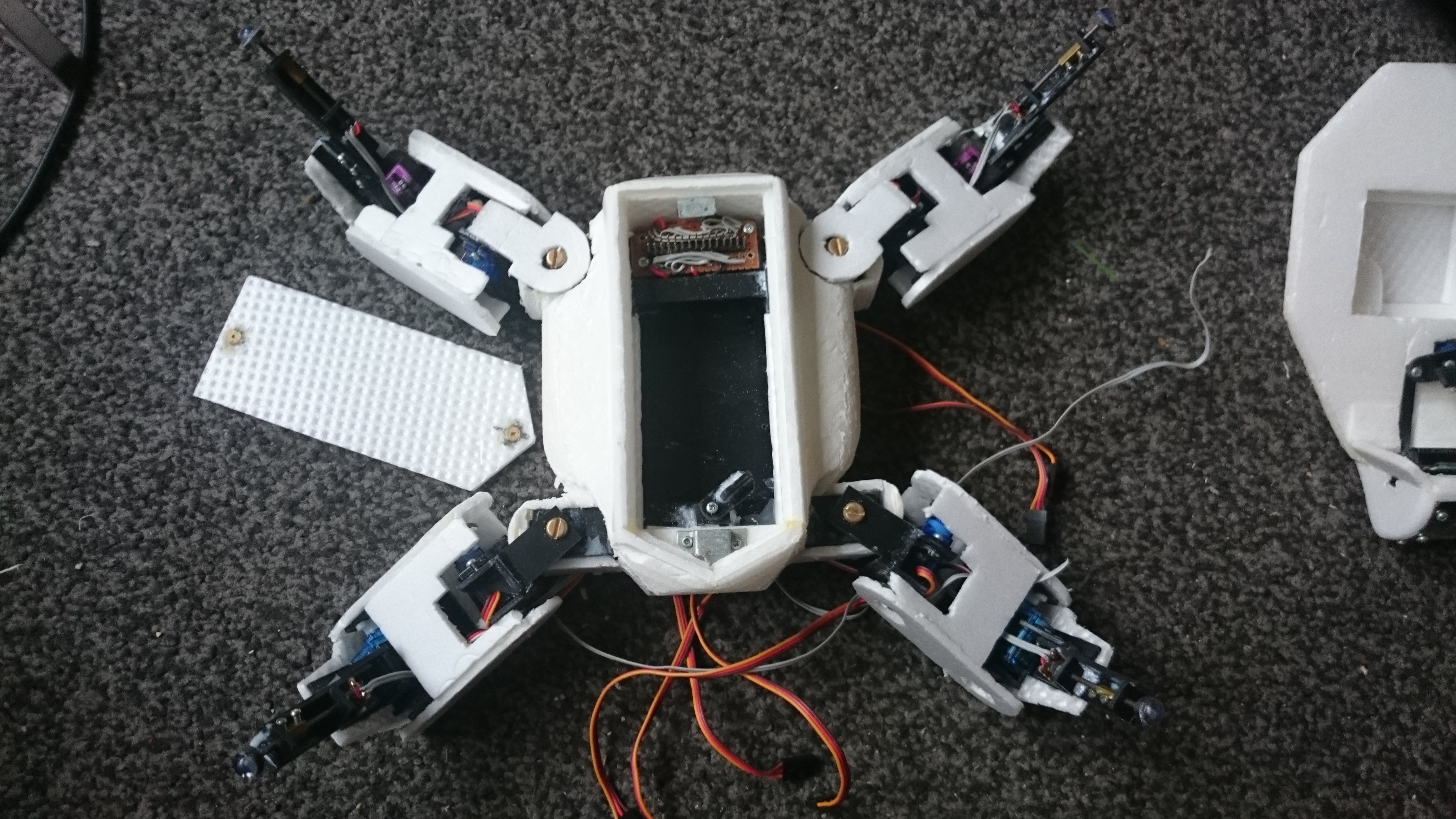 Once I built the chassis I dropped the shell around it and glued the two halves together. The battery hatch is secured by little magnets glued into recesses, the lid will be the same.

The feet have sensors connected to the Analog Inputs on the Mega. The controller will sample these at a decent rate to get an idea of what surface it is walking on, and I intend to build in behaviours like investigating things with an exploratory poke. 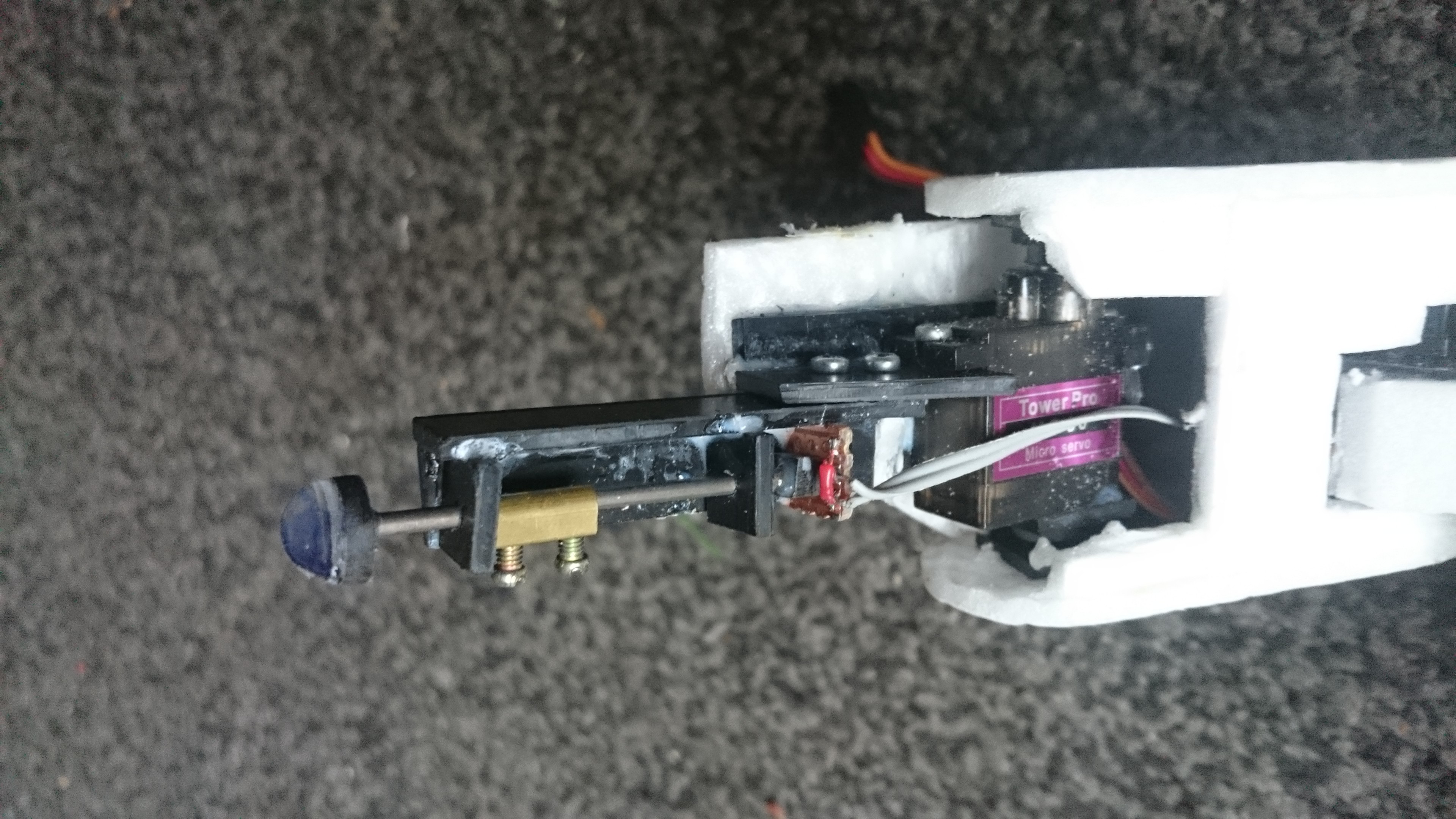 In there is a piston compressing a pressure sensitive polymer against two tracks of a bit of Veroboard. I was too lazy to etch 4 pads... The polymer is a QTC Pill - Quantum Tunnelling Compound, an amazing invention. Its a non conductive polymer rubber until you apply pressure to it, then it responds with a fairly linear decrease in resistance down to a few KOhms before material failure. It's in remote controls, lift doors and other places where solid state sensing of pressure is preferable.

It can even pick up low frequency vibrations, although I havent tested this yet, just observed the response on a scope. As a rubbery material I'm guessing the bandwidth might include the lowest octave. 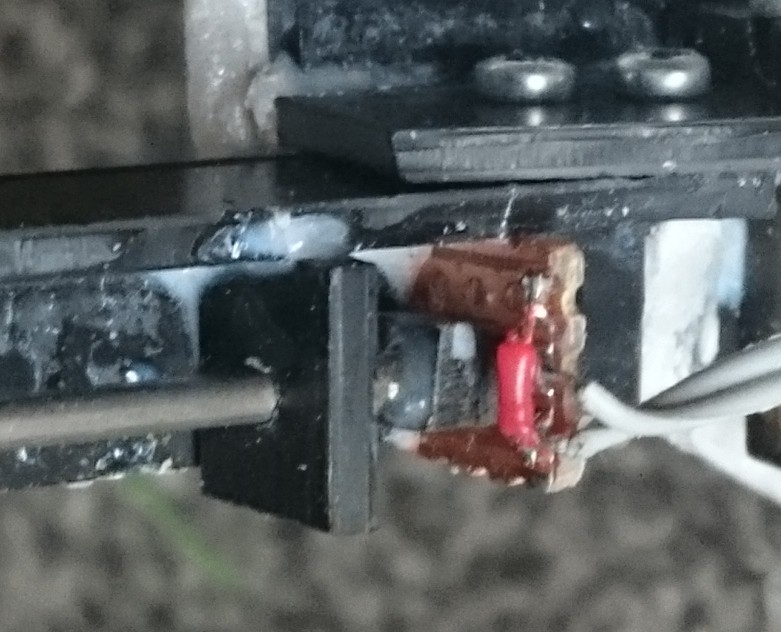 The motion tracking system for AIMos is based on a...

The 2017 Hackaday Prize
An educational system designed to bring AI and complex robotics into the home and school on a budget.
Project Owner Contributor