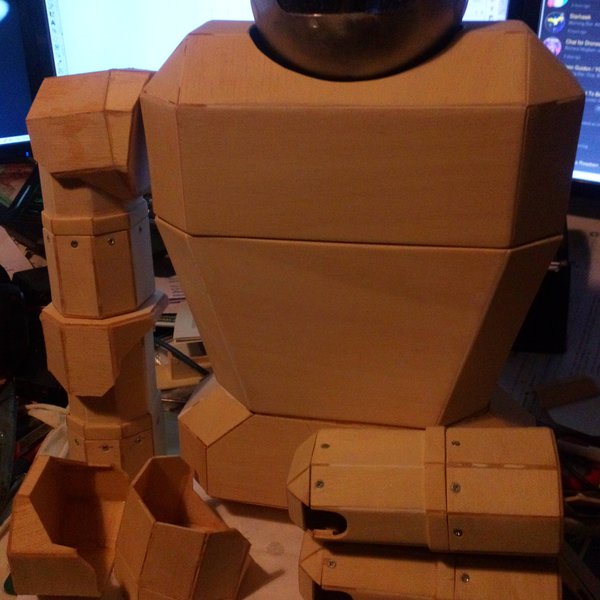 3.6k 3.5k 20 47
An educational system designed to bring AI and complex robotics into the home and school on a budget.
Project Owner Contributor

11k 1.9k 2 38
A quick and dirty antenna to save me buying Yet Another Dongle just to get Bluetooth in my garden. Also works with WiFi dongles...
Project Owner Contributor

14.2k 1.6k 66 133
My goal is a 4-bit CPU using recycled cardboard substrate and Diode Transistor Logic. This is an educational platform for me.
Project Owner Contributor

The Cardboard Computer - IO is my name

6.7k 51 3 54
Distilling my experience and wisdom about the architecture, organisation and design choices of my CPUs
Project Owner Contributor

Neat, a waterproof quad core with Linux under the hood. Before this a Galaxy S3, a Nokia E7 and a Moto A1000. This one features a magnetic latch that does itself up when placed on my wrist, and a shielded compartment for my card.

My work and inspiration begins here. This is command central, a hand built Athlon X2 with a triple head GPU, running Mint and a lot of hand written code. Its networked to a bunch of Pi's and the core of an unfinished 3D printer/6 axis mill...

Not exactly a project, but when I'm not caring for my daughter or building mental things I play one of these.

Ive made quite a few hats. For a while I had dreadlocks, and theres nothing like an awesome hat to keep them in.

An upcycled bench made for a friend's garden.

Geordie, La Forge ;-) A charcoal fired Helical forge without the fan-box fitted. It will melt copper with patience, but aluminium is much easier to handle.

Built using the new Raspberry Pi and the Atmel controllers from AIME, this was a lot smaller and lighter. Constructed from polycarbonate and styrene rounds from supermarket pizza. I'm considering replacing the model A Pi with 3 Zeros.

Bear Like Autonomous Interactive Robot. Predecessor to AIME, sort of like a room guard, monitor and communications system.

The operating system for AIME, Blair, and the quad. It is a suite of modules written in Gnu C++ strung together in Python that provide image recognition and behavioural processing to my hardware. I dont use OpenCV or any AI tools.

Autonomous Interactive Machine Entity. Originally designed to interact with my daughter, who is profoundly disabled. Lack of decent servos meant AIME shuffled like a gorilla. But she could follow your face and recognise basic hand signs.

Using parts from an old Overhead Projector and a TFT monitor, some plywood and some ingenuity I built a TV and monitor that covered an entire wall. Great for XBox!

10.4k 182 14 133
In this project we try to build a cheap AR module that you can use with your regular glasses.
Project Owner Contributor

3.3k 12 8 17
I'll assemble a PCB with a couple of very small components every week and track the effect of moon phase on tombstoning.
Project Owner Contributor

Effect of moon phase on tombstoning

Light Logic - Diode Resistor Logic out of its cage

289 8 0 10
Building a computer into a rather sizable trackball...
Project Owner Contributor

Childs keyboard from the thrift store

Thanky kindly for the like/follow of #Light Logic - Diode Resistor Logic out of its cage  :-D

Hey there my friend and thanks for the follow and like for #My first Fursuit - Yes I am a Furry  adventure :-)

So mixed up in the day-to-day I clean forgot until now. XD

Thank you @Morning.Star for the like of my #REMB - Razor Electric Mountain Board project.. before it even had that goal.. or that name.  You have faith brother..  :)

Dreaming.. is the start of a lot of great things here.  :)

Good Morning, Star ! Thanks for liking #NeuronZoo and the #4 bit TTL ALU !

Thank you @Morning.Star  for following me..

Hi @Morning.Star and thank you for following my #Featured Projects list.

Hey Roelh :-)
No problem, thats some clever stuff going on in there. +1 for NOT using Flep as a noun. That would be daft, right? XD

Greetings @Morning.Star .  Hope Bea is doing well (and you of course).  Thank you for the like of my #P1 - Lego compatible drag feeder

How could I not, thats just crazy, man :-D Cant wait to see it!

Thanks, I'm doing great, Bea's managing ok but they arent looking after her like I do. I'm kicking their sorry arses for it, BRB lol.

Hey MS. Thanks for the new likes, and well-wishes! It really means a lot. Hoping for the best for you and Bea!

Hey hey, Thank you ! the remote control is a small project for a great service

I'm embarrassed, David, I thought, assumed I had already. I remember your warm welcome, I'm so sorry...

Don't be embarrassed, we are all human after all...

Create your Hackaday.io profile like Morning.Star and many others