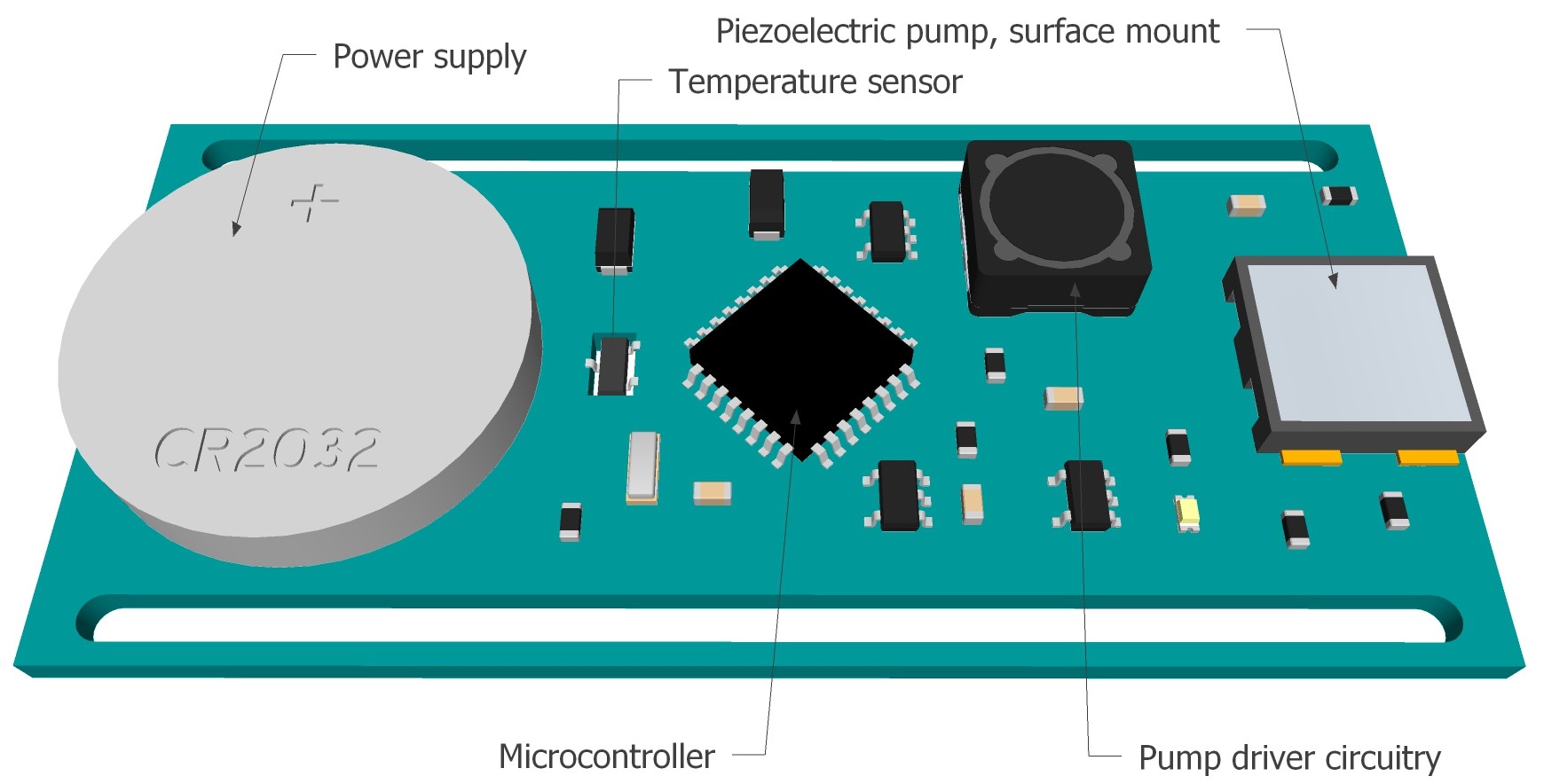 As far as I know the only available surface mount piezoelectric pump is the one from dolomite, but the datasheet is really a disaster. There is a lot of important information missing. I have contacted the company and got a prompt response:

With regards to the Piezoelectric Pump with Surface Mount, the electrodes are paired on the same side as detailed in the diagrams.

One of the two connections on one side of the surface mount would be used to connect to HV pad, whilst one of two electrodes on the other side would connect to the GND pad on the control board. These correspond to the pin-outs on our regular Stainless Steel Piezoelectric Pumps, these are specified on page 14 of the technical note.

The pump has been designed to be operated uni-polar. However, the pump can be operated bipolar as long as you keep to the following:

Please do not use with higher voltage than stipulated. With drive voltage more than +/-60V, you have to arrange Offset with no less than –60V. In this case, you cannot operate the pump bipolar.

To learn more about the surface mounted piezo pump I designed a breakout board for the pump and ordered an I2C based piezo driver utilizing the DRV2667 from tindie. 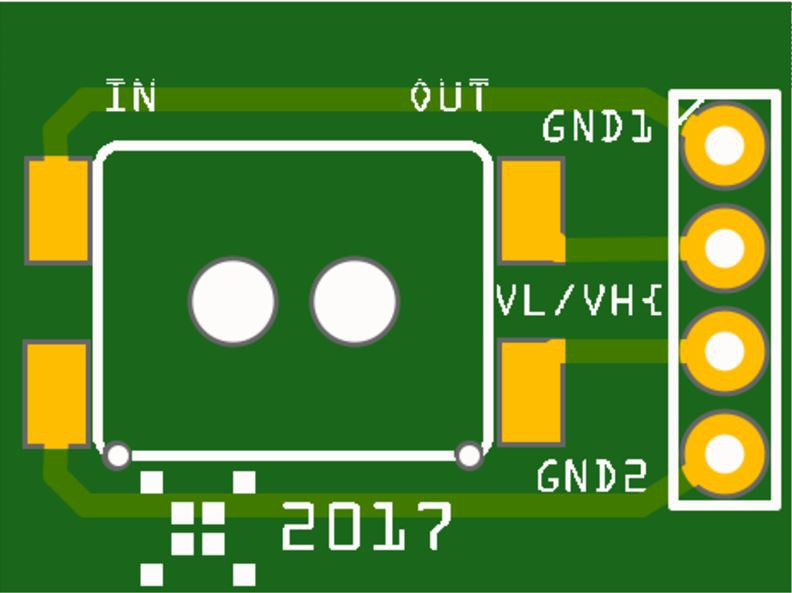 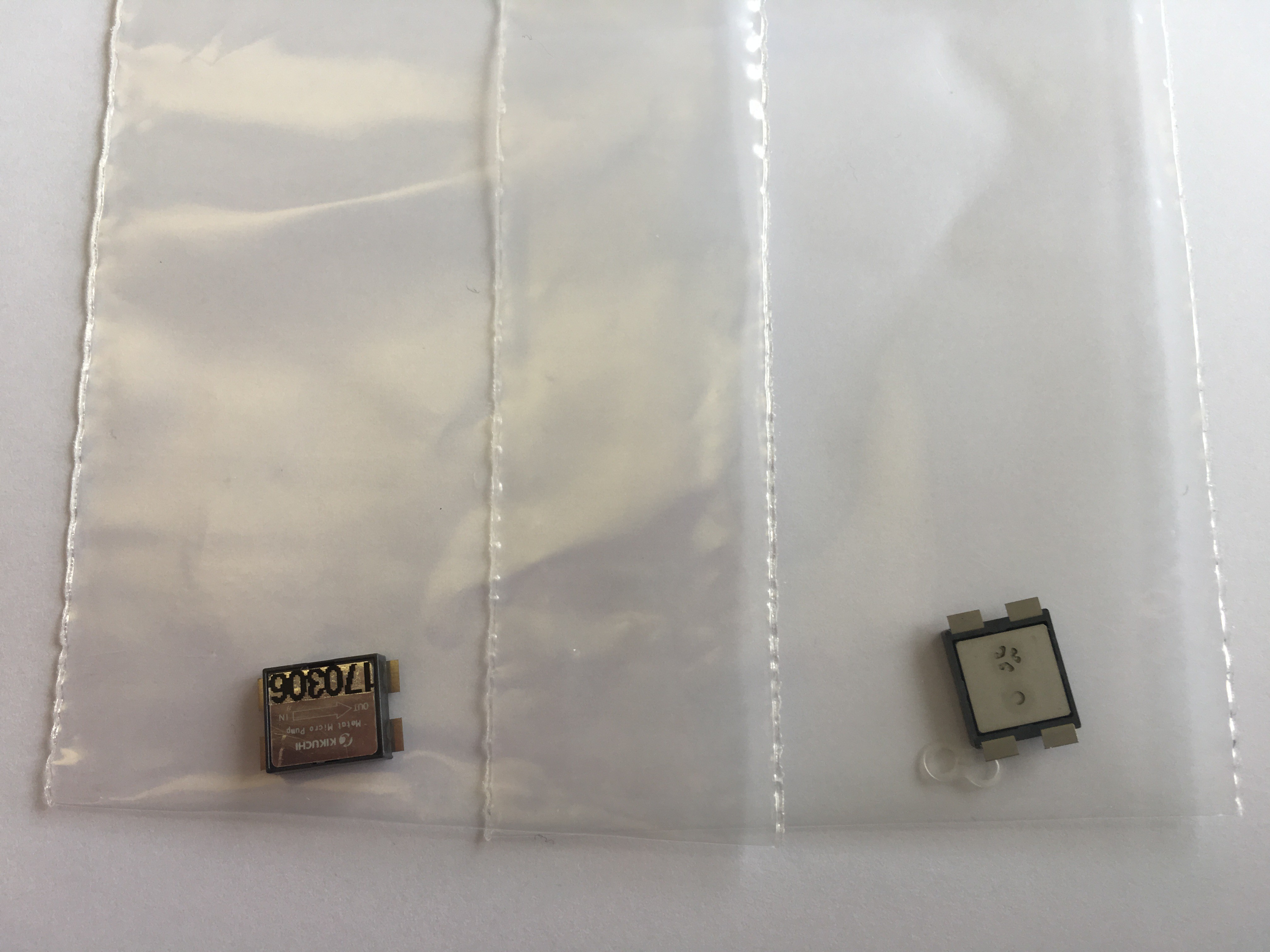 And finally several weeks later the breakout boards to test the SMD pump arrived as well... 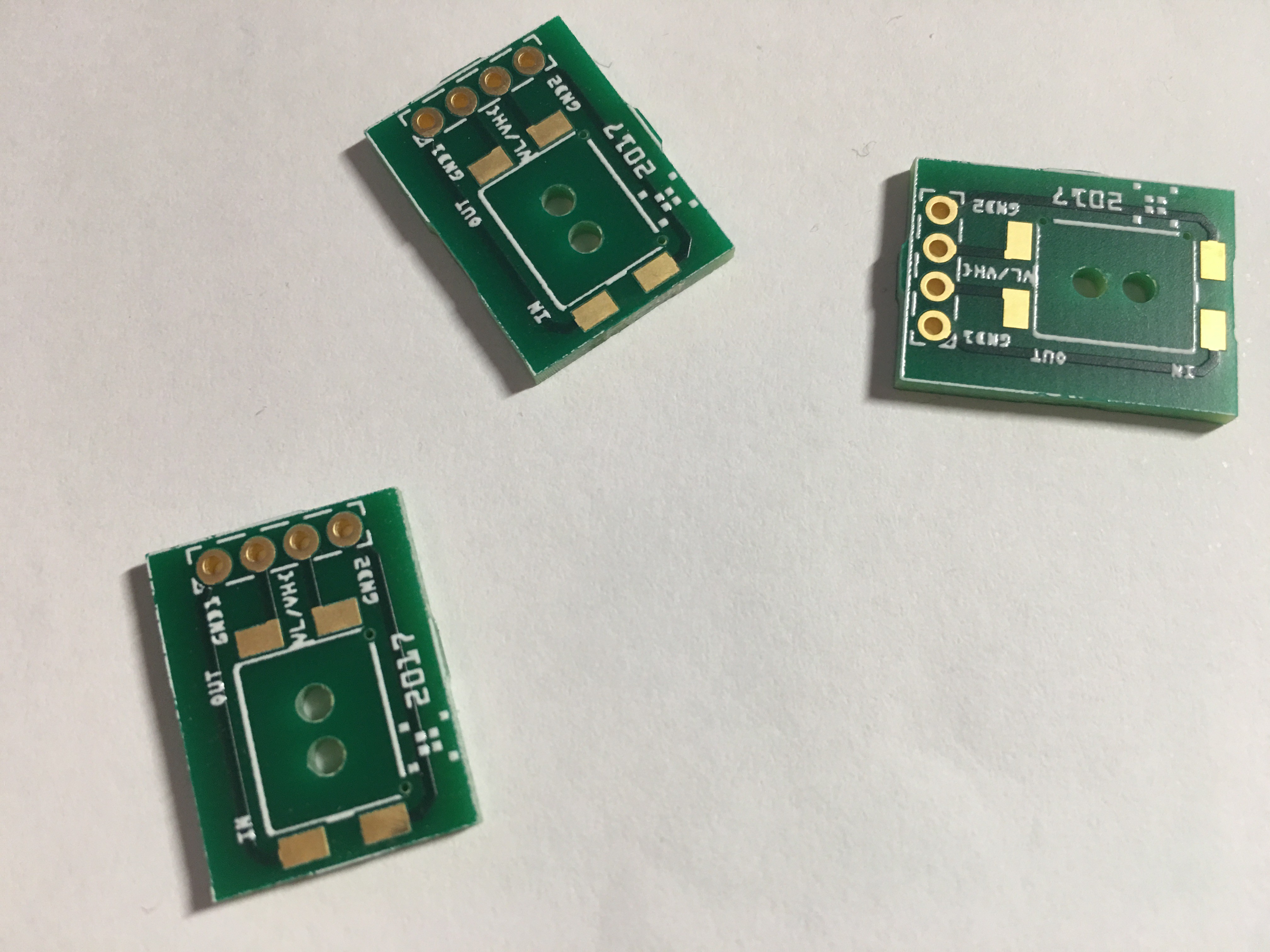 I used silicone as a sealant between the PCB top layer and the pump bottom layer... 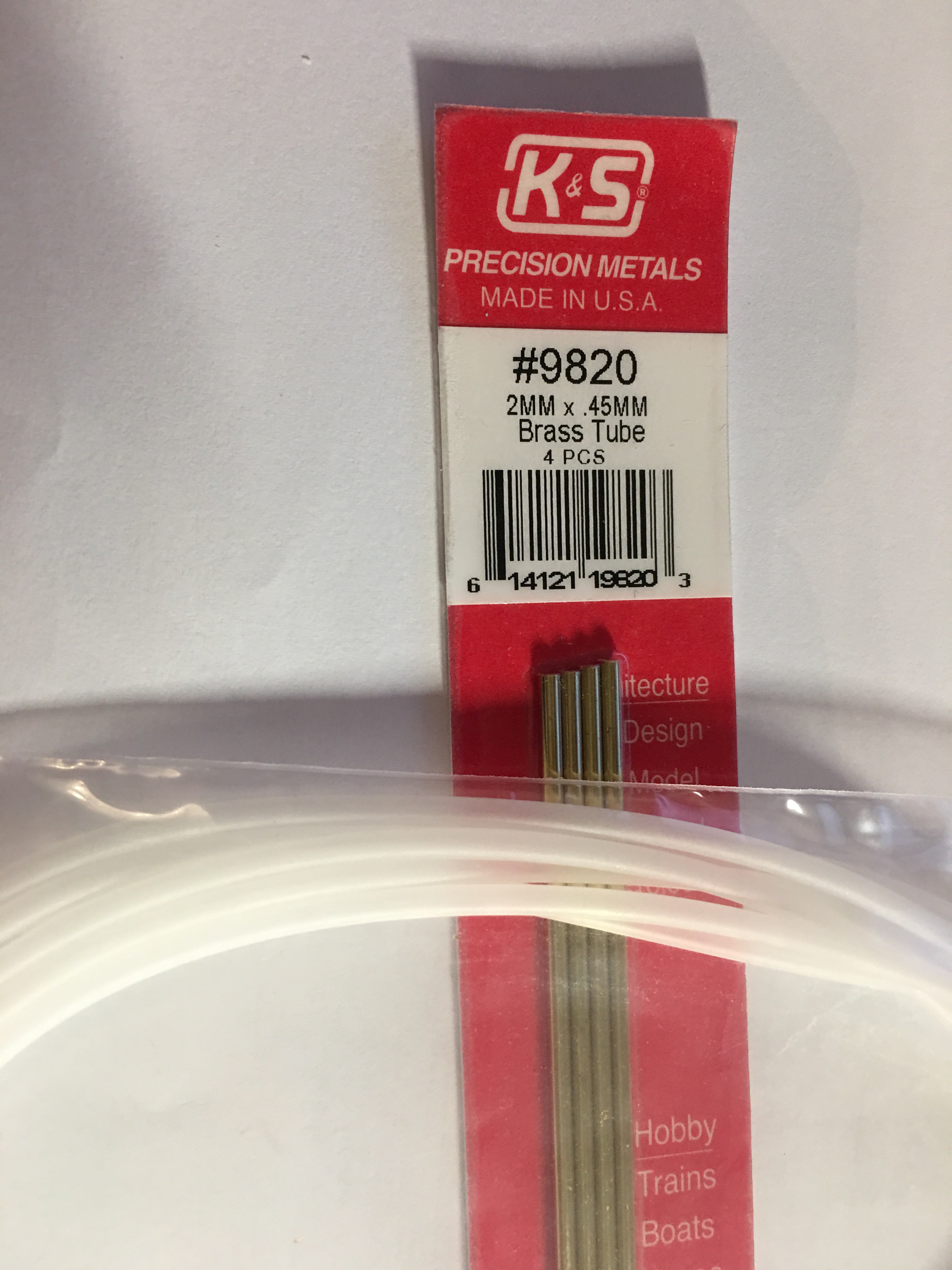 I glued two short pieces of the brass tube with 2 component epoxy resin into the inlet and outlet drill holes of the PCB and attached silicone hoses. 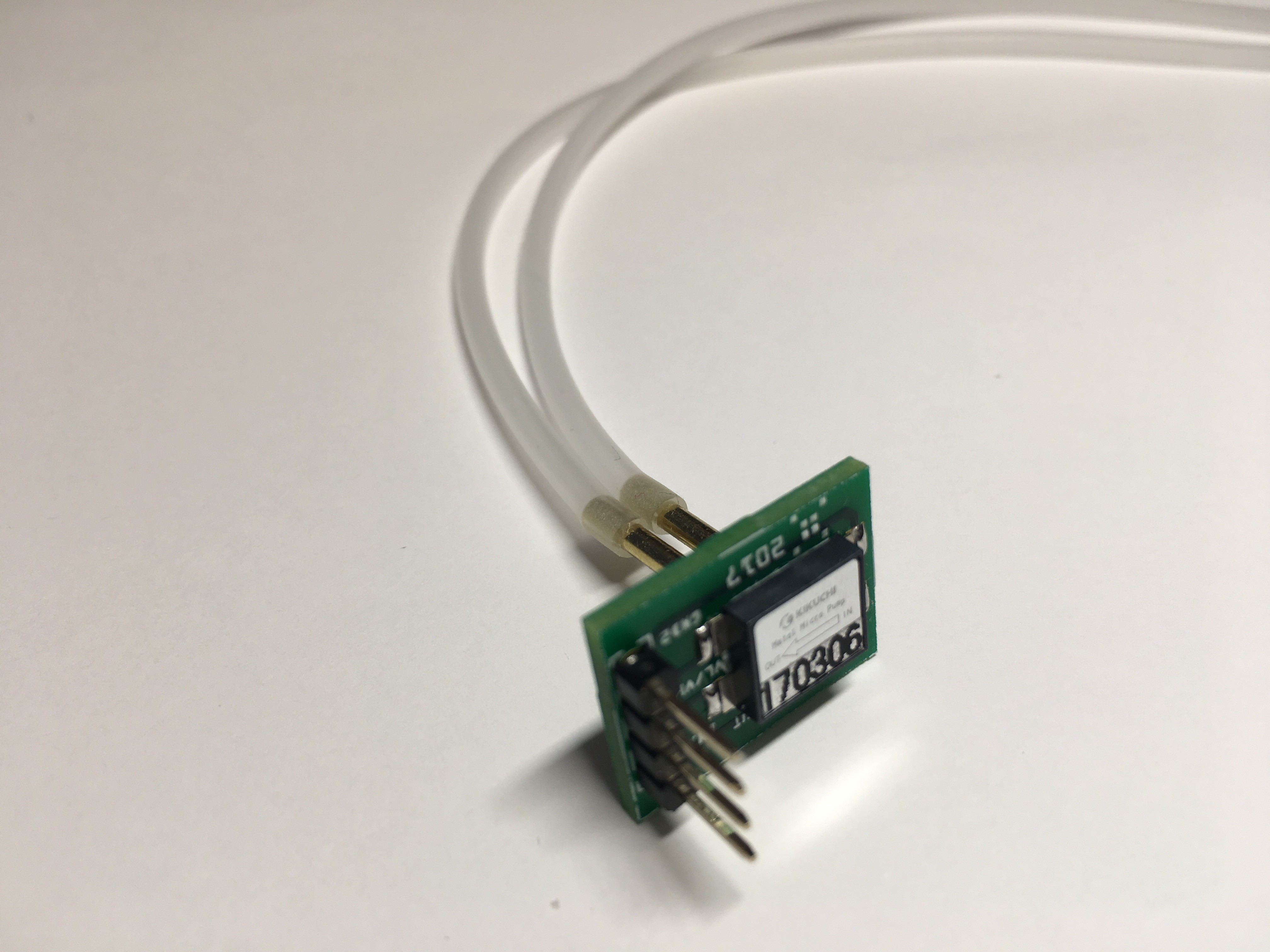 I used the DRV2667 Arduino library for the test.

You are doing a wonderful job here I am also working on a philips epilator blog you can see here its also a very new ide.

Awesome Project and am eager to see your results. Have you considered a flushing component to the TDS (Transdermal delivery system) in between doses to make sure that any residue from previous treatments dont potentiate the exact measurement of the medication in question?  I would think that continued application in the same area is going to lead to local irritation of the dermis as well as local tolerance of the skin over time increasing. DMSO since its an organic sulphur is going to cause irritation with repeated applications.

Keep up the awesome work!

Let me firstly get the pump to run. Rest is fun ;)

Probably better off not having the exposed temperature sensor to protect it from sweat/mechanical damages.  Just make a copper fill area on the skin side of the PCB that is going to make contact and use multiple vias for conduction to the temperature on the top side.

Thanks for the tip!

nice idea! Another application could be anxiety detection and abatement.

Yes, many ideas. From cosmetics to pain treatment of cancer patients. Thanks!

Hello Markus, long time no see :) I'm glad to see such a great project like this, and you tried it on yourself...UR the man!

Have been busy with other projects, but now I am back :)

Well, I'm happy you are and am excited to actually examine the actual circuit design :)

The plan is to have it as a legal medical device. I think the reuse is limited to a single person, depending on the used medicine.

Thanks for your interest!

Is this intended purely for personal use or are you aiming to eventually have it as a legal medical device? Will it be reusable, limited reuse to a single person or single use? I like the concept and I look forward to updates.

I am building a desktop-scale mini hydroponic system with almost completely 3D printed parts and an Attiny10 controller board.
Project Owner Contributor