Ancient meets modern - bagpipes have been around for thousands of years but never will you have seen or heard an instrument such as this!

This project started back in 1996 when I hacked an Irish Uilleann bagpipe chanter by replacing the cane reed with a homemade reed made from carbon steel. I desperately wanted to play the pipes in a rock band and I knew that I would only be able to sonically compete with an electric guitar by fitting an electromagnetic pickup next to a steel reed.

The really innovative part of this project is the steel reed and electromagnetic pickup system as shown below: 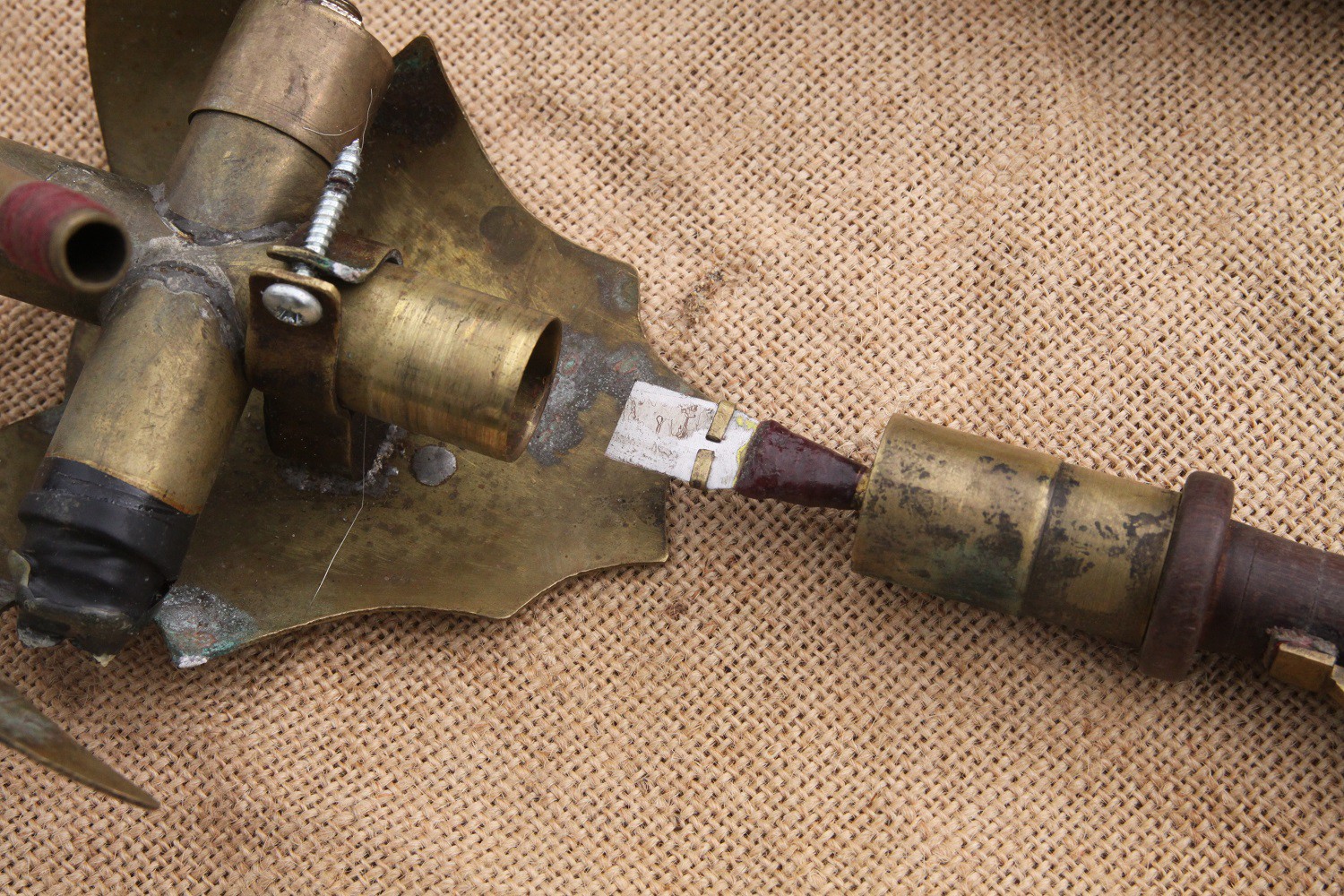 Inside the brass tubing, at the top, is a 1/4" jack socket which can connect to effects pedals and an amplifier. Opposite to that is the actual pickup which is mounted within the lower brass tube. The 'reeds' themselves are incredibly difficult to make and it often takes 5 hours to make each one with a failure rate of about 75% - so that gives an actual manufacture time of 20 hours for each reed!

The big question might be: 'Why go to all the trouble to make a steel reed?' Answer: The problem with normal acoustic instruments such as this is that when playing on a stage in front of a full drum kit with electric guitars etc the acoustic sound cannot be amplified loud enough for the performer to hear what he is playing without wearing noise cancelling headphones or similar due to acoustic feedback coming from the stage monitors. This is because normal microphones are not uni-directional and will always pick up a lot of background sound, including the sound from the monitors. This design prevents 99% of this type of feedback and even allows the sound wave produced to be compressed and distorted.

When the steel reed vibrates it induces a corresponding electrical signal in the pick up, which is an electro-magnetic coil similar to the one's used in electric guitars. Jimi Hendrix type feedback can still be created but only by turning up the monitor amp really high and physically shoving the instrument into the speaker.

The design allows other guitar effects to be used, not only compression and distortion but also delays, digital pitch shifters, flangers and wah pedals.

The wooden parts of the instrument are made on an industrial Colchester Student lathe from rosewood and the brass keys are all hand made on a small gas operated forge. The main drawings are as below: 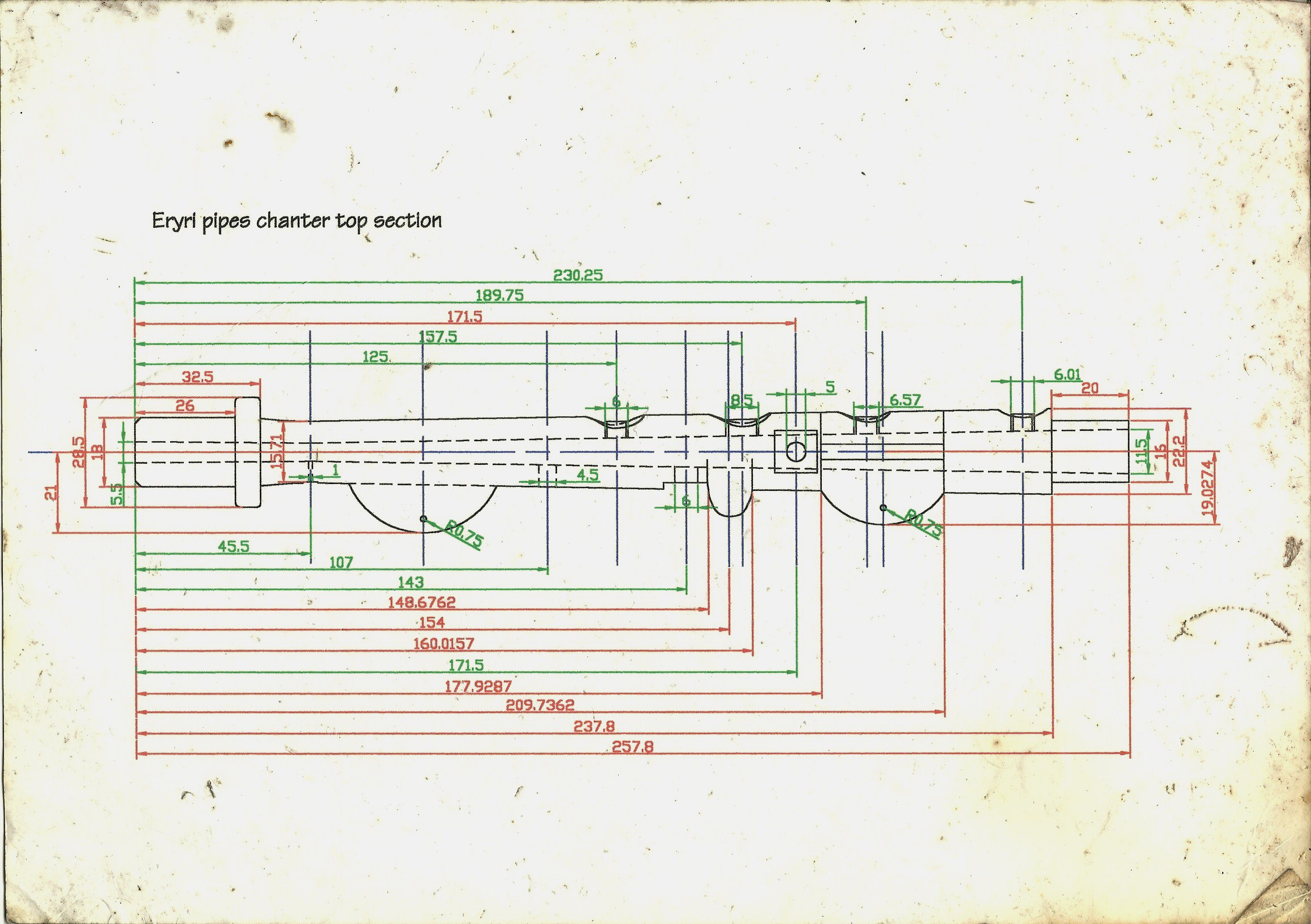 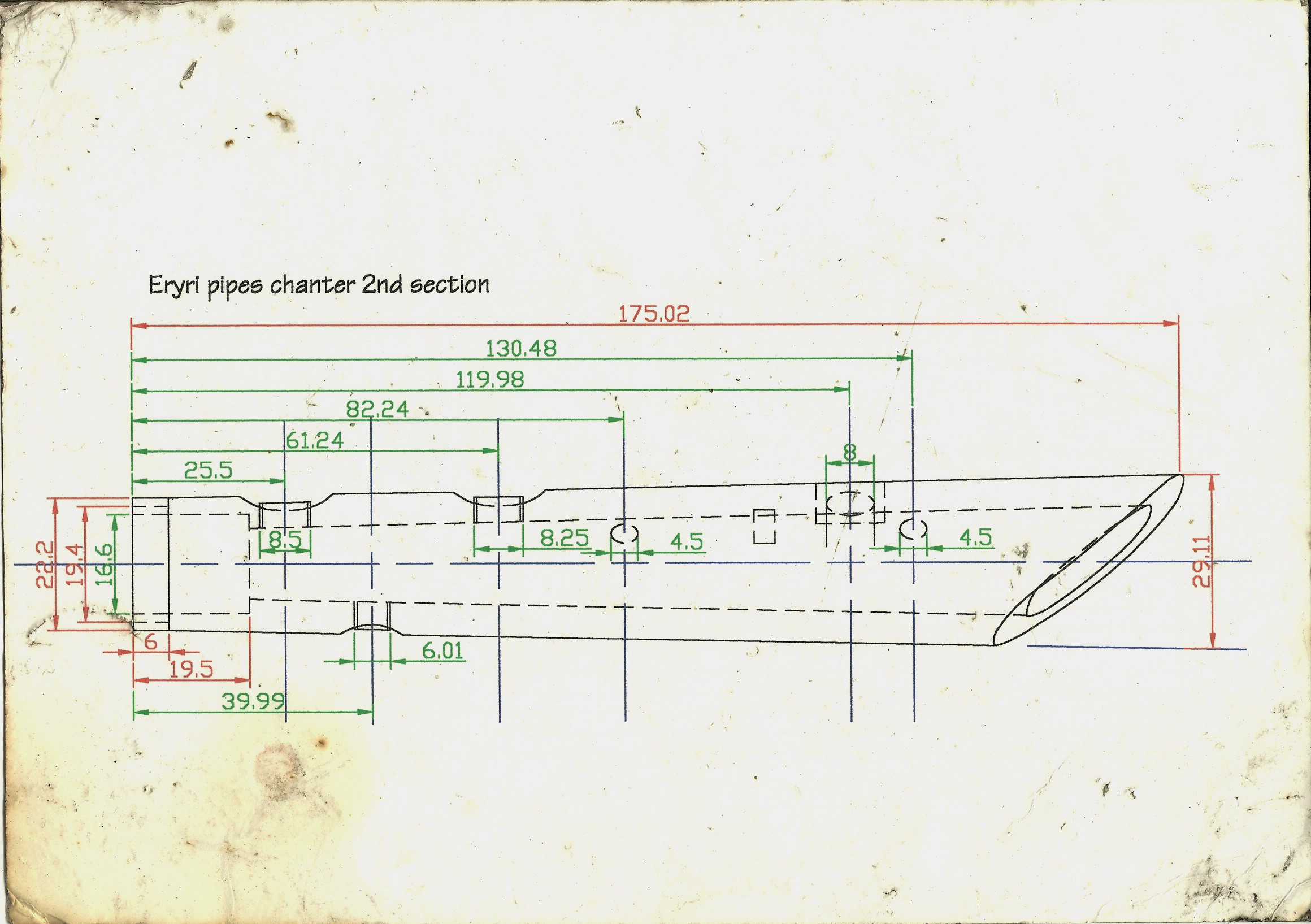 Well before the days of laser cutting, the original brass head piece was made using a hand operated mechanical engraving machine: 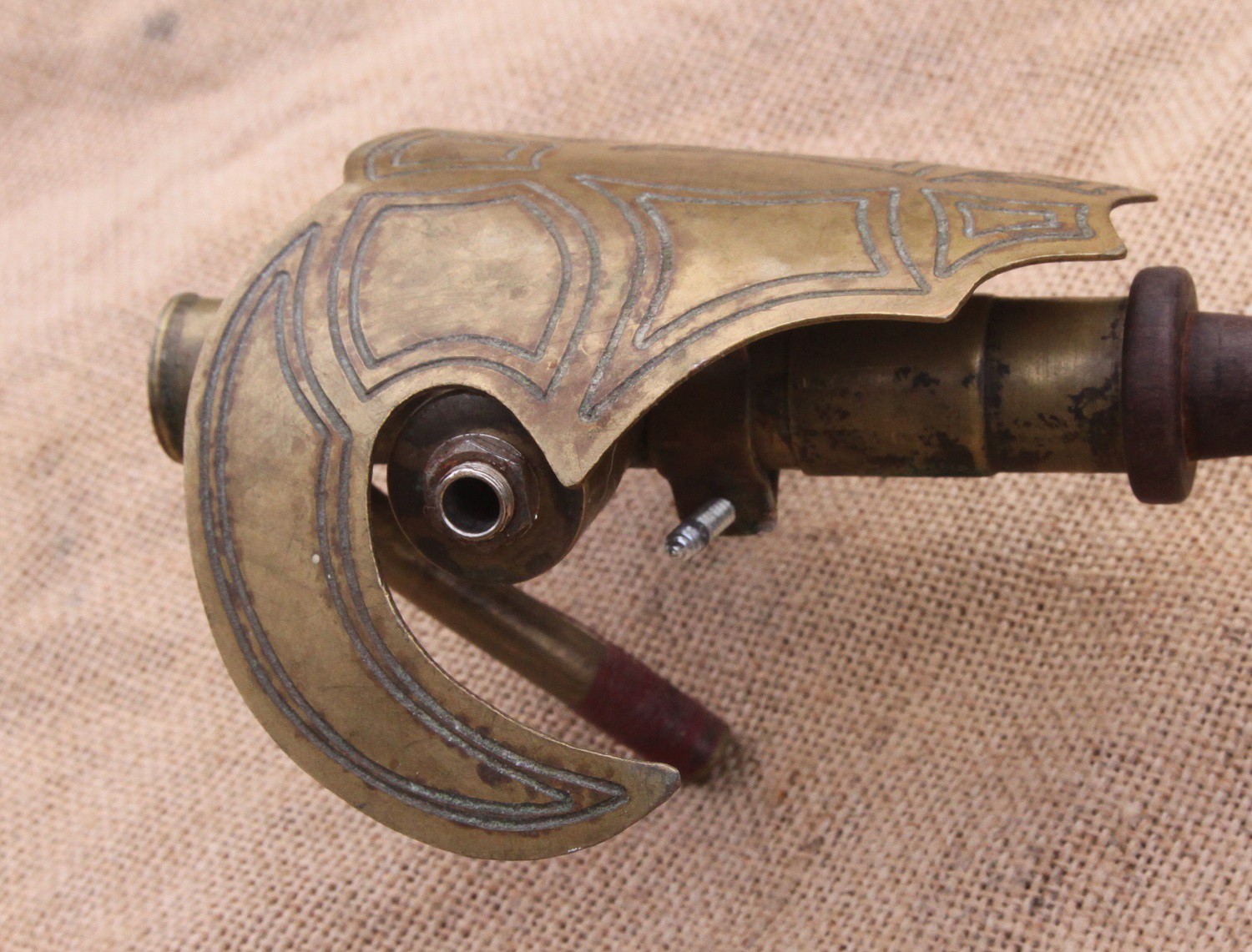 The bag itself is a genuine goat skin, professionally cured and tanned to make it durable and subtle. Inside the outer bag, which is really just cosmetic, is another bag made from vinyl - the same material used to make car seat covers! The vinyl is glued in the flat position using contact adhesive such as 'Evostick': 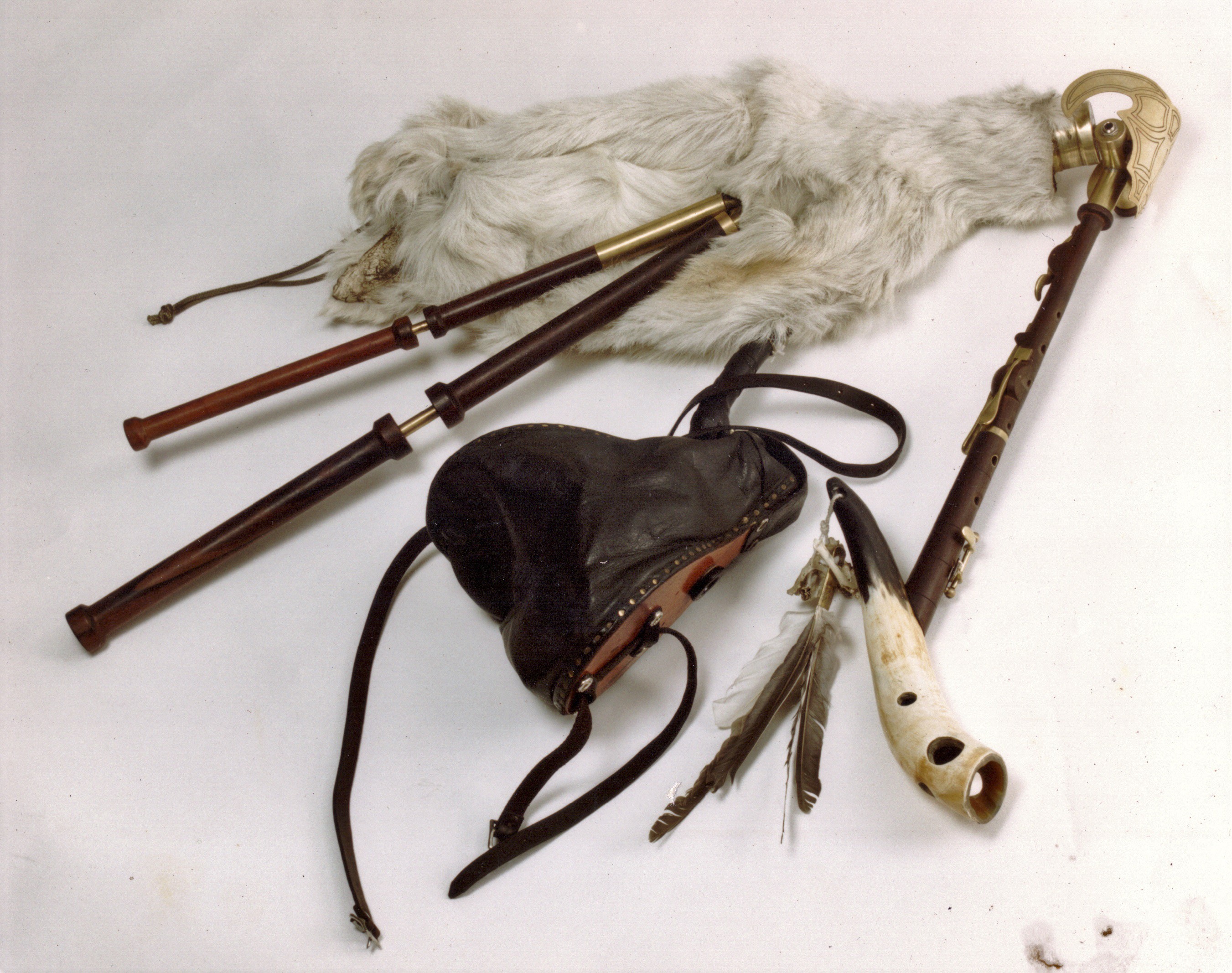 When I first put this project together I was actually extremely lucky as it worked perfectly right from the very start. Rather nervously, I plugged it into a Laney tube driven guitar amp with a friend standing nearby in case I got electrocuted. Keeping the volume fairly low, we immediately realised that it worked but the real test was would it work with the pre-amps turned up full to produce compression and distortion?

The answer was a big YES and turning the amp up it produced the most incredibly powerful sound I had ever heard! Obviously, this needs to be proved and the video below features the Eryri Bagpipes in their full glory. Playing gigs with this instrument, people would crowd around to watch and guitarists at the back would be scratching their heads thinking 'That sounds like an electric guitar, but it definitely is not an electric guitar and you definitely can't get an electric guitar to sound like that!'

Here's a video with the instrument playing in 'Standard Mode' with no guitar effects used:

The next video has the pipes in full 'Electric Mode' with a vast array of different effects used. There is no lead guitar playing in this video - just the Eryri Bagpipes. The weird sound effects at the beginning were produced by a malfunctioning Moog synthesiser:

You should take these pipes and try out for America's Got Talent, or something. I can see it going far, with the right tunes.