The STM32F103 BluePill, what's under the hoods of mbed, platformIO, Arduino,...

How to get you up and running, fast, easy and with full control ?
Evaluation of the libraries, Operating Systems, Compilers and debuggers.
I started here using PlatformIO as build tool, but then due to attraction by the mbed-os the mbed cli has taken over. It is always possible to switch to an IDE for debug.
Visual Studio Code is being used as code editor and some of its plugins presented.

If you would like to get support, give feedback or discuss new ideas related to this stm32 project ?

It's possible to directly discuss on the forum

Arduino not successfull here, and mbed get it out of the box.

new mbed Project from online to the command line

There we would see how to manage libraries, add blue pill support, fork and patch the mbed-os and solve the flash size problem by including the nano library flag

Where does my money go ? Check the build with a Map File GUI

A nice gui to easily check the content of the bin by file, module,...

Here we go through a list of Hello world examples and then stick to the PS4 Joystick used by the raspberry pi to control a servo motor. This is a preparation for the RF connection and the up to 12 PWM of the Bluepill.

Clean and easy, but in case someone stick with mbed and wants to use mbed libraries, what's the point of learning how to use a new complete environment ?

Two twin BluePills are shown below for a power measure where each has a 22 Ohm resistor in series and fed with 6V for an expected drop of around 1V. 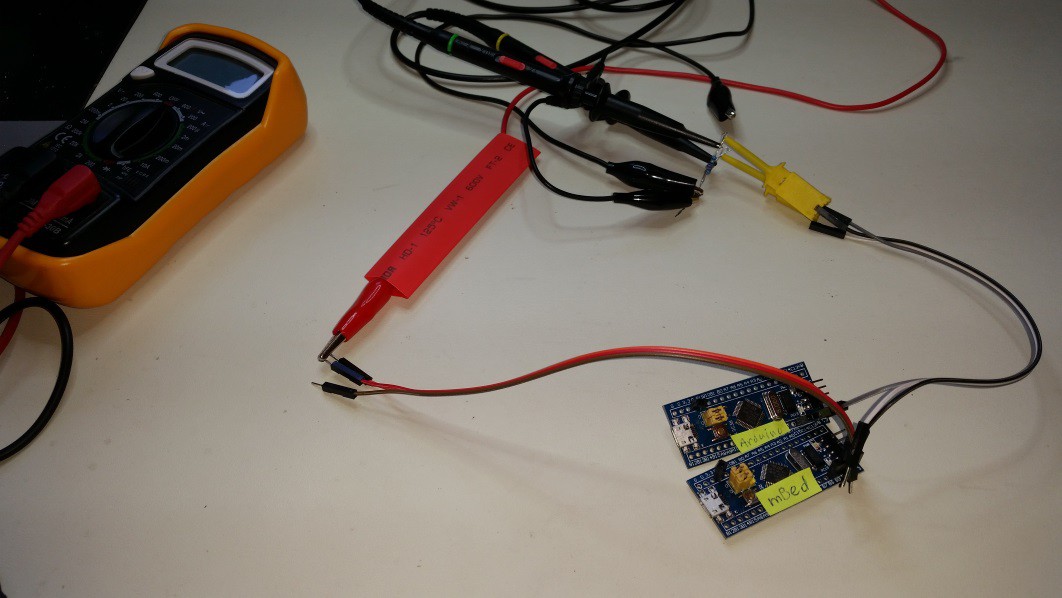 After failing to use these libraries that are obviously compatible with the chip but platformIO still does not know that, I realised that adding a custom device or board require full understanding of this new yet another scons based build toolchain.

It is non sense to compare an OS running system to a bare metal one, this is nevertheless what you get out of the box, so nice to note that the mBed is smarter (lower power on delays) and in this case the Arduino simpler with faster startup. The OS size overhead is also of course significant, so I'm not sure if it's easy to use mBed libraries without the OS to reduce the footprint.

This is the second part (Embedded System) of the FPGA tutorial that guides you step by step from basics to implementation.
Project Owner Contributor

Given Windows with some version of Arduino installed, set the paths to allow using avr-gcc/etc from the command line.
Project Owner Contributor

I love to program programmers. Yo dawg...
Project Owner Contributor

The 2016 Hackaday Prize
A cheap function generator for my lab that can do sine, square, and triangle waves and be automated using serial commands
Project Owner Contributor