A helmet with custom LED visuals

This helmet is sort of an ongoing project. I've repainted and modified the helmet multiple times now, and it's had some issues.

I ordered the helmet from eBay, and got it as a raw resin cast, with a black tinted visor. 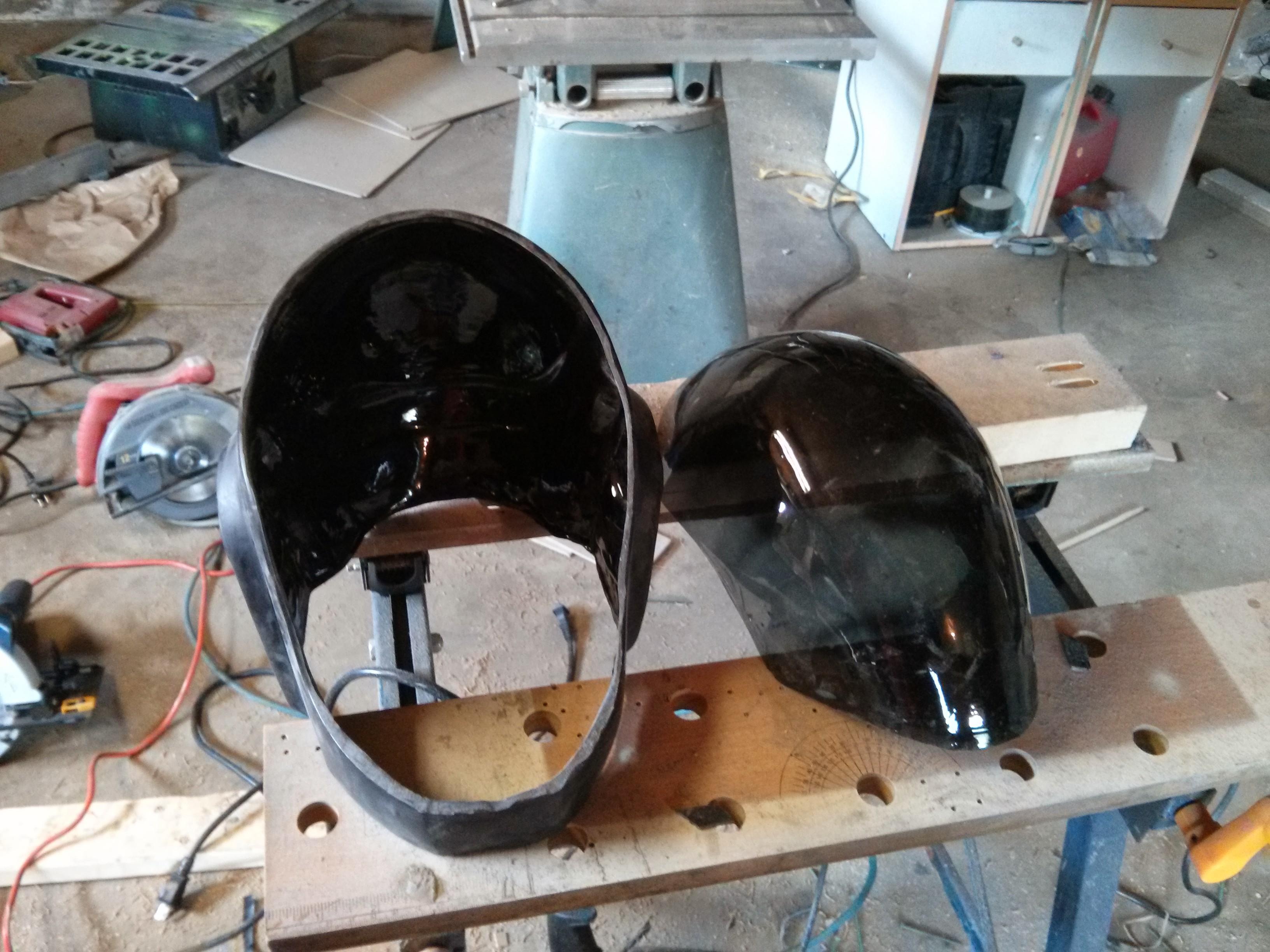 I had to cut out the visor area with a Dremel. I had been worried about the visor not fitting, but it turned out okay. The resin cast was not the best - there are a number of defects in it, with some parts being all wobbly.

Here's the first paint job. At this point, I was planning on doing the version from Tron Legacy, in Silver and grey.

As you can see, it looks pretty slick. I was planning to modify the jacket you see there, but my attempts at finding a perforated vinyl to make panels on the jacket came to naught.

I also experimented with using some EL tape to add lighting inside, just to see what it looked like. However, notice how foggy and miscolored the light looks. Turns out the visor was badly tinted, and large swathes of solid color looked terrible.

So I decided to repaint the helmet gold, and make a custom set of LEDs for it. I started with a semi-flexible LED matrix, run by a controller board from Adafruit - which I ended up having to modify the AdaFruit_GFX library, to add drawing support. wee! The matrix was made on plastic cross-stitch canvas - the holes are the perfect distance apart for 5mm LEDs. Below is the view from inside - surprisingly I could see fairly well!

Here's a few videos, from initial testing to the final code.

The rings were being used as a small substitute for the long strings in the following videos.

This was great, and I used the helmet as it was now in my Mass Effect armor for halloween. The electronics were big and bulky, and were stored in a backpack on the armor.

After halloween, I got a huge, 2m strip of WS2812 LEDs, and wanted to replace the matrix display in the helmet, for the upcoming Calgary Comic Expo.

But disaster struck! I tried to clear off the bad tinting that had been done, and proceeded to completely fuzz the visor beyond any chance of seeing through it. It took a LOT of sanding, going from 400 to 3000 grit sandpaper, and a final coat of Future floor wax to get it clear enough to see - and even then it was TERRIBLE. So no LEDs. I reclaimed all the LEDs and used them in other projects. I managed to use it for the Expo, but went with v1 of my LED tie, as seen here: 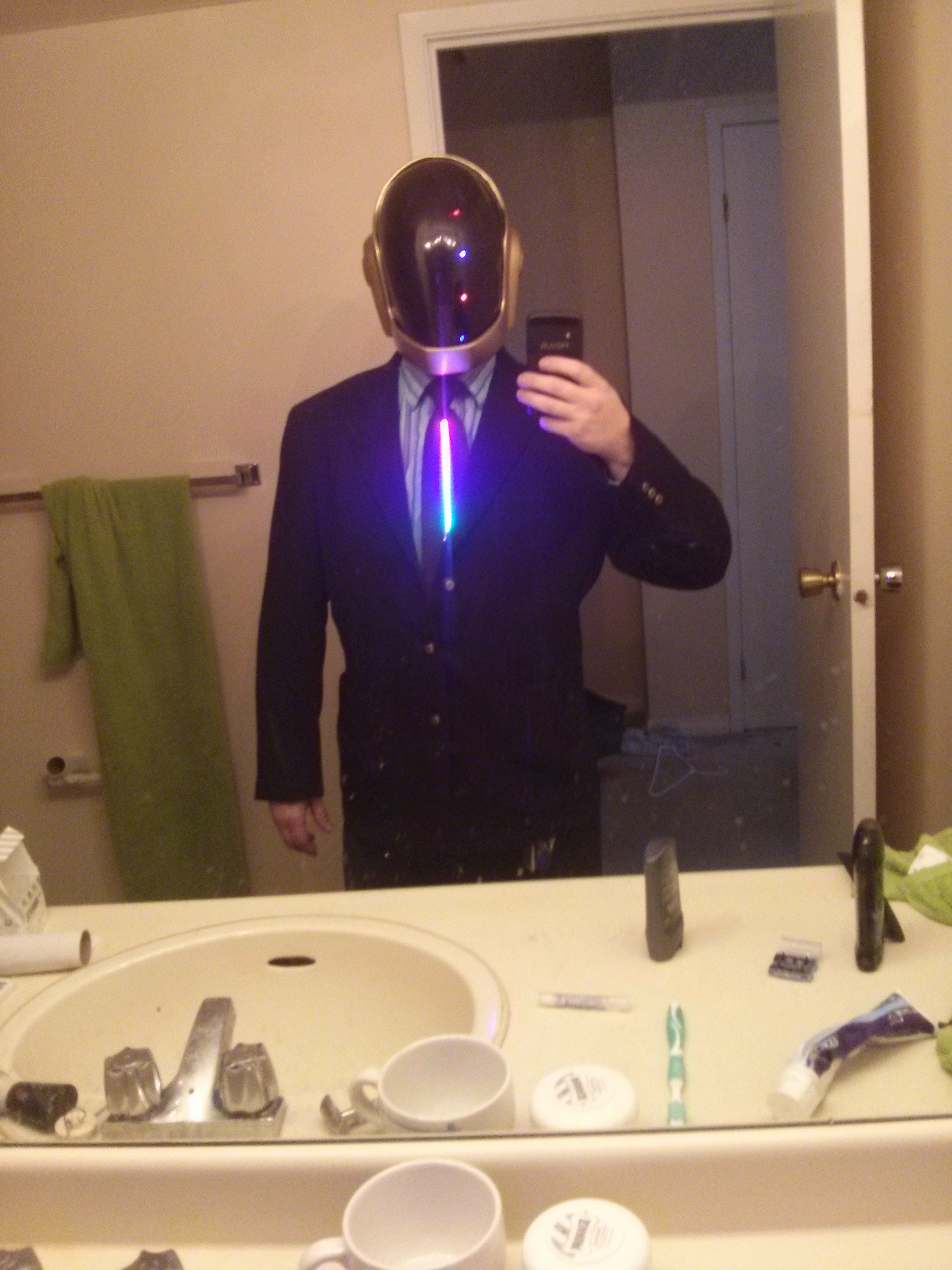 At the current state of things, I've re-sanded the visor once again, and have painted the helmet a gloss black. I plan on adding some blue EL wire around the edges of the visor. I'll get pics up soon. Eventually, I'll be doing a new mold of the visor, once I finish a vacuforming machine.

it's all in the projects name
Project Owner Contributor

Simple CNC enclosure build to reduce noise, dust and avoid getting kicked out of my house
Project Owner Contributor

Parties end up in the kitchen, so why not give the kitchen lamp a party mode?
Project Owner Contributor