NeuroBytes v0.8 production chugs along. In addition to the actual boards, I've been making a bunch of accessories: cables, switches (we call them 'mechanoreceptors' now!), battery packs, and servo adapters. I've got around 50 boards left out of the original 210. Now, pictures! 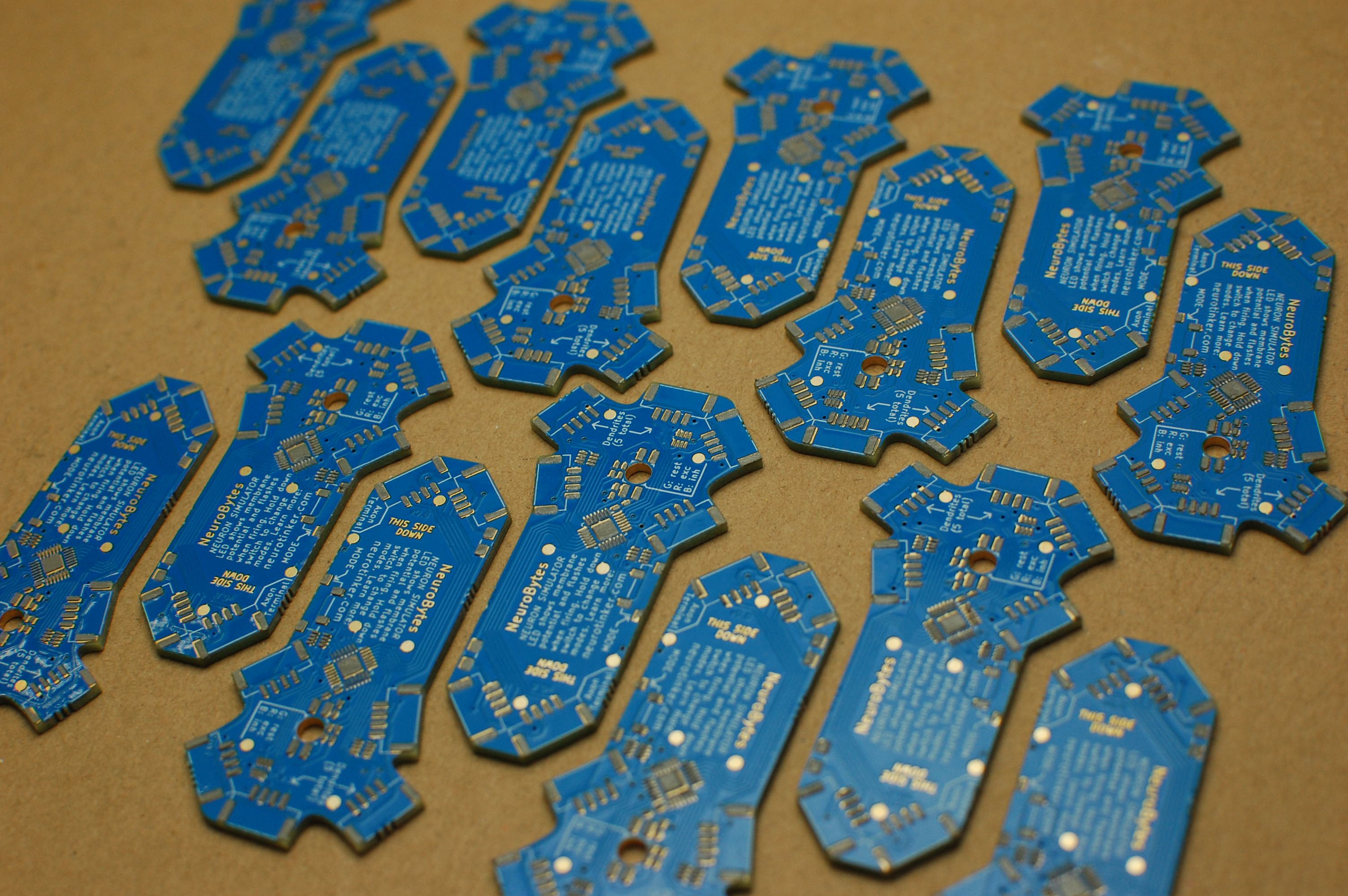 Since my stencil only covers a single board, I've been depanelizing and sanding them first and then applying solder paste. I'm using a kapton stencil from OSH Stencils; I've found a quick wipe on the back every six boards keeps the lines crisp, and thoroughly cleaning it with IPA before storage keeps solder paste from getting crusty. 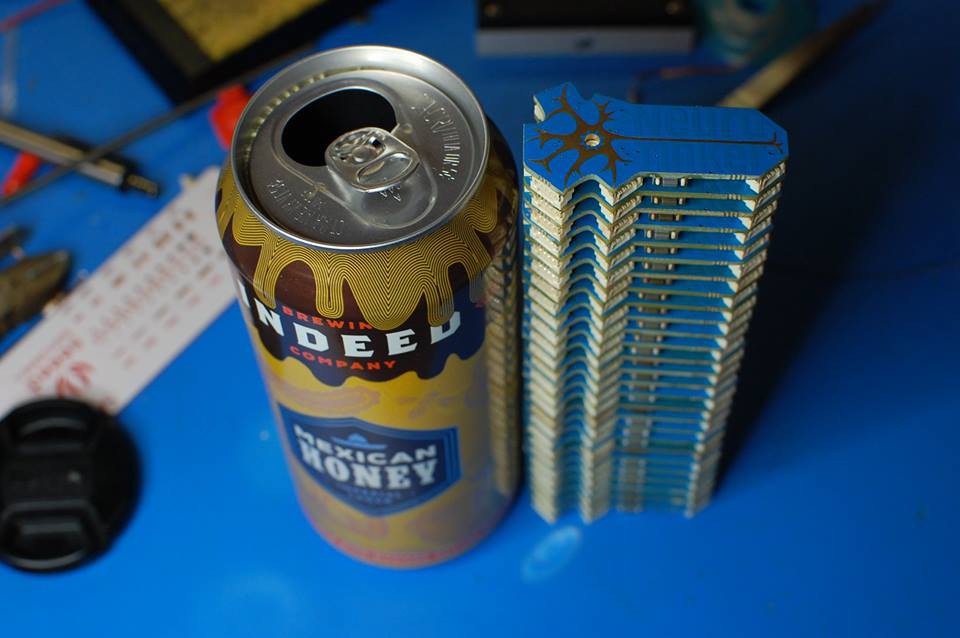 It's important to reward oneself after a successful production run. If you're near Minneapolis, I recommend Indeed Brewing's Mexican Honey. It's a bit on the strong side, but makes for an excellent post-soldering break. 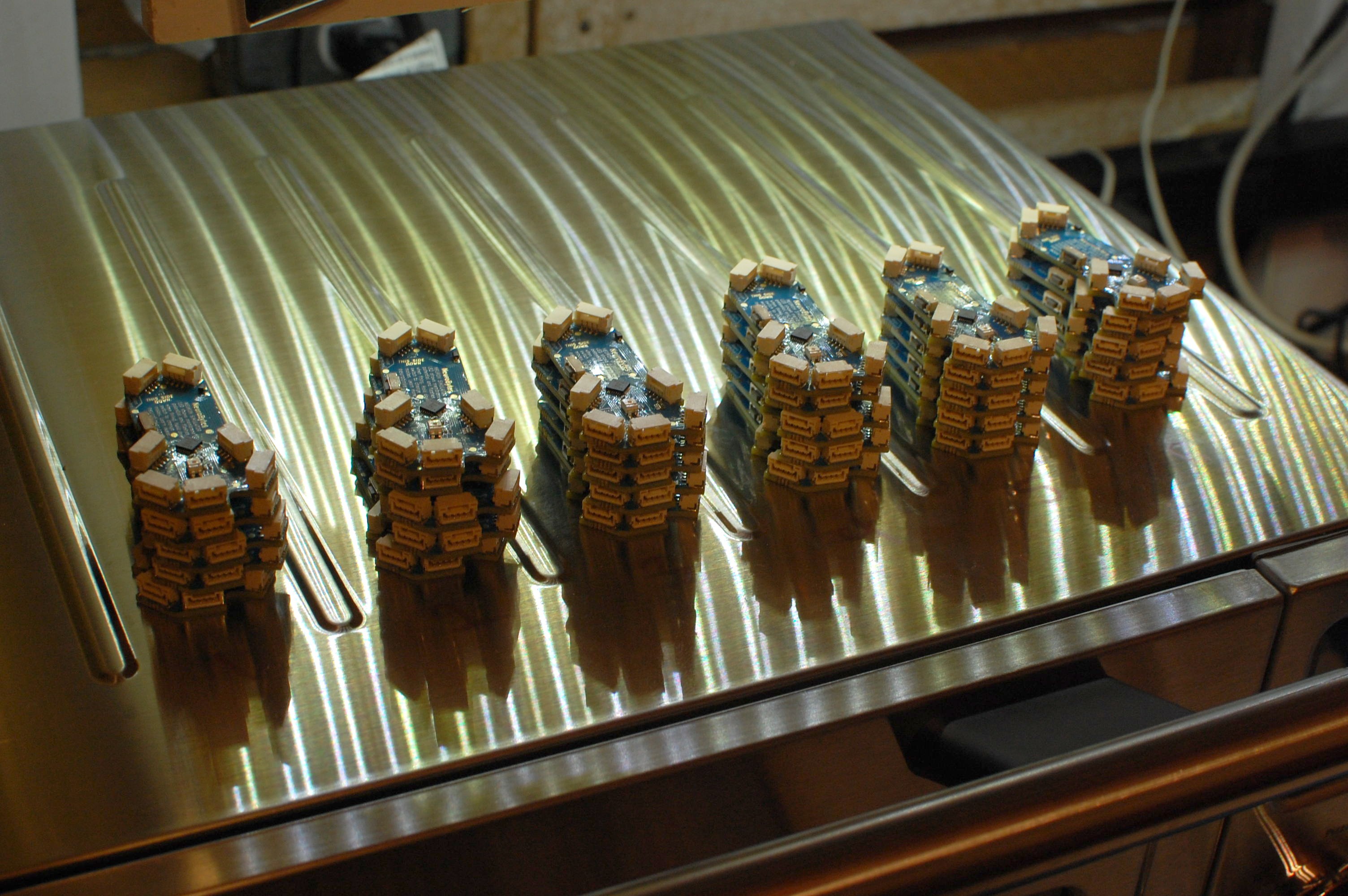 My original reflow oven, as awesome as it looked, had some hot spot issues that discolored boards and limited how many I could do at once. I bit the bullet and upgraded to a sweet convection oven (seen under the thirty new boards in this image). I also skipped the temperature controller altogether; I just set it for 205 C and hit preheat, and all boards (usually 10-20 at a time) reflow within ten seconds of each other around the four minute mark. 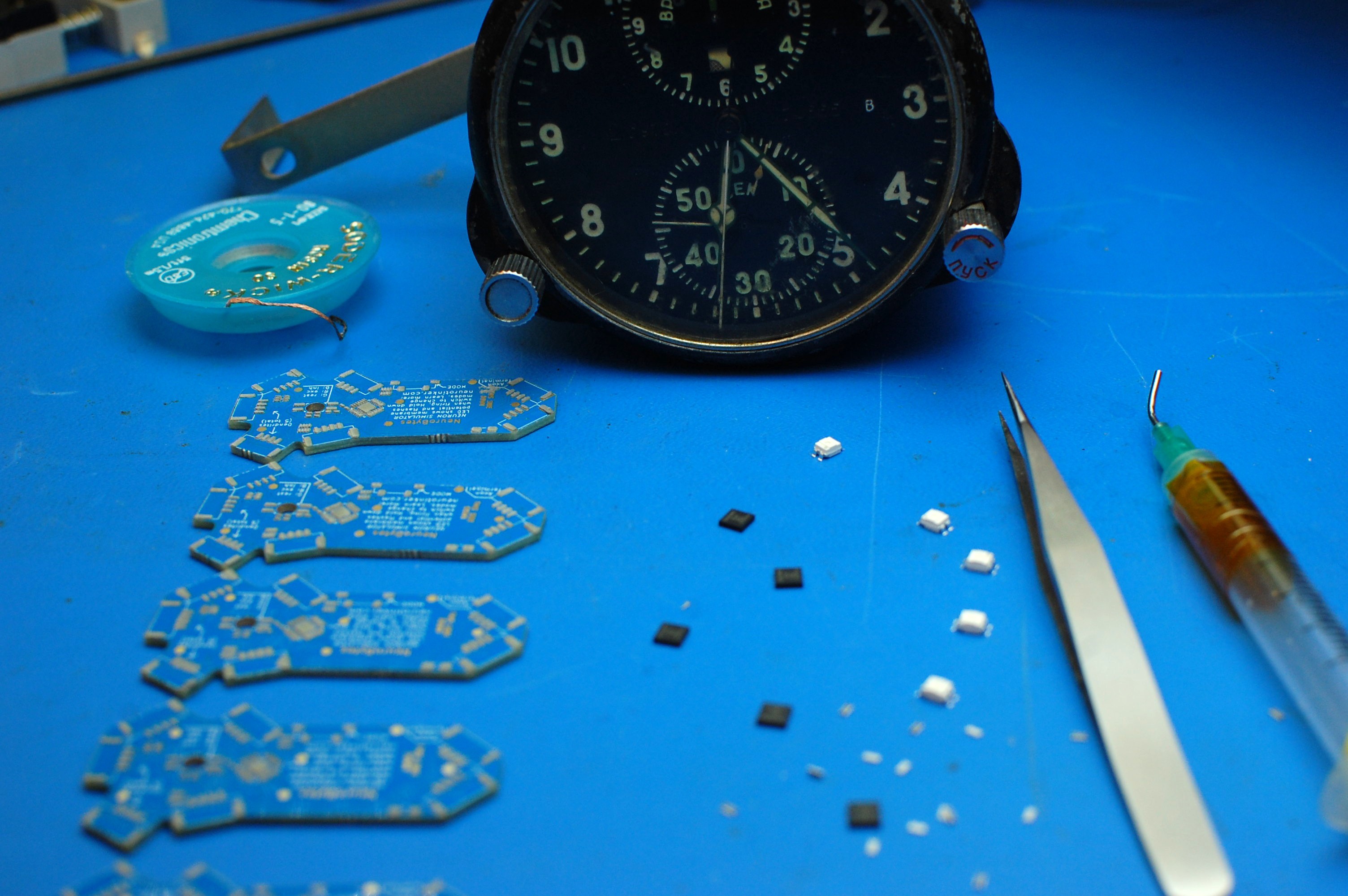 Some time ago I was given the chronograph out of a MIG 23. It's been quite handy for keeping track of rate data, something I never did with the v0.4 run. I'll go into exhaustive detail at some point, but for now just know that for the whole process--paste, place, reflow--I'm at roughly 10 boards per hour. The DIY vacuum tweezers (shown to the right of the standard tweezers) help a bit, but part placement is still a huge time suck. Cutting and stripping wires is fun. Ish. Fun-ish. I'll do a separate post on this at some point, as I've got a pretty decent system that works for short-run production. Also, I've been saving the tiny insulation cylinders because they are satisfying to look at when put in a tiny vial. 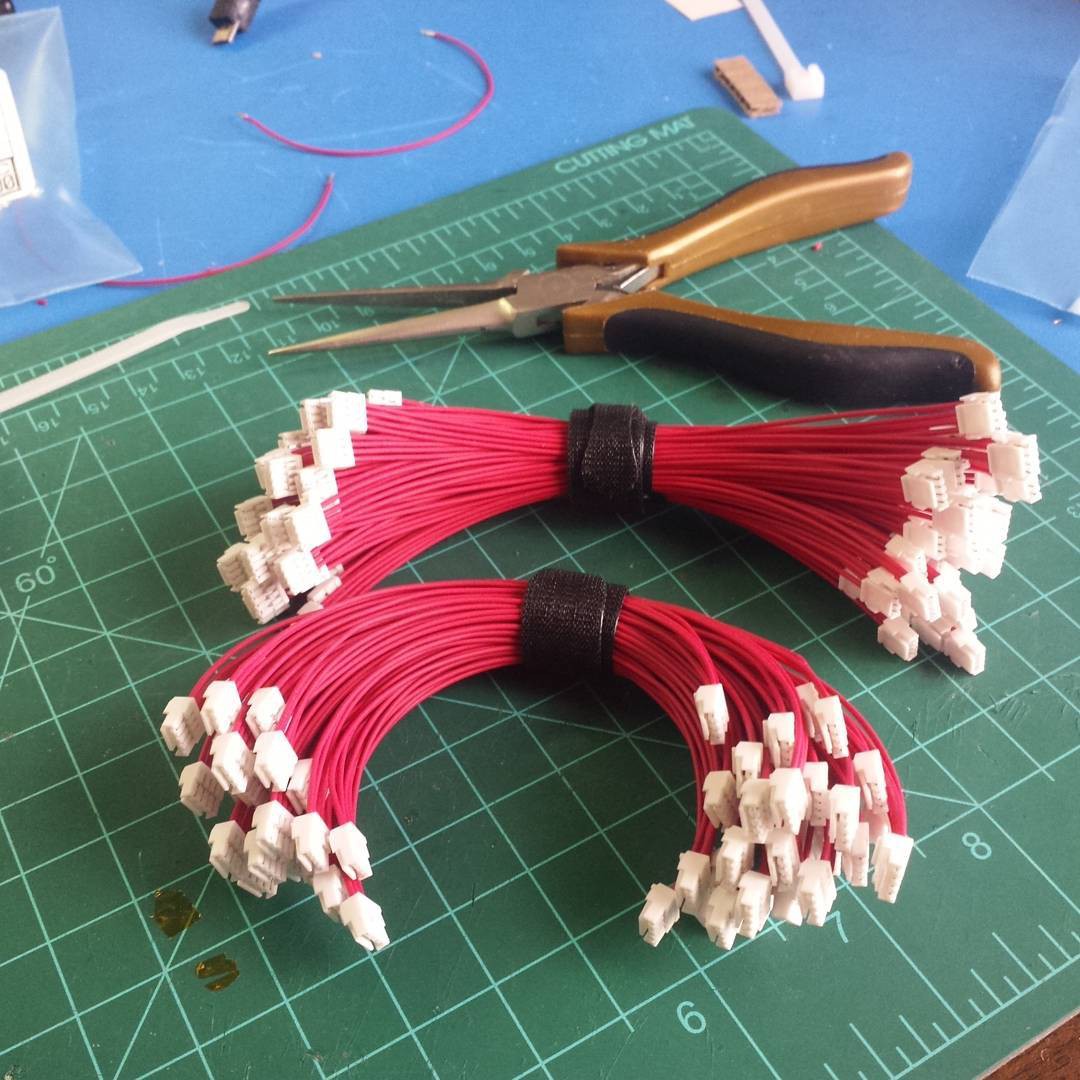 A bunch of wires. I also made stubby wires. Red ones are excitatory, while blue wires (not shown) are inhibitory. Mark + cut + strip + crimp + assemble = 19 cables/hr, give or take. Not bad. 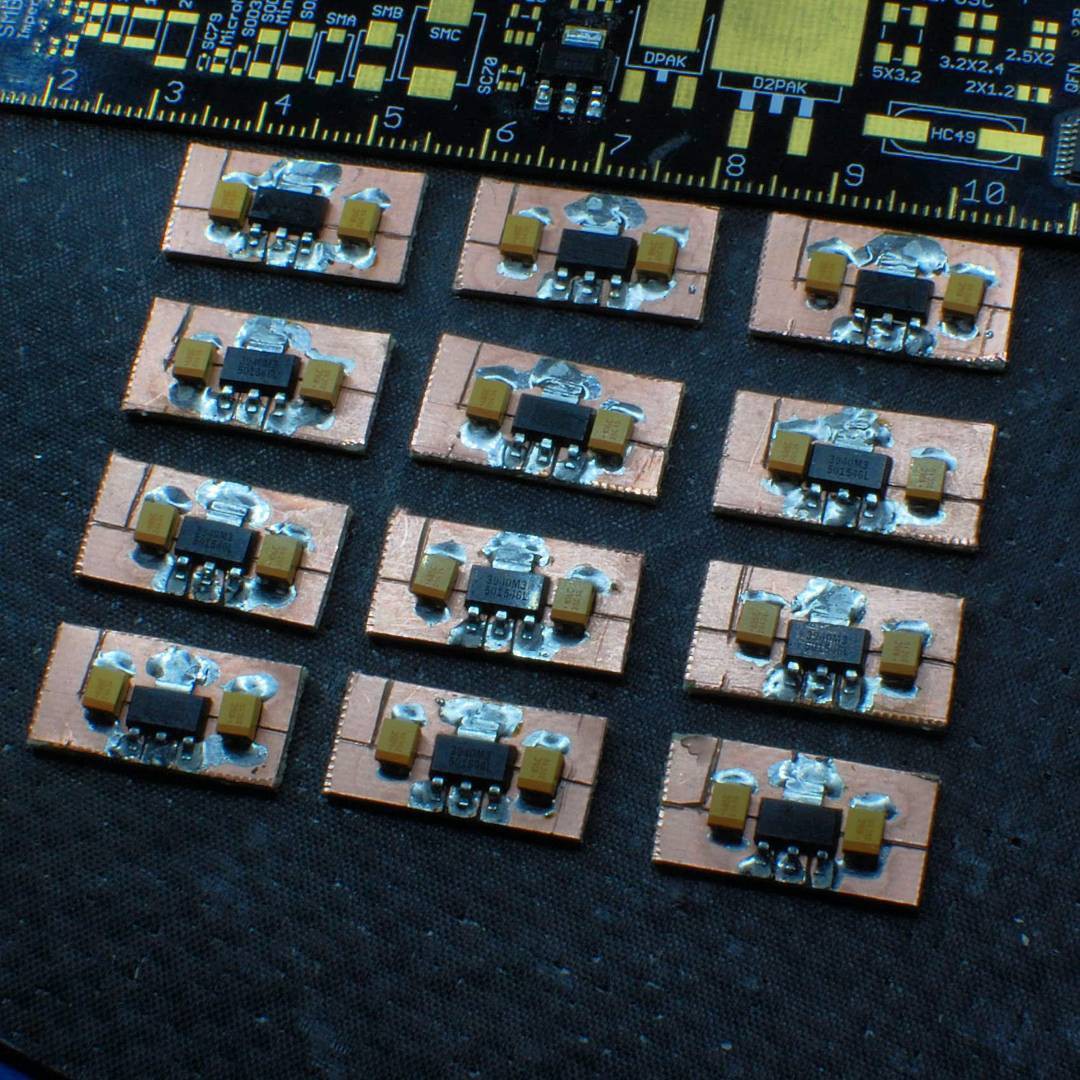 Emergency power supplies! These dumb little boards are just LDOs with the associated filter capacitors, and are sized to fit into the battery packs I found at the local surplus store. I'll do a separate post about this process at some point. Emergency, because I forgot I needed to make power supplies until a day before the UPS drop-dead date for our upcoming trials.

A few weeks ago, Joe and I headed out to DC for an NSF SBIR conference. The trip happened to coincide with the NoVA Maker Faire in Reston, VA, so we got a table and taught a ton of youngsters about action potentials and the patellar reflex: 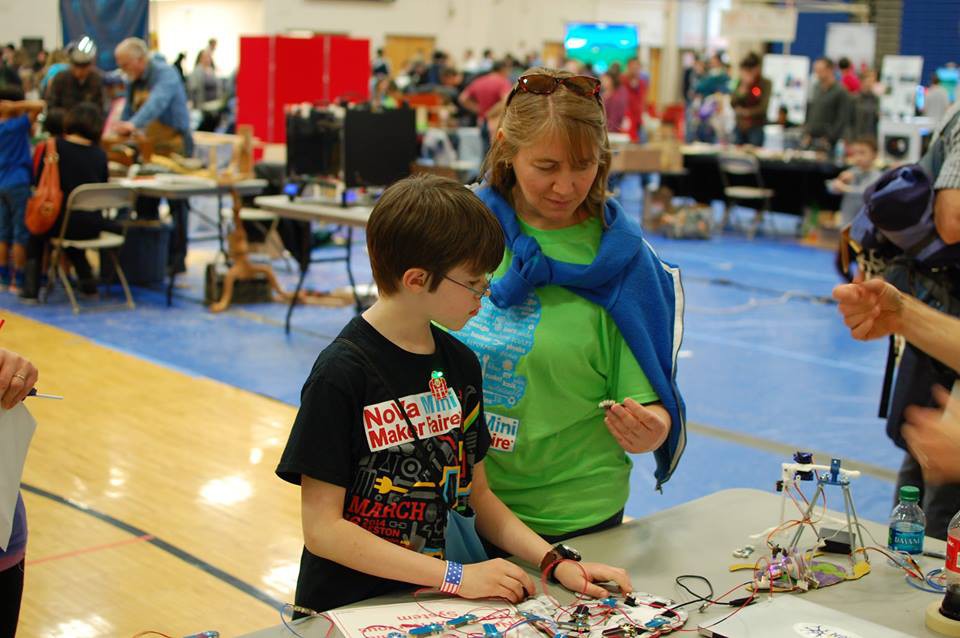 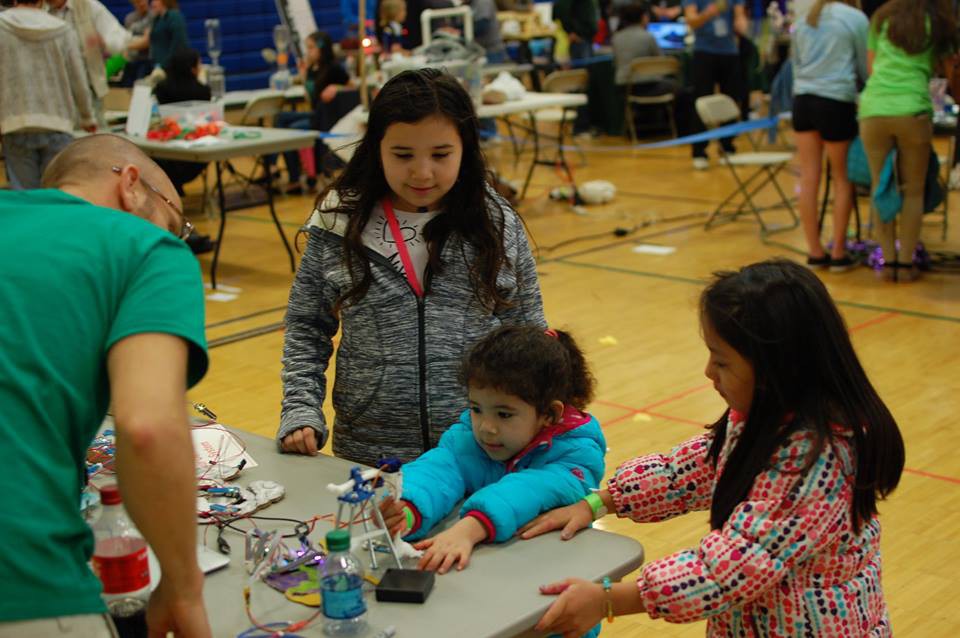 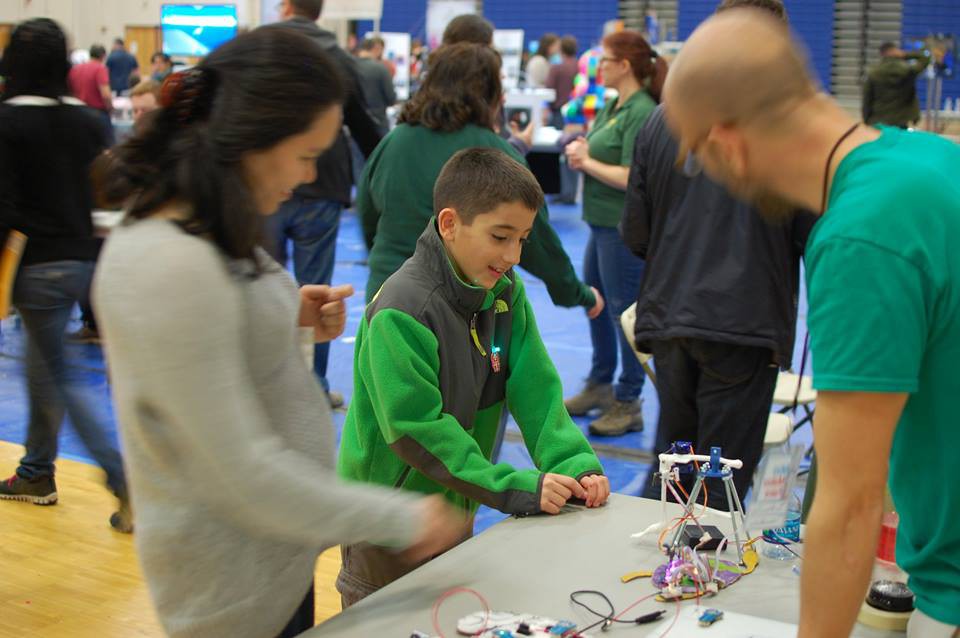 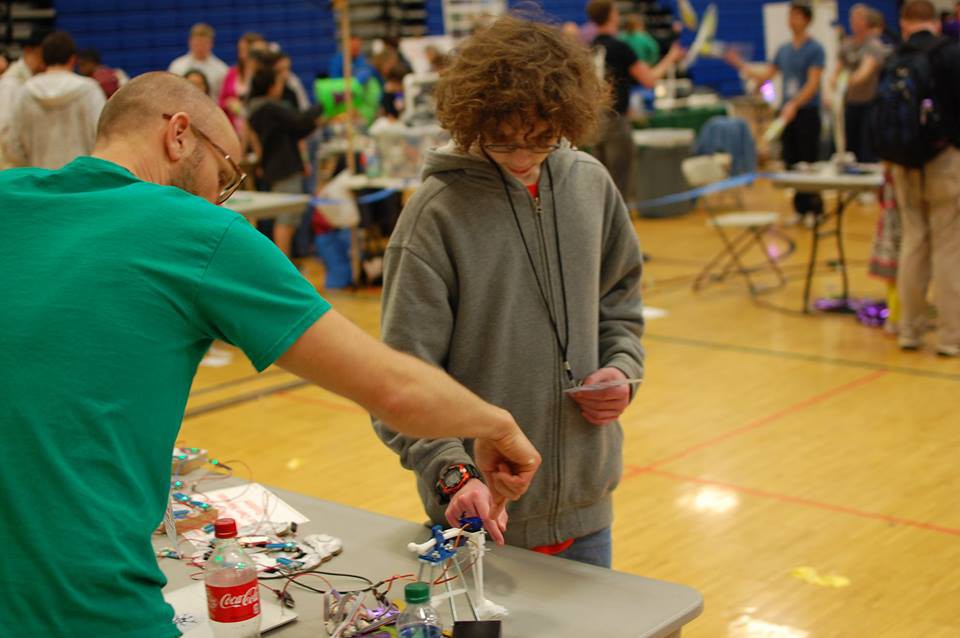 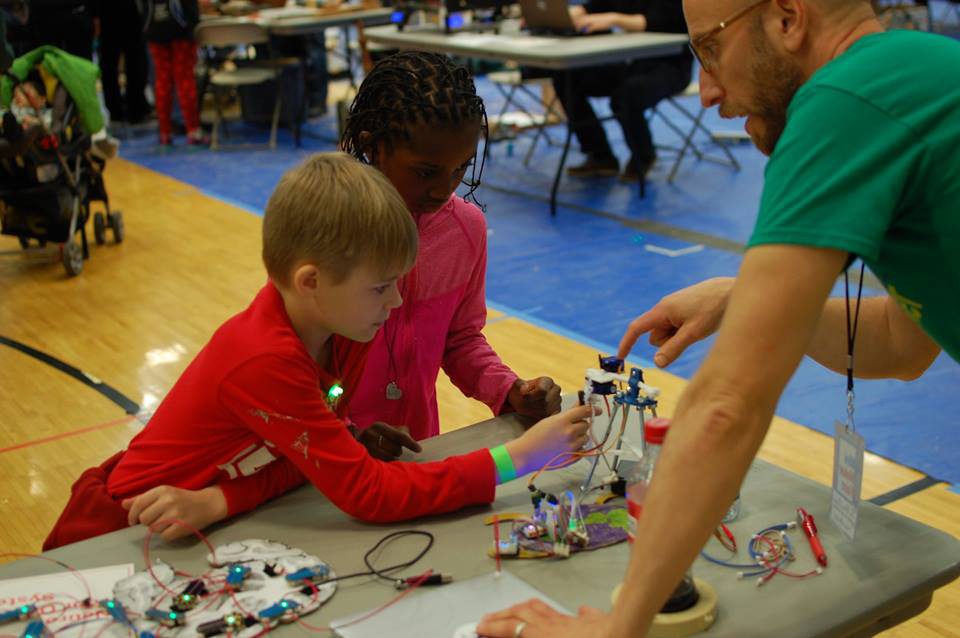 As with the San Diego event last fall, NoVA Maker Faire was an amazing event. We learned a lot about how students interact with our platform and got some great durability testing in. Also, a ton of parents that wanted to know how to buy NeuroBytes, so I suppose that is nice as well. Soon, parents!

The rubber hits the road this week and next. Earlier this month, we shipped ten patellar kits to Anj Petto at the University of Wisconsin in Milwaukee: 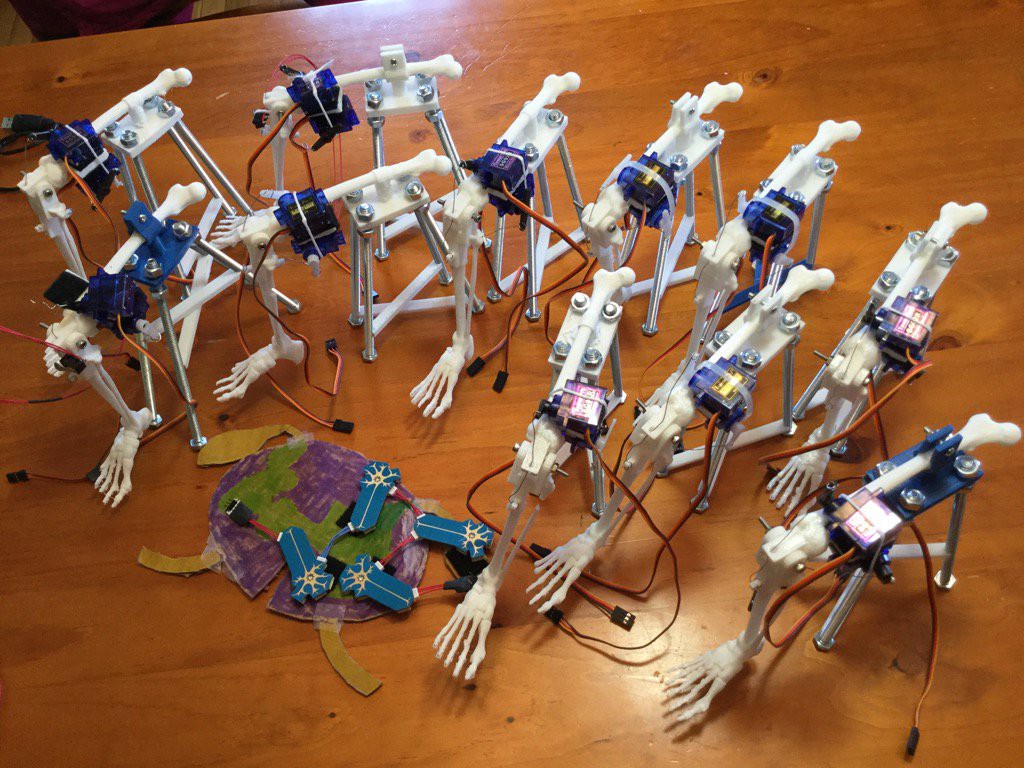 They're going to use the platform to teach the reflex arc in an introductory anatomy and physiology class; something like 200 students across ten recitations will be using the product, and we'll be collecting tons of data related to educational efficacy and more. We're also going to teach the same unit at Patrick Henry High School in Minneapolis--three class periods over three days in late April, each with roughly 20 students. This will give us a lot of good information as we lock down the design for truly scaled production.

Finally, an acknowledgement--I've slacked a bit on our commitment to be an Open Source Hardware Company. We don't have anything for sale (yet), and we've just been too busy iterating and modifying the design to get BOMs, schematics, board layouts, and code posted. No guarantees in the short run--the v0.8 design is still very much a prototype--but I do intend to formally release everything in the coming months. I'd rather do this after the design is finalized to avoid needless revisions, but I am happy to do so sooner if anyone is interested.