A television (TV) monitor is a good example of a device which needs hard-realtime control. The TV is controlled by periodic synchronization (sync) pulses. If a sync pulse is late, the TV picture quality suffers. So a late calculation is worth nothing. The Atmel AVR mcus are fast enough to generate black and white (but not color) sync and image content, as long as you obsessively pay attention to the time required for every operation. Note that the newest code is here. Small TV monitors also seem to be one of the cheapest graphics devices you can buy, include audio amplifiers and speakers, and are designed to be almost bullet-proof. A perfect student lab device.

There are several very good references for understanding how TVs are controlled by a pulse sequence. I particularly liked the Stanford EE281 Handout #7 entitled "TV paint". Also very useful were Software generated video, by Rickard Gunée, Video Tutorials by Glen A. Williamson, and various excellent projects by Alberto Riccibitti. Mark Oreglia, Professor, Department of Physics at The University of Chicago and The Enrico Fermi Institute was kind enough to allow me to post a full interlaced, NTSC sync driver.

The goal is to generate non-interlaced, black and white video, with enough image content to be interesting as a graphics device. The software described here implements an NTSC-rate, non-interlaced, video signal. For ease of teaching, I wanted as much of the code as possible to be in C, with litttle or no assembler. The current version of the code is entirely in GCC, with no assembler. There are several versions with different horizontal and vertical resolution. See the examples below. There are utilities for drawing lines, points, and text, and for reading back the screen color. The raster generation code needs to run fast to get good pixel density. Once the TV gets to the bottom line displayed (ScreenBot), there is some extra time to do computations, interact with users, or update state. All drawing must be done when TV scan lines are not actually being drawn to avoid visual artifacts. Synchronization is handled by the two ISRs. Drawing is done by writing bits (pixels) into the main screen array, while the array is not being displayed. The drawing utilities described below write to screen memory for you.

Two bits of a port are used to generate three video levels:

The circuit shown below connects the Mega644/1284 to the TV. 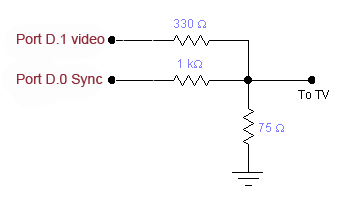 The code is sets the USART into MSIPM mode (SPI master mode) which turns off start/stop bits. The USART transmit-double-buffer makes it possible to stream pixels at a uniform rate without assembler, just by writing a fairly fast loop. With a 16 MHz crystal, the pixel rate is 4 MHz. The SYNC signal is now on pin D.0 and the video on pin D.1. There are 3 versions with formats 144x150, 160x160 or 160x200, but other values are possible. This code also uses a separate timer interrupt to put the MCU to sleep so that main does not have to. The result is that application code can run faster because frame calculations do not have to be precisely timed to fit between frames.

Nice project. Its for me an inspiration to realize Duck Hunt for the Uzebox game console (also with ATMEGA644)....

Now, could we use 3 of these devices working in tandem, driven my a master controller, to feed out all 3 RGB channels?

IF you used one clock source for all of the cpus, I think so.

What classic fun!  This brings me back to THE DAY!

Eric Evenchick wrote 03/09/2014 at 23:53 • point
I had no idea that NTSC could be generated using just two pins and a simple resistor DAC. Now I'm trying to think of what fun projects are possible with super cheap video devices...

A VGA driver on the FPGA side of the SoC connects to the ARM side. 8-bit pixels were used to conserve memory on the FPGA
Project Owner Contributor