Gas sensor "grenade" that may save lives instead of taking them. The sensor can be thrown into dangerous areas to remotely report levels

In my professional life I have used many different gas analyzers for confined space entry as well as emergency response. These units are very expensive and require the user to be able to read the display or be close enough to hear the alert generated if an unsafe condition exists where human entry would need other measures.

I made this to be a very cheap and easily reproduced product which can simply be thrown into any uncertain environment such as a confined space, building with a possible gas leak, fire etc. Any potential entry person can just toss the ball into the area and remotely receive the gas and smoke levels via voice from several hundred meters away.

I used an MQ2 smoke, LPG (Liquified Petroleum Gas), and CO (Carbon Monoxide) sensor. I used freely available code to get the sensor working with an Arduino Nano. Then taking an Ultra Cheap 433MHZ transmitter to output real voice transmit to any basic radio within the area.

This project is fully open-source! Enjoy

This project is not only for emergency workers- Every day thousands of people work in industries which expose them to the hazards of "confined space". The difference between life and death in these areas can be as simple as as a few PPM deviation from standard atmosphere. This project is dedicated and given freely to all of them...

Using the Arduino I was able to easily measure the gas levels. Using the Talkie library I was able to then translate these values into true synthesized human voice (with NO special boards/modules) The transmitter accepts the voice output and directly transmits it out on 433mhz to ANY receiver. It is sending this as an AM transmission- but surprisingly any FM receiver such as scanners/handy talkie radio, EMS radios etc have no trouble receiving the clear voice values.

Then entire package fits nicely into the "ball" form-factor. This enables anyone to throw it a significant distance into a potentially harmful area. No additional equipment required and the best part: Here is a more technical demo:

Updated videos and code walk-through can be found in the links. Further info can also be found in the GitHub repo which includes all the code, design files, PCB layout and design document. 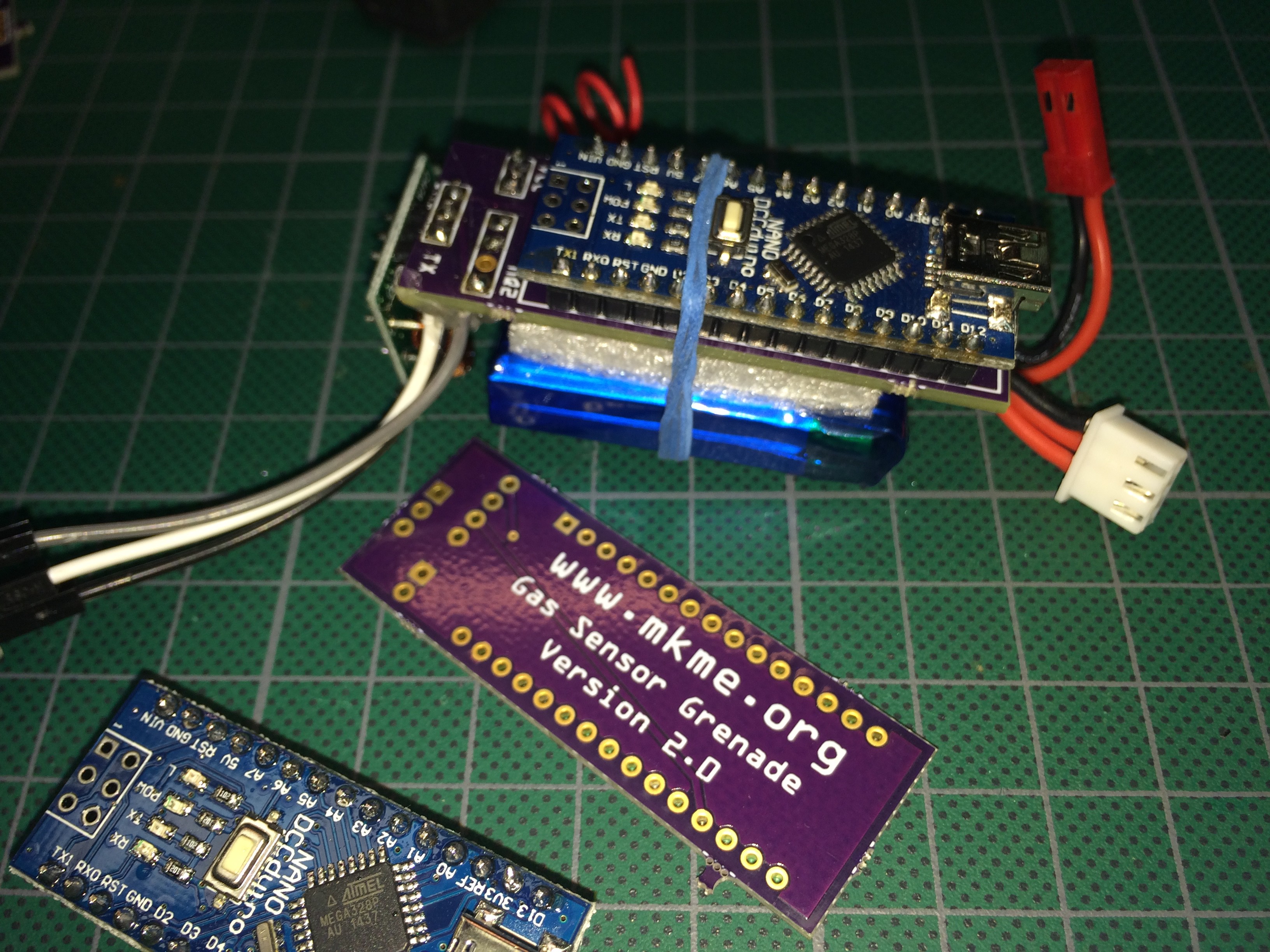 Here is a demo I did on the Adafruit Show and Tell show. Fast forward to 09:46 as the direct link doesn't seem to work here:

Video covering the basics and full Arduino code walk-through/explanation so anyone can mod the project to suit their needs:

I decided for others to be able to recreate this project easily for themselves- a full video tutorial series would be of great benefit. I know I learn much better from good video versus a static page of instructions so here is the full electronics and PCB step by step assembly tutorial:

Here is the final assembly into the ball and some quick testing/upcoming changes needed:

Upcoming mods on the project will include a higher quality sensor which will likely end up being multiple sensors to more align with industry standard gas analyzers.

Hopefully this project will allow anyone, anywhere to reproduce this tool cheaply and easily anywhere in the world!

I just have found this Project and didnt read much about it. Since im working in that same field  i have some Questions. Whats with Methane ? Often you have Methane inside closed spaces especially in Pipes for contanimated water. Whats up if the gas area you are Measuring is explosive ?

Great job Eric. A project that can make the world a safer place. Thanks for sharing!

Very good project and I think you are really on the right path.  I may want to loointo something like this as a fun project with a real world application.

One word of caution is that you need to think on the lines of a intrinsically safe system.  You do not want the source of the explosion to be the nice little gas sensor you just tossed in the confined space.

Also, to be used for confined space entry or testing atmospheres as you want it to be able to do you will definitely need to ad an O2 sensor.

Thanks Scott.  appreciate the comment.  I'll add a bit of a long form reply here in hopes others may read it.  You are indeed correct that this unit is not intrinsically safe.  In one of the videos I heavily caution that this is in no means certified for any IDLH atmosphere (I also mention those not understanding what IDLH means should not be using the device haha)

I actually hold numerous certifications for emergency response, trauma treatment, confined space entry, confined space rescue, high angle rescue etc etc-  Hence the project being born.  I was simply sick of the commercial gas analyzers we were using and the limitations thereof.  It baffled me while responding to a rescue situation- that I had to use the same exact equipment which caused the need for a rescue situation in the first place (if that makes sense).

The project needs a proper industry standard multi gas sensor in order to proceed into all industries that would truly benefit.  The bigger ones would actually be utility workers, miners, sewer worker etc etc which I truly failed to display here but I did so on purpose as the majority of the population simply doesn't understand the dangers of simply entering a building, trench, vault, or  enclosed space of any kind. By stressing the emergency responders I hoped there would be higher odds of people taking this project forward.

At the end of the project I was able to prove I could build exactly what I needed to keep the guys I was responsible for much safer than the air monitors we were using (just need a better sensor as mentioned before).  I simply don't have the funds to support getting a proper industry standard sensor suite (as you probably know they are crazy expensive) or pursue certifications of the unit for industry use.

My hope is that putting this out open-source will allow others to take it forward (even if it is a big manufacturer) and truly give us the tools to protect lives.  For several years I resorted to using on-person monitors to monitor areas we want to enter- this is just silly.  But we simply don't have a choice in industry right now (that I know of)

Thanks so much for the feedback.  It is truly appreciated.  I will try to do another video explaining this a bit further.  I hope you build something based on this and take it forward.

*edit* Sorry for the long winded response :)  Figured I would save a bit of typing by putting it all in one place even if it was a bit random...

You should check out the MICS series gas sensors, they're very small and sometimes pack two or three different types of gas sensor into one module!

Will take a look.  Thanks for the tip!

It sounds like the MICS-4514 is what you are looking for.

Add flashing LED's and a detachable leash for ease of recovery during hectic events in dark places. If you can manage RGB LEDs in stoplight colors for safe/warning/danger, all the better.

Right now you couldn't toss this into a confined space with water. With a leash you could dangle it in an opening or hang it on the wall and visually notify of hazards at a glance without requiring secondary equipment or using rescue channels.

Great idea on the LED's.  I meant to add some before PCB fab but alas, I missed it.  Next rev for sure.  The leash is something definitely needed for the exact reasons you mentioned.  I didn't mention it in the video etc because it's something I just take for granted we all do when using gas analyzers- we often use poles with lanyards etc to "dangle them" in the area we need to sample.  I've used a good old fishing pole more than once :)  It should be called out I suppose.  Great input!  Cheers

wait what, an arduino talks over 433MHz about gas sensor values? I never realized how much effort you've put in this, awesome! Good luck with the prize!

Thanks very much!  Yep works as intended.  Just mashed some different projects together and got exactly what I hoped for.  Cheers!

Thanks very much.  Cheers

Im a real noob into technology, so i dont know if my word means something, but i think its a really great and original idea.

Thanks very much.  It does mean plenty :)

An electronic guitar concept that can be played effortlessly by touching brass plates instead of pressing strings.
Project Owner Contributor