The Xantrex (also branded under Schneider and Trace) C series load/charge controllers are fairly simple, but robust PWM charge controllers. I bought a unit for my camper; only to recently finally use it during a power outage. In the midst of enjoying a cold fridge I decided I'd love to know just what the solar panels are outputting and keep track of the daily Amp-Hours.

Xantrex does offer a display, but at the cost of around $100, it's not very palatable. Data is great. Cheap data is awesome.

The display shows the following:

As far as features go:

There might be enough overhead left to stream serial data to a PC, but I would recommend using a 16 mHz MCU. This code is written specifically for a 12 volt system with the charger in charge control mode. There are options for 24 and 48 volt settings which do change the scale of some of the voltage readings as well as other unknowns.

The schematics are fairly straightforward. The important bit is the wiring of the RJ25 plug:

Pardon the LCD, Fritzing doesn't have a serial LCD I could pick from. The purple lead is merely a serial Tx from the Arduino. The two LED leads are currently not being used, but otherwise are used to relocate the status LED that is normally found on the charger. 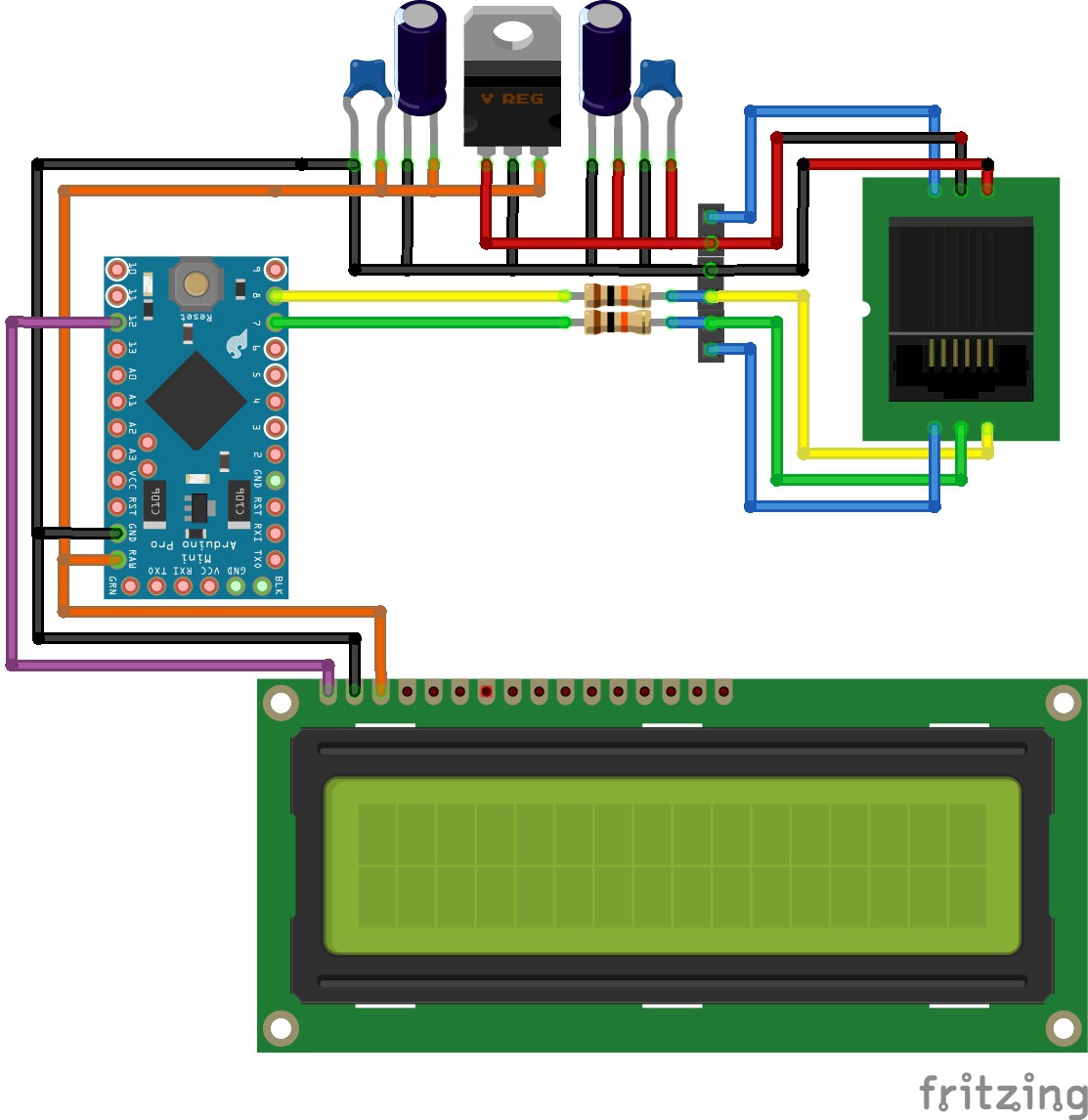 Ultimately the code is not as clean as I care for, but with the challenge of not using any interrupts it was necessary to break up functions and control when they could execute. This is done by using the time between bytes (which is longer than the time between bits) to perform calculations and stream data to the LCD. I tried to be healthy with the use of comments so hopefully it makes a little sense!

This is all written under the Arduino 1.0.6 IDE.

I'm looking to build multiple units that can interface with the C35/40/60 charge controllers, TrueCharge Chargers, and Freedom Inverter/Chargers and send the data to a Single Board Computer like a Raspberry PI over an RS-485 serial link.

What is the protocol of communication use in this project? I2C

Did someone finally does it on a Raspberry Pi?

First, thanks for share this project, its awesome.
I'm build this project for my solar installation, but I have a Arduino ProMini 16Mhz 5v, not 8Mhz.

I removed the serialLCD and replace with Serial connection for watch the data in my PC.

The code need any changes? Any extra delay?

I am having similar results changing  values, wrong results with Arduino Uno 16Mhz and a TFT display board. expecting Timing issues have caused sync issues, Wondering if you solved your issues and how?

Thank you for sharing. I was able to get this up and operational. I am hoping to replace the LCD with Blynk and make it wireless. I'll tell you how it works when I am finished.

I am just in the process of putting a Xantrex C-40 into my home solar system, i really want to try building and implementing a clone of your project.  two questions did i see a picture of a spreadsheet of data you had collected from this device? if so is there documentation on what you did to collect that? and second, is your program available somewhere?

Truth be told, I have no idea,  but I seriously doubt they're similar.

Considering how little overhead is required, at least in this case, a fast MCU is not necessary.

any idea how hard this would be to implement for a raspberry pi with the breadboard?

I'm afraid not, I have very little experience with the Raspberry Pi. Ultimately I've done ample to document what is necessary to read the data produced by the charger, but it'll be up to you to program it in a language that will work on the Raspberry Pi.

Do I think the Pi can do this? Absolutely.

thanks I enlisted another (smarter) buddy on this one, we are thinking the simple solution might be to just get an arduino and interface it with the pi, basically using the arduino to process it into something useful and then let the pi act as a server to farm out the data to a web interface (I'm less concerned about the LCD though that might be kind of nice too)

Yeah, at least the interface side of the work is largely done in that case; the code would only need minor editing to spit data to the Pi.

Let your home automation know which room you're in, your car to know if you're nearby or any other need to detect proximity over a range.
Project Owner Contributor