Extras for Developer Boards such as UPS, Cameras and Media.

Miscellaneous projects that I think are cool!

I created 1-Pixel Pac-Man using a 32x32 RGB matrix which is part of the SmartMatrix bundle. A Teensy 3.1 drives everything, with an Atari Joystick for control.

The original coin-op Pac-Man divided up the playing area into a grid of 28x31 boxes. This concept fits perfectly on the Smartmatrix, leaving room on either side for extra lives, and score (in binary).

Writing something like this yourself is an excellent coding exercise. The logic rules for the game are pretty simple, but there are a lot of them. As everything comes together the complexity builds and it becomes a challenging, yet rewarding exercise.

I wrote a blog post about this project which talks quite a bit more about the hardware. I also made a video to show off the game:

Hardware setup is pretty simple. Follow the assembly instruction that Louis posted. I'm not sure what I plan to do in the future, so I used the surface-mount pads on the back of the Teensy for the Atari Joystick. I used a ribbon cable, and instead of soldering the Teensy in place i used my own pin sockets. There are actually enough extra breakout pads on the back for two joysticks and I may write some head-to-head games in the future. 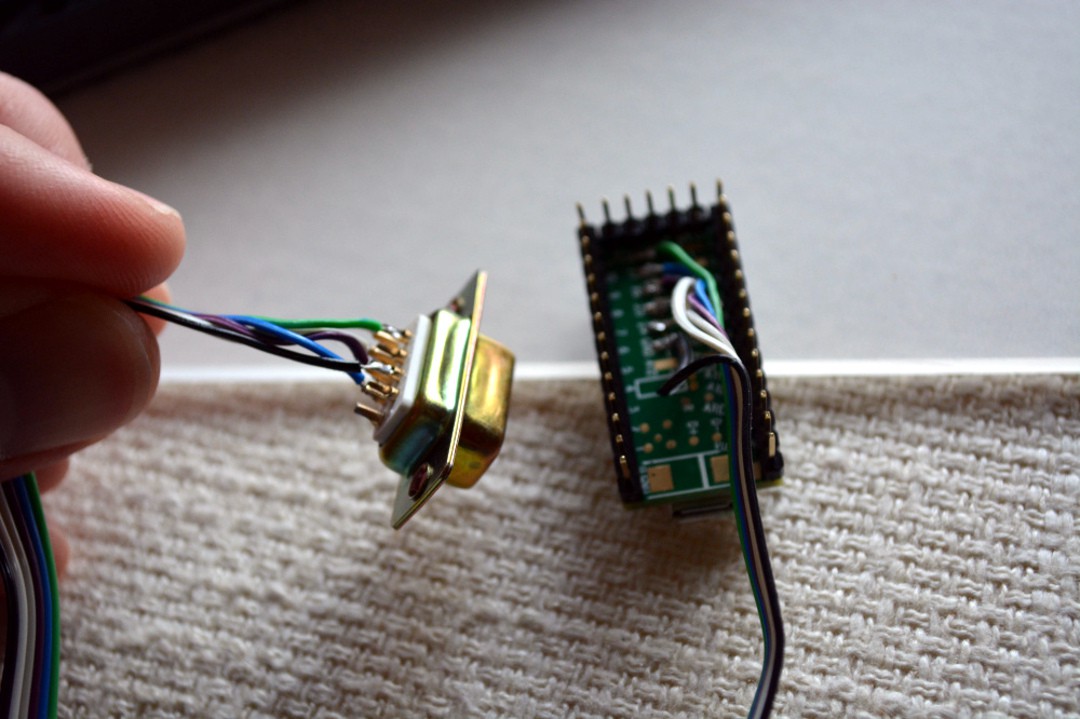 The Atari joystick uses a standard DB9 connector, which I soldered at the other end of the ribbon cable. I'm limiting the display brightness to 50% (which is still really bright) which keeps this application's current draw below 2A. That makes it possible to power the game with an external cellphone battery so I've connected a USB cable to the terminals on the LED module.

I've been trying to get this to work with several Arduino IDE versions. The 1.6.3 version is not recognised by the Teensy installer, so I tried some other versions that are.
I keep on getting this error when I try to compile the sketch:

matrixman:33: error: 'matrix' was not declared in this scope
matrix.swapBuffers();

'SmartMatrix' does not name a type

I'm not much of a programmer, and I'm currently not able to wrap my head around it (even though it looks simple): what am I doing wrong?

What version of the Arduino IDE are you using? Under 1.6.4 the compile get's stuck on the .elf link and never finishes. The project compiles under 1.0.6 but numerous functions need to be declared static to avoid duplicate symbols during the link.

Thanks for the quick reply. 1.6.3 works but I still get the duplicated symbols. I defined everything static that the compiler was complaining about and it completes. Not sure why I have to make changes but it is compiling so now I just have to wait on USPS to get my kit!

Make that FedEx, just got the shipping notification!

Thanks Mike. I just compiled it on a second machine (Windows 8.1 on both) using 1.6.4 without needing to change anything and it finished without issue. Something must be strange on the other system.

Just tried it on a 3rd machine (laptop windows 8.1) and had the same problem as the first. 1.6.4 does not complete the elf build. Downgrade to 1.6.3 and needed to add static to get the build to finish. Hopefully this will help someone else if they run into it also.

Dude this is the coolest idea I've ever seen implemented on a 32x32 LED matrix!

Thanks! I had already done Tetris and Snake (on different displays) so I wanted a bigger challenge. This turned out to be a lot of work to implement but it was a lot of fun too.

I cringe a little when I see wires soldered to pads without a strain relief, maybe I have pulled off too many, but I thought of your project when I saw this: https://forum.pjrc.com/threads/26071-Using-all-Teensy3-x-pins-with-a-socket

2x14pin header, inner pins replaced with 90deg pins. Otherwise, I hope you get some relief :)

Yeah, I usually hot glue the cable to the board... Still need to do that!

Hi Mike. The video is marked private :( May we see it? Nice hack bamboo master!

Official Hackaday Prize Entry
You don't have to tap a screen or press a button for your electronic dice fix, roll one of these and get the results anywhere!
Project Owner Contributor