Transmittance and reflectance are two basic types of photoplethysmography. For the transmittance PPG, a light source is emitted into the tissue and a photodetector is placed on the opposite side of the tissue to measure the resultant light. Because of the limited penetration depth of the light through organ tissue, the transmittance PPG is applicable to a restricted body part, such as the finger or the ear lobe. However, in the reflectance PPG, the light source and the light detector are both placed on the same side of a body part. The light is emitted into the tissue and the reflected light is measured by the detector. As the light doesn’t have to penetrate the body, the reflectance PPG can be applied to any parts of human body. In either case, the detected light reflected from or transmitted through the body part will fluctuate according to the pulsatile blood flow caused by the beating of the heart. Easy Pulse Plugin uses the HRM-2155E optical sensor from Kyto Electronics Co., China. It operates in transmission mode. The sensor body is built with a flexible Silicone rubber material that fits well on the tip of a finger. Inside the sensor case, an IR LED and a photodetector are placed on two opposite sides and are facing each other. The following picture shows a basic setup for a transmittance PPG probe. The amount of IR light transmitted across the finger depends on the blood volume in the tissue. The transmitted light intensity thus varies with the pumping of the blood from the heart, and therefore, is synchronous with the heart beat. A plot of this variation against time is referred as photoplethysmographic or PPG signal. The PPG signal consists of a large DC component, which is attributed to the total blood volume of the examined tissue, and a pulsatile (AC) component, which is synchronous to the pumping action of the heart. The AC component, which carries vital information including the heart beat rate, is much smaller in magnitude than the DC component. A typical PPG waveform is shown in the figure below (not to scale). 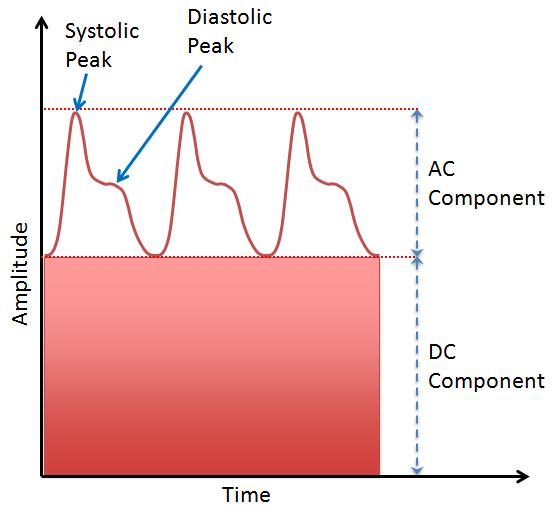 The two maxima observed in the PPG are called Sytolic and Diastolic peaks, and they can provide valuable information about the cardiovascular system (this topic is outside the scope of this project). The time duration between two consecutive Systolic peaks gives the instantaneous heart rate.