Codename MrBeepers. Any similarity to the popular electronic game from 1978 is purely coincidental. This is the project I referred to in the last project log that spawned the AVR Listener side side project.

[filmed through a 4" ring magnifier to support the phone, so the video is a bit distorted.]

I built this project as a Christmas present for my family's secret Santa recipient, so don't tell (as it's not yet shipped). Fortunately I don't think the target audience follows my Hackaday projects. 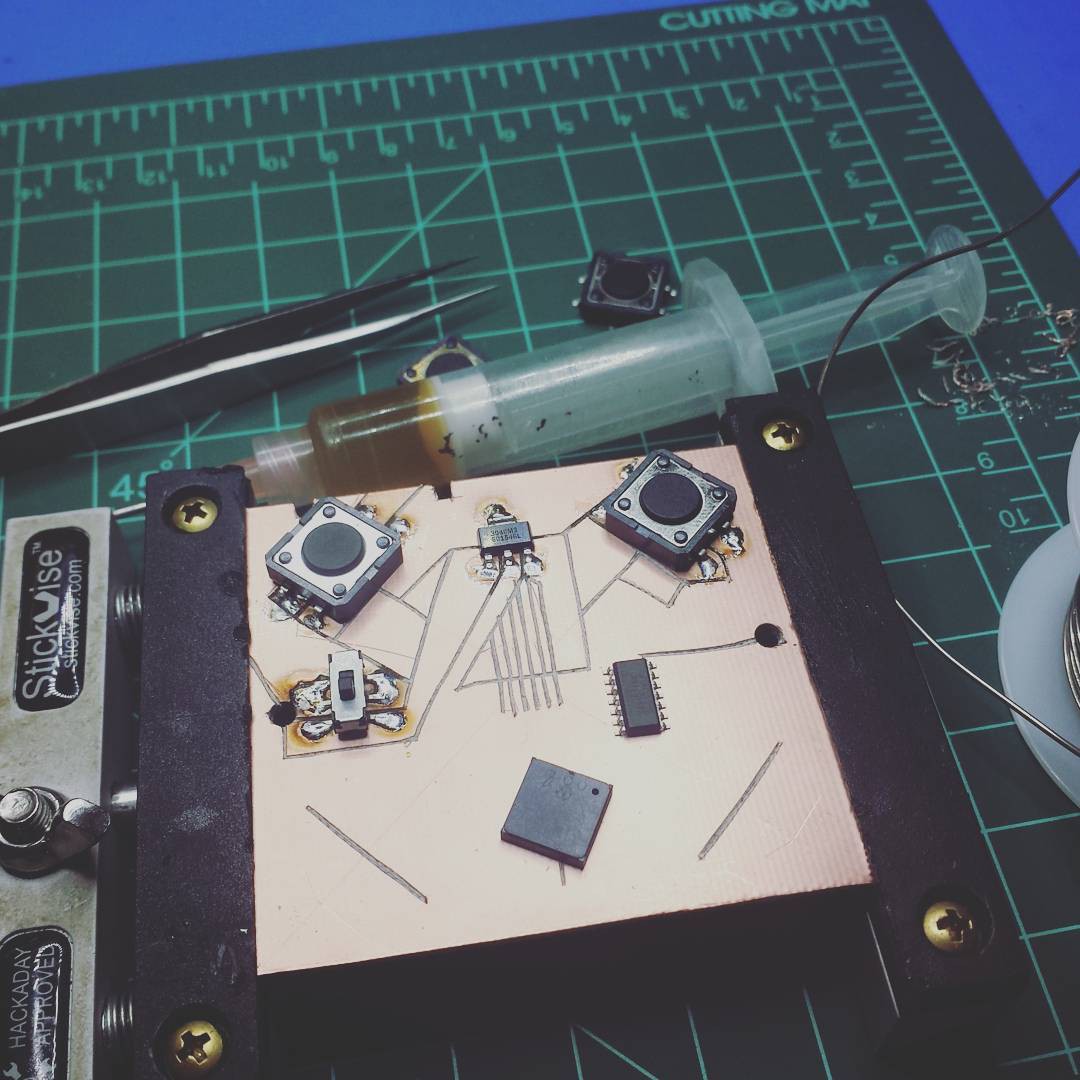 [a thousand apologies for the unnecessary Instagram filter. grow up, zach.]

As with many freehand FR4 projects, this one kinda designed itself as I went along. I based the overall geometry of the board on the 4xAA battery packs I discovered as part of the #NeuroBytes project. They use PC pins for mounting, and can be secured to a circuit board using a pair of McMaster nylon rivets that are amazingly the perfect size. [1.6 second exposure at f22 and ISO200. it took a few trials to get the right pattern to play back in order to light up all four LEDs.]

I'm especially proud of the ergonomic-ish and aesthetically pleasing layout of the PCB; the four LEDs and buttons are symmetrically oriented in the four corners of the board, the main processor is in the center, and the other main circuit elements (power switch, regulator, and piezo elements) are in-line as well. The pushbuttons are some of the largest I could find, and are quite pleasing to the touch. At some point, I may spin up a proper PCB for this project, and likely won't change much about the layout; it works quite well. Okay, I may add a set of programming pogo pads, as the soldered on leads were a bit of a pain.

Initially, I used a smaller piezo element driven using an NPN transistor; however, the element wasn't nearly loud enough, and through a few happy accidents I discovered that driving the devices directly from the ATtiny's I/O ports didn't seem to cause any issues. I increased the size of the piezo element and added a second, allowing me to create the spooky and annoying two-tone harmony heard in the video at the top of this post.

Firmware is pretty simple. I'm trying to use better programming practices (hah!) so I broke out a hardware abstraction layer into a separate *.c and header file. Timer0 is used as a 1ms tick for game logic, while Timer1 is used in Fast PWM mode (since that way the TOP values are double-buffered and can be changed on the fly) to generate interrupts for tone generation. I originally used the compare output pins directly for the piezo elements, but changed to standard pins with ISR-driven toggles so I could produce two different tones simultaneously. As usual, button debounce is handled using Elliott Williams' pattern-based method, and the pseudo-random initialization is based around @Vojtak's implementation from #Simon game with ATtiny13. The recursive algorithm is seeded using an unconnected ADC pin and it's good enough to make the game feel random; I didn't implement the fancy watchdog timer jitter deal he did so it's not perfect. The game-over state is terminal -- it generates a low tone and then puts the processor to sleep, so the user has to hard-reset the device to play again. Yeah, I got tired of programming towards the end, and no, unlike his excellent and compact code, my less-capable implementation comes in over 1k (1356 bytes exactly).

Nothing past the code dump, so feel free to stop reading now (recommended). Everything is covered under the MIT License.