Toorcamp 2016 was awesome, as always. Many thanks to the whole awesome crew that puts it on, and to Doe Bay for hosting it.

First, a quick overview -- we put the boat in the water and it remained upright. However, we had a bad WiFi dongle so we were not able to do much more with the boat. I gave a talk about the boat on Saturday afternoon.

Doe Bay was the best location yet for the best Toorcamp yet. We set up the Hackerboat work area/boat storage down near the Doe Bay store, right by the water. Great view, but a little exposed to the wind. Just about everyone came by that area of the camp, since it was also right next to the Social District of the camp. 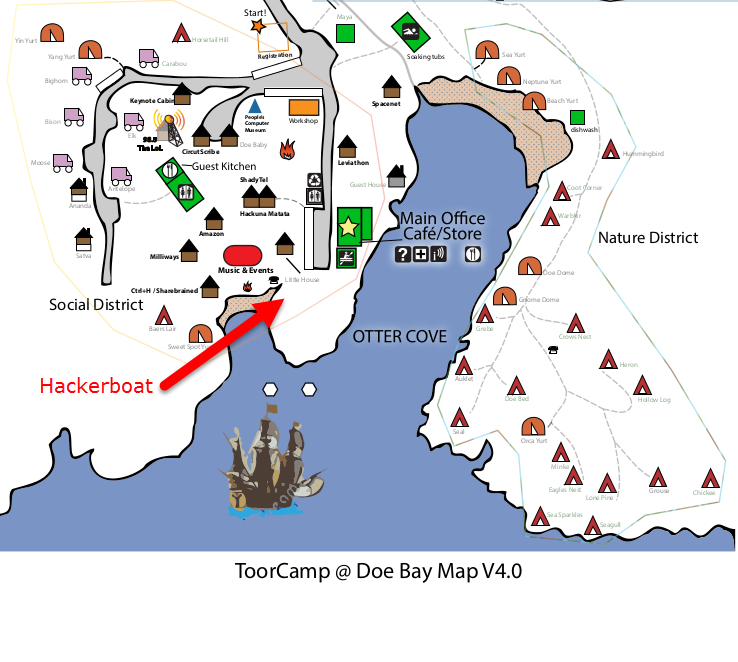 I got there first, on Wednesday and got the boat off the truck and set up on shore with the help of some nice folks at camp.

The new software wasn't quite ready for Toorcamp. I always have visions of hacking on awesome shit at Toorcamp, but in the words of Rocky Squirrel, that trick never works. There's too much to see, too many people to talk to, and too much beer to drink. The only substantial thing I got done was creating the slides for my talk on Saturday. 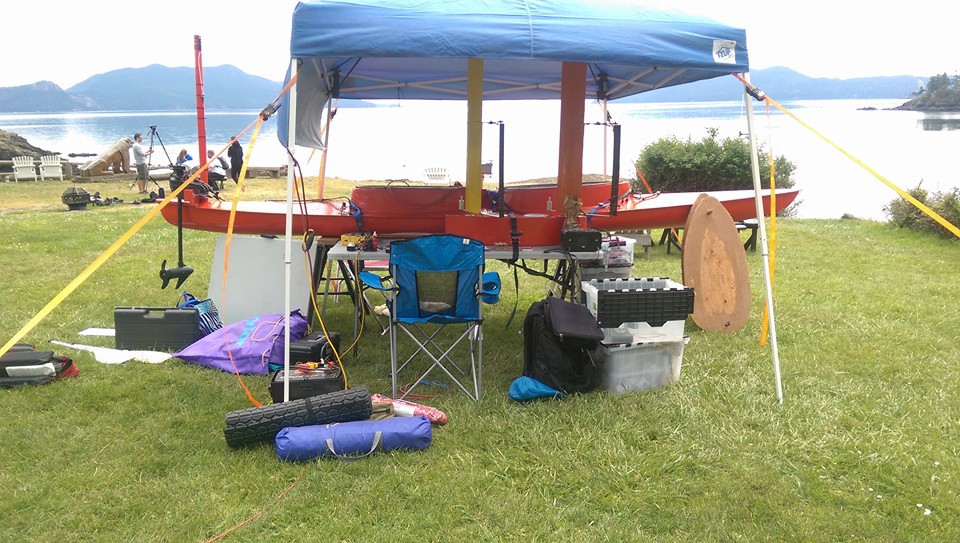 Jeremy, Alex, Wim, and I got together to discuss what we could do to get the boat in the water on Saturday morning. We discussed rolling back to the software we used last October. However, we realized that the REST interface we used for the Arduino gave us the opportunity to control the boat by SSHing into the Beaglebone and hand-typing commands to the Arduino from there. Command-line robots for the win, or something like that. Very hackery, and enough to let us get some data on motor performance and tune the steering loop constants.

My talk went really well -- I think I held the audience well and got across our goals and where we are in the project. Frank Heidt of Leviathan Security was kind enough to offer a thousand dollars of matching funds, which helped us raise money at Toorcamp -- we left with $1350 we didn't have before, which is going to be a huge help in our near future work. Many thanks to everyone who donated!

We considered putting the boat in the water after closing remarks. However, given the wedding and approaching darkness, we decided to put it off until Sunday. This gave me some time to nail down the procedure for issuing commands via terminal window and fix a wiring error introduced when I 'fixed' the servo wiring the day before. Once that fix was confirmed, the critical hardware was all ready to go. The horn and status lights were not working, but we decided we could do without them.

On Sunday morning, we were able to corral a substantial number of volunteers to help carry the boat down to the beach and put it in the water. Alex volunteered to pull chase duty in Jeremy's inflatable kayak. When we powered up the boat, the entire network came to life and things looked great for a good test.

Pavel was kind enough to loan us an extra HT for communication between the shore and the chase boat. We quickly discovered the the microphone on Jeremy's HT had failed, and Pavel loaned us a handset to use with Jeremy's HT. As soon as we had the HTs working, the wifi dongle that connects the Beaglebone to the radio box failed. We didn't have a spare on hand, so this was the end of test for the day. We've already acquired some better quality wifi dongles to test in its place.

On the positive side, we confirmed that the boat is stable even without the ballast bulb. The rocks on the launching beach managed to break the straps holding it on. While the boat was a little bit tippier without it, it's not in danger of tipping over. This appears to confirm that a big part of our stability problems at the last Toorcamp were due to poor battery retention.

The only reason we're not getting back in the water this weekend is because it's Father's Day on Sunday. Our current plan is to prep for launch this Friday night (25 Jun) and launch the following day from the Don Armeni boat ramp in Seattle.

It is easy to fall prey to incompetent hackers, but after reading this, i hope you do not ever have to be a victim of hackers who are not able to complete the job given to them. I was once a victim but not anymore and this is because i have found the best hacker ever than can hack iPhone, WhatsApp, facebook, Instagram, Kik, wechat spying etc and i wish to let you know that cryptocyberhacker@gmail.com is the best you can ever think of and he always deliver and reliable.