This is a device I've needed for a long time. Raspberry Pi has good community support, is maybe the most available Linux SBC and therefore is really good to use as a tool for repairs and development in general - and I have some spares I can put to work. It is my BusPirate, flash/AVR/PIC/whatever programmer, music player for creating good work atmosphere and whatever I'll need to get the work done.

tl;dw (too lazy;didn't write) I use a copy of this Adafruit shield for my prototyping: 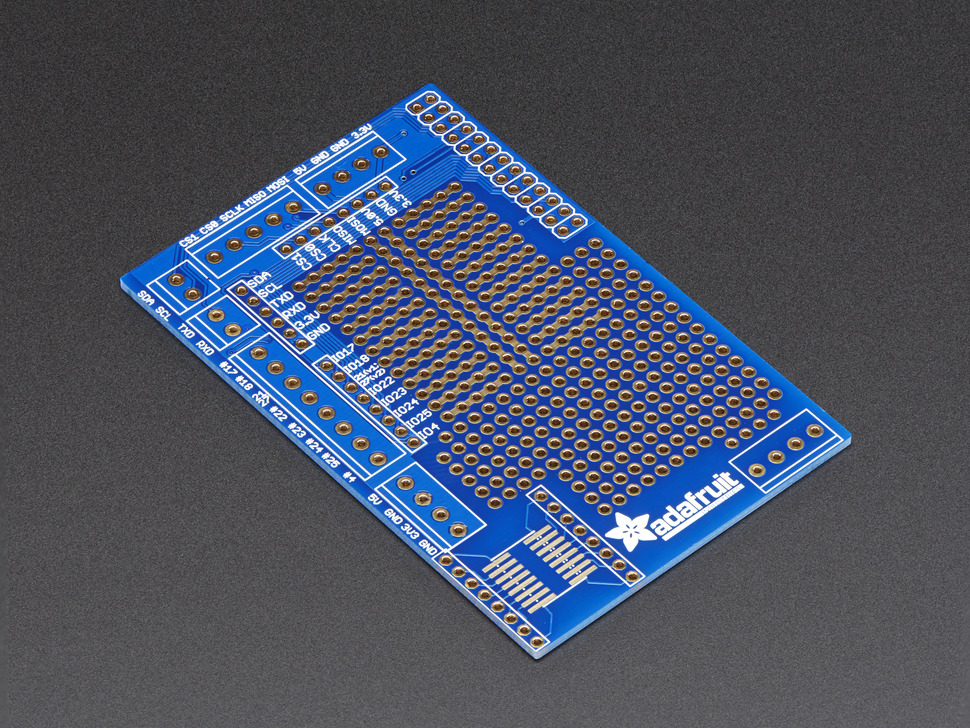 It's got some DIP sockets in it, and I plan to add more - maybe a socket that'd go across the entire board =) I'll do a more detailed writeup on the hardware part when I finish the case, basically, when I get some time to draw some more parts of my case for laser cutting - which might be complicated because my goal is to make the case universal enough to be useable for all the generation of Raspberries, including all the cutouts and, of course, GPIO header positioning =) You can see some photos of the device itself in the writeups though.
I also use a Raspberry Pi A - yes, from the first generation. It's useless for many projects because of lack of network connectivity&RAM, but it's great to breathe a new life into it in some permanent installation, and I don't really need USBs for most of the hardware hacking with this =)

I assume this work-bench will have bigass double throw main switch with labels: "Bench-on" and "Bench-off".

My project 'Gadget' is based around the software side of this kind of setup, perhaps you'd be interested? Do you have any kind of buffer or level shifting for interfacing 5v/1.8v devices? I think that's the main limitation for me

Cool project, man! I'll look in your code later when I have some time, but the logs are promising. I have some of those really cheap I2C level shifters, as well as some unidirectional buffer ICs - and a GTL2003 I found available in a local shop and immediately bought =) Are you looking for something?

There's no real code yet, just me hacking around at the moment. I finally got my new Zero set up yesterday so I can get on with the code in earnest.

I was just curious really - I'd never seen that GTL2003 before, it looks fantastic. Certainly that's some good food-for-thought

Oh, great! What are the interfaces you'll be using that for? I saw you mentioning AVR programming and I2C interfaces, I've also programmed PICs with picpgm and SPI eeproms with flashrom, as you might have read already. I'll also set up a cool interface for this thing... This is my new thing I stuff everywhere because it's so useful - pyLCS https://hackaday.io/project/10001 . The difference is that with pyLCS I can make my Pi a standalone programmer you just plug in MicroUSB for power/charging and use some buttons to navigate the interface, upload/download firmwares to/from chips, maybe connect to a network and use the CLI to do some more advanced things, or maybe set up a hotspot with bridging, maybe a TFTP server, or maybe use it as a frontend for my BitScope Micro... To sum up, my thing is planned to be more self-contained, while yours will leverage processing power of desktop PCs. Anyway, I think we'll exchange quite a bit of information =)

Yeah, it was like "I'll just search for local ULN2003 prices by typing 2003 in the search... Oh, what is that thing?" Both SPI and I2C compatible, it's just that one side has to be higher voltage than another, so you can't really do 3.3V to 5V and then 3.3V to 1.8V without moving pins around physically. Guess one could work around that if necessary, I even more or less start to imagine how to =)

Yeah basically I want to be able to interface <any> (1.8-5v) voltage to the Pi on any protocol. I see I would need to swap the "high" side somehow so that's a shame, but probably workable (though I can't see how to do it without taking up some I/O :-(. Perhaps I can hijack the HDMI port's i2c bus for a configuration microcontroller)

I like the idea of pyLCS - I've done a similar thing with an AVR and HD44780 but for microcontroller pojects so no real software framework on the "host" side, just a UART read/write interface: write goes to screen, read comes from buttons. I still have the hardware but I think the software got lost a long time ago.

I think we have two very complimentary projects :-)

I'm entirely focussing on "Pi as a peripheral" at the moment, but I reserve the right to pull in any modules you open source when I want to extend the scope ;-)

Sorry, somehow didn't see your comment =(
You don't necessarily need to use that GTL. Alternatively, there's always an option to swap it manually or, I don't know, have 2 GTL boards =D

Had a lot of updates on pyLCS this week, i'm releasing it in a few days If you think that'd give some value to your project, feel free to contact me on help/instructions =) I've made myself a simple I2C scanner app, for example, and it's tremendously helpful when I need to simply debug whether things are connected properly. I also think it'd be easy to implement I2C read functionality, maybe even I2C write =)

The 2016 Hackaday Prize
Got a Raspberry Pi ? A few more bucks turn it into a networked SPI Flash chip reader/writer
Project Owner Contributor