The title says it all

Functional prototypes are running on the ATTiny85 in Arduino C, but I'm excited about the possibility of moving to the tiny PI Zero.

Okay so what do I mean this is a stupid robot? Glad you asked, here we go!

The instructions are pretty specific, and require the bot to know a lot about itself: How to operate the its motors to drive, how to read a light sensor, etc. It has to know what's connected to it, and how to use it correctly.

In contrast, Zero doesn't know nothin'. It has no idea what's attached to it, or how to operate those things. And it doesn't have any specific instructions at all. That sounds bizarre but this will start to make sense soon.

What could such formless nonsense even do? Well, that depends.

If the instructions ran when "In Pin" happened to be connected to a light sensor and "Out Register" (by sheer luck) held the previous value of the sensor...and the sum of the robot's age and sensor reading were a value appropriate for sending to a servo...and (again by luck) a servo was attached to "Out Pin"...

Then that servo would move in response to some sort of light stimulus.

That is a lot of sheer luck! Flipping 8 coins and getting all heads kind of luck. You'd have to flip them like, a billion times, right?

So if you flip 8 coins 256 times, you're almost certain to get all heads at least once. If not, then at least by your 512th flip. Unless something is very wrong with your coins, or your universe.

256 coin flips will take you a long time, but these days a $2 microprocessor on two on AA's can do about 16 million per second.

Getting lucky is pretty easy when you flip coins that fast.

But that can't work - throwing a bunch of dice in the air and simply hoping they fall in just the right way to make something useful?

You are absolutely correct: The first throw of the dice will probably produce nothing useful.

But Evolution isn't just random - its other engine is natural selection.

Once the GA has lived its life (its "fitness test"), it is scored on how well it performed. In the prototype, that is how many times it triggered a motion detector (its "fitness function").

Only the combination of random dice which performed best is chosen as the winner. Several copies of the winner are made, but each slightly changed by a random mutation in its DNA.

Repeat this process over and over and (tada) - Evolution on the ATTiny85. 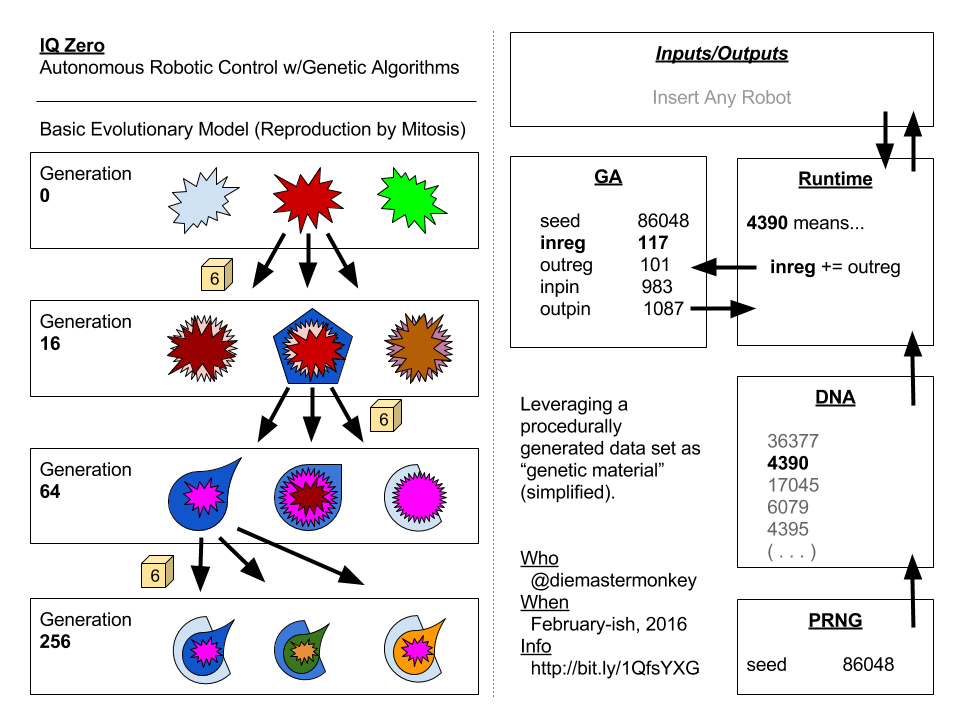 No, I don't - I've never seen one of its programs. It would be almost impossible to interpret anyways.

Zero's "DNA" - most of which becomes its program - is a very long list of "random" data.

I've put random in scare quotes for those who know no such thing exists - certainly not in digital computers. No matter how you work it, everything digital is completely deterministic.

To generate a random value, most platforms require some sort of "seed" value for their PRNG (Pseudo Random Number Generator). The PRNG uses this seed and some weird formula to generate a long list of numbers that you would have have difficulty predicting.

But given the same seed, that formula will generate the same list of "random" numbers, in the same order, every time. Of course that's not random.

This can be real problem for applications that need random data, but for Procedural Generation techniques it...

This is really cool! Great writeups!

I've been thinking about making some solar robots that hunt for light and avoid predators like the cat.

I've wondered how to do things like "I have some light, I've previously had more, should I stay here or waste energy hunting for more light". Or "I'm getting a lot of light but getting attacked all the time, should I try to move somewhere I'll get attacked less?".

And what patterns to move in (straight lines, random turns) etc.

This sounds like it would be a great starting point for that and I'm following closely!

Muribot is a low-cost, easy to use, open-source and feature-rich learning tool for exploring programming, robotics, and STEM fields.
Project Owner Contributor