In Part 2 of this mini magnum opus, we introduced the concepts of voltage (V), current (I), and resistance using a water analogy (we also extended our analogy to introduce the concept of charge). Now it’s time to delve a little deeper into the way in which electricity works.

Before we proceed, we first need to understand just a little bit about how the universe works. All of the physical objects we see around us -- tables, chairs, houses, clothes, animals, people, and cheese (I like cheese)  -- are formed from teeny-tiny particles that are so small they can only be seen by scientists using very special equipment.

The three types of particles we're interested in here are called protons, neutrons, and electrons. I tend to think of protons and neutrons as being the equivalent of big, ponderous, lethargic adults who tend to sit on the sofa chatting about how much harder life used to be when they were young. By comparison, electrons make me think of small, boisterous, energetic kids racing around and around making nuisances of themselves.

Protons are relatively large, and each proton carries a single positive (+ve) charge. By comparison, electrons are really, really small; even so, each electron carries a single negative (-ve) charge that is the exact opposite of a proton's positive charge. Last, but certainly not least, neutrons are pretty much the same size as protons, but they are electrically neutral, which means they don’t carry any charge at all.

Do you remember playing with bar magnets at school? Each magnet has a north pole at one end and a south pole at the other. When the magnet is freely suspended, its north pole is the one that ends up pointing towards the Earth's North Magnetic Pole in the Artic. One of the interesting things you may recall is that the north pole of one magnet will attract the south pole of the other, and vice versa. However, their north poles will repel each other, as will their south poles. 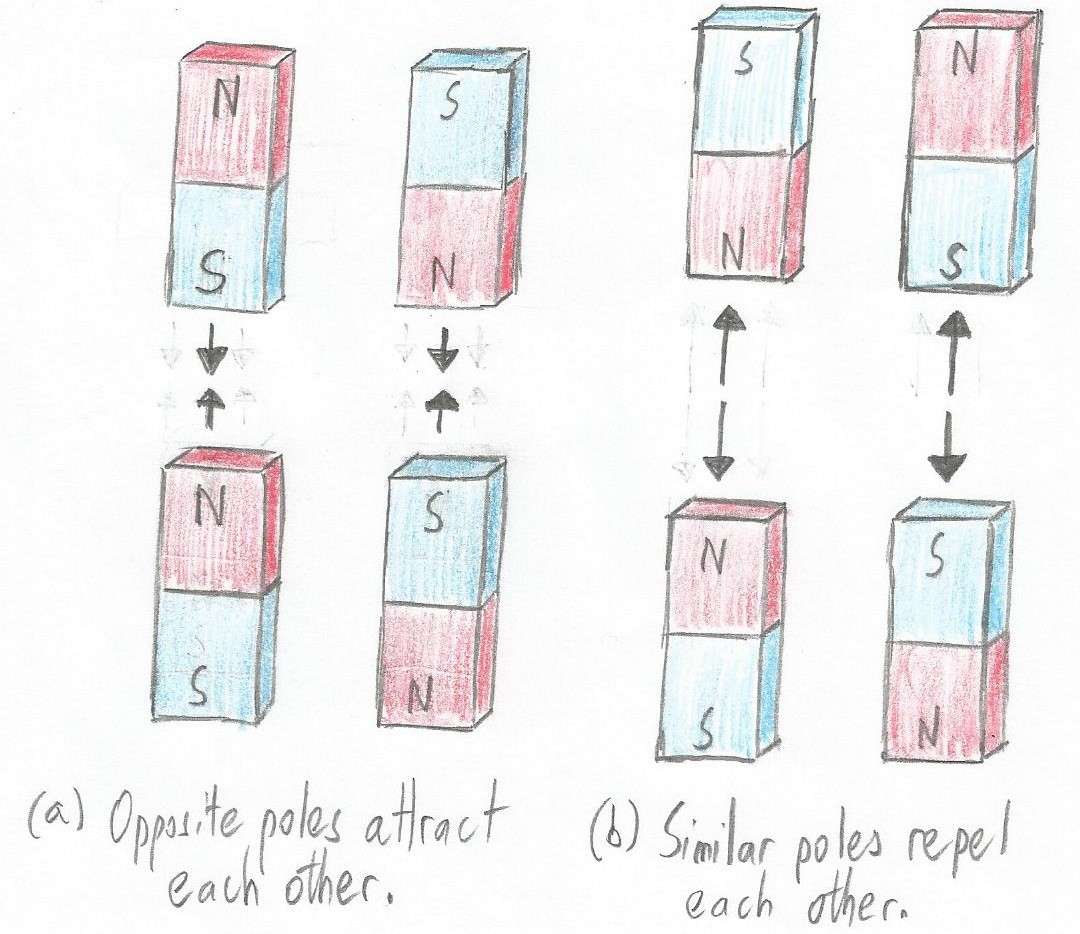 Magnets can both attract and repel each other (Image source: Max Maxfield)

Well, something similar happens with protons and electrons. A proton and an electron will be attracted to each other, but two protons will repel each other, as will two electrons. Of course, being electrically neutral, neutrons could “care less,” as they say. 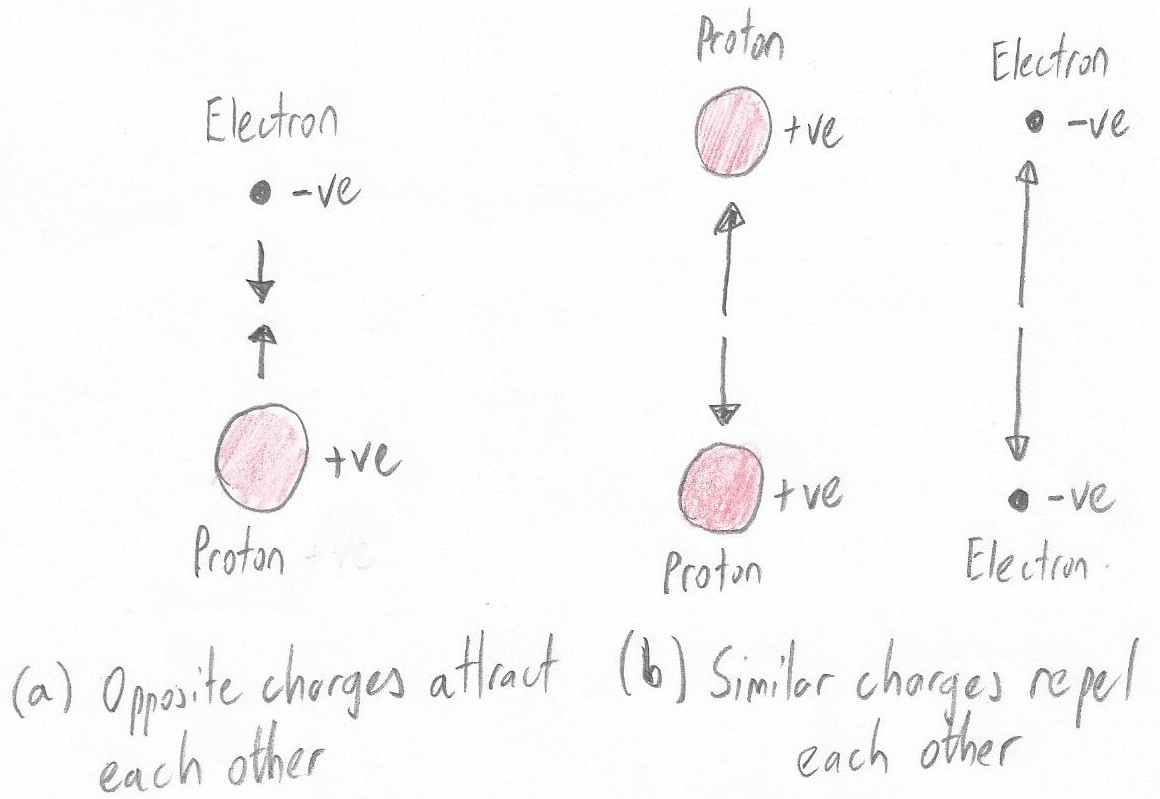 Protons and electrons are attracted to each other (Image source: Max Maxfield)

One very important point to note is that, unlike bar magnets, protons and electrons never actually touch each other. Instead, the electron races round and round its adopted proton like a frisky little dog on a leash running around and around its owner's feet.

Protons, neutrons, and electrons don’t really like their own company and they aren’t particularly happy if they are left on their own. Instead, they are sociable little fellows who like to gather together to form groups that we call atoms. The protons and neutrons form a tight ball called the nucleus in the center of the atom, while the electrons zip round and round some distance from the nucleus. One way to visualize this is that electrons orbit the nucleus of an atom in the same way that planets orbit the Sun. 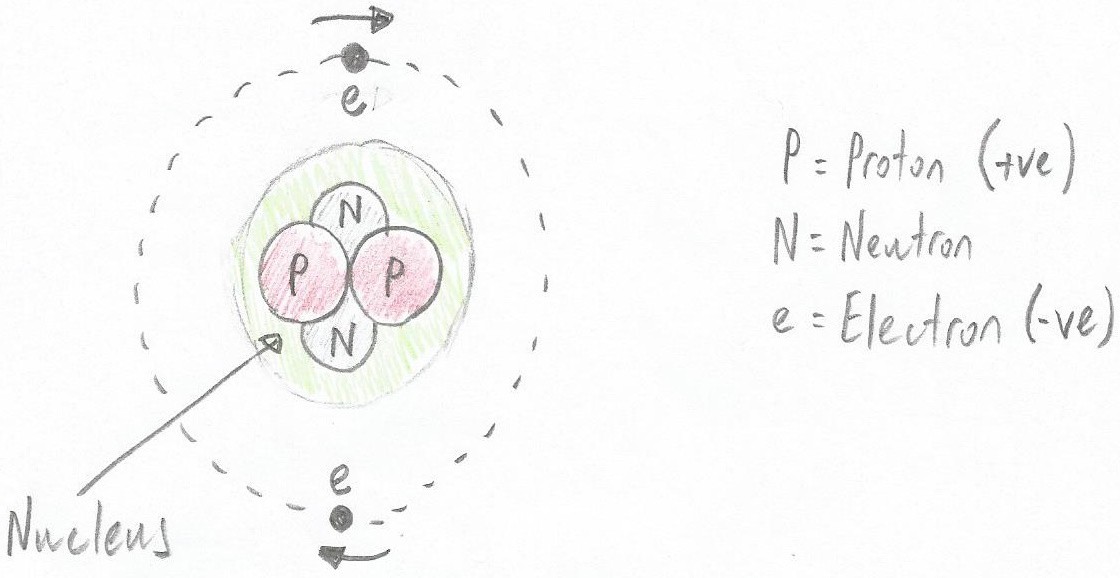 Now, remembering that two or more protons will repel each other, you might wonder how they manage to keep company in the nucleus. The answer is the amiable old neutrons, which act like glue and hold everything together.

As illustrated below, the number of protons determines the type of the atom. Also, by default, each proton in an atom has a corresponding electron, thereby leaving the atom electrically balanced. There may be slightly different flavors of each atom based on the number of neutrons (these flavors are called isotopes). For example, a hydrogen atom has one proton and one electron. The most common form of hydrogen doesn’t have any neutrons, but there are isotopes with one or two neutrons. 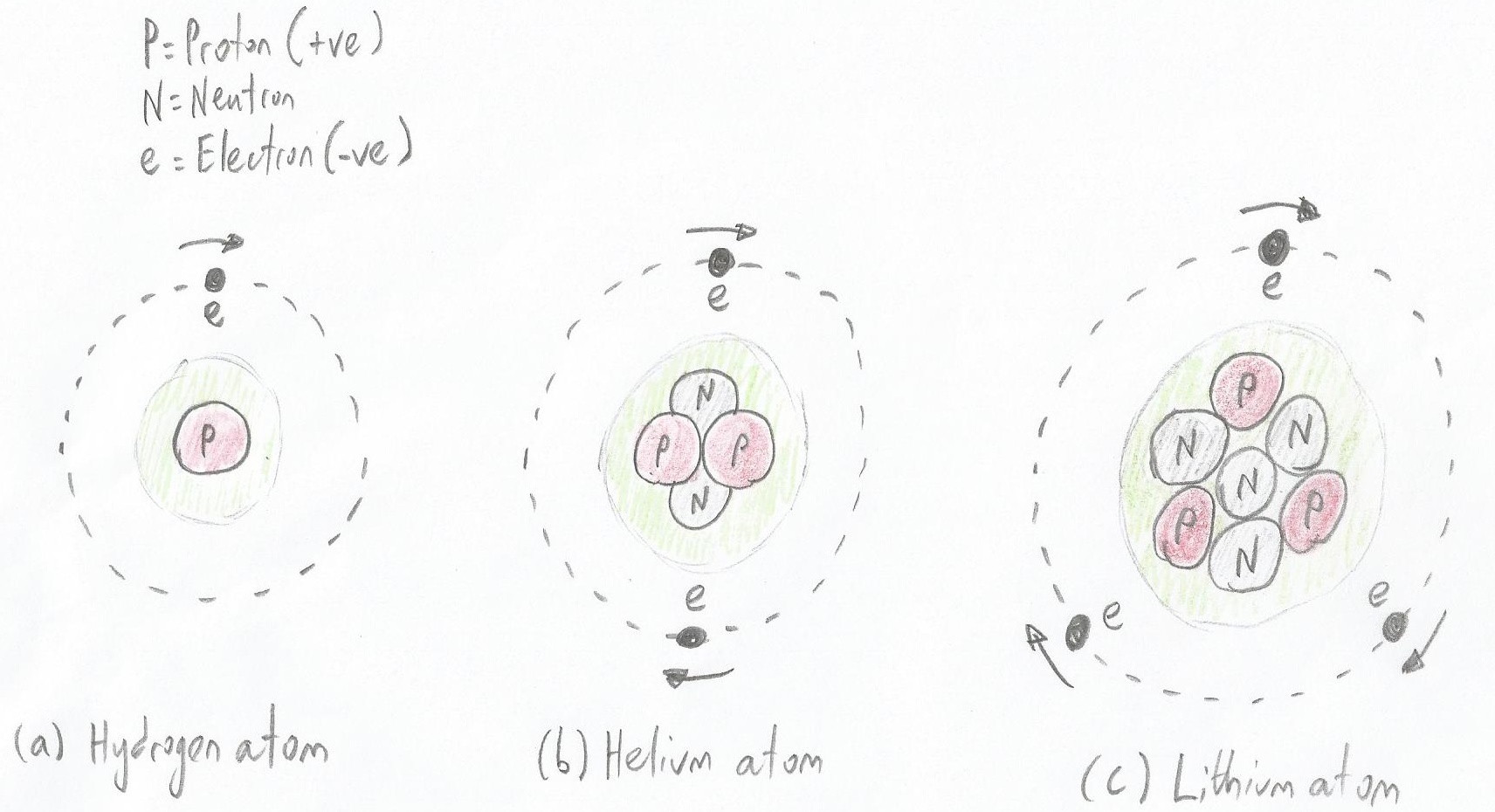 The number of protons determines the type of the atom (Image source: Max Maxfield)

The term “element” refers to a substance that is composed entirely from one type of atom. There are close to 100 naturally occurring elements*, including things like oxygen, carbon, silicon, iron, copper, and gold. (*The actual number depends on who you are talking to, how they classify things, and whether you limit yourself to elements that can be found on Earth, or if you also include elements that can be found somewhere in the universe.) In addition to the naturally occurring elements, there are also 24 or more synthetic elements that scientists have created in their laboratories (the reason I say "or more" is that you never know what those tricky scientists will get up to next).

Different mixtures of these elements can be combined to form an almost infinite number of materials, resulting in everything from inanimate things like rocks and glass, to interesting things like bacon sandwiches and ice cream (I like both, but not mixed together), to living creatures like you and me.

In my next column, we’ll consider how we can use our knowledge of atoms to create things like batteries, and how we can then use these batteries to power our electrical and electronic circuits. Until then, as always, I welcome your comments and questions.

Somewhere the concept that current is a flow "rate" and NOT an amount needs to be pointed out. Using the water bottle-battery analogy the amount of water removed (charge) is (flow rate) x (time) an amount. When I was teaching I used many water analogies however as time went on it just seemed to add another unknown. (Time frame was 1973 to 2010.) YMMV  You're doing a good job, this is not a criticism. IMO

Good point -- I just went back to take a look at Part 2 (https://hackaday.io/page/7190-electronics-microcontrollers-for-absolute-beginners-part-2) -- I agree that I need to be a bit more specific -- I'll try to work out some better words. I remember when I was starting out being told that I shouldn't say "flow of current" because current is the flow of electricity so saying "flow of current" is the same as saying "flow of flow of electricity"

Not quite sure if I like your attributing of the strong force to the neutron.

Seriously? LOL  I'm doing my best here to paint a picture to build a conceptual framework -- a high level view of how everything "works" -- at this level (not talking about the four fundamental forces, including weak and strong), saying that the neutrons act like the glue holding everything together gives everyone something to wrap their brains around. I fear that going into anymore detail at this point would serve only to confuse the issue. To be honest, if we probe deep enough, below protons and neutrons, down to quarks, and the way things are at the deepest levels, I'm not sure if our current theories of the four fundamental forces hold up -- we still don't have a good way to tie gravity into the standard model -- and we still have no clue as to what time is. Have you seen my columns "Swimming in a Sea of Quantum Foam" ( https://www.eeweb.com/profile/max-maxfield/articles/swimming-in-a-sea-of-quantum-foam ) and "Is Time Truly an Illusion?" ( https://www.clivemaxfield.com/is-time-truly-an-illusion/ )?


Yeah, ... the fine line between being simple and being accurate. That is why I did not and do not disagree - just Hmmm-ing to myself. Actually, my comment is more of a compliment to the way you are approaching this. I do like it, but want to share my Hmmm... -ing thoughts.

Actually, I'm just happy that you are reading my columns -- I have a whole road map in my head of the things I want to talk about -- I'v met so many people who desperately want to get into  electronics and microcontrollers, but they feel overwhelmed by the fire-hose of information. That's why I'm taking things slow and trying to establish a foundation that sets the scene -- wait till you see Part 4 LOL