A simple and inexpensive way to image and analyze subtle surface details on objects.

Reflectance Transformation Imaging (RTI) creates a computerized virtual lighting model of an object's surface using multiple photos taken at different lighting angles. It reveals subtle surface details difficult or impossible to see without complicated & expensive techniques. It's used in archaeology, paleontology, forensics, numismatics, and any other field where you're interested in seeing enhanced surface details. Custom-made automated systems are available, but cost tens of thousands of dollars. The technique can be done manually, but it's tedious and time-consuming. My system is fully automated, and can be put together for less than about $600 (plus camera), making it affordable for schools, museums and individuals.

Ever hold an object at an angle to the light, to see subtle details in the surface? Now imagine that technique on steroids, and you have Reflectance Transformation Imaging, RTI for short. Photographs are taken of an object at multiple lighting angles with the camera position fixed. These images are then analyzed and combined in a computer to create a virtual lighting model, where you can arbitrarily set the lighting direction to maximize the visible surface details. What's more, because the lighting model is in computerized format, it can be mathematically manipulated and changed to further enhance surface details.

The technique was invented in 2000 by Tom Malzbender of HP Labs, and originally intended for use in more realistic lighting of 3D graphics; it's still used for that purpose under its original name of Polynomial Texture Mapping (PTM). Malzbender quickly realized RTI's applications in imaging subtle variations in surface details, particularly for archaeological artifacts. Since its development, RTI's most famous use has been in helping to decode the Antikythera mechanism, the oldest known computing device. But it's also been used for imaging ancient Middle Eastern writing tablets (e.g. Proto-Elamite, Cuneiform, inscription "squeezes", and Aramaic); ancient coins; ancient manuscripts (links one, two, three, four); and many more. There are also other non-archaeological applications, such as forensics and paleontology. For more information on the technique and its applications, visit the website of the non-profit Cultural Heritage Imaging, where you'll also find links to free information and software to aid in the creation of processed RTI data files. A search for RTI on YouTube will bring up many videos on the technique and its applications.

My original interest in RTI was for use in imaging and analyzing prehistoric lithic artifacts, stone tools like arrowheads and dart points. It is often very difficult to photograph these in a way that shows the obvious details of their manufacture. So difficult, in fact, that it's standard practice to use line drawings instead of photographs. I presented a talk on using RTI for imaging lithic artifacts at the 2015 Society For American Archaeology, and I've put up an extended version of that talk along with associated data files at this website. Just to quickly show what the technique can do, the images below are of a Clovis spearpoint found in Arizona, dating back about 13,500 years. The first image is a regular photograph, and little to no detail of the spearpoint's surface features can be seen. The second image was generated using RTI (plus some extra Photoshop processing), and the surface details are now dramatically clearer. 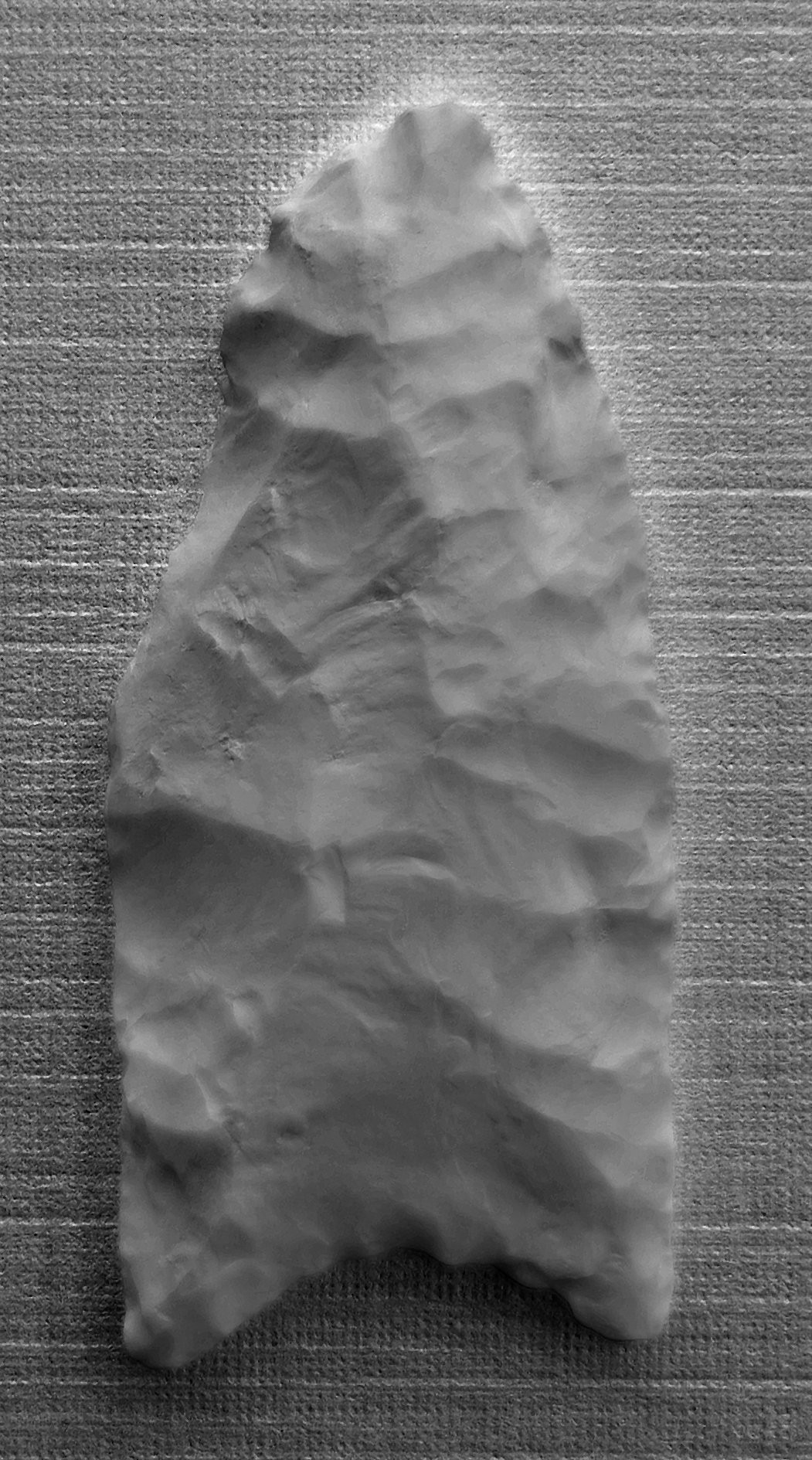 There are two common techniques for generating sets of photos for use in RTI. The manual technique is called Highlight-RTI, and requires manually moving a light source to different angles relative to an object (at a constant distance), and using a shiny reflective ball to determine the lighting angle (see the Cultural Heritage Imaging website for more info on this technique). While this non-automated technique doesn't require much in the way of special equipment, it's slow and cumbersome, and often requires two people to perform. The other technique, Dome-RTI, involves putting your object under a dome with multiple light sources on the inside, and a camera looking down through a hole at the object. An electronic controller turns lights on and off in sequence, and fires the camera shutter in sync with the lights. Because this technique is commonly fully automated, and because the lighting angles are always the same, obtaining the required photoset is much faster and easier with the Dome-RTI technique.

When I first started working with RTI in late 2012, there were no plans available to build such a dome system, only rough descriptions. There were several institutions (Cultural...

This is a really useful and cool ass project! I hope one day soon, to develop my own reflectance spectrometer for microscopy, impressive how much topography detail you are getting here.

Thanks, David! Just followed two of your projects - Raman spectroscopy is a useful too for analyzing some archaeological artifacts, and an inexpensive one would be a great boon.

Hey Leszek, yes it will be a boon if I can get it to work correctly, I'm ordering the 3D parts I designed tomorrow, and beginning phase II. So if this project is successful, it will give me motivation to pursue the reflective microscopy spectrometer.

I mean to decrease the number of pics that need to be captured you could activate different color leds at different locations so you have what would be three normal captured took in one capture.

Not easily as currently designed. There are only 8 column channels and 8 row channels for the LED matrix in this system, for a max of 64 LEDs. Using three separate color LEDs would limit you to a max of 21, which is borderline for good RTI results.  It's theoretically possible to add 16 more column channels (p-channel MOSFET circuits for high-side drivers) to bring you back up to 64 picture sets, but finding space for the additional circuitry, not to mention the added complications in wiring, would be a nightmare. You'd need to buy more expensive RGB LEDs as well, since you'd want to have the light position identical for all three colors.

If you're interested in grayscale pics, or different color channels, I would have thought you could do that easily in any image editing software from the original color pictures. For your application, what's the advantage of shooting in 3 different LED colors and then combining the components later on?

I mean if you use the colors as the separate locations you can take three locations in on capture. And convert the red value into one pic. The green value into another pic and the blue value in to a third pic.

Still not sure what you're trying to achieve with this. How is this different from taking a single color pic and extracting the RGB channels into three separate grayscale pics? You could do this with the color pic taken at any LED lighting angle.

Okay, I think I understand what you're getting at. That won't work, or at the very least won't work very well. RTI looks at the scattered light from an image point on the surface for every lighting angle, and uses the intensity of that scattered light to fit a virtual 2D lighting curve for that point, since scattered light intensity will be a function of the lighting angle. It does that for every point on the surface. If you shot different colors from different locations and combined them into a single image, you'd be averaging out the intensity at that point from three different lighting angles. This would degrade the intensity accuracy, and in turn degrade the accuracy of the derived lighting curve substantially, possibly even fatally.  There are other issues, like having to create software that will preprocess and combine these multiple photos into single images compatible with the current RTI software.

would it be possible to use diffrent colors leds (red green and blue) to allow for taking three of the pictures at once. Then extract each gray scale picture from the different color components of the picture?