My entry for the 2016 Hackaday contest! This regards "Drone Sound" (not UAVs).

The tools in this project operate a 24/7 live stream. Go there, it's worth 1000 words:
https://www.youtube.com/channel/UCBJjDo7AnKcpO5s9hNs1ngg/live

Viewers also direct the sound from within the YouTube chat stream.

Listeners are also participants, influencing the mix by submitting keywords in live chat.

The ultimate goal is an autonomous "Pirate TV Station" mixing sound, image, and "Misinformation Services" into an ongoing avant-garde "collage" of the Internet.

It's probably live now, at https://www.youtube.com/channel/UCBJjDo7AnKcpO5s9hNs1ngg/live

Sounds are selected from the the freesound.org open-source sound community, according to the scheme covered in the following diagram. Other sources such as SoundCloud are in the works. 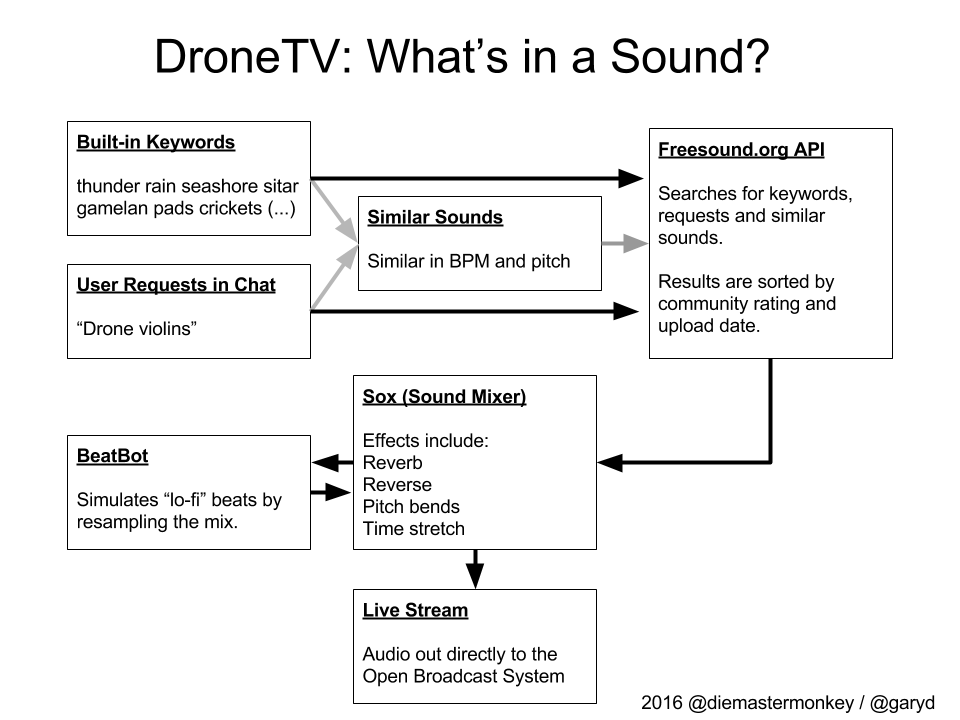 Viewers can add sounds directly from chat! Type "Drone" followed by any single word, right in the chat. An on-cam "DroneBot" flashes his lazer light to indicate he received their requests. Related sounds are added to the mix, over the next 1-3 minutes.

They can also browse freesound.org and find sounds they like, then add them by Sound ID or Author Name. For example:

Intro Video One breaks it all down. Or tries to. You decide:Here in California, a Raspberry Pi single-board Linux computer runs a set of programs that generate DroneTV .

Starting from a list of keywords - and your requests - it chooses sounds from the latest uploads at http://freesound.org. It picks more sounds by following a "trail" of the best ones it finds.

It mutilates, mixes and re-mixes all of this into a gradually-morphing audio landscape of noise and sound. The results are streamed directly, live and in real-time.

U geeky bro? K, you can check out the Early Adopter's Kit (for Linux) available now at https://github.com/diemastermonkey/sonicmonkeypi

I absolutely intend to release all of the components - some just need more clean-up first. Stay tuned, k.

An easy to build, program, modify and use AVR and ESP based Lasertag system for everyone!
Project Owner Contributor

2021 Hackaday Prize
Run this each day for 30 days for motivation to finish your projects.
Project Owner Contributor

Official Hackaday Prize Entry
Automating everything in a room for less than $50.
Project Owner Contributor

I really need to come up with a more clever name for this thing. But at least I don't need a descriptive subtitle here.
Project Owner Contributor