A DIY set-up to listen to, record, and manipulate the electrical tones produced by weakly electric fish!

A specialized electric organ in the weakly electric fish discharges rhythmically to generate a constant electric field. This electric field encapsulates the fish, aiding it in navigation and communication. This organ fires at a steady rate, generally between the range of 250 to 2000 Hz. However, if two fish firing at a similar frequency meet, they will effectively jam each other's signals. To resolve this problem, either fish will shift its discharge frequency -- known as the Jamming Avoidance Response (JAR).

I will develop a DIY set-up to replicate the experiment that discovered the JAR (Watanabe and Takeda 1963) in order to listen to, record, and manipulate the electrical tones of these fish. By taking advantage of the JAR through artificial stimuli, I will have the power to tune the frequencies of each fish. My end product will include a responsive interface to play back these tones -- effectively creating the world's first Electric Fish Piano.

Weakly electric fish have a specialized electric organ, typically located in the tail, that generate electric discharges. These weak bioelectric signals are known as Electric Organ Discharges (EODs), typically at a magnitude of just a few millivolts. These EODs are used to help navigate and communicate with other electric fish. Meanwhile, what separates weakly electric fish from strongly electric fish is the EOD strength -- the EODs of electric eels and rays can reach hundreds of volts which they use to stun prey and protect themselves.

The EOD frequencies of weakly electric fish vary between species and individual fishes -- the majority of which range from 250 Hz to 2000 Hz. When in close contact with another fish emitting a similar frequency, both fish are effectively blinded. Depending on the species, either one or both fish will adjust their EOD frequencies to increase the difference between signals. This behavior, discovered by Watanabe and Takeda in 1963, is known as the Jamming Avoidance Response (JAR). 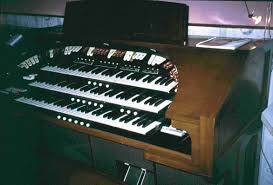 For example, if two fish emit signal frequencies of 400 Hz and 402 Hz, the beat frequency (2 Hz) will cause interference between the fish. In this case, the fish with the lower frequency might push its frequency down to 392 Hz while the other pushes its frequency up to 410 Hz, resulting in a more ideal beat frequency of 18 Hz.

For my project, I plan to replicate and expand upon Akira Watanabe and Kimihisa Takeda's 1963 paper, " The Change of Discharge Frequency by A.C. Stimulus in a Weakly Electric Fish" in a DIY fashion.

Watanabe and Takeda's experiment used a set-up that greatly immobilized the fish. In the diagram below, the fish is sandwiched between blocks of wax (B) and the openings are sealed at either end with cotton (C). Silver stimulating electrode plates (S) and silver wire recording electrodes (R) were used. 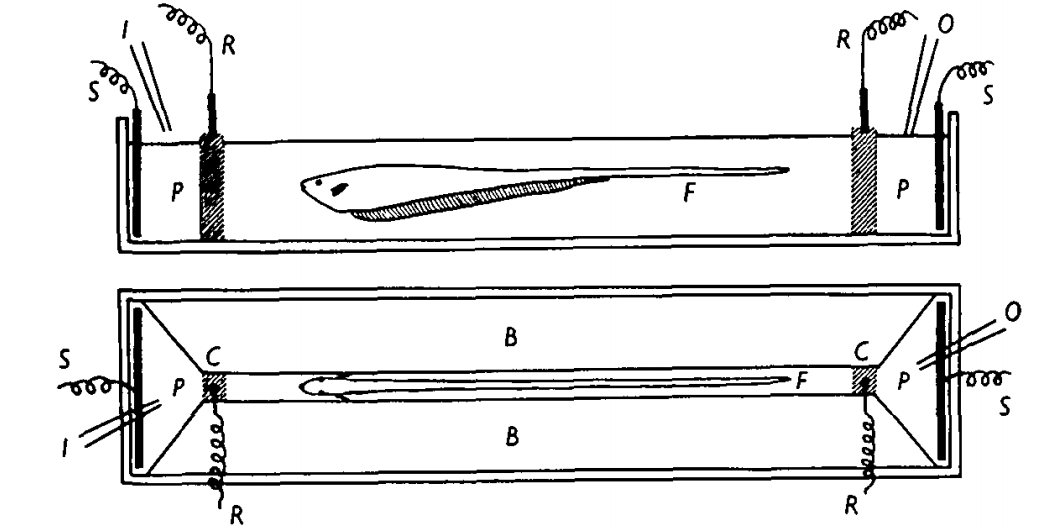 A square-pulse generator was used for stimulation while an oscilloscope was used to visualize the changes in frequency.

With my set-up, I hope to reduce the amount of invasive preparation that goes into monitoring the fish. For example, I will take advantage of an innate behavior of these fish, known as refuge tracking. Weakly electric fish enjoy hiding in small enclosures and it can be difficult to get them out. Even if you were to move their surroundings, they can use their electric sense to follow immediately. For this reason, I will provide PVC pipes as hiding places which will double as recording sites.

I want to replace the expensive equipment that the original researchers had to use. For example, I would like to use an Arduino Zero and Backyard Brains Muscle SpikerShield in place of the signal generator and oscilloscope. If I am successful, the end result should be a challenging and interesting DIY project that anyone can replicate. Neuroscience research is too often stunted by expensive machinery and materials but I want to demonstrate that this does not have to be the case.

I intend to replicate Watanabe and Takeda's experiment using affordable materials and readily accessible equipment such as Arduino and open-source software. I hope to better characterize the Jamming Avoidance Response across various species and to apply this knowledge in a fun and interesting manner -- by creating the world's first Electric Fish Piano.

In this tutorial, we are going to discuss how to make DIY Function Signal Generator using ICL8038
Project Owner Contributor