The dragonfly can capture its prey mid-air with a 95% accuracy rate. What biological equipment does the dragonfly have that allows it to do this amazing feat? To examine this very question, I will be replicating Paloma T. Gonzalez-Bellido's 2012 PNAS paper using DIY open source tools. Gonzalez-Bellido found that there are neurons that run from the dragonfly's compound eyes to its wings that help the dragonfly track and catch its prey with such accuracy. My version of this experiment will control a laser using a laser-light show set up (instead of a expensive custom-made projector) that shines a laser dot (representing a fly) as the stimulus. I will simultaneously be recording on open source bio-amplifiers the activity from these target selective neurons as the dragonflies watches its "prey" move across a screen.

The goal of this experiment is to provide a way for amateur scientists to replicate professional research.

The dragonfly is nature's guided missile. They can use their 360° visual span to swoop down and devour their prey mid-flight with a 95% kill rate. They can individually manipulate the trajectory of each wing to switch directions rapidly in mid-flight. Ant-Man? Spider-Man? They really should have Dragonfly-Man. To illustrate this insect’s abilities, I invite you to google “dragonfly catching fly slow motion video,” or something of that sort. You will be amazed.

Despite their stunning predatory accuracy, dragonflies are deceptively simple creatures. 300 million years ago, they were still buzzing around like little killer drones. The source of the accuracy of dragonflies is also deceptively simple. Eight pairs of neurons (called TSDNs for target selective descending neurons) that run from the dragonfly’s visual system to their flight center, help them encode the direction of their target (their prey) and track it with such incredible accuracy. Through examination of this surprisingly simple yet adept insect, it is my hope that my research can be used for the purpose of furthering technology, such as building a faster, more accurate helicopter, and education, by providing a cheap, DIY method of producing a professional experiment.

In my project, I will be replicating and extending Paloma Gonzalez- Bellido’s 2012 paper, “Eight pairs of descending visual neurons in the dragonfly give wing motor centers accurate population vector of prey direction.” This paper studies the relationship between eight pairs of neurons and the dragonfly’s predatory abilities. The results of the paper show that these neurons, aptly named the target-selective descending neurons (TSDNs), encode a population vector that is strongly correlated with the position of the target (the fly). This means that these eight pairs of neurons are direction-oriented, or that they have a preferred direction and show more activity when their direction is favored.

As previously mentioned, this project will be replicating a academic paper, "Eight pairs of descending visual in the dragonfly give wing motor centers accurate population vector of prey direction." In this paper, Gonzalez-Bellido used a modified projector to shine a black dot (representing prey) on a curved screen and measured the neural activity of the dragonfly. Below is Gonzalez- Bellido's set up: 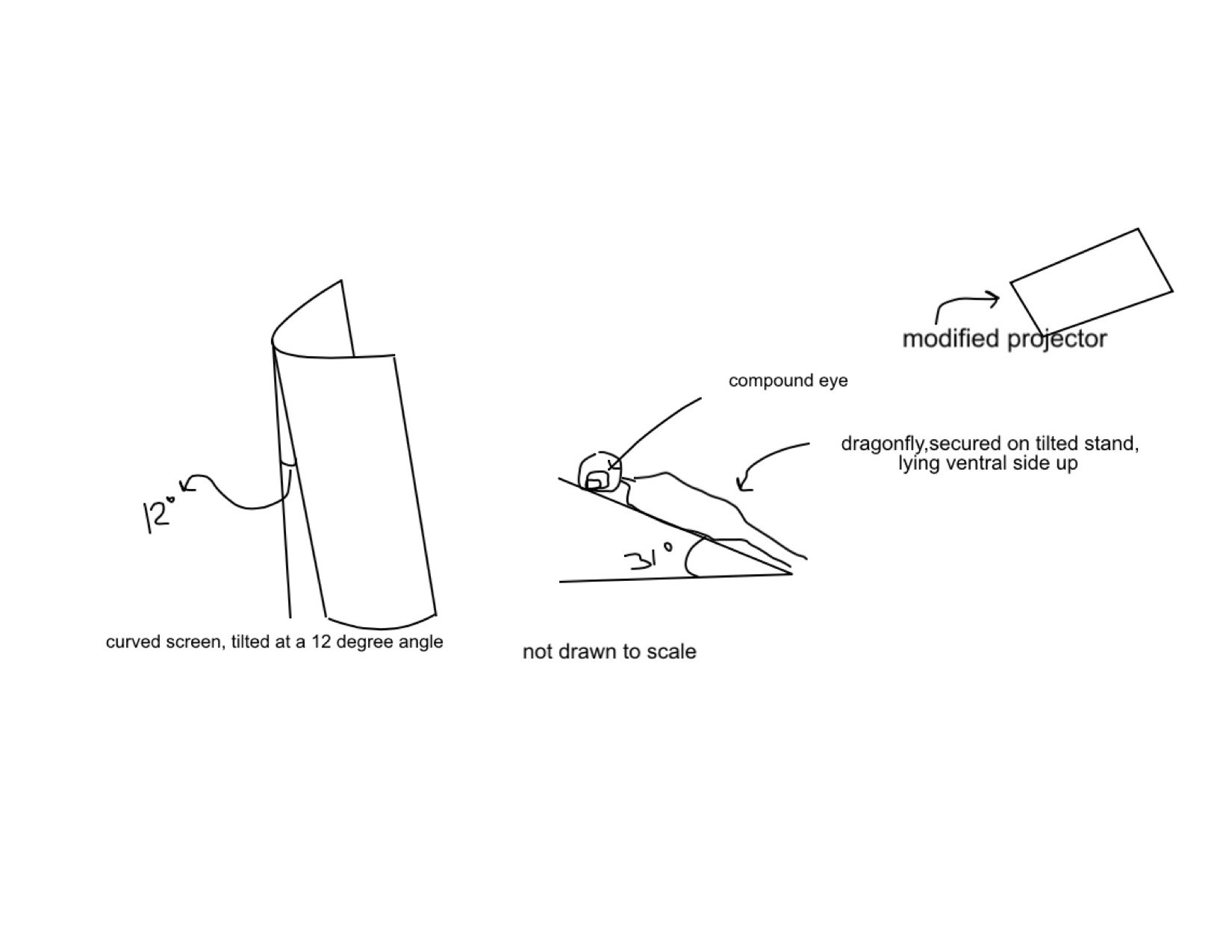 The set-up in the original 2012 paper

In my set up I will use a laser light show system instead of an expensive modified projector. The laser show is very replicable because it is cheap and made with materials that most makers have around. My laser light show includes two servos and an Arduino Uno. These servos have mirrors attached to them. As different voltages pass through these galvos, the mirror will change position. The two servos, one moving in the x direction and one in the y, will change the position of the laser. The laser and the two servos are connected to an Arduino Uno, making the position of the laser both reliably and easily manipulated through Arduino software. Furthermore, a Spikerbox (Backyard Brains) is connected to two electrodes (one in the dragonfly's abdomen and acting as a ground, and one in the TSDN) to measure the neural activity of the target neurons, and displaying it on an laptop. This set-up is pictured below: 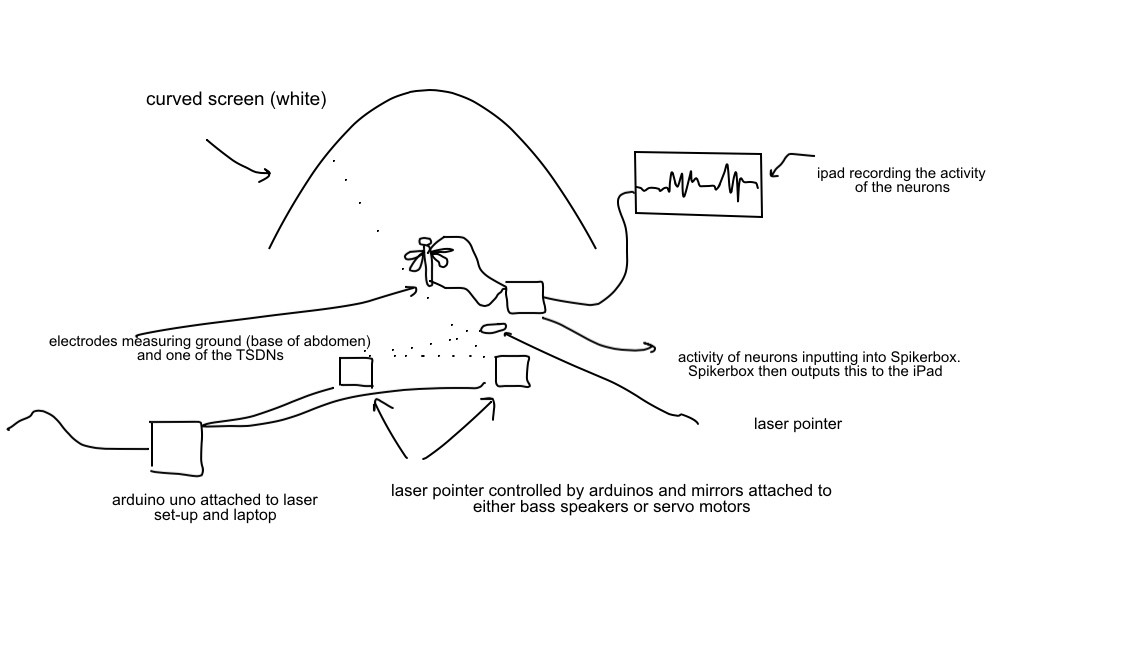 If all works, the essential goal of my experiment is to provide a way for anyone to replicate professional laboratory neuroscience!

awsome project, learned something about dragonflies I did not previously know. Awsome creatures.

Super cool project! Watching dragonflies hunt is a ton of fun. Do you know the BYB folks? If not, you should drop in on them and show off your project--they're HQ'd in Ann Arbor.

Thank you! Yeah, it's super fun. I do know them- I'm actually an intern there right now!

Official Hackaday Prize Entry
To create a robotic arm and hand, controlled by a user input, and powered by a solar collector.
Project Owner Contributor

An electronic excise and a table piece made for a themed party. A basic exercise in physical input-output using a servo logic.
Project Owner Contributor

In which our hero adds a servo-driven shutter to his 3D printed pinhole cameras, & remote and programmable control via Arduino and friends.
Project Owner Contributor