Well the Grbl Firmware for the Arduino is great. It's so good that why bother writing your own? Other than for the hell of it!

If you have one of these then you will need Grbl to run it. 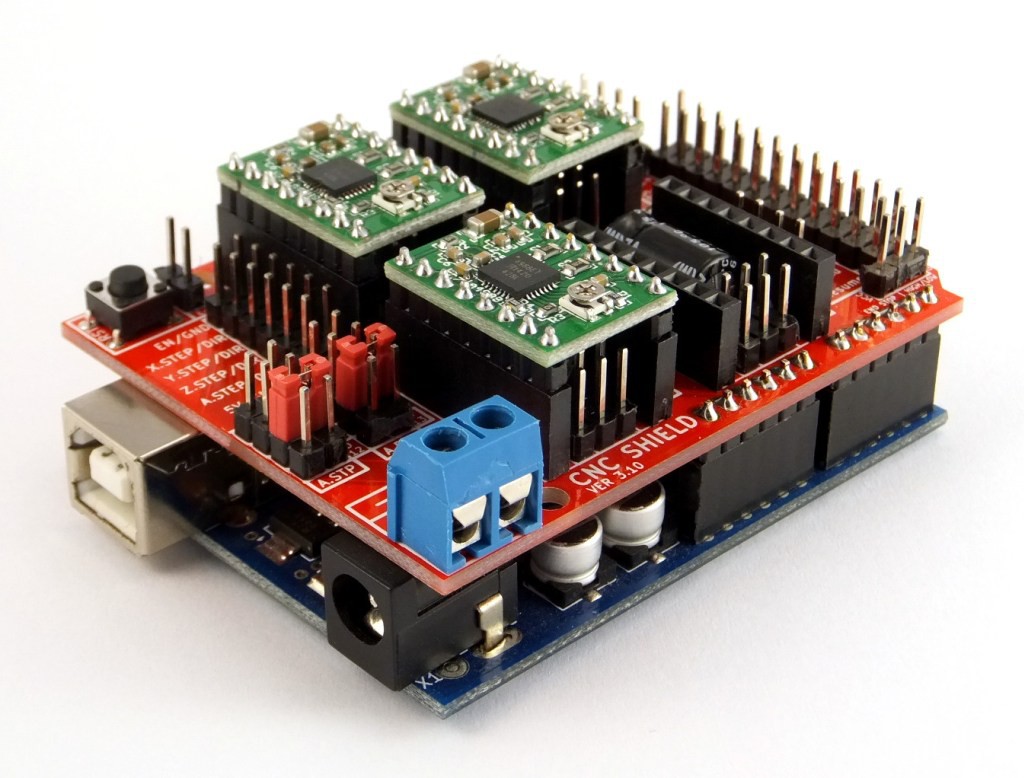 The above image came from Protoneer so can I suggest having a look at their site.

This project "Not Grbl" replaces the great Grbl firmware with an inferior partially compatible version.

Works with the Arduino serial window (for testing only).

This project uses the "Blink without delay" approach to control the stepper motors.

This avoids the use of hardware specific timer (for interrupts).

In exchange the code is awkward as it has to "pass through" as fast as possible.

Basically code processes each character as it is received.

// Some LED flasshing code to show it is busy

tokeniseGCode(); // Tokenise a character at a time from the serial stream

parseGCode(); // Parse the code on end of line received

More about the code later.

But G Code Sender and Grbl Controller wait for an "ok" from "Not Grbl" before sending the next command.

Actually Grbl Controller sends 10 commands before waiting for an "ok" which is no problem.

So "Not Grbl" will reply with an "ok" after every command is sent and interpreted (but usually before the command is executed".

Steppers have a maximum under load (pulse per second (pps) or speed that they can start and stop from without losing steps. For most steppers this is in the order of 500 pps. Not Grbl at the beginning of a movement will ramp up from 500 pps to the specified speed and ramp down to 500 pps before the end of the movement.

The ramps will slow the average speed of short segments so filtering out of these short segments from the gCode will help a lot (particularly with laser over burning).

On my Arduino UNO the "pass through" frequency varied from 12kHz (idle) down to about 8kHz (working). This implies a maximum pulse rate of 8kHz (or 4800mm/min on my 100 steps per MM machine). In reality 2400 mm/min would be a practical maximum.

I don't think many steppers will work to 8kHz anyway.

Basically immediate codes (providing they are not in-bedded in comment fields) will executed after the Enter key.

Nothing stopping you from using the default tool (i.e. "T1") and using the M3/M5 codes to turn on/off the laser.

The spindle control command (S) is recognised but not implemented.

The current hardware mapping models D2-D8 and D12 at present (see below): 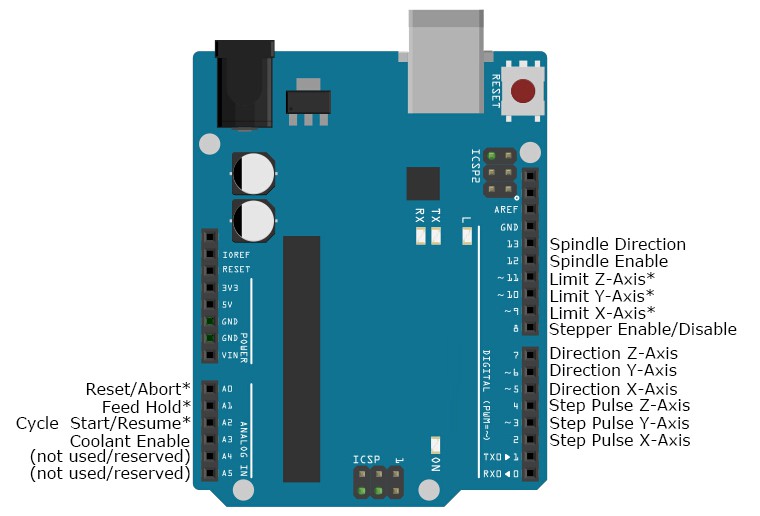 The above image came from Protoneer so can I suggest having a look at their site.

The code has been tested with a Chinese Laser Engrave and works within expectations.

You may also want to have a look at my GCode Cleaner. It strips out as many short segments as you find tolerable. I use it for may laser to speed things up and to stop burning.
AlanX

HEy, Thats great. I am rather surprised that someone actually looked at the code!

I modified your code to allow for a servo instead of a spindle. Works great on my CopperScribe!

The 2017 Hackaday Prize
Arduino-based gag thing, when you point it at someone, it makes noise and flashes some LEDs.
Project Owner Contributor

Need a turret but the not impressed by the servo type. Perhaps a stepper motor version may be better.
Project Owner Contributor