YET Another IR Vein Detector

The goal of this project is not to invent the wheel, but instead try apply optical filters and image processing to achieve the goal.

This project is aimed to achieve what the title describes. Create a cheap way to detect veins for complex patients wich are hard to canalize.
I work in a hospital and doctors complain about how hard some patients, are to canalize, obese for example, or some patients whos veins are hard to find, thus, knowing there are not_so_cheap devices that do the task, wondering if there is a cheap way to do it.
My goal is to use not_so_expensive hardware and provide a reliable good "vein map" to let them know where are the veins.

The project is based on the idea to create a cheap way to map veins on medical patients in order to canalize them. Knowing there are devices that already do the task, the goal is to achieve it in a cheaper way.

In order to do so, the idea is to use a hacked webcam, IR band pass filter, a few IR wide angle leds, and a RaspberryPi (or similar) to do image processing and a display to show whats intended.

The idea is based on light absorption.

We illuminate the target with IR Light (around 850nm), that is what IR led's job.

We need a spectrum of light which if highly permeable for human tissue, but still is absorbed by blood and its components.

Here is were near-IR light comes. 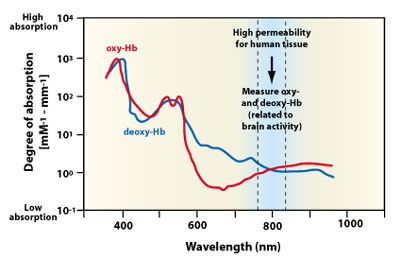 Even though near-IR isn't its optimal absorption wavelenght, it is highly pearmeable for human tissue.

To achieve the image capturing, we have to modify a digital camera sensor. In this case, we use a webcam (future image proccesing porpouse).

We need to remove the IR filter.

By default, a digital camera has an IR filter to avoid IR light reach the light sensor.

I bought a few webcams, diferent brands and quality, some of them had the IR filter attached to the sensor, being nearly impossible to remove without damagin the sensor.

Others, had a fixed focus, so removing the IR filter lead to a focusless image.

I finally got one wich had an easy-to-remove IR filter, adjustable focus lens and acceptable 720p quality.

Surfing the Web I found several brands an models, but living in Argentina means it is not that easy to find -nor afford- most of them. So I had to work with things that were reacheable - and affordable.

I found a Genius Facecam 1000x HD, wich it was compatible with the linux kernel 2.6 and newer. This was very important because the idea is to use it with a Raspberry Pi running Raspbian. And its very affordable.

Now that we have an "IR Light Sensor" we need to light it up.

I tried common remote IR but wasn't getting a clear image. Even increasing the number of leds.

In order to turn them on, I used a DC DC Step Down power supply, being set at 4,85V and calculated 22ohm resistor in order to get around 220mA current per led.

I have to admit, I was looking to get a clear image with 100mA, but in practice, I adjusted the power supply with more current until I had a clear enough image, without burning the leds nor the image.

I use a band pass IR optical filter. The idea is to acquire only IR light. 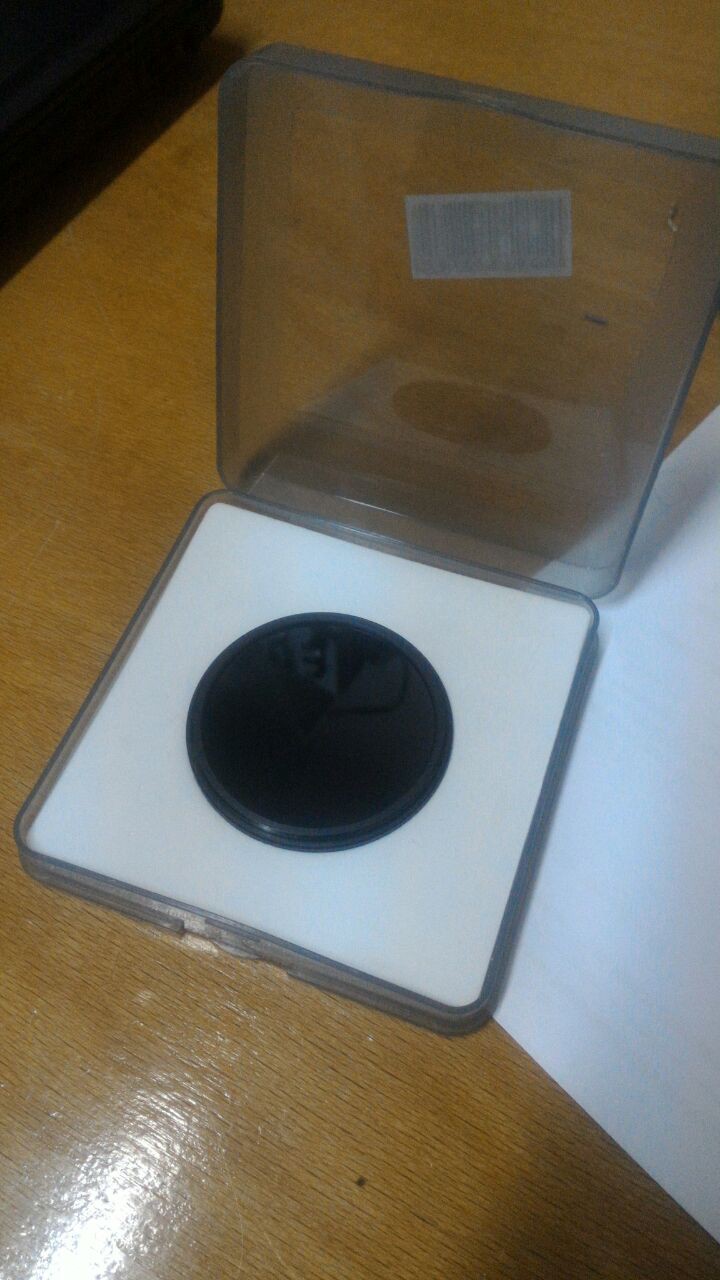 The idea is to avoid interference from artificial light sources, this also helps to equalize reflection and absorption linked to skin color.

Here is the first prototype: 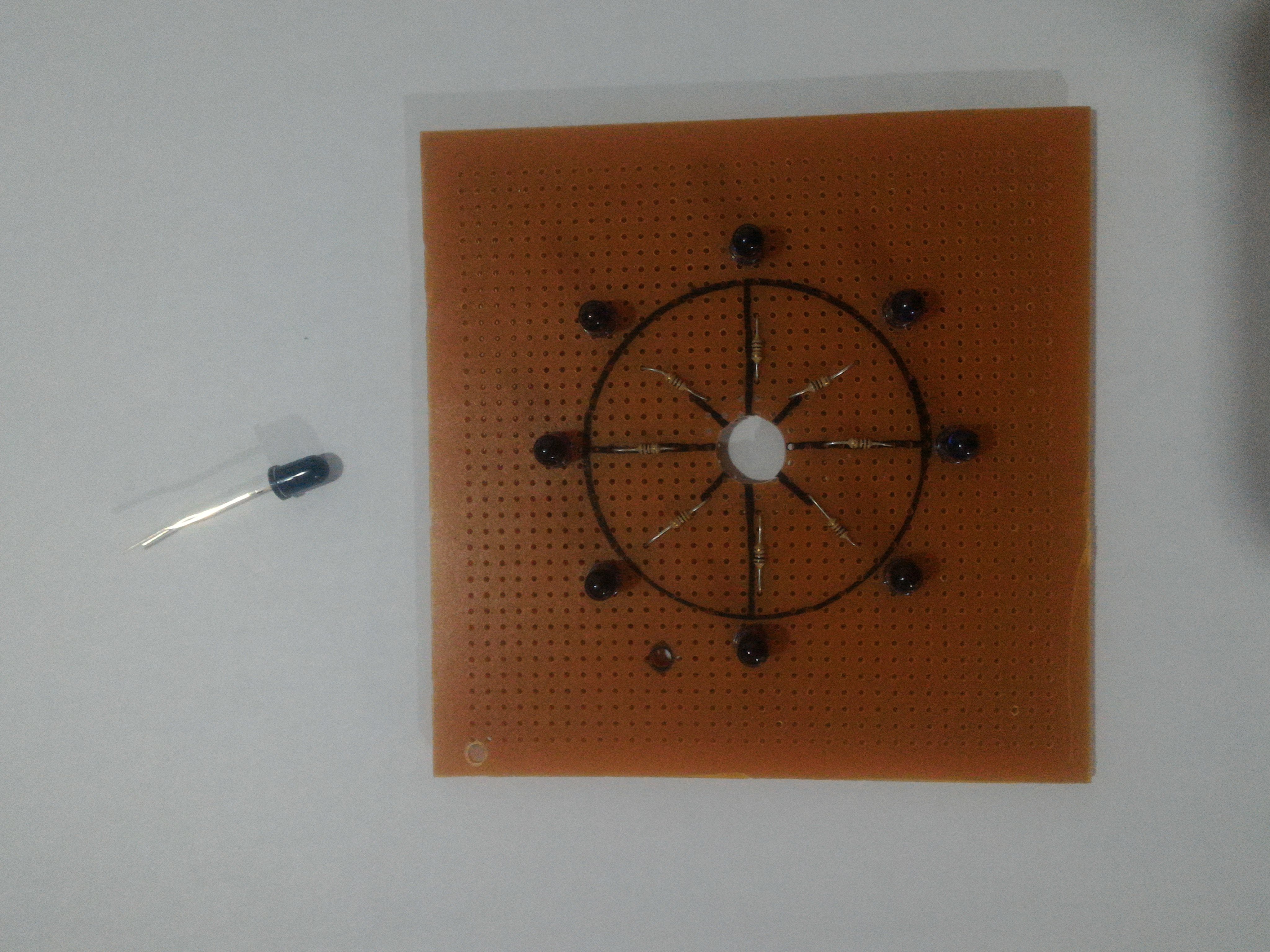 As you can see, I used normal remote IR leds.

But they don't have enough power for the porpouse. 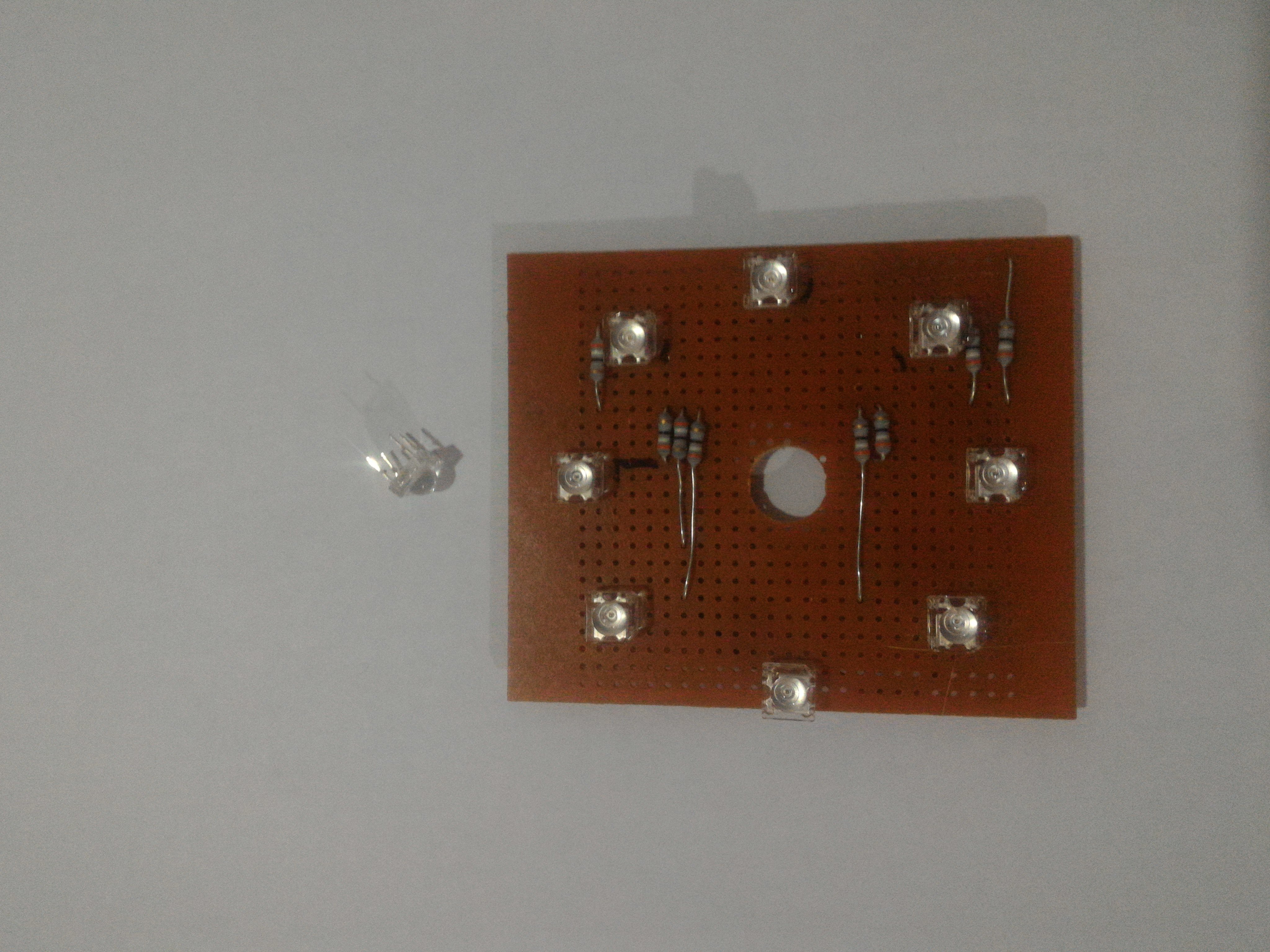 I used more powerful IR leds, 8 of them with 39ohm 1W resistor. But, now image was "burnt", too much IR light on target.

So, being reative, I decided to put some tape until I found 5 was the magic number.

Since resistors were overheating, decided to use some with more heat dissipation.

Here is the current prototype. 5 IR Leds, with 33ohm 3W resistors. This leds require bigger amounts of current, therefore, overheating resistors is something to consider. 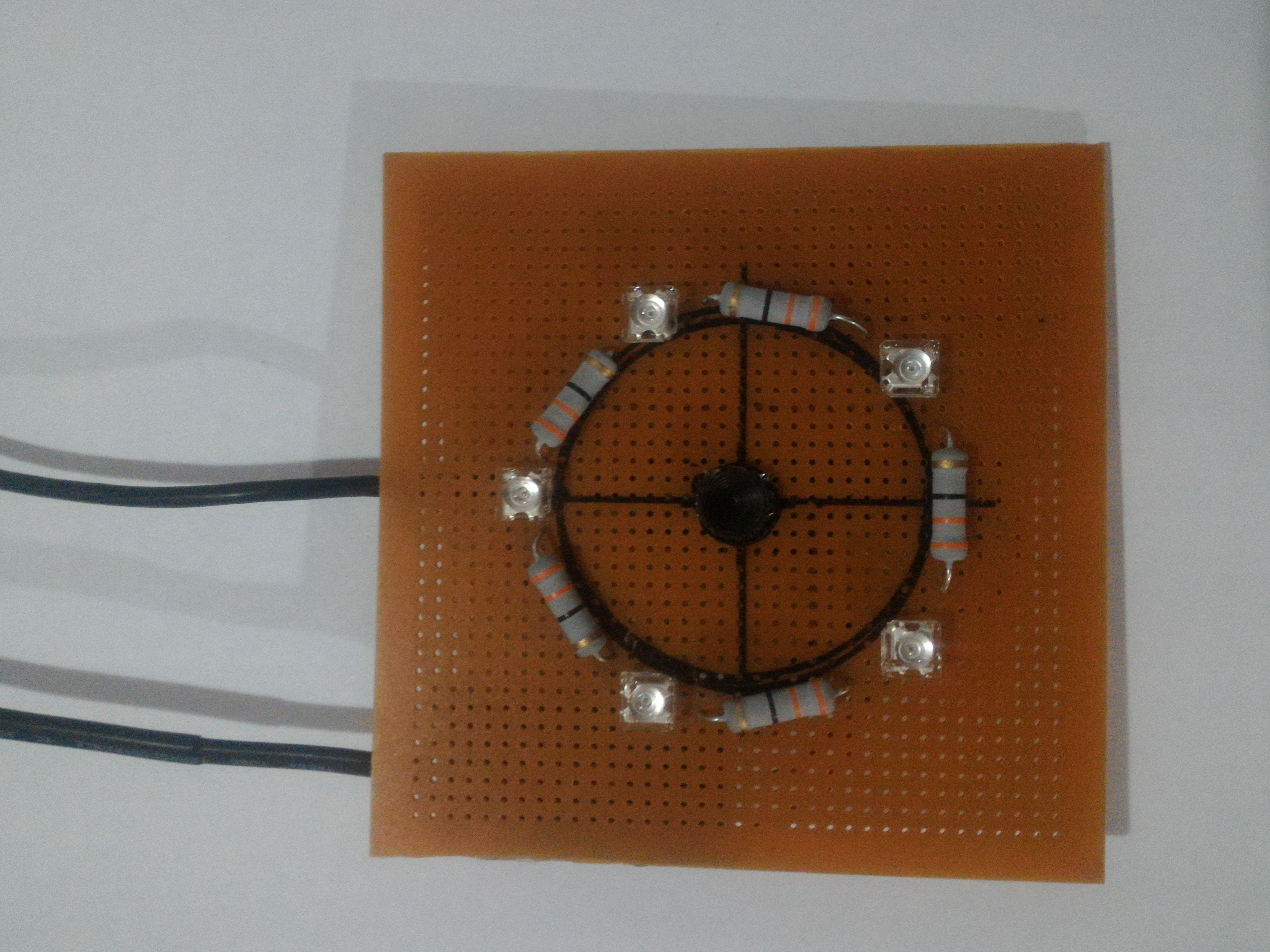 On the back, there is the webcam and the DC DC StepDown power supply. 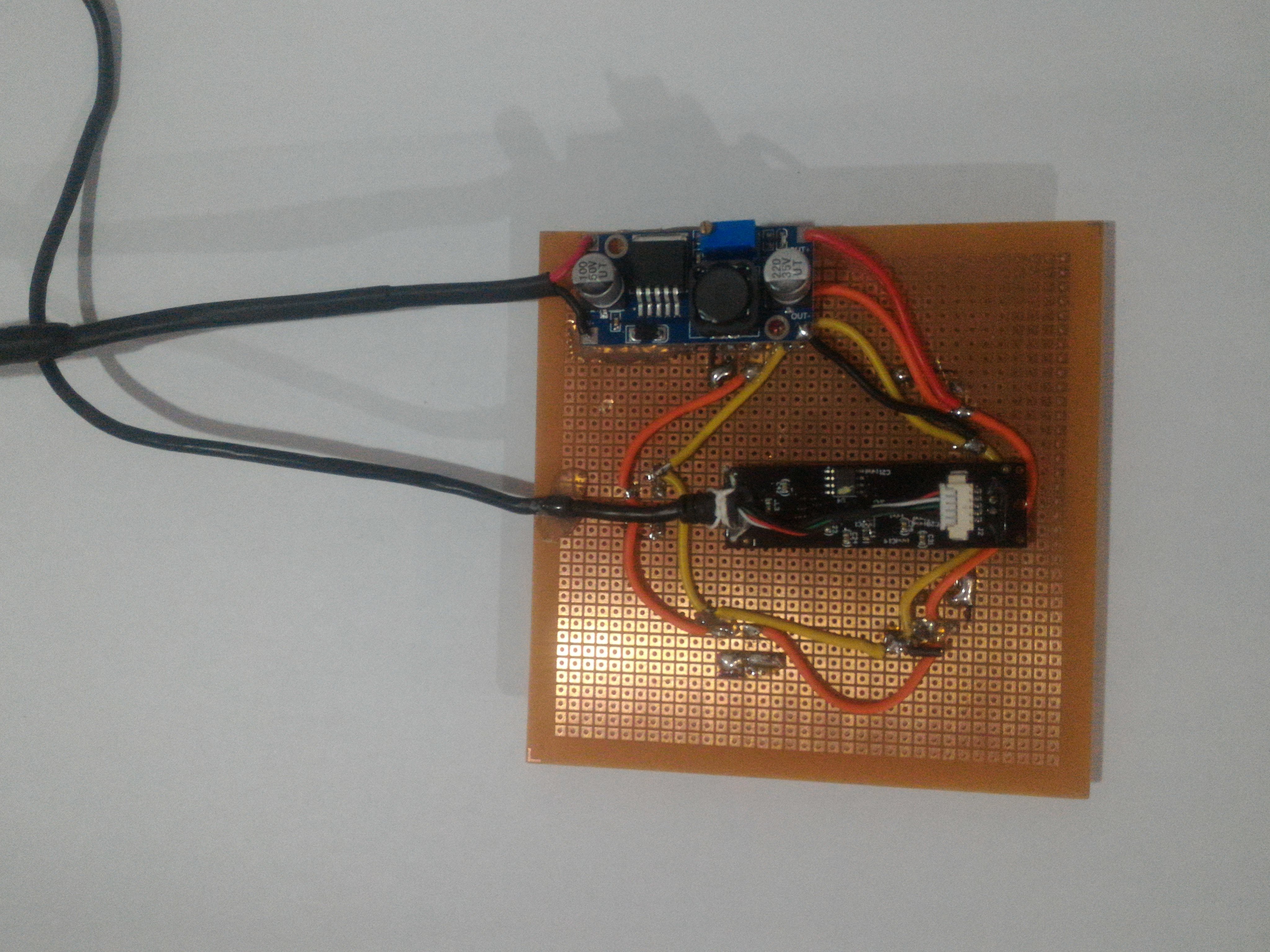 And here, how it looks with the optical filter. 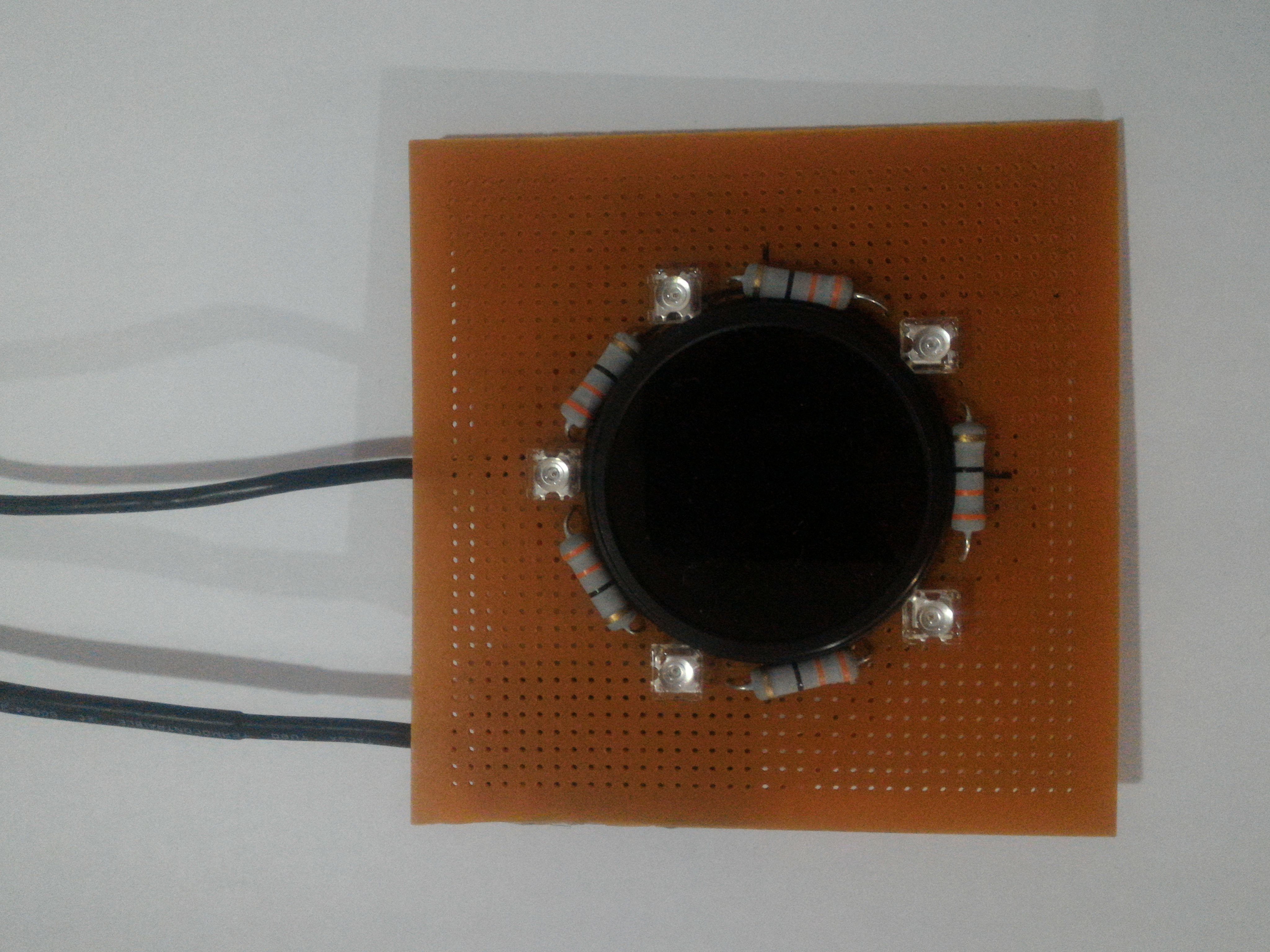 Of course, it is black to visible light, but it is permeable to IR wavelength.

Now that I got a clear "enough" image, it time to process it. 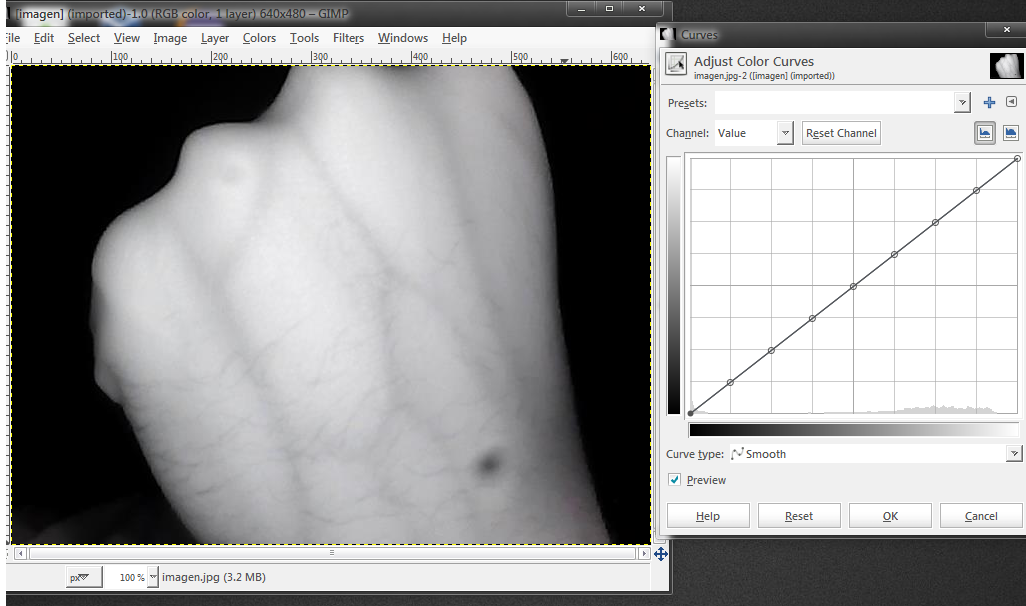 As you can see, we have a sort of "black and white" picture. Even though it is the way the camera perceives IR light.

In order to process the image, I follow a few steps.

For this, I use Python (compatible with the RaspberryPi 's Raspbian OS), and OpenCV library.

The script acquires a frame from the webcam, process it, and shows it.

The idea is to process it and display it in order to have an idea where...

how image processing is done. Can anyone explain in detail

Any chance to post parameters of the LEDs ? maybe a brand and model? I would like to build this project myself, already have camera and ir filter, but need LEDs specs, where to buy? I have barely visible veins and would like to help nurses find my veins so I could reduce the pain when taking blood samples.

hi my friend i am too an biomedical eng ... and i have done the same idea ... but i want to project the image on the hand ...

Hi narf, this is a great project. I have a couple of genius Facecam 1000s which I'd like to hack. Before I climb into the cameras and possible destroy them in the process, do you have any tips to getting the case apart to remove the IR filters?

great work i am working in the same method but the leds source is under the hand... i use 48 leds and i have great image ...  the question is whats the different if i dont use ir band pass filter and can i use matlab insted of python ???

You should  2 or 3 of the IR-LEDs in series, they normally have a forward voltage of around 1,2V. So if you drive them single on 4,85V you waste 3/4 of the power in the resistors. No wonder they get hot.

Very successful work. Congratulations. Can a different camera be used? How should camera features be? And is the camera shooting live? Or is it just a picture?

Thank you. Yes, there is definitely no need to use a special camera, I selected that one, because I tried with a few, but was the only one available which did not have the IR filter attached to the CCD. You can use any camera you can detach the IR filter from. It took a while to get access to a Rpi NOIR 5Mpx camera. Now I am "playing with that one". It has auto focus, more definition and viedo stream is faster than a USB webcam. Will update as soon as I get something "show-able" (made up word... ).

And as far as the camera shooting, yes, it it video stream feedback. But its smoothness like I like to call it, or FPS more technically, relays on the hardware that processes the images. At first I tested it on my laptop, and worked pretty good, but when it runs on the Rpi 3 B, it gets laggy. Because of the software filtering and image processing, if the image is too big, it takes more time to complete the instructions, and video stream gets laggy, so I am working on a more efficient way to process the images.

Soon there will be an update, with the new camera, optical filter, and everything attached to the Rpi3. Feel free to ask any question, suggestions or advices you want.

Would not it be more useful to do it over the mobile application? Or using arduino. Try with TTL Serial Camera? Maybe there are no filters in the small CMOS cameras.

@narf Very cool and useful application. You may find something that helps with filtering and image improvement in scikit-image (python library). There is a very good tutorial on pyvideo.org from SciPy 2014.

Carol, thank you. Definetly will try it out and update the project with the results!!

Project is not complete.

Video and Pictures eventually will be updated.