DepthIR: Object detection for the blind

DepthIR is a really cheap attachment for hands (and possibly 2 similar foot attachments) to inform a blind person about the distance, size and color of objects to grasp or walk around. Each finger measures the distance to the nearest object and vibrates that finger to show roughly how far away it is. For example, a blind person could sweep their hand across and quickly sense where their dinner table is, and sweep again to sense where their cup and bowl are, without accidentally putting their fingers into their meal!

90% of the world's blind people are in developing countries, so my main goal was to make the device useful but still affordable in the 3rd world. It's designed to help people in need, rather than to buy me a Ferrari, so the whole project is non-profit and is open-source hardware & software. If the Chinese black-market makes replicas of my blind assistance device, their devices will still be helping blind people, so I'm happy to help them!

As mentioned in my "Motivation for the project" log entry, there are already several projects that measure distance to objects for blind people using Ultrasonic sensors, but as an experienced robotics engineer, I believe ultrasonic sensors are way too unreliable. Meanwhile, there are various university labs that have tackled the same problem using highly complex 3D camera systems with powerful computers, costing many thousands of dollars just in parts. But according to the World Health Organisation, Approximately 90% of visually impaired people live in developing countries. So I'm trying to build an extremely simple and cheap Infrared-based distance measuring device for the blind, that is both good enough for real use in the First World and cheap enough for the Third World.

Infrared can be used for many purposes, and when measuring the distance to an object by transmitting some IR light and detecting the amount of IR light that was reflected back, it's usually much more reliable than Ultrasonic sensors. The standard way to measure distances of 1 or 2 feet using Infrared is to use one of Sharp's GP2Y0 analog distance sensors, such as the GP2Y0A21YK at Sparkfun for $14. That's because these devices by Sharp are quite reliable & trusted, but also because there's no cheaper alternatives! The Sharp distance sensors are similar size & price as Ultrasonic sensors and have slow data rates, but they haven't changed in decades and don't seem to have any commercial competitors, so I decided to see if I could make a similar IR distance sensor using the ultra-low-cost & ultra-small components available today. I've built my own IR distance sensors for robots in the past, so I knew it was certainly possible, I just wasn't sure if it can be done really cheap and still achieve long range and good reliability. Most IR distance sensors are only designed for a few centimetres range, whereas I want atleast 50cm range in order to allow a blind person to detect objects in front of them. My suspicion was that if designed well, Infrared distance sensors can be noticeably smaller & faster than Ultrasonic sensors and also cheaper than even the cheapest Ultrasonic sensors on AliExpress!

First, let's quickly list the different parts of an Infrared ("IR") system, using your TV remote as an example. Your TV remote has an "IR emitter" LED that sends out a narrow beam of invisible IR light, and your TV has an "IR photo-sensitive receiver" that measures the amount of IR light shining into it.

As mentioned in my "Choice of Infrared distance detection method" log entry, rather than use more complex distance measuring techniques like Time-Of-Flight / LIDAR or Projected light, I decided to simply use reflected light intensity as a way to measure distance to the nearest object. And instead of using the standard Sharp analog IR sensor, I'll be making my own version that is much cheaper, faster, longer-range & smaller. 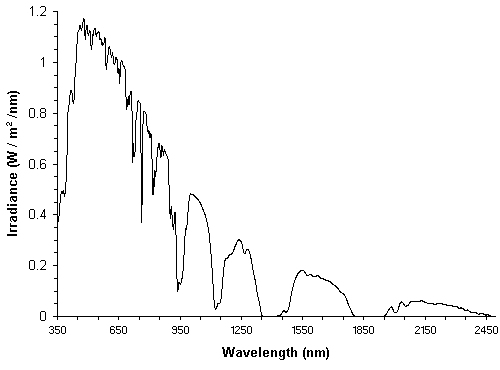 Looking at the sea-level sunlight spectrum shown in the figure above, we see that sunlight doesn't contain...

Use a webcam, a rpi3 and Deep Learning. That will surpass any system.

That option certainly has a lot of potential, especially for things like object recognition with speech synthesis, but a Raspberry Pi 3 based computer vision solution won't fit on your hand or cost under $20 or have battery life of more than an hour. Whereas an Arduino with custom Infrared based solution can :-)

I agree, but this is a prototype right? You will find smaller processors later. An Intel Edison is the size of an arduino nano and very powerful + built-in wireless communication.

Yeah true :-) But an Intel Edison would be around 10x slower than a RPi 3 and have similar battery life of RPi of around 1 hour for a small battery, whether it's a prototype or a production system. So the options are either to build a $20 IR device that fits on your hand and has days or weeks of battery life, or build a complex $150 computer vision device that's connected to the computer & battery pack in your pocket to give you a full day of battery. My main area of expertise is actually in mobile computer vision, so I am actually planning on building such a device eventually, but I've postponed it for a few more years for when ARM dev boards will be more battery efficient and cheaper. In 5 years time a microcontroller will still be fairly similar to current microcontrollers, but ARM dev boards will be much more battery efficient and cheaper and smaller :-)

Clipper - A Clip on Tuner for Musical Instruments

Numerous studies have shown that flickering, Although high frequency and then totally invisible, It can also cause headaches, eyestrain...
Project Owner Contributor