Here's a video of the project:

Here is a diagram of the main components: 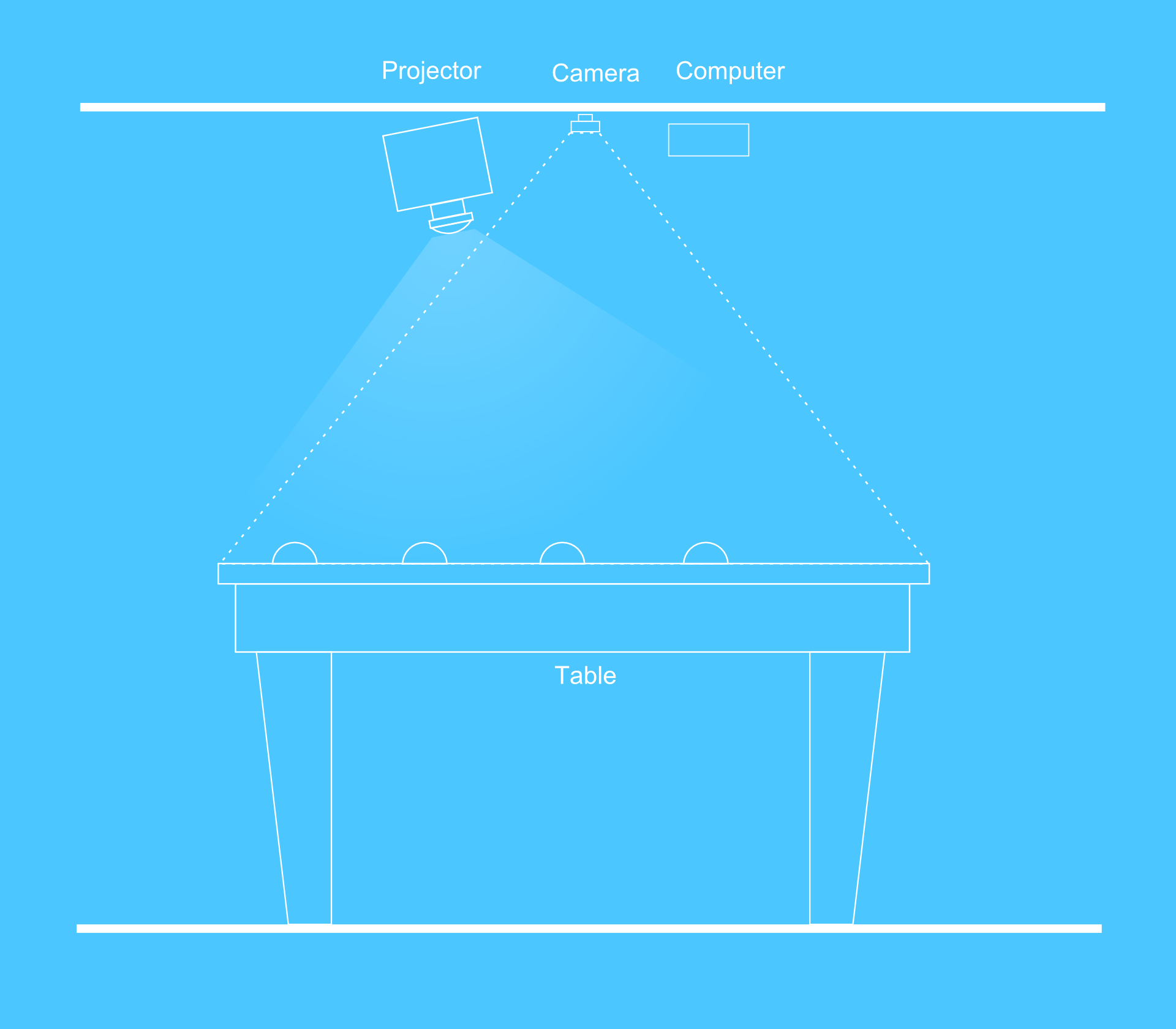 The system is comprised by a computer, a webcam and a video projector. The camera is placed on the ceiling, above the pool table. It's very important that the camera is positioned parallel to the ground, at the center of the table, so the captured image won't be distorted.

The projector is placed next to the camera. It won't be parallel to the table, but we can fix the projection distortion later, using either the projector own trapezoid corrections or even using homography.

The computer can be anywhere in the room, but it's easy if its near the camera. Some cameras doesn't work with long connection cables. The smaller the computer, the better to fix it on the ceiling. But I'm assuming a Raspberry Pi doesn't have the processing resources necessary for a smooth video processing.

This software is based on the open-source (BSD) computer vision library OpenCV. There are parts of the code that rely on FMOD library for sound. FMOD is free for non-commercial uses, which is the case of this project. But these sound functions of Cassapa are not mandatory, and can be removed if you're not ok on using non-open-source code.

Regarding the problem with the ceiling height, which I also encountered: Check out the Acer S1370WHN. It creates an Image with a width of 2 Meters upon 1 Meter distance!

If you need any further help, we maybe could work together on this!

Your link to the Github repo appears to be broken.

Jasmine Brackett wrote 08/06/2014 at 00:15 • point
Hello Alex, now is the time to add a few more details to your project to give it the best chance of going through to the next round of The Hackaday Prize.

Your off to a good start as you've got the video, the video link, the system design document, and a link to your source code (I'd move it from the build instructions and put it with your video link).

By August 20th, you need to to make sure you have 4 Project logs, and remember to mention any licenses or permissions needed for your project. For example, if you are using software libraries you need to document that information.

Adam Fabio wrote 07/29/2014 at 05:54 • point
As someone who grew up playing pool, I have to say this is an awesome project! Thanks for entering Cassapa in The Hackaday Prize! One of the great things about structured projection is that it can be an incredible interactive tutor. I think you've captured that here.
Keep the updates rolling in, and don't forget about the videos as well! Good luck!

By gimbaling the camera view instead of the actual cameras, orientational error and resulting motion sickness are greatly diminished.
Project Owner Contributor