I'd had the idea for a graphical flip clock for a while (run-length encode half-digit foreground/background data, draw every n-th row to get the look of a tipped split flap) but it was on the back burner. Then I found a pretty nice 3.5” 320x480 colour LCD (ILI948x driver) on a local market website. After implementing the clock I found I had room in the sketch and was inspired by the colourfulness of the LCD, so slapped in some other faces based on code from earlier projects; a cubist clock, a triangle clock and a pong clock.
The LCD is a shield socketed onto a blank intermediate shield with RTC and push-buttons directly attached. The intermediate shield is socketed to a Uno, creating a quite thick "sandwich".

I went with an ultra minimal enclosure, front and back clear acrylic plates.

The main clock display is the day, date and month in smallish flip-style digits across the top of the LCD (landscape mode).  The time is in big digits across the bottom. As a bonus, across the middle there’s a blinking/flipping colon and also a coloured digit indicating the number of days until I need to put out either the rubbish bin (red) or the recycling (yellow). It’s alternate weeks and I keep forgetting (this display is optional).

The LCD inspired me to add in some additional clock “faces”:

The LCD colours are appealing, so I experiment with coloured cubes. The look is based on this font www.dafont.com/kubics-rube.font

There was a little program memory left, so I squeezed in a very simple Pong Clock, again using code from an earlier project.

The sketch uses all but around 100 bytes of the Uno’s program storage space.

The clocks use a simple automatic DLS adjustment class which takes a table of start/end dates.

The LCD shield uses an ILI948x driver.  As always, the trick is finding some code which successfully initialises the display (including orientation).  The only other interaction is a) setting a “window” on the screen and b) filling it with colour data.

The viewing angle is fairly important, from the wrong angle the display is quite washed out.

There was a lot of software in this project so when the time came to go from prototype to final assembly I decided to go to the other extreme and keep it as simple and minimalistic.   It starts with a blank stackable shield. This gave me access to the pins I needed for the RTC and the two switches. I mounted all directly to it. The LCD shield goes on top, and Uno underneath to create a quite thick sandwich.  This sandwich would actually have been enough, since it stands up OK. But I decided to add some protection in the form of two laser-cut clear acrylic plates. The Uno is attached to the back plate. The front plate is attached to the back plate with stacks of standoffs.

There is no backlight control and the thing is quite bright. To keep the build simple, there’s no LDR to sense ambient light and dim the display. Instead, there’s a bit of a hack in the sketch to optionally blank it between selected hard-coded hours (eg 7pm-7am). All that does is make the display black, but there’s still a glow - the copper tape is an attempt to reduce this light leakage.  I plan a separate project with an LDR and a relay…

Photographing the screen was tricky. I modified the sketch to optionally send the LCD commands and data out the serial port.  I wrote a small Python program to read in a file of the serial output and re-create the image as a PNG. 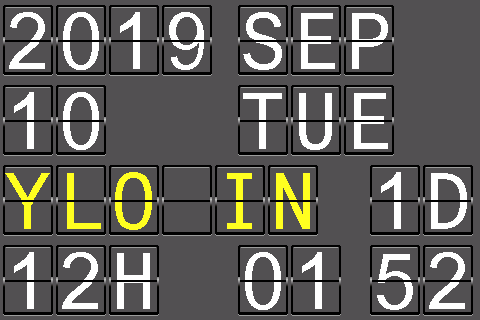 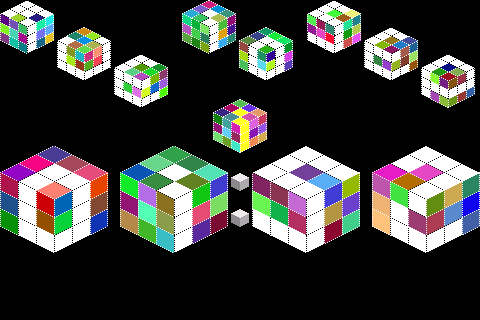 Turns the device off in the evening when the room gets dark, then back on in the morning when it's light!

Thanks Mark for you remarks, you saved me a standing amount of frustration. Never mind about gyros, they're for other project... And thanks for the heads up about DST.  I owe you a beer! Now I'm waiting my hardware. For now I have a beautiful face is iddling 12:00.Let's how it comes with the DS 3231..Last subject, isit possible to change the black and white face for something like a deep blue and white? Your photo, and mine by the way, shows blue but it's black and white. Enough form today. Cheers, man!

The blueness is just a artifact of the photo, the lighting and the viewing angle.  You should be able to play around with colours by changing the constants in Leaves.h but some hard-coded colours (like black & white) may've snuck in there. Easy enough to change.

I took a photo as  blue/white effect too. As you say, too much backlight. My "middle board ", the red one, will arrive this week. Is is true that you soldered the DS3231 and brought it to the 3.3v and Ground and then all the remaining wires as per your photo?

I'm not getting a "reply" button on your most recent post so I'll have to use this.

I don't know what your DS3231 breakout needs but it's probably 5V not 3.3V.  Check its pin labels.  It's not clear on my photo, I think I may have done the 5V line on the underside.  But also look at Pins.h which has an ASCII schematic.

Thanks, indeed is a 5v (datasheet confirms)  and almost certain you pinched 5v under the "red" board.I just received a protoboard, kind of different of yours but I'll follow your Pins.h to guide my clock.. WIsh me luck,

Good luck. I checked: the proto-board I used distributes 5V and Gnd, no need for a wire underneath the board to power the RTC

Other question: is there in the code anywhere the possibility to activate and indicate the actually  number of week of the year instead of the rubbish bin indication. Your comment : " It’s alternate weeks and I keep forgetting (this display is optional)"

There is no code but there is certainly the possibility to change the bin indicator to the week number.  See Clock::updateDate() and config.UpdateBin(); etc.  Hack the bin calcs out (to make room!) and add your own week number calc -- get the date, add up the days in past months, and days into current month, divide by 7.  The display currently shows 1 digit but you could add a second

Hi Mark, thanks for sharing this project. I have done it and the animations are really great ! But one thing is fore me not clear: per day the clock went plus ore minus more than 1 minute (depend only from the Arduino board), the DS3231 doesn't matter. I also have tried different. Normally  the DS3231 has a aberration from about 1-2 sec. /month. Do You have any notions ?

Well if you're checking the minute roll-over against another reference you will see some variation, although not a whole minute.  Look at Clock::CheckUpdate().  It only goes to the clock module to pull off the time every 20s or so, and then only updates if the minute has changed. You could try changing checkTimeDuration in Clock.h to say 1000 (1sec) to see if that makes a difference.  If you really care about precise display you could comment out the if (RTC::CheckPeriod...) entirely.

Have already compiled my sketch, so far so good. My rela time clock os one like this one:

my gyroscope is this one::

Should that work on your FLipClock or so I need to do some ajustments on the sketch?

I intend to do first an experimental assemble in a breadboard and then, if that's OK will do some welding .

Also I want to know how I can disable the DST as for the first year in many it was decided that we won't have DST this year.

Sorry for the long list of questions but your project is super!

It looks like that RTC has a different I2C address.  You will need to change

No idea about the gyro.  What is that for?  You won't have room for any additional code to interact with it.  My clock does not use a gyro

Re daylight savings.  The code currently only handles New Zealand and USA.  You can define your own table of on/off dates, or disable it by commenting out the

Thanks a bunch! Will never spot the change of IDC address. that's a feature not a bug! :-)

Where may I found the schematic.

Well there's not much to it, it's shields, two buttons and an RTC.

But "PINS.h" in the sketch zip file has an ASCII-art schematic of a sort

Where did you source the plexiglass?

I use Ponoko to do the laser cutting, they provide the materials too.

oh thank you Mark. I havn’t Understand the data pins part and I need to shop a compatible display . By the Way, your 8x8 matrix clock is also a nice project. Using a gyro to change the display is smart !

Hi Mark ! Really nice rendering. I was wondering if you can share the display reference for wiring. I see the pin.h file but not able to find the correct pin... many thanks

Thanks. Which pin can't you find?

let me know if this helps!

An alarm clock that simulates a bomb, with countdown and beeps.
Project Owner Contributor

This project supplements the existing cruise control in a vehicle, allowing you to automatically set the cruise control to a selected speed.
Project Owner Contributor

A program was created to display a digital clock in a KIM Uno. #IStandWithAhmed
Project Owner Contributor